Methods: This review is based on pertinent publications retrieved by a selective literature search, with particular attention to meta-analyses, randomized controlled trials, and the German and European angiological guidelines.

Results: Diabetes mellitus and nicotine abuse are the main risk factors for lower limb PAOD. The evidence for the efficacy and safety of antithrombotic treatment in patients with PAOD is limited, in particular, after surgical or endovascular revascularization. Intensifying antithrombotic treatment with stronger antiplatelet therapy (APT), dual antiplatelet therapy (DAPT), or antiplatelet therapy combined with anticoagulation lowers the rate of peripheral revascularization (relative risk [RR] 0.89; 95% confidence interval [0.83; 0.94]), amputation (RR 0.63; [0.46; 0.86]), and stroke (RR 0.82; [0.70; 0.97]) but raises the risk of bleeding (RR 1.23; [1.04; 1.44]). Predictors for peripheral vascular events include critical limb ischemia and having previously undergone a revascularization procedure or an amputation.

The importance of peripheral arterial occlusive disease (PAOD) is growing by virtue of its increasing incidence. Furthermore, recently published studies have drawn attention to the poor prognosis of patients with PAOD with regard to vascular events affecting the limbs as well as cardiovascular events.

Chronic critical limb ischemia (CLI) is associated with a poor prognosis. A systematic review found higher overall mortality (relative risk [RR] 2.26, 95% confidence interval [1.77; 2.89]) and a higher rate of amputation above the ankle (major amputation) (RR 3.85 [2.52; 5.87]) in patients with CLI than in patients with a lowered ankle-brachial index (2). After a major amputation, only 18–39% of patients with a prosthesis could walk around their household (3). A meta-analysis of predominantly retrospective cohort studies found 1-year mortality of 24–48% (4). Major adverse limb events (MALE) comprise:

Antithrombotic treatment comprises administration of antiplatelet therapy (APT) and anticoagulants. As shown in a recent meta-analysis of RCT, intensification of antithrombotic treatment leads to reductions in the rates of amputation (RR 0.63 [0.46; 0.86]) and peripheral revascularization (RR 0.89 [0.83; 0.94]) over a 24-month period compared with APT alone. The stroke rate was lowered (RR 0.82 [0.70; 0.97]), but the risk of myocardial infarction was not decreased (RR 0.98 [0.87; 1.11]). The intensification, comprising combination of an anticoagulant and APT, dual antiplatelet therapy (DAPT), or an alternative form of APT, led to a significant increase in major bleeding events (RR 1.23 [1.04; 1.44]) (9).

The dual aim of this review is to show how patients with a high risk of ischemia can be identified and also to present the contradictions to intensified antithrombotic treatment. We investigate what form of antithrombotic treatment is indicated following revascularization and examine the application of new treatment protocols and the associated practical restrictions on daily life (Table 1).

The guideline recommendations of the relevant European and German professional societies are critically reviewed (10, 11, 12, 13, 14). Moreover, the PubMed database was searched for systematic reviews, meta-analyses, and RCT using the keywords “peripheral artery/arterial disease” and “antithrombotic therapy” or “anticoagulation” or “antiplatelet.” Studies of primary prevention and treatment of ALI were excluded from analysis.

Antithrombotic treatment is one of the cornerstones of conservative treatment of PAOD. The relevant German clinical practice guideline recommends inhibition of platelet aggregation with acetylsalycylic acid (ASA) or clopidogrel for secondary prevention of cardiovascular events (12). The guidelines of the British National Institute for Health and Care Excellence (NICE) and the European Society of Cardiology prefer clopidogrel to ASA (10, 13). The CAPRIE study showed that clopidogrel was superior to ASA with regard to MACE risk reduction (RR 0.76 [0.64; 0.91]), although the finding resulted only from a subgroup analysis and the absolute risk reduction (ARR) was low (ARR 1.2 %, number needed to treat [NNT]) 87 over 3 years) (15). The recommendation of the German clinical practice guideline, in which there is no general preference for clopidogrel, is thus comprehensible.

Symptomatic PAOD exists in the presence of intermittent claudication, pain at rest, or an ulcer or gangrene (12). There is no consensus on whether to use APT in asymptomatic PAOD. The German guideline highlights the lack of evidence, but justifies its recommendation of APT by reference to the high rate of accompanying silent CHD. The ESC guideline recommends no APT for asymptomatic PAOD, pointing to the lack of evidence and the elevated bleeding risk (10, 12). A recently published meta-analysis showed a minor clinical benefit only for non-fatal stroke (reduction of 5 events per 1000 patients [0; 8], p = 0.055), with a significantly elevated risk of major bleeding (increase of 4 events per 1000 patients [1; 8], p = 0.009) (16). These new data support the ESC recommendation not to use APT in asymptomatic PAOD.

In a network meta-analysis, DAPT with clopidogrel and ASA led to no significant reduction in MACE compared with ASA treatment, but increased significantly the risk of bleeding (RR 2.29 [1.58; 3.44]). There was an isolated finding of a non-significant trend towards a lower amputation rate with DAPT (RR 0.68 [0.43; 1.04]) (17).

Treatment with a combination of low-dose rivaroxaban (2 × 2.5 mg/day) and ASA (100 mg/day) is recommended for PAOD patients without high bleeding risk or other complications in the guidelines of the European Society of Vascular Medicine (ESVM) (11). The NICE guidelines recommend this form of treatment for patients with a high risk of ischemia, provided the bleeding risk is determined, benefits and risks are analyzed and discussed with the patient, and regular re-evaluation takes place (14).

The NICE recommendation on this combination therapy is more complex, in that besides benefit/risk assessment, it includes patient adherence and stipulates regular re-evaluation.

Diabetes mellitus is one of the most important risk factors for the development of PAOD. The extent to which diabetes worsens the prognosis of PAOD patients is frequently underestimated: the 5-year survival rate for ischemic diabetic foot syndrome is 50% (21).

Analysis of real-world data from a German health insurance provider revealed higher mortality and a higher amputation rate among 21 197 hospitalized patients with PAOD and diabetes than in PAOD patients without diabetes (HR 1.26 versus 2.238, p < 0.001). These risks were higher again in the additional presence of CHD (HR 2.19 versus 1.76, p < 0.001) (22).

Only 25% of patients with diabetes and PAOD notice clinical symptoms due to concomitant neuropathy, so the PAOD is first recognized at the stage of critical limb ischemia or diabetic foot syndrome (23).

In the POPADAD study, APT in patients with diabetes and asymptomatic PAOD yielded no benefit with regard to MACE, major amputations, and critical limb ischemia (HR 0.98 [0.76; 1.26]) (15). Therefore, the presence of diabetes does not influence the recommendation not to perform APT in asymptomatic PAOD.

The joint guideline of the ESC and the European Association for the Study of Diabetes (EASD) recommends the combination of low-dose rivaroxaban and ASA for patients with diabetes and PAOD who are not at high risk of bleeding (24). In a position paper of the German Diabetes Society (Deutsche Diabetesgesellschaft), the German Society for Angiology (Deutsche Gesellschaft für Angiologie), and the German Society for Interventional Radiology (Deutsche Gesellschaft für Interventionelle Radiologie), this treatment is recommended only for patients with diabetes who are at high risk of ischemic events (23).

The ESC/EASD recommendation seems more generous than the German position paper, because it does not take the risk of ischemia into account.

Treatment in the presence of alternative indications for anticoagulation

PAOD is often accompanied by atrial fibrillation, particularly in the elderly. In the REACH registry, 10% of the patients with symptomatic PAOD had atrial fibrillation (6). The evidence for the efficacy and safety of antithrombotic treatment in this scenario is limited. The combination of anticoagulation and APT significantly increases the risk of bleeding. In a Danish registry study, the risk of severe hemorrhage was increased by 50% (HR 1.50 [1.23; 1.82]) and 84% (HR 1.84 [1.11; 3.06]), respectively, by treatment with ASA or clopidogrel in addition to anticoagulation (26).

In the ESC guideline, usually no accompanying APT is recommended for patients with indications for anticoagulation. Only if the risk of ischemia is high can combination treatment with anticoagulants and APT be considered. By definition, the ischemia risk is high with prior stent thrombosis or ALI, as well as in the presence of a cardiological indication for APT (10).

A meta-analysis of RCT showed that in PAOD patients with atrial fibrillation, the efficacy of non-vitamin-K-antagonist oral anticoagulants (NOAC) resembles that of warfarin for the MACE endpoints (27):

Assessment of risk of bleeding versus ischemia

Antithrombotic treatment is inherently associated with an elevated risk of bleeding, so the danger of ischemia must be assessed in each individual case. Alongside the cardiovascular risk, there is also the extremity-related risk of ischemia, with the prognostically relevant endpoint of major amputation.

No validated score exists for assessment of the bleeding risk in PAOD, so individual criteria have to be considered. The situation is aggravated by the fact that some factors (e.g., age and renal failure) increase both the risk of bleeding and the danger of ischemia (28). The Box contrasts the criteria.

The offsetting of safety and efficacy endpoints in clinical studies as clinical net benefit is questionable in practice: gastrointestinal (GI) bleeding events, unlike cerebral apoplexy, myocardial infarction, or amputation, are frequently not associated with permanent impairment, and the risk of GI bleeding during DAPT can be lowered with a proton pump inhibitor (11, 29). In contrast, more weight should be attached to increased risk of intracranial or intraocular bleeding or hemorrhagic stroke because of the irreversible damage they often entail. In patients who are predisposed to such events, the treatment of arterial hypertension or diabetes should be optimized (30, 31). The Figure shows a proposed algorithm for use in daily routine.

Licensing studies for medical products often differ in the type and duration of antithrombotic treatment (32). A standardized scheme is needed to minimize confounding effects.

It remains unclear whether the strategy of combining low-dose rivaroxaban and ASA can be extended to other membes of the NOAC group of substances. There has also been no comparison with clopidogrel monotherapy. The exclusion criteria applied in studies of combination treatment (especially elevated bleeding risk) mean that their results cannot be transferred unreservedly to routine practice (33). For example, combination therapy is contraindicated in the presence of (34):

The COMPASS study was terminated prematurely because the combination therapy was beneficial. The mean observation period was therefore only 23 months. No long-term real world data are yet available for this treatment option. Regular re-evaluation capable of capturing temporary changes in bleeding risk and renal function is thus advisable.

Patients with PAOD are at high risk of ischemic events. Use of the term “stable PAOD” induces a false sense of security. Cardiologists have revised their terminology for this very reason: they now speak of “chronic coronary syndrome” rather than “stable CHD.” Analogously, the term “chronic” PAOD is more apposite and better respects the reduced prognosis of these patients.

Antithrombotic treatment for asymptomatic PAOD cannot be recommended, because there is no evidence of clinical benefit but the risk of bleeding is elevated. This also applies to patients with diabetes mellitus.

The preference for clopidogrel over ASA is based mainly on the statistically controversial subgroup analysis in the CAPRIE study and is also questionable in view of the low absolute reduction in risk (NNT = 87 over 3 years).

The last-named are predictors of peripheral ischemic events and should prompt the question of whether it is necessary to intensify the antithrombotic treatment. Patients with high risk factors are those who will probably have the highest absolute benefit (14).

Treatment with a combination of low-dose rivaroxaban and ASA reduces rates of MACE and MALE, so this option should be considered in cases of high ischemia risk and low bleeding risk.

There are no standardized specifications for the regular re-evaluation of antithrombotic treatment. In our opinion, it is advisable to review the situation 4 weeks after the commencement of intensified treatment and then at least 6-monthly as well as after any bleeding events. The intervals should be shorter for patients with renal failure, advanced age, and comorbidities.

DAPT can usually be ended 4 weeks after revascularization, as can accompanying APT in cases where anticoagulation is indicated.

Before any escalation of secondary prevention drug therapy, all non-pharmacological measures, such as cessation of smoking and exercise therapy, should be exhausted. Optimal control of the cardiovascular risk factors should be a precondition.

Intensification of antithrombotic treatment has the potential to prevent ischemic events, but each individual case must be judged on its merits. This form of treatment is not suitable for all patients with PAOD. 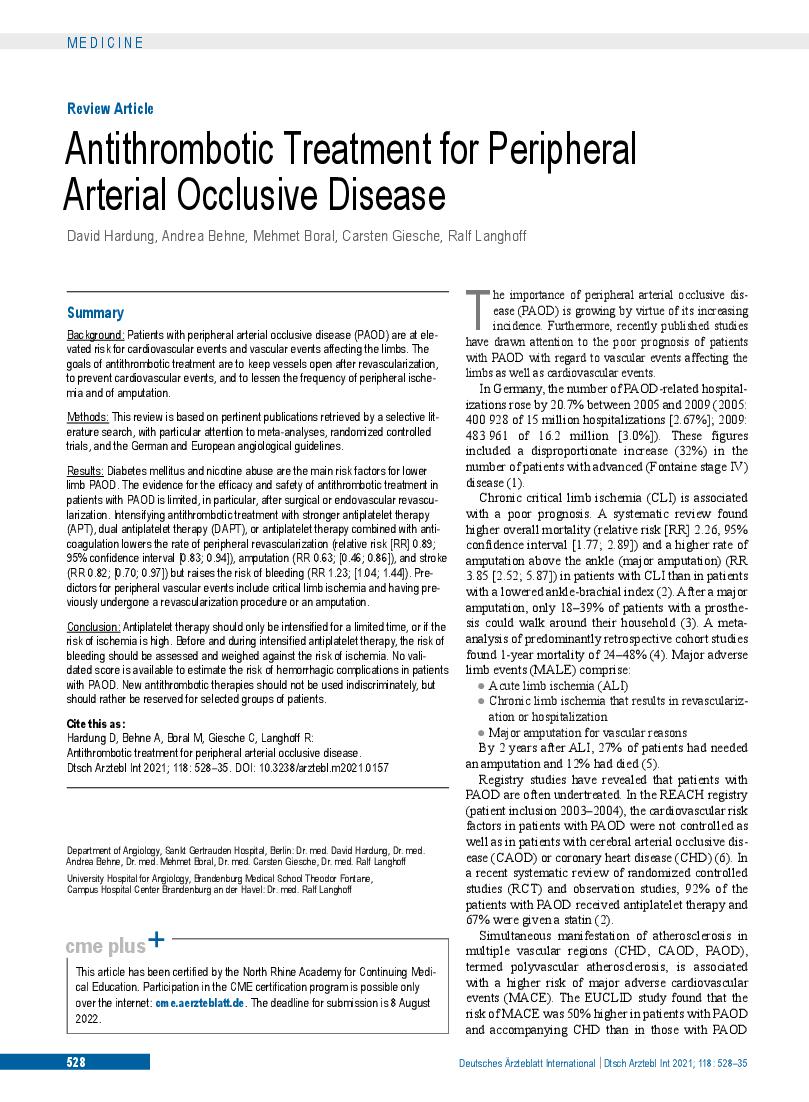