The term “zoonosis” usually designates infectious diseases that can be transmitted from animals to man. Yet antibiotic resistance, too, can originate in animals and be transmitted to man, complicating the therapeutic use of antibiotics in human medicine. This problem is best addressed by a one-health approach, in which the use of antibiotics in human beings, domestic and farm animals, and their ecosystems is taken into account, so that overall control strategies can be developed to prevent the further spread of antibiotic resistance (1, 2).

In a review article in this issue, Köck et al. discuss the frequency, sources, and significance of transmission of multiresistant Gram-negative bacteria between animals and human beings, in Germany and worldwide (3). The steady rise of such pathogens, including, for example, third-generation cephalosporin-resistant (3GCR), carbapenem-resistant, and colistin-resistant Escherichia coli (E. coli) bacteria, has already placed a considerable burden on our health-care system (4).

Many of the studies discussed by Köck et al. were carried out in the Netherlands: a country with excellent infectious disease prevention in human medicine, yet in which large amounts of antibiotics were used in food-producing animals until just a few years ago. These studies yielded contradictory evidence. A Dutch study published in 2011, for example, revealed that 3GCR E. coli isolates from human patients and from poultry contained not only the same resistance genes, but the same bacterial strains occurred as well (5). When these same isolates were studied again a few years later with whole-genome sequencing, the strains from human patients and from poultry turned out, in fact, to be distinguishable, owing to the higher resolution of the new method. This newer study also revealed, however, that isolates from patients, poultry, and pigs contained identical plasmids—mobile genetic elements on which resistance genes are passed from one bacterial strain to another (6). Besides facilitating the exchange of resistance genes between bacterial strains, these mobile genetic elements also make it much more difficult to study the spread of antibiotic resistance epidemiologically, even with up-to-date molecular-biological techniques.

In view of this situation, Mughini-Gras et al. (7) took a very interesting new approach. Their modeling study, which appeared in 2019, made use of data published in the Netherlands for the years 2005–2017 regarding 3GCR genes in E. coli bacterial isolates from human beings, domestic and farm animals, animal feed, superficial fresh water, and wildfowl. There were 1220 isolates of human origin (including from members of high-risk groups, such as returning travelers, hospitalized patients, and farmers) and 6275 isolates of non-human origin. The population-based probability of exposure was also considered. It was found that most acquisitions of3GCR E. coli bacteria by the normal human population were attributable to person-to-person transmission within or between households (60.1%), or to secondary transmission via contact with persons in the high-risk groups mentioned above (6.9%). Contaminated food accounted for ca. 18.9%, contact with pets for 7.9%, contact with farm animals for 3.6%, and swimming in superficial fresh water and contact with wildfowl for 2.6%.

Not enough data on some questions

Köck et al. (3) conclude, as others have concluded, that although multiresistant Gram-negative pathogens are present in both animals and human beings, the zoonotic transmission of 3GC- and carbapenem-resistant entero-bacteria plays a minor role. In their view, not enough data are available to support any conclusion on plasmid-coded colistin resistance of the mcr type. Although screening tests performed in the German Zoonosis Monitoring Program revealed the mcr-1 resistance gene in up to 10% of E. coli isolates derived from poultry or poultry meat (8), it has only been found in rare isolates from human patients to date (9).

These findings do not in any way lessen the need for a one-health approach in the fight against antimicrobial resistance. As long as infections due to multiresistant Gram-negative pathogens place a burden on the health-care system, and as long as the same antimicrobial substances are used in both veterinary and human medicine, generating transmissible forms of resistance, there will still be a need for holistic, intersectoral control strategies to combat infectious disease and antimicrobial resistance. The matter must be considered not just in the local setting, but from a global-health perspective as well: in particular, the presence of multiresistant pathogens and the use of antibiotics in food production now vary widely from one country to another around the world (10). It is not for nothing that Köck et al. repeatedly designate foreign travel as a risk factor for the acquisition of multiresistant Gram-negative pathogens.

As the current SARS-CoV-2 forcefully reminds us, infectious pathogens and antimicrobial resistance know no borders. 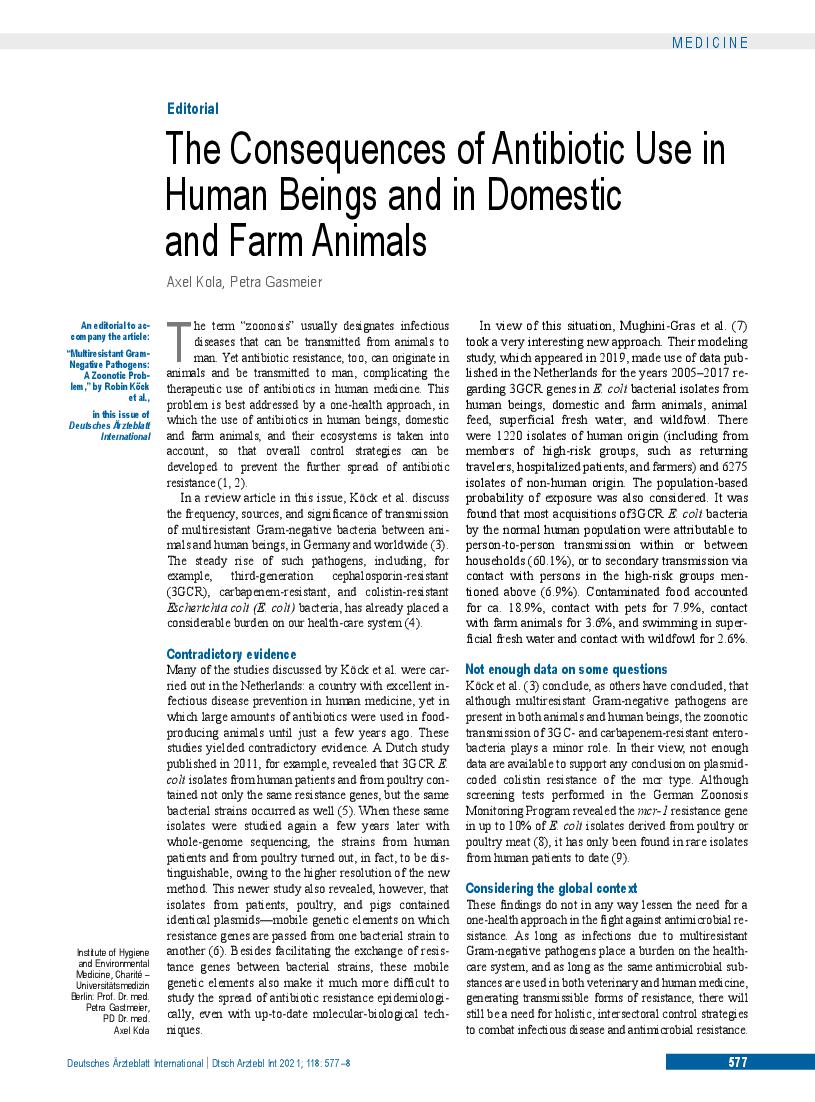