Results of the Longitudinal Study “Kinder in Deutschland – KiD 0–3”

The following analyses are based on a longitudinal survey of N = 909 parents. The fathers or mothers had participated in the representative main study (T1) “Kinder in Deutschland – KiD 0–3“ in 2015 which was conducted during the U3–U7a child development checks in pediatricians’ practices across Germany; 8063 families participated in the main study. Subsequently, they contributed to the follow-up study (T2) in 2017 in which the written questionnaire was mailed to 1625 families willing to participate again in the survey.

The questionnaire, which was used at both survey dates, collected data on various measures of stress on the child, parent and family levels (2). At T2, 804 parents additionally completed a questionnaire on child development (German version of the Ages & Stages Questionnaire, “FKE 0–5”; [3]). The statistical analysis comprised frequency tables and significance tests; missing values were excluded.

In the period between T1 and T2, the families reported a greater number of separations and a trend towards starting new relationships. In existing partnerships, partnership dissatisfaction increased from 8.2% to 11.2%. Parenting stress increased with regard to doubt about parenting competence (T1: 32.0%; T2: 36.8%) and social isolation (T1: 29.1%; T2: 35.3%), whereas lack of empathy towards the child was reported less frequently (T1: 16.1%; T2: 12.2%). Parent-reported negative emotionality of the child (for example, frequent tantrums) increased from 3.6% to 5.6% (Table 1). Frequent loud arguments in the partnership, constraints due to parenting role, tendency to get angry, as well as signs of depression or anxiety symptoms of the parents remained stable over time (not depicted). When adding up the stress characteristics mentioned, an increase in the proportion of families with three or more stress characteristics from 27.7% (95% confidence interval: [24.4; 31.1]) to 32.2% [28.8; 35.7] was noted.

In the self reports, 30.6% of parents reported values that were suspicious or required monitoring in at least one development area (problem-solving skills, communication, gross motor skills, fine motor skills, social development). Bivariate analyses showed that at T2 parents more frequently assessed their child’s development as delayed in all areas if at T1 subjective stress was reported due to regulation problems of the child (with regard to crying, sleeping or eating behavior) (n = 132). These differences were especially striking with regard to development of fine motor skills (no stress: 7.0%; stress: 15.9%) and social development (no stress: 9.2%; stress: 14.4%). Almost 40%, and thus 11.1 percentage points more than parents without subjective stress at T1, reported developmental delays in their children in at least one area (Table 2). In-depth analyses found significant differences for the crying behavior (frequency at T1: 11.1%) and eating behavior (4.0%) of the child in at least one area of development, whereas two years later only a trend towards more frequent delay was observed for sleeping behavior (9.8%).

Table 2
Child development depending on subjective stress of the parents due to regulation problems of the child (crying, sleeping, or eating behavior) in column percentages, chi-square test/four-fold contingency table (n = 733)
Enlarge All figures

Our analyses confirmed the cross-sectional observation from the main study (2) that psychosocial stress in families increases with increasing age of the child. This may be related to increasing parenting challenges in the toddler age (“terrible twos”) (4) as well as changes in the living conditions, such as birth of another child or return to work.

Overall, one third of the children show at least one developmental delay, a finding that is in line with other study results of a sample of 3 to 6 year olds (5). Children of parents who felt stressed by regulation problems two years ago apparently do not develop in an age-appropriate manner, according to reports of the parents. This highlights the significance of subjective stress resulting from regulation problems of the child. It is conceivable both that regulation problems lead to stress among parents and that stressed parents are more sensitive to potential developmental delays (4). Multifactorial analyses with additional predictors are being sought.

As continuous contacts, pediatricians are well able to evaluate delays in the child as well as stressful circumstances of the parents (1) and refer them early to suitable support services, such as Early Childhood Intervention (“Frühe Hilfen”) or counselling on parenting issues.

Collectively, the data indicates a need for preventive measures in families experiencing psychosocial stress. However, attrition bias with regard to level of education and receipt of social welfare benefits as well as the low sample size with regard to developmental delays are limitations of the longitudinal study. In view of the SARS-CoV-2 pandemic, the increase in family stress under normal circumstances, i.e., as in the time before the pandemic, should be taken into account.

Acknowledgement
The KiD 0–3 study is a team effort with the further collaboration of Christian Brand, Andreas Eickhorst, Birgit Fullerton, Katrin Lang, Christoph Liel, Simon Lorenz, Daniela Salzmann, Alexandra Sann, Andrea Schreier, Carolin Seilbeck, and Sabine Walper at the German Youth Institute (DJI) in Munich as well as Anna Neumann and Ilona Renner in the Federal Centre for Health Education (BZgA) in Cologne. We would like to thank them all for their support and the families in this study for their readiness to provide information.

Table 2
Child development depending on subjective stress of the parents due to regulation problems of the child (crying, sleeping, or eating behavior) in column percentages, chi-square test/four-fold contingency table (n = 733)
Enlarge All figures
Stability and Change in Self-Reported Psychosocial Stress... 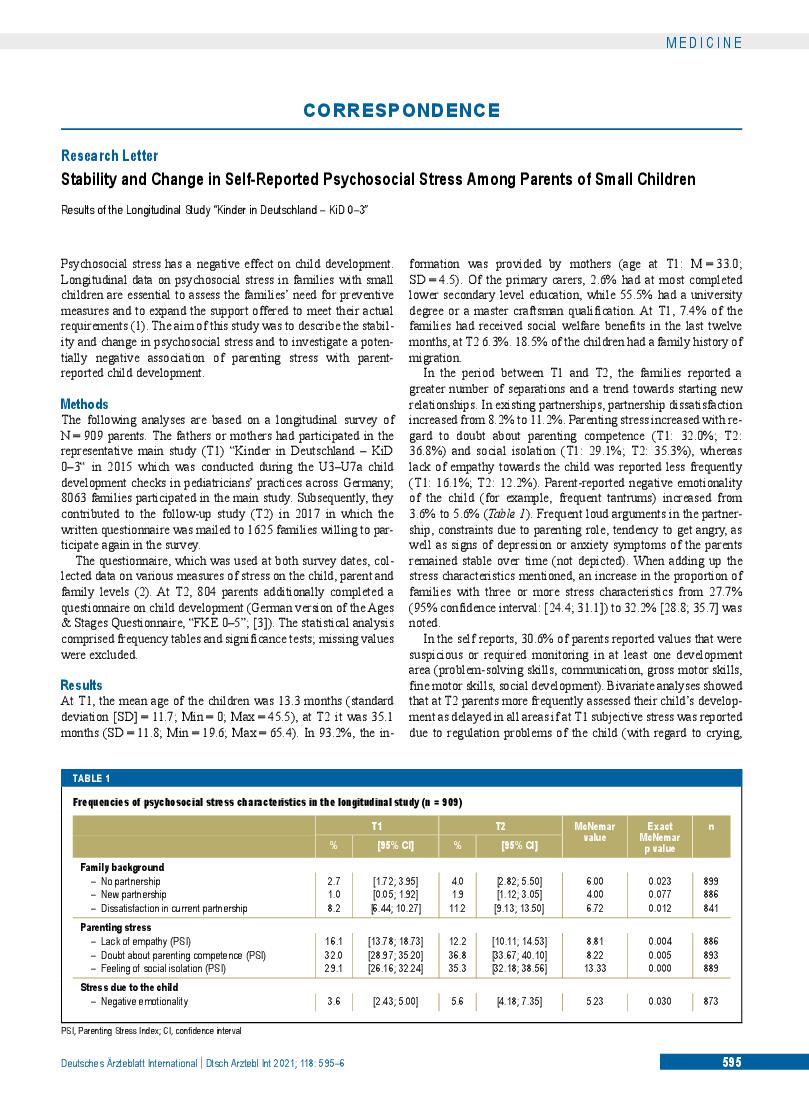