We thank your correspondents for their interest and the resonance triggered by our article (1).

We wish to discuss the importance of surgical and interventional treatment methods using thoracic sympathicolysis, as raised in several comments. The evaluation of surgical approaches to the treatment of Raynaud’s phenomenon (RP) was included in our manuscript. As suggested by the editors, however, we limited ourselves to general and medication based treatment methods, especially as international guidelines are unequivocally opposed and dismiss any surgical or interventional therapeutic approaches outside the context of controlled clinical trials (2). The background to this recommendation is heterogeneity of the data, occasional serious flaws in the study methods, and the low evidence levels—which cannot be disguised by the cited literature—especially as it consists of a heterogeneously collated miniseries or methodologically problematic reviews that have obviously been subject to duplicate publication (3, 4, 5).

We are grateful to our correspondents, however, for raising the topic, since we are inclined to a more differentiated perspective as regards thoracic sympathicolysis. The problems start with the correct categorization of the patients whose data were summarized in the published case series and meta-analyses into primary and secondary RP—a category decision that—as we explained in our article—crystallizes only after several years. Furthermore, many surgeon-authors are obviously not able to distinguish between manifest permanent acral ischemia (with or without additional RP) and intermittent vasospasms in the context of RP. Furthermore, it is not even standardized how a procedure is undertaken (level, extent, method used to block the nerve trunk). Even if one accepts the often dubious classification of patients in the cited reviews and ignores the often lacking objectivity of reported treatment success (Raynaud diary, Raynaud’s condition score, quality of life instruments), the therein reported long term benefit of thoracic sympathicolysis in primary RP shrinks to 50% (4). In our own experience this proportion is actually much lower, and we therefore generally advise against thoracic sympathicolysis in patients with primary RP of in unclear cases, in agreement with the already cited guideline (2).

The picture is entirely different in patients with secondary RP if they present—in the context of acral vascular occlusion—with critical hand-finger ischemia with or without digital ulcerations or onset of gangrene, which have not improved despite maximal conservative treatment. Conservative therapies include passively keeping the area warm, adequate analgesia, iloprost infusions, and if needed additional vasodilatation, provided this does not lead to a steal effect. In such cases we have had positive experiences with additional video assisted thoracic sympathicolysis, which objectively improved acral perfusion, alleviated resting pain, and was able to support the healing of digital ulcerations. In this setting long term effects are not the key—the priority is to improve acral ischemia in the short and medium term in order to alleviate resting pain, stimulate wound healing, and enable risk-free microamputations. For all their methodological shortcomings, the cited reviews point in the same direction (3, 4). This approach is no longer intended to treat the RP but aims primarily to improve the critical acral ischemia.

We indicated in our article (1) that RP can in rare cases also affect other acral sites. Such rare manifestations include its occurrence in the breast nipples. The comment of Ms Koschinski-Möller, for which we also explicitly thank her, describes the phenomenon and potential effects and treatment options satisfactorily and should prompt attention from gynecologists and obstetricians. 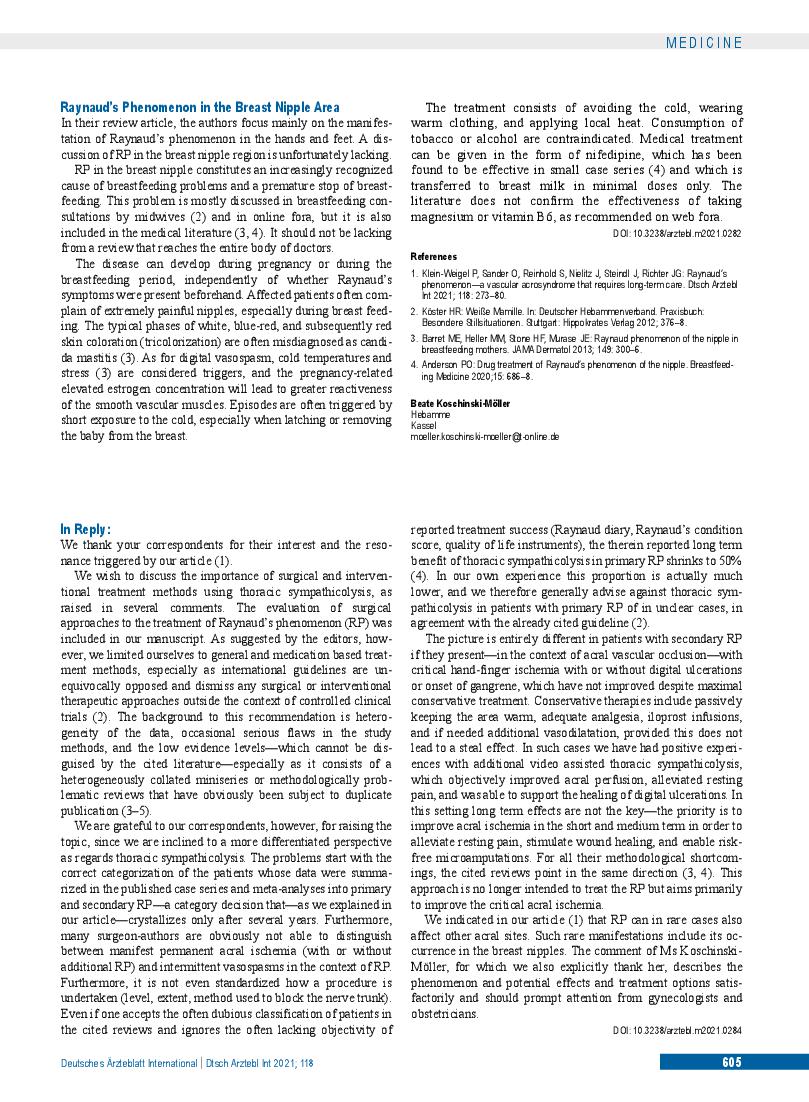