As one of the authors of the only recent evidence based German guideline on thrombocyte aggregation inhibition please allow me to express my irritation, the recommendations of the European Society of Cardiology are used in a one-sided manner as basis of a CME article that has the nimbus of objectivity (1). To put it mildly, the ESC guidelines were developed in close proximity to industry and their methodological quality is highly disputed. (2). They do not meet the scientific criteria of the Association of the Scientific Medical Societies in Germany.

The guideline of the German College of General Practitioners and Family Physicians (DEGAM) (3), which I was also involved in developing, was briefly referred to as “outdated” by the authors. But every single study cited by the authors was extensively discussed in our guideline. The cited studies RE-DUAL-PCI, PIONEER-AF, AUGUSTUS, and ENTRUST-AF—which are without exception methodologically deserving of criticism—were designed with the safety endpoint bleeding. It should be borne in mind that in the comparison groups with triple therapy with warfarin, the target international normalized ratio (INR) was 2.0–3.0, not 2.0–2.5 as recommended by all international guidelines. The comparison treatment therefore did not meet the current standard—which with regard to bleeding complications is an unfair comparison to the detriment of warfarin.

The cited studies were able to assess whether the prevention of thromboembolic events was equally effective for the combination of direct oral anticoagulants (DOACs) with clopidogrel as for triple therapy with warfarin (the trend showed partly opposing signals).

In our opinion, triple therapy using acetylsalicylic acid (ASS), clopidogrel, and vitamin-K antagonists should continue to be considered the standard in treating anticoagulated patients with acute coronary syndrome. It goes without saying that this treatment—depending on the individual risk of bleeding and thromboembolism—should be given for the shortest necessary period, and subsequently the patient should be switched to clopidogrel and a vitamin-K antagonist for up to 12 months. It also goes without saying that during triple therapy, the INR should not exceed 2.5. 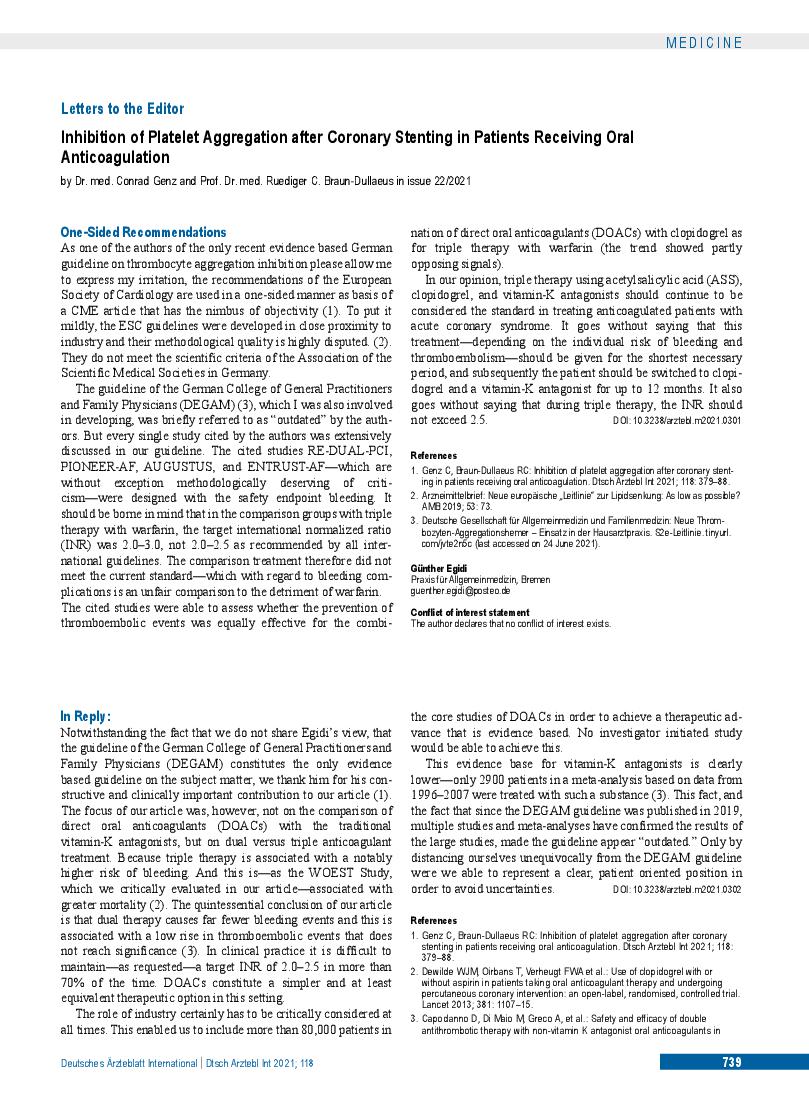