Influenza Vaccination in Patients With Dementia and Parkinson’s Disease

In aging societies, the prevalence of classic age-related illnesses such as neurodegenerative diseases is steadily increasing. The aim of the study was to investigate the vaccination coverage against seasonal influenza in vulnerable individuals with the two most commonly occurring neurodegenerative diseases, namely dementia and Parkinson’s disease, which are known to have higher morbidity and mortality in the event of influenza infection (1, 2). Furthermore, we explored whether dementia and Parkinson’s disease are associated with a higher likelihood of influenza vaccination, taking account of institutionalization and care status.

We used longitudinal health claims data of the largest statutory health insurance fund in Germany, the Allgemeine Ortskrankenkassen (AOK), with 1 130 857 observations from 245 125 individuals aged ≥ 50 years during the period from the third quarter of 2014 to the second quarter of 2019.

The outcome variable was influenza vaccination. The principal explanatory variables were the presence of a valid diagnosis of dementia or Parkinson’s disease. A valid diagnosis had to be confirmed by a second diagnosis by another physician or over time. We explored the moderating effects of institutionalization (living in a nursing home versus living in a private household) and care status (presence or absence of severe care dependency), with severe care dependency defined as care level 3 (up to the end of 2016) or care grade 5 (from 2017 onwards). The control variables were sex, age, region of residence (eastern/western Germany), and 31 dichotomous comorbidities from the Elixhauser comorbidity index, with a score of 1 for each comorbidity present. We explored the influenza vaccination coverage rates and applied the generalized estimating equation (GEE) approach for the binary outcome variable influenza vaccination. The estimated odds ratios (OR) display the adjusted chance of influenza vaccination. All analyses were performed using STATA/MP 16.1.

The vaccination coverage rates were higher in patients with dementia (50.4%) and Parkinson's disease (49.7%) than in patients without these conditions (no dementia: 30.8%; no Parkinson's disease: 32.1%), but about half of the patients were still unvaccinated (Table). Adjusted for the influence of the control variables specified above, the presence of dementia even decreased the likelihood of vaccination (OR 0.95, 95% confidence interval [0.94; 0.97]), whereas individuals with Parkinson's disease had an increased likelihood of being vaccinated (OR 1.12 [1.09; 1.16]). In a sensitivity analysis, in which we refrained from a validated dementia diagnosis, we observed an OR of 0.97 [0.95; 0.99] for dementia. Nursing home residents generally had a higher likelihood of vaccination (OR 2.14 [2.09; 2.19]) while severe care dependency decreased the likelihood (OR 0.79 [0.76; 0.82]).

Although influenza vaccination is associated with decreased overall mortality in older multimorbid population groups (3), our study has shown that the vaccination rates in Germany generally fail to reach the levels targeted and are also lower than in other European countries (4). The adjusted likelihood of vaccination is decreased among dementia patients living in private households, despite the recommendation that dementia patients should also be vaccinated. Similar findings have been reported for England and Wales (5). Patients with Parkinson's disease generally have a higher chance of being vaccinated, but this advantage is lost once they become severely dependent on care. In Germany, patients with dementia and Parkinson's disease are predominantly cared for informally by their families. This care is physically and mentally demanding and often results in poor health for caregivers, which may have a negative effect on their ability to seek vaccination for their dependent relatives. Vaccination rates are higher in nursing homes, where medical care is formally organized.

The excessively low influenza vaccination rates for patients with dementia and Parkinson's disease living in private households puts them at higher risk of infection and a severe disease course. The high mortality among the elderly population in the first two waves of the COVID-19 pandemic, particularly in nursing homes, highlighted the exposed situation of these groups with respect to infectious diseases and their endogenous resources to cope with these events. Inadequate protection in the annually recurring waves of influenza results in years of life being lost unnecessarily. These findings underscore the need for improved vaccination efforts by primary care physicians, specialists, or on the basis of a systematic intervention, similar to the COVID-19 vaccination programs, to protect patients, their families, and nursing staff.

A. Hermann and his working group are funded by the Hermann and Lilly Schilling Foundation for Medical Research in the Stifterverband (a joint initiative of German businesses and foundations that seeks to address challenges in higher education, science, and research). 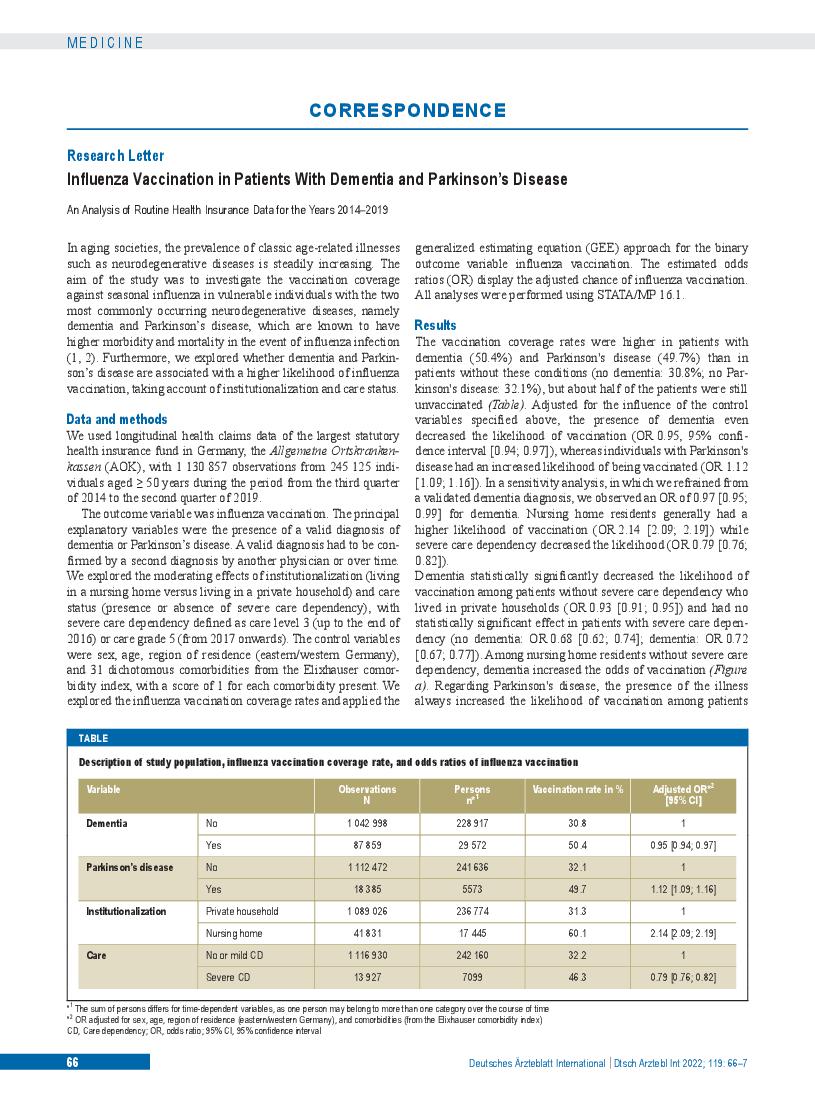