In the past 40 years, the function of an emergency physician working as a medical incident officer (MIO) has been implemented in many rescue service areas in Germany. The aim of this study was to examine the range of activities for a MIO within the Hamburg fire department, to compare the specifics with the recommendations of the German Medical Association (Bundesärztekammer, BÄK) for the qualification and training of MIOs, and to compare the classification of patients to the triage categories according to the current distribution key of the German Triage Consensus Conference of 2017.

Response missions of the Hamburg Fire Department that included a MIO from 1 September 1985 to 31 August 2021 were retrospectively evaluated for the following parameters: number of emergency calls, time of response (daytime [07:00 to 19:00] versus nighttime [19:00 to 07:00], staff allocation time), day of week, type of assignment, and number of patients (including deceased). The results were compared with the “Recommendations of the German Medical Association (Bundesärztekammer, BÄK) for the qualification of MIOs” (1).

Classification of patients to the triage categories, based on the STaRT (simple triage and rapid treatment) or the modified mSTaRT algorithm (2), was compared to the classification key of the German Triage Consensus Conference of 2017 (3).

Overall, 629 emergency calls were evaluated. The average frequency of responses over the entire study period was 1.5 responses per month, but this increased to 2.7 responses per month in the time frame of the past ten years. There were 387 emergency calls in the daytime (61.5%), and 209 in the nighttime (36.4%), with time of day unspecified for 13 cases. The median help time was 90.5 min (range 1 min to 2308 min, including false alarms). Most emergency calls (483; 76.8%) occurred on weekdays, with 146 (23.2%) occurring on the weekend. Almost a quarter of the responses (n = 152; 24.2%) involved fire incidents. Accidents involving buses (n = 45; 7.2%) together with other major road accidents (n = 36; 5.7%) made up the second largest group, with 81 responses (12.9 %) (Figure). In 184 cases (29.3%), the request for a MIO was canceled before the MIO reached the scene of the incident, or the MIO did not play an active role at the scene (in management and coordination of medical and/or organizational measures on-scene at the emergency, for instance, in triage).

With the exception of a situation of mass infection, all aspects of the subject areas mentioned in the curriculum of the BÄK can also be found in the operational reality in Hamburg.

During the study period, 3733 patients were triaged. Of these, 174 patients (4.7%; triage category [TC] I) had unstable vital signs, 325 patients (8.7%; TC II) were seriously injured or ill, and 3182 patients (85.2%; TC III) were slightly injured or ill. A total of 52 patients (1.4%) died during the response mission. The distribution of patients in the triage categories in the various types of response missions is shown in the Figure. The planning parameters based on the Triage Consensus Conference are 20%, 30%, and 50% for the TC levels I, II, and III, respectively; however, with the exception of police situations and road traffic accidents, the TC sizes in Hamburg showed lower-than-expected injury severity (3).

This work shows that a MIO is regularly dispatched in Hamburg. Compared to the first experience in Hamburg (4), the number of responses has increased over the past ten years. The reason for this could be the lowering of the emergency call threshold (from MCI-5 [MCI, mass casualty incident]). In contrast, an analysis of MIO responses in a southern German rescue service area (5) showed a frequency of only 1.25 responses per month. In Hamburg, fire incidents led most frequently to MIO responses, while major road traffic accidents were previously the predominate reason (4). This is consistent with the study by Beck et al. (5), which determined that fire incidents accounted for about half (52%) of all responses.

Our results show that the revisions made by the BÄK (1) in 2011 were expedient. A new edition should now be supplemented in the area of “infection situations”, as responses in this area in Hamburg now account for around 8% of the total responses (excluding false alarms). Although TC III patients predominate in this case, the extensive communication effort with clinics and/or the statutory health insurance providers for the admission and/or further care of patients—who may have to be isolated—is of particular importance.

The current planning parameters of the Triage Consensus Conference, of 20%, 30%, and 50% percent for TC I, II, and III, respectively (3), are shown in this work to be primarily true in the case of police situations and major road traffic accidents (excluding bus accidents) (Figure). For types of operations with fewer patients per TC than planned, this leads to a resource buffer that can be assessed as positive overall for dealing with the corresponding response missions. As Hamburg primarily has the specifics of a city-state, the establishment of a MCI register for the investigation of cross-state aspects should be supported.

In summary, there are regular indications (Box) for the use of a MIO in urban areas, and the curriculum of the BÄK reliably covers the list of indications for a MIO except for situations of infections. The determination of the 7th Triage Consensus Conference on the planning parameters for the TC is confirmed for the police situations and major road traffic accidents. For the other application scenarios, there are aspects that should be further discussed related to the determination of the planning parameters. The large proportion of cancellations requires a critical examination of the indication catalog.

Box
Indications for dispatching a MIO
Enlarge All figures

The study design was retrospective, and the data quality was heterogeneous. Persons who were slightly injured or ill could not be completely separated from other persons who were involved or affected (including non-injured or previously ill), for example during evacuations, so that some of these may have been attributed to TC III.

Box
Indications for dispatching a MIO
Enlarge All figures

Figure
Patient distribution (on average) to the triage categories in the respective damage situations
Enlarge All figures
Developments in the Range of Activities of Medical Incident... 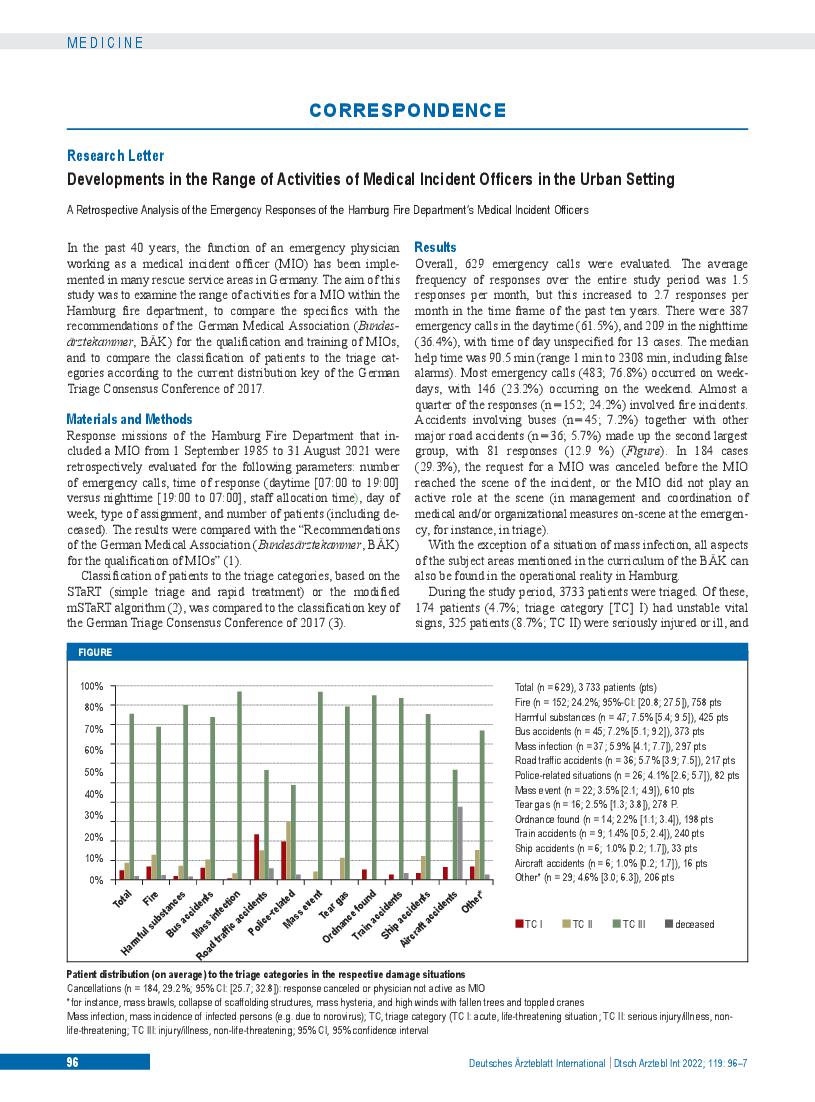