The Effectiveness of E-Cigarettes for Smoking Cessation

Background: Our primary aim was to assess—in the German population—the effectiveness of e-cigarettes (ECs; with or without nicotine), nicotine replacement therapy (NRT), and no use of evidence-based aids in smoking cessation.

Methods: Analysis of cross-sectional data from a representative survey of the population (age 14–96 years) conducted in 2016–2021. All current smokers and recent ex-smokers (< 12 months since quitting) who had made ≥ 1 attempt to quit in the past 12 months (n = 2740) were included. They were asked about use of cessation aids in their most recent quit attempt and their current smoking status.

Conclusion: In Germany, use of ECs in an attempt to quit smoking is associated with a higher rate of abstinence than attempting to quit unaided.

Medical guidelines recommend a range of evidence-based smoking cessation treatments (1), but only a minority of smokers in Germany use these (2). Electronic cigarettes (ECs) may be a useful alternative for quitting tobacco in smokers who do not want, or are not able, to use medically licensed treatments. ECs are currently the most frequently used quitting aid in Germany (2), which is remarkable, because their use is discouraged by medical associations (3). ECs are not without risk, but growing evidence suggests they are substantially less harmful than tobacco smoking (4, 5). ECs are tobacco-free devices that typically heat a liquid into an aerosol containing nicotine that is inhaled by the user. They therefore offer a mechanism of action similar to nicotine replacement therapy (NRT).

A Cochrane review found moderate-certainty evidence that nicotine ECs are more effective in helping smokers quit than NRT and non-nicotine ECs (6). Nevertheless, the recently updated German clinical guideline for smoking cessation does not recommend ECs; rather, the guideline merely states that the evidence on the efficacy and risks of ECs is inconsistent (1).

Further evidence on the effectiveness of ECs is therefore needed, both from clinical trials and from high-quality observational studies, particularly from Germany—a country with relatively high smoking prevalence (7), weak tobacco control (8), and a critical attitude towards ECs. In this context, it is important to investigate long-term use of ECs in successful quit attempts (i.e., ongoing exposure to addictive and potential harmful ingredients) and dual use of ECs and tobacco in unsuccessful attempts (i.e., exposure to two sources of harm). In addition, there is a need for further evidence on the effectiveness of non-nicotine ECs for smoking cessation, as the existing evidence is inadequate (9).

The overall aim of this study was therefore to compare—in the German population—the effectiveness of ECs, NRT, and no use of evidence-based support (i.e., unaided quitting) in quitting smoking. We chose NRT as comparator because it is the most frequently used pharmacotherapy in Germany (2). Other pharmacological and behavioral counseling treatments are used too infrequently to allow statistical comparisons with our current study data. The primary research question was: among past-year smokers who reported making a quit attempt in the last 12 months, do the odds of cessation differ between persons who used solely ECs (with and/or without nicotine), solely NRT, and no cessation aid?

A secondary research question was: do the results differ between the subgroups of those who reported using solely ECs with nicotine and without nicotine? A further secondary research question was: among persons who started a quit attempt more than 6 months ago and used ECs, does the prevalence of current EC use differ between those who were successful (i.e., the proportion of non-smokers who use ECs in the long term) and those who were unsuccessful (i.e., the proportion of smokers with dual use)?

We analyzed cross-sectional data from the German Study on Tobacco Use (DEBRA; Deutsche Befragung zum Rauchverhalten), an ongoing representative household survey on tobacco use in the German population (www.debra-study.info) (10). The study was registered at the German Clinical Trials Register (DRKS00011322, DRKS00017157) and approved by the medical ethics committee of the University of Düsseldorf (HHU 5386R).

The DEBRA study collects data every 2 months, each time from a new sample of 2000 persons aged 14 years or more, by means of computer-assisted face-to-face household interviews. From June/July 2016 to October/November 2021, respondents were selected through multistage, multistratified random probability sampling. Since January 2020, respondents have been selected using a dual frame design: a composition of random sampling and quota sampling. This change in design has been described in detail elsewhere (https://osf.io/s2wxc).

We selected all persons from the DEBRA database who had smoked tobacco in the previous 12 months with at least one serious attempt to quit (eMethods). We included all current smokers and recent ex-smokers who had used ECs or NRT to aid their quit attempt or who had tried to quit unaided (see below).

The respondents were shown a list of 20 cessation methods (eMethods). The following methods were defined as evidence-based according to the German guidelines (1, 11):

a) Brief advice from a physician

e) NRT without prescription (over the counter, OTC)

i) ECs without nicotine

Our primary outcome was cessation, defined as self-reported non-smoking up to the time of the survey in all current smokers and recent ex-smokers who reported a quit attempt during the previous 12 months (see eMethods for exact wording).

We registered a study protocol and analysis plan prior to analysis (https://osf.io/z59m4/). For the primary analysis, we calculated a multivariable logistic regression model with tobacco abstinence (i.e., non-smokers versus smokers at the time of the survey) as dependent variable and method of quitting (categorical: unaided, NRT, and ECs with and/or without nicotine as reference group) as independent variable, adjusted for all confounders. In the event of non-significant results of the primary analysis, we had planned to calculate the Bayes factor (see study protocol).

For secondary analysis 1, we calculated a multivariable logistic regression model with tobacco abstinence (i.e, non-smokers versus smokers at time of survey) as dependent variable and quitting method as independent variable (categorical: ECs with nicotine, ECs without nicotine, NRT, and unaided as reference), adjusted for all potential confounders.

For secondary analysis 2, we calculated a simple chi-square test to compare current EC use (yes versus no) between persons who had succeeded or failed to stop smoking whose quit attempts had started > 6 months earlier.

We conducted a complete case analysis in which person with missing data on one or more of the confounding variables were excluded, as laid down in the preregistered study protocol. All analyses were conducted using IBM SPSS Statistics 25.

A total of 60 998 people were interviewed, of whom 18 217 had smoked during the previous 12 months and 2991 had made at least one quit attempt. Of these, 239 had used ECs with and/or without nicotine in their most recent quit attempt, 168 had used NRT, 2333 reported no aids, and the remaining 251 had used other methods of quitting. Among the EC users, 117 had used solely ECs with nicotine, 94 had used solely ECs without nicotine, and the remaining 28 had used both.

The respondents’ characteristics are presented in Table 1. Approximately half had started their quit attempt > 6 to ≤ 12 months before the survey. Persons who had tried to quit with the help of ECs and NRT reported a stronger urge to smoke than persons who had tried to quit unaided. The groups also differed in terms of the type and planning of attempts to stop smoking.

Table 1
Characteristics of the study population
Enlarge All figures

Approximately half of the people in our study who tried to quit smoking with the use of ECs reported the use of ECs with nicotine, the other half ECs without nicotine. Our effect estimate for the comparison between ECs with nicotine and unaided attempts to quit (OR  2.34) was close to the pooled estimate comparing ECs with nicotine and solely behavioral therapy or no support from the latest Cochrane review (relative risk [RR] 2.61) (6). Our effect estimate for the comparison of ECs without nicotine and unaided attempts to stop smoking (OR  1.48) was not statistically significant. It seems evident that ECs are more effective when used with nicotine, because the nicotine from the ECs substitute the nicotine from cigarettes, thereby reducing withdrawal symptoms (13).

The Cochrane review also found evidence that ECs with nicotine are more effective than NRT (RR  1.53) (6). Our effect estimate for the comparison of ECs with and/or without nicotine was similar (OR  1.46) but inconclusive due to the smaller sample size for this comparison (n = 219 in the EC group and n = 159 in the NRT group).

We found that 65% (95% CI [38.2; 85.8]) of persons who achieved long-term (≥ 6 months) abstinence from tobacco with the aid of ECs were still using ECs at the time of the survey. This estimate is not reliable, as it was derived from a very small sample (N = 17 long-term abstainers), but it is consistent with the results of a recent randomized controlled trial in which 80% of persons who achieved long-term abstinence with the aid of ECs continued to use ECs (14). There is still a lack of evidence on the impact of extended EC use on long-term relapse to smoking. Extended use is inadvisable because, although safer than smoking, EC use is not without health risks.

The cross-sectional design of our study does not allow causal inferences and is prone to sources of bias, most importantly to confounding by indication. However, we adjusted our analyses for a range of confounding factors, including the urge to smoke at the time of the survey, which served as a proxy for the level of tobacco addiction at the time of the quit attempt. Furthermore, we strove to reduce the risk of measurement bias by using clear definitions of exposures and outcomes. A second limitation is that our data on quit attempts and use of quitting aids rely on the respondents’ self-reporting (potential recall bias). Third, we have no data on the chosen EC devices and liquids (including nicotine concentration and flavor) or NRT product, or on how people actually used their EC or their NRT product during the first weeks of their quit attempt. Fourth, our self-reported outcome measure included any duration up to 12 months and was not biochemically validated. Finally, our sample size was too small to detect a difference between ECs and NRT.

An important strength of our study is that it used a large, representative sample of the German population and that we were able to aggregated data over a period of almost 5 years, which increased the robustness of our analyses in times of potentially changing contextual factors. Our analyses are based on an established method of assessing the effectiveness of smoking cessation aids at population level: We compared the success rates of attempts to stop smoking with the use of various aids or unaided and adjusted our statistical analyses for a range of potential confounding factors, particularly tobacco dependence (15, 16, 17, 18).

Our study provides further evidence that compared with unaided attempts to give up smoking, the use of ECs in quit attempts is associated with tobacco cessation, especially for ECs containing nicotine. Experimental research on the effectiveness of ECs for smoking cessation in the German context is needed, both in the general population and in the context of patient care (e.g., smokers with chronic tobacco-related diseases).

Conflict of interest statement
Jamie Brown has received research funding to study smoking cessation from Pfizer and Johnson & Johnson, as well as from Cancer Research UK.

Daniel Kotz and Sabrina Kastaun declare that no conflict of interest exists.

Cite this as:
Kotz D, Jackson S, Brown J, Kastaun S: The effectiveness of e-cigarettes for smoking cessation—a comparison with nicotine replacement therapy and no use of evidence-based cessation aids in the German population. Dtsch Arztebl Int 2022; 119: 297–301. DOI: 10.3238/arztebl.m2022.0162

Table 1
Characteristics of the study population
Enlarge All figures 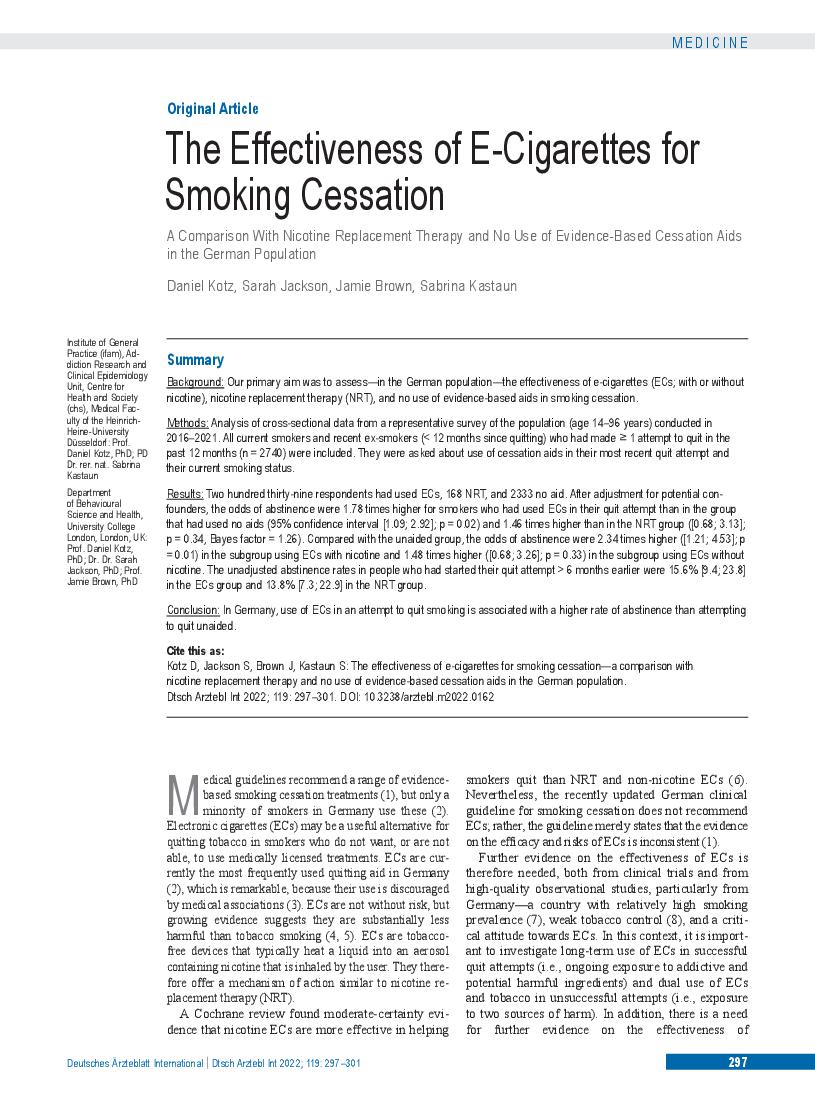