It is unsurprising given the topicality of the subject of HPV vaccination that it elicited both numerous positive responses and some which were critical. Hirte et al., for example, from the organization "Doctors for Individualized Vaccination Decisions" ("Ärzte für individuelle Impfentscheidung e. V.") – who also adopt a highly critical stance in relation to measles vaccination – assume a significantly lower efficacy of HPV vaccination, which is around 17%, taking into account the prevalence of CIN 2–3 in the total population, i.e., including women with primary HPV infection. This is, in itself, correctly quoted from our article. No invasive cervical carcinomas were detected at three-year follow-up, as Schenk observed. The development of cervical carcinoma takes at least 10 years, however, sometimes decades. At three-year follow-up, however, a large number of high grade dysplasias (CIN 2–3) had developed against a background of prevalent HPV infection at the inception of the study.

It was demonstrated both in the FUTURE studies and in the recently published ramdomized phase III study of Hildesheim et al. that young women with HPV infection or dysplasia do not benefit from vaccination. The HPV 16/18 vaccination does not improve virus elimination and should therefore not be used in the presence of existing infection (1, 2). It can, however, for example, prevent HPV 18 infection in women who are only HPV 16 positive. In addition, it should be noted that the vaccination effect will become increasingly noticeable over the years, as the placebo group become infected with HPV.

The best time for vaccination for girls and young women is before first sexual contact or before first HPV infection. More than two thirds of all women will become infected with HPV at least once during their lifetime. Men are also affected, in particular via genital warts. Efficacy is to be expected due to good immune response, but is not yet clinically proven.

The large studies to date showed such benefit in 15- to 25-year-old women not infected with HPV 16/18 that preventive vaccination was introduced in most industrialized nations worldwide (3).

As Dören and Wenderlein observe, however, the costs are high and may jeopardize the funding of other services – in particular where economic evaluations are lacking. These concerns are understandable given the costs. Nonetheless, the first cost effectiveness analyses carried out in a German context supported the vaccine's implementation (5). The number needed to vaccinate is around 120 in Germany, to prevent a single case of cervical carcinoma. The number is 6 for the tetravalent vaccine to prevent one case of disease due to HPV 6, 11, 16, or 18. The duration of protection is significant, in this regard.

The PAP smear based screening program introduced in Germany in the 1970s contributed to a significant reduction in invasive carcinomas. Regrettably, only around half of eligible women take up screening today in Germany, so that Germany has the highest incidence of cervical carcinoma in Western Europe, with 12 cases per 100 000 population per year, a figure which has remained constant since the mid 1980s (4). Unfortunately, an organized screening programme with a recall system has not been introduced. This would undoubtedly have a marked effect on the incidence of cervical carcinoma. This makes it all the more important to introduce HPV vaccination, as a promising and reliable intervention, on a nationwide basis.
DOI: 10.3238/arztebl.2008.0023b 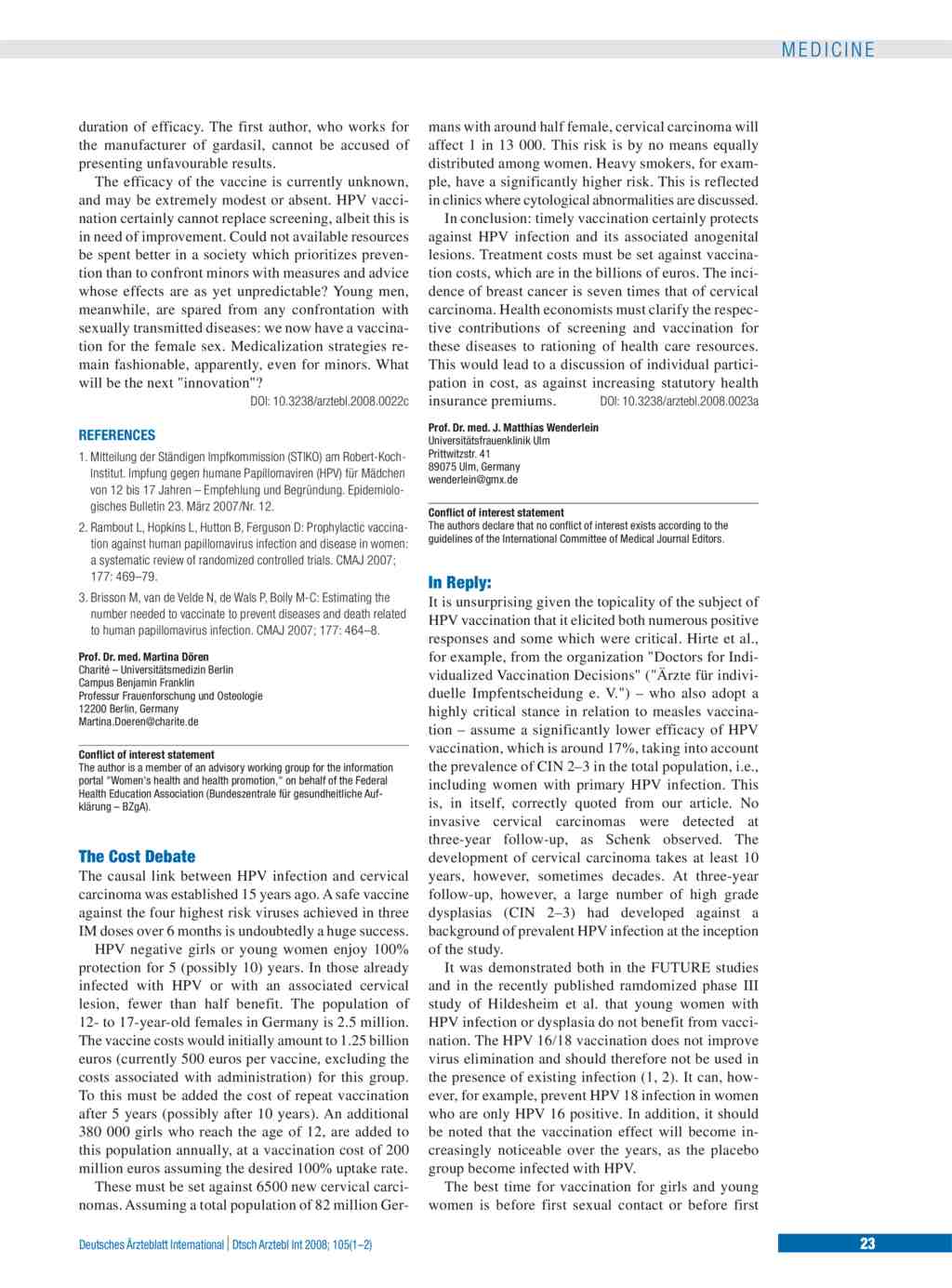