From the foundations into clinical practice" – this was the motto of the German thyroid experts' symposium in Heidelberg on 10 to 13 October 2007, a biennial event organized by the German Society of Nuclear Medicine (DGN), the German Society of Endocrinology (DGE), and the German Society of Surgery (DGCH). Since 1973, this congress has provided the largest international forum for the presentation of scientific and clinical data in thyreology. This time, the main focus was on results that prove immediate benefits from basic research for clinical patient care.

Euthyroid struma nodosa (euthyroid nodular goiter)
A four-arm, randomized, double-blind study (the LISA study) is investigating the drug treatment of euthyroid nodular goiter. Important results are expected by the end of 2008. Currently, combined treatment with iodide and thyroxine is regarded as the most effective therapy. The LISA study compares this combination therapy with thyroxine monotherapy, with iodide monotherapy, and with placebo.

Epidemiological studies from screening investigations in 2006 and 2007 have shown that the prevalence of goiter is still high in the German population. This is mostly due to iodine deficiency over the preceding decades. Laboratory data collected in the same time period indicate that the rate of undetected rises of serum thyroid peroxidase (TPO) antibodies in the population is extremely high, at about 13%. This is of enormous importance in view of the risk of developing hypothyroidism following autoimmune thyroiditis. Affected patients require follow-up with regular control examinations even if they are free of symptoms, in order to ensure timely substitution should they develop hypothyroidism. Currently, a lowering of the upper threshold of the TSH normal range is under discussion. This normal range is essential in the definition of so-called subclinical or latent hypothyroidism.

Functional thyroid disorders
Long-term sequelae of thyroid disorders have been observed to an increasing degree in recent times. Cohort studies have shown that the risk for cardiovascular disorders increases notably even with relatively small rises in the peripheral hormone concentrations, with a simultaneous drop in TSH concentration. Psychological changes are often due to subclinical or manifest hypothyroidism.

Especially in atrophic autoimmune hypothyroidism, the symptoms are often misinterpreted because of the long and stealthy progression of the disorder; consequently, substitution treatment is given too late. The classic (hypertrophic) form of autoimmune thyroiditis – Hashimoto's disease – is comparatively rare in Germany.

Graves’ disease
In the treatment of Graves’ (Basedow's) disease, the tendency is towards radical therapy. In radio-iodide treatment, which has become the most popular therapeutic method for this disorder, ablative dosages have become an established concept.

In terms of surgical treatment, many centers are moving towards performing total thyroidectomy. There is a consensus that thyroid surgery should be performed by experienced surgeons only, because of the risks of vocal cord paralysis and hypoparathyroidism. According to data from the German institute for the hospital reimbursement system (InEK, Institut für das Entgeltsystem Krankenhaus), about 100 000 thyroid operations are performed in Germany every year.

Molecular imaging
Innovations have occurred particularly in nuclear medicine, and especially in molecular imaging. With positron emission tomography (PET) scanning, recurrent thyroid carcinoma can be diagnosed early on, on the basis of the glucose metabolism or through the detection of somatostatin receptors. In addition to tumor detection, PET can also be used to control therapy and in the prognostic assessment of malignancies.

Therapeutic options have improved notably, thanks to molecular therapies in metastatic cancers. Calcitonin, an established tumor marker for C-cell carcinoma, is increasingly used for screening patients with nodular goiters, to detect such tumors as early as possible. Some 4% to 8% of thyroid malignancies are C-cell carcinomas. Early treatment can crucially improve the prognosis for these tumors. Large studies in patients with thyroid nodules have shown a detection rate for C-cell carcinoma of 0.1% to 0.3%. Serum calcitonin measurement in cold nodules is now widely established.

Guidelines
Guidelines for the treatment and aftercare of differentiated thyroid cancer have been discussed with some controversy, because of occasionally big differences in national and European recommendations. The current German guidelines provide for extensive TSH suppression, whereas the European guidelines deem substitution treatment with TSH values at the lower end of the spectrum sufficient in low-risk patients in complete remission. It is expected that the national guidelines will be adapted accordingly. The most important instruments in the aftercare are measuring serum thyreoglobulin, ultrasonography of the neck, and whole body scintigraphy after administration of radio-iodide.

Conclusions
In most thyroid disorders, the therapeutic successes are encouraging. However, the timely detection of thyroid disorders is lagging behind. Many patients with goiter or changes that can be detected by using ultrasonography remain ignorant of their condition.
Dtsch Arztebl Int 2008; 105(4): 69–70
DOI: 10.3238/arztebl.2008.0069

Conflict of interest statement
Professor Grünwald and Dr. Middendorp have received honoraria for speaking as well as research and travel support from Sanofi-Aventis.
The symposium was supported by Sanofi-Aventis Germany GmbH (Ltd) – Linie Henning.

Translated from the original German by Dr. Birte Twisselmann. 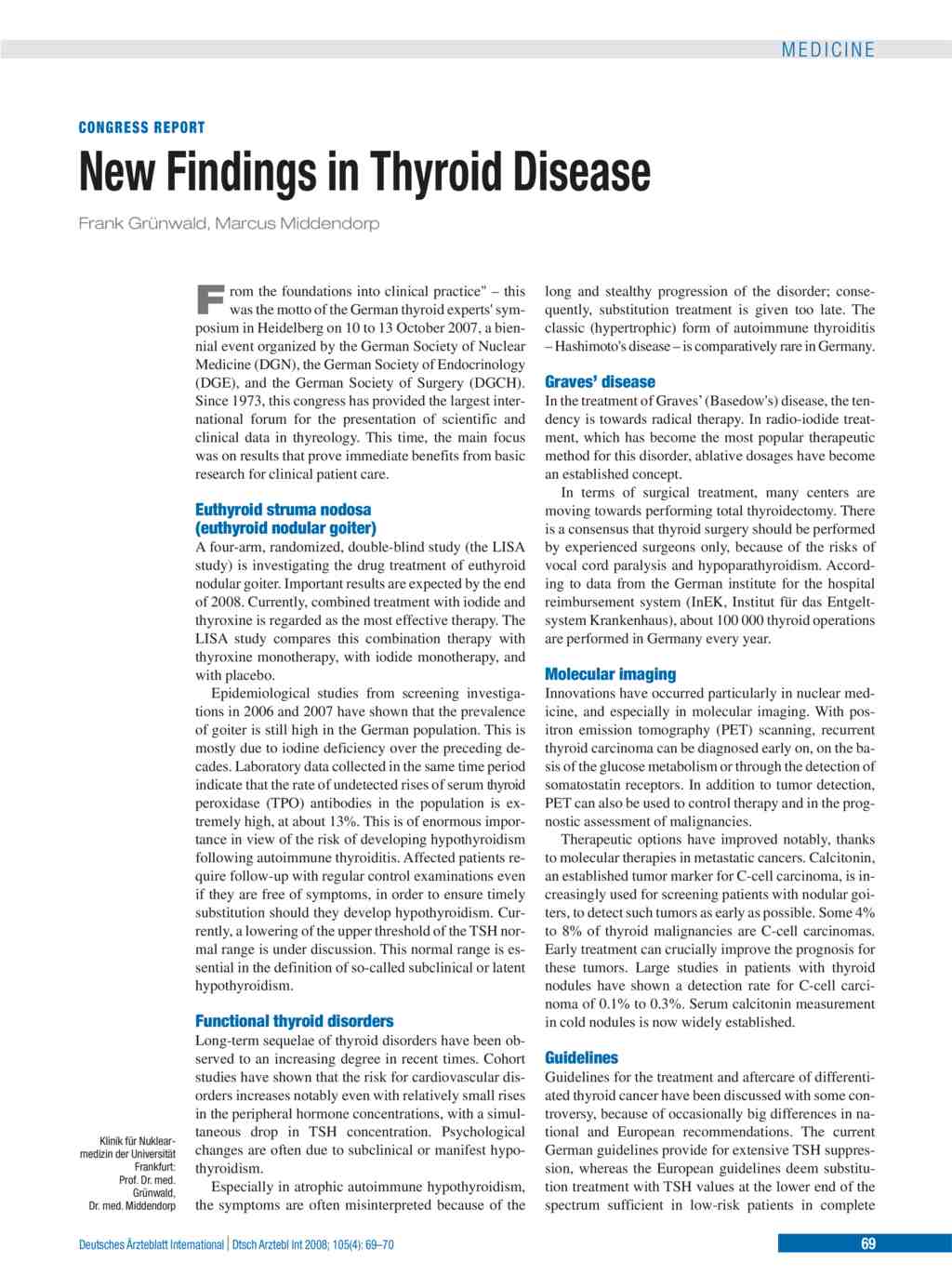