Publish Together or Perish

The Increasing Number of Authors per Article in Academic Journals Is the Consequence of a Changing Scientific Culture. Some Researchers Define Authorship Quite Loosely.

F. Scott Fitzgerald wrote, "No grand idea was ever born in a conference" – an allusion to the tendency of groups to overdiscuss the ideas of their members. Literary writers compose their works alone, not in collaboration with others. For scientists, the situation is rather different: in medicine, for example, group authorship is the rule, and single-author publications in academic journals are the exception. "Publish or perish," the familiar guiding principle of academic life, seems to have been transformed into a new principle, "Publish together or perish."

This is a trend of the last few decades. The mean number of authors of scientific reviews or original articles in Deutsches Ärzteblatt has risen from 1 in 1957 to 3.55 last year (figure 1 gif ppt). Figures from other journals confirm the trend: in Der Nervenarzt, a German journal of neurology and psychiatry, the mean number of authors per article was 1.1 in 1930, 1.4 by the late 1960s, and 3.4 for the five-year period from 1996 to 2000 (1). A similar development can be observed in English-language periodicals. For example, the mean number of authors per original article in the British Medical Journal rose from 3.2 in 1975 to 4.5 twenty years later (2). This trend has continued without interruption to the present, as shown in figure 2 (gif ppt) with figures from five further journals (3).

How can this increase be explained? Over the past two decades, the number of physicians at German medical schools – a large majority of the authors of medical articles in Germany work in university hospitals or in preclinical teaching and research institutions – has risen only slightly. According to the German Federal Statistical Office, the number rose by a bit more than one-tenth from 1991 to 2006, from 22 000 to 24 500 (approximate figures). This might be a reason for the larger number of publications originating from German medical schools (4), just as the increased number of medical publications worldwide is surely due, at least in part, to the increased number of medical scientists (5). With more potential authors available, it would be reasonable to expect more articles to be published, but the observed rise in the number of authors per article still demands an explanation. Furthermore, the 56-percent increase in this variable from 1991 to 2006 (taking Deutsches Ärzteblatt as an example) vastly exceeds the increase in the number of medical scientists.

The main reason for the increased number of authors per article is presumably to be found in the type of research strategy that currently prevails in science. Collaboration increasingly seems to be the prerequisite for discovery; in other words, the scientific team has largely replaced the old ideal of the brilliant researcher working alone.

From Darwin to the Human Genome Project
The development of biological science serves as an illustration of the new paths to discovery. Charles Darwin published his theory of evolution as a single author in the mid-19th century (6); the structure of genetic material was published by the authorial pair of Watson and Crick in 1953 (7); but the preliminary working version of the complete sequence of the human genome was published in 2001 by more than 160 authors who had worked together on the Human Genome Project (8). In fact, more than 1000 researchers were involved in this project.

A similar situation is found in medical science, e.g., with respect to therapeutic trials. In the past, a case series reported by a single expert in the field often sufficed; today, randomized and controlled trials are the gold standard. This far more demanding method was first applied in medicine in 1948 (9).

The same holds for a variety of scientific disciplines. Brian Uzzi, an American sociologist, and colleagues reported last year on the large extent to which teamwork has replaced single-author research not only in the natural sciences, but in the social sciences as well (10). They collected data on approximately 20 million articles and two million patents from 1955 to 2000, confirmed the trend toward an increased number of authors, and showed that articles written by more than one author were far more influential than single-author papers.

In the second half of the twentieth century, the size of authorial teams increased to the greatest extent in medicine and the natural sciences. The percentage of single authorships declined as well. From 1955 to 1959, approximately four of every ten articles still had a single author (editorials and letters to the editor excluded). By the end of the century, this figure had dropped to 13%. The social sciences manifest the same trend to a lesser degree, while, in the humanities, sole authors still predominate (table gif ppt).

The greater scientific influence of teams
The major finding of the study, however, is the link between team authorship and the scientific importance of an article. Uzzi and colleagues, considering the number of times an article was cited to be an index of the article's scientific influence (while avoiding use of the term "quality"), found that articles written by teams were cited significantly more often than those by single authors. The correlation between group publication and academic importance was already present in the 1950s, at the beginning of the period under study, but it grew markedly stronger over the ensuing decades.

These findings with regard to the natural and social sciences also apply to the humanities, albeit to a lesser extent. Individual researchers continue to write important works, but far less often than before, particularly among scholarly "classics": in the middle of the last century, publications that were cited at least a thousand times still tended to be written by single authors, rather than by teams, yet, in the natural sciences today, such publications are nearly always the product of teamwork.

These results are important also because they remain valid after the exclusion of self-citations – thus, this classic strategy of self-advertisement is not an adequate explanation for the findings of Uzzi and colleagues. Furthermore, similar effects were demonstrated for teams of different sizes, even though larger teams ought to possess a greater advantage with respect to self-advertisement. The analysis of patents also revealed the increasing importance of teams of inventors.

True and false authors
The trend toward teamwork in science is not yet a complete explanation of the increased number of authors per publication. This is suggested, at least, by a study showing that the number of authors of randomized clinical trials (RCTs) in gynecology has increased beyond what would be expected from the shift toward RCTs alone (11).

One reason for this may be that some scientists have begun to define authorship more loosely. The International Committee of Medical Journal Editors (ICMJE) has defined what the term "author" should mean in its "Uniform Requirements for Manuscripts Submitted to Medical Journals" (12; box gif ppt). The Deutsches Ärzteblatt, too, considers itself bound by these rules. Having supervised a research project or recruited patients for it does not suffice for authorship. Simply stated, an author must have either planned or performed the study and must also have participated to a major extent in the writing of the manuscript. Some scientists whose names appear on medical articles do not fulfill this definition. By calling themselves authors, they are not only deceiving the readers, but also obtaining an unfair advantage for themselves over other scientists who do adhere to the recommended authorship criteria.

Taking off the kid gloves
One is tempted to attribute these figures to the greater evaluative pressure and higher expectations regarding publication that confront today's medical scientists, but the studies on the degree to which authorship criteria are respected are cross-sectional analyses and thus permit no conclusion about a possible secular trend. There is evidence, however, of heightened competition for authorship. Wilcox (16), for example, reported a five-fold increase between 1991 and 1997 in the percentage of disputes over authorship, to 10.7%, among all disputes in medical disciplines that were referred to the Harvard University ombudsman's office. In 1995, professors occupied the more prestigious authorship positions to a significantly greater extent than they had done in 1975 (2). This increase occurred at the expense of medical scientists who were lower down in the academic hierarchy.

A few journals, including the BMJ, The Lancet, and JAMA, have now begun publishing the concrete contributions of each author toward the production of the manuscript (17–19). This method of watching over authorship has not yet become widespread. Another, equally voluntary approach toward keeping the number of authors in line with their actual contributions consists of an appropriate use of acknowledgements. Many persons have been included heretofore as authors because of contributions that, while aiding the performance of the study and/or the preparation of the manuscript, did not do so to an extent that truly justified authorship. Such persons can be thanked in an acknowledgement to make it clear that their contribution was helpful, without creating the false impression that they were involved as authors.

There are further motives for inaccurately identifying additional persons as authors, e.g., a friendly service to a well-liked colleague, respect for one's academic mentor, or the use of a prominent name to acquire a putative advantage in the peer-review process. There is, however, no overlooking the connection between illegitimate authorship by the ICMJE criteria and the documented rise in the importance of teamwork. Large studies need a large number of academic collaborators. The scientific colleagues, for example, who examine the patients participating in a clinical study will not necessarily be involved in the writing of the manuscript, and they therefore may not fulfill the ICMJE criteria for being listed as an author. They might nonetheless be rewarded for their contribution with an authorship, which will be of value to them in later evaluations of their academic performance. This mechanism helps sustain research activity; putting an end to it for constructive purposes would certainly be easier if the research bureaucracy were to start evaluating academic performance in a different way. The objective should be to promote teamwork in science, and thus to provide some kind of reward to scientific co-workers whose contributions do not rise to the level of an authorship, without sacrificing the principles underlying true authorship. One solution might be the official recognition of contributions to, and not merely authorship of, scientific publications.

The false author's opposite number is the "ghostwriter," i.e., the true, but unnamed, author of a manuscript. This is yet another complex topic in medical science, and doing justice to it would require a lengthier discussion than is possible in this editorial. It will be addressed in a later piece, as will the subject of the percentage of women authors of medical articles.

"No grand idea was ever born in a conference": perhaps so, but the increasing importance of teamwork in research shows that this is no longer true in medical science, at least if one interprets the term "conference" loosely to include teams of scientists working together. Fitzgerald himself immediately qualified his bon mot by adding, ". . . but a lot of foolish ideas have died there." In science, where falsification is very important, too, this is no small merit. 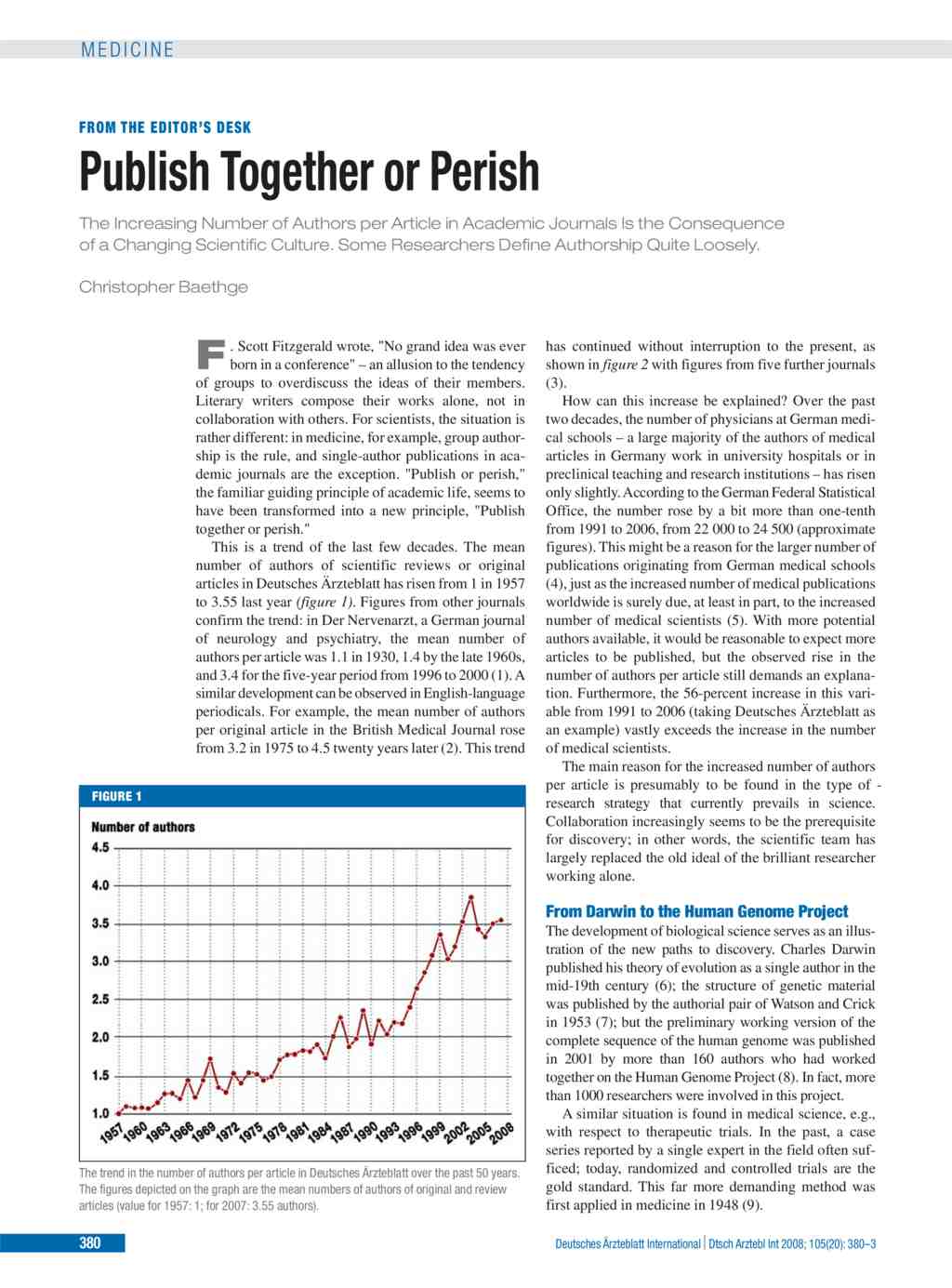