For non-small cell lung cancer (NSCLC), the unfavorable prognosis even in the early tumor stages is indisputable, and although adjuvant chemotherapy is associated with enormous toxicity, it is often urgently required. However, little is known about whether chemotherapy should be used in early stage tumors, which the authors reject for stage IA, advocating a decision on the basis of the individual patient for stage IB. Tumor size, lymphangiosis, and hemangiosis, the patient's age, and the patient's desire for such chemotherapy should all be part of the decision-making process.

Our retrospective analysis of patients with an R0 resected non-small cell lung cancer shows that the postoperative occurrence of hematogenic distant metastases – which are initially not manifest – is of particular relevance. Such distant metastases mostly develop in the first three years postoperatively via tumor cell dissemination or via micrometastases, and the prognosis is poor. They can be presumed to be causally related to hemangiosis (V1) in the tumor.

The literature of the past 15 years points out the frequency and prognostic importance of carcinomatous hemangiosis in non-small cell lung cancer, occasionally even accompanied by a recommendation for adjuvant chemotherapy in the earliest tumor stages in histologically confirmed V1.
In 46% of patients, we found unambiguous V1 in the primary tumor, which was associated with a significantly less favorable five-year survival rate than in tumors without hemangiosis (Kaplan-Meier test, p = 0.0249). By contrast, carcinomatous lymphangiosis was not a significant prognostic factor. Even if our study was "only" a retrospective study, we think that the importance of histologically confirmed V1 in the tumor is greater than assumed thus far, and it should therefore be considered a true prognostic factor. We suggest that prospective studies be conducted, to investigate whether in this high risk group of patients with non-small cell lung cancer the V1 finding as a true prognostic factor is – independent of the tumor stage – an indication for adjuvant chemotherapy, even in the early stages of tumor disease after successful R0 resection. DOI: 10.3238/arztebl.2008.0457a 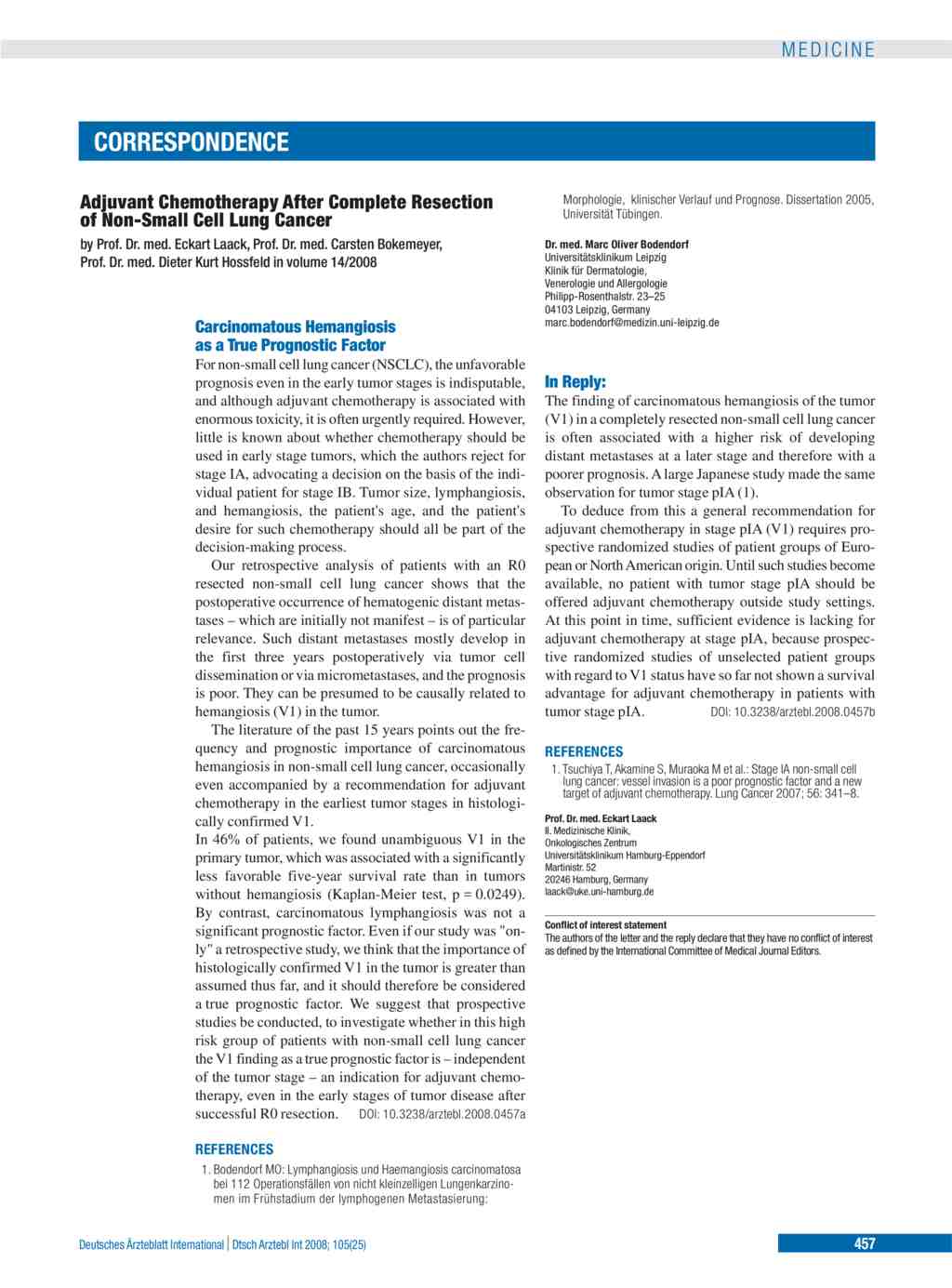