Women are Catching up

The Number of Female Authors in Medical Literature Is Increasing, but Is Still Considerably Lower Than That of Male Authors and Corresponds to the Proportion of Women Working in Academic Medicine.

Emilie Lehmus, the first German woman to study medicine, would never have imagined it possible: almost 140 years after beginning her medical studies in Zurich because she had not been allowed to enroll in German universities (1), six out of ten of those pursuing a degree in human medicine in Germany are women. In fact, this figure was even higher last winter semester, with women accounting for a full 64% of those beginning medical studies. A cover story in March 2008 in Deutsches Ärzteblatt summed up the trend in its title: "Die Medizin wird weiblich" ("Medicine is becoming feminized") (2).

This observation applies not only to medical students, but also to physicians – both in Germany and worldwide. The growing proportion of women working at all levels of the medical profession deserves greater attention for a variety of reasons, including the real or perceived cultural transformation of medical practice through "feminization" (3), or the fear of income disparity and devaluation of the profession (4, 5). Yet other authors address issues related to balancing work and family (2, 6). In this editorial, I will be discussing another important question related to this topic: what percentage of scientific authors in medical journals, and in Deutsches Ärzteblatt in particular, are women?

In contrast, women are much better represented in many American journals: Jagsi et al. (8) analyzed the percentage of female first authors in the United States between 1970 and 2004 in six major medical journals: New England Journal of Medicine, Journal of the American Medical Association, Annals of Internal Medicine, Annals of Surgery, Obstetrics & Gynecology, and Journal of Pediatrics. In 2004 an average of 29.3% of all first authors were women, although the figures for the New England Journal of Medicine and Annals of Surgery were considerably below this average (figure 2 gif ppt).

The findings presented here demonstrate two things: first, the proportion of female first authors in the operative specialties (surgery, otolaryngology; exception: gynecology) is lower, albeit sometimes only minimally, than in the more conservative specialties (pediatrics, emergency medicine, internal medicine). Second, the number of women with first author status in American journals is greater than that in Germany or the Netherlands. The former finding is likely related to the fact that there are fewer women physicians working in otolaryngology and surgery than in pediatrics, internal medicine, emergency medicine, or gynecology (12). The latter finding raises the question of whether women here have fewer opportunities for publication.

To answer this question, we need to know not only which proportion of published papers, but also which proportion of submitted (i.e. accepted and rejected) papers, had a female first author. A look at the publication statistics for Deutsches Ärzteblatt reveals the following: of all papers submitted to the journal in 2007, 17.99% had a female first author. This percentage is similar to the 17.24% of published papers with female first authorship (figure 1). Because we can assume that there were no fundamental differences in quality between the papers submitted by women and men, it is thus safe to say that male and female authors receive equal treatment in Deutsches Ärzteblatt’s review process.

Proportion of female authorship corresponds to proportion of women with academic positions
It appears that the proportion of female first authors is closely related to the proportion of women working in academic medicine. The vast majority of authors whose papers are published in the science section of Deutsches Ärzteblatt are either part of a university hospital's staff or, as professors or lecturers, are members of its faculty. Of course, not everyone working at a university hospital writes scientific articles. In Germany, those who do are likely pursuing the postdoctoral qualification of Habilitation (the precondition to become a professor), and thus an academic career. If we take a closer look at the percentage of women with professorial positions in medicine (11.8%) and the percentage of women pursuing a Habilitation (17.6%), we can see that women at university hospitals are underrepresented compared to students or other colleagues in medicine (figure 3 gif ppt). Because Deutsches Ärzteblatt publishes almost exclusively clinical research, the number of female first authors in its pages appears plausible considering the low number of female professors (8.1%) and of graduates pursuing a Habilitation (15.1%) in clinical specialties. Moreover, the percentage of professors in clinical specialties who are women roughly corresponds to that of female professors on the scientific advisory board of Deutsches Ärzteblatt. The parallel between the percentage of women working in academic positions at universities and that of female first authors in emergency medicine (10) and surgery (11), as well as in other areas of scientific study such as biology (13), has also been drawn by the authors of some papers.

After completing her studies in 1875, Dr. Emilie Lehmus was not granted a license to practice medicine in Germany. However, based on Kurierfreiheit – a freedom to practice medicine granted to unlicensed healers and other medical practitioners in Germany – she nevertheless opened up her own office and worked as a physician in Berlin until 1900 (1). One year earlier, Baden had become the first German state to allow women to study medicine (14), some fifty years after women were first allowed to enroll in medical studies in the United States. Over a century later, this editorial would like to encourage female and male authors in equal measure to publish in Deutsches Ärzteblatt.

Translated from the original German by Matthew D. Gaskins. 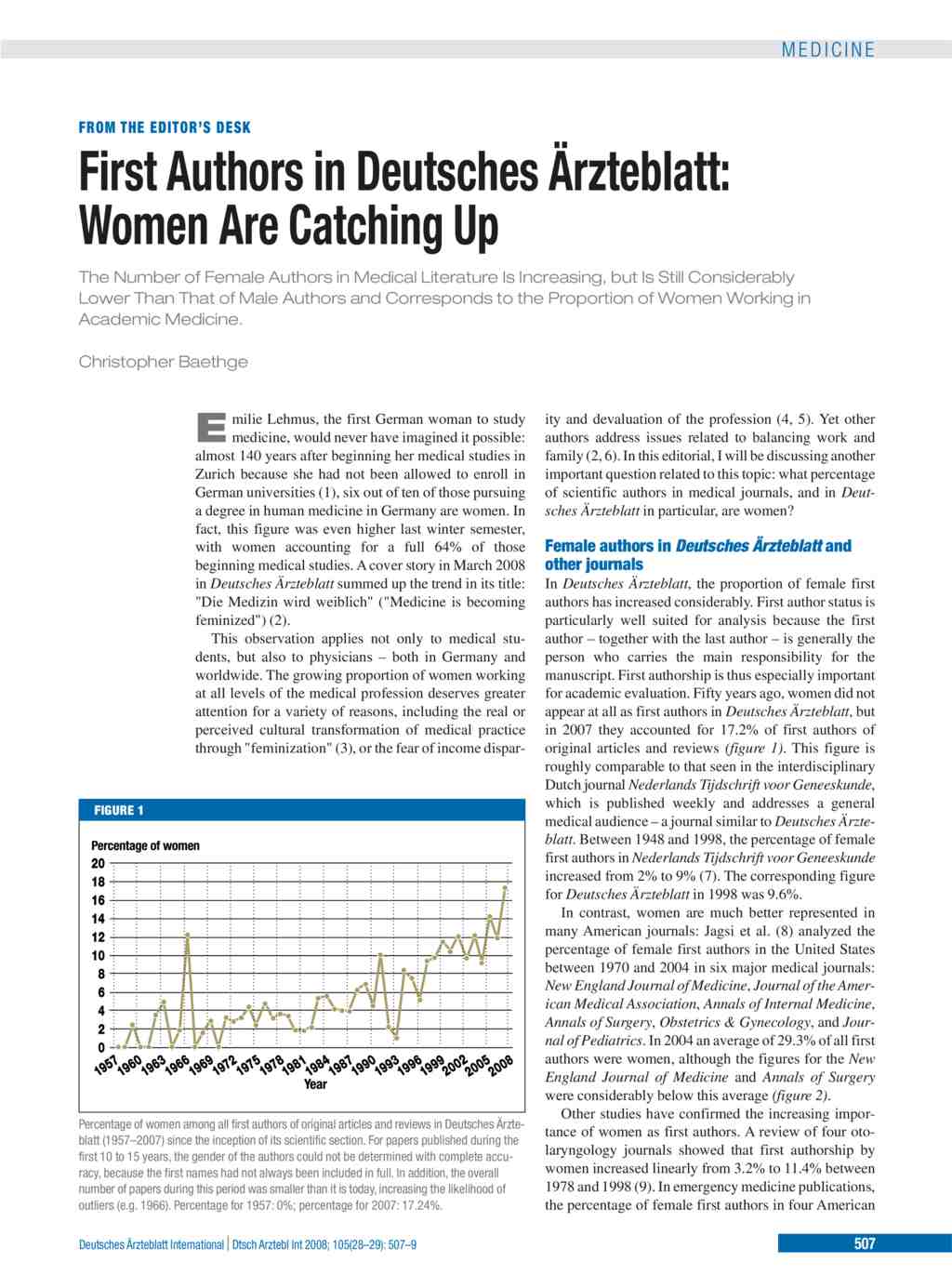