Progress assessment under methylphenidate
Much like children, many adults in clinical practice show improvement in their handwriting. Single or double blinded studies (the latter being more difficult to conduct in clinical practice) could be undertaken to prove the necessity of continuing medication. The diagnostic predictive power of the efficacy of methylphenidate, for example in single or double blinded trials is limited, however, owing to the response rate of 75% (1). Even patients who do not respond may have ADHD. Questionnaires and neuropsychological tests can complement diagnostic tests and assessment of progress.

Addiction (THC) and ADHD
As described in the article, addiction disorders are a common comorbidity and differential diagnosis in ADHD in adulthood. Tight control of the drug consumption is indicated. In patients with comorbid addiction, treatment with stimulants should be undertaken only under controlled conditions (drug screening).

ADHD and consumption of THC
Dr Vogel is right to point out that the categorization into primary and secondary ADHD is not generally established and no consensus exists. However, we think that this categorization is valid. The subgroup of patients that we want to draw attention to is not the one with clearly detectable organic psychiatric syndromes in the sense of the frontal lobe syndromes (to whom Dr Vogel alludes and in whom ADHD represents only a fraction of a wider psychopathology). We want to draw attention to the fact that there are many patient subgroups in whom the psychopathology is identical to primary, mainly genetically related ADHD. Additional findings such as irregularities on the EEG, complications during birth, a medical history of encephalitis, or clinically remitting pyknolepsy may indicate a secondary and not a primary, ie genetic, pathogenesis, although the clinical picture does not exceed that of classic ADHD. The categorization into primary and secondary ADHD can help explain why no positive family history exists in a large subgroup of patients. Further, this categorization can be clinically relevant-for example, when considering whether substances such as carbamazepine (for which several double blinded studies have been done with respect to their use in ADHD) or whether valproate should be tried out in the context of off label medication.

Differential diagnosis estrogen deficiency syndrome
To make a diagnosis of ADHD in adulthood, corresponding symptoms in childhood are essential. It is not an episodic disorder or one that manifests only in adulthood. These criteria should be considered when differentiating ADHD from estrogen deficiency syndrome—whether relevant as a differential diagnosis or as a comorbidity (for example during the menopausal years).
DOI: 10.3238/arztebl.2008.0766 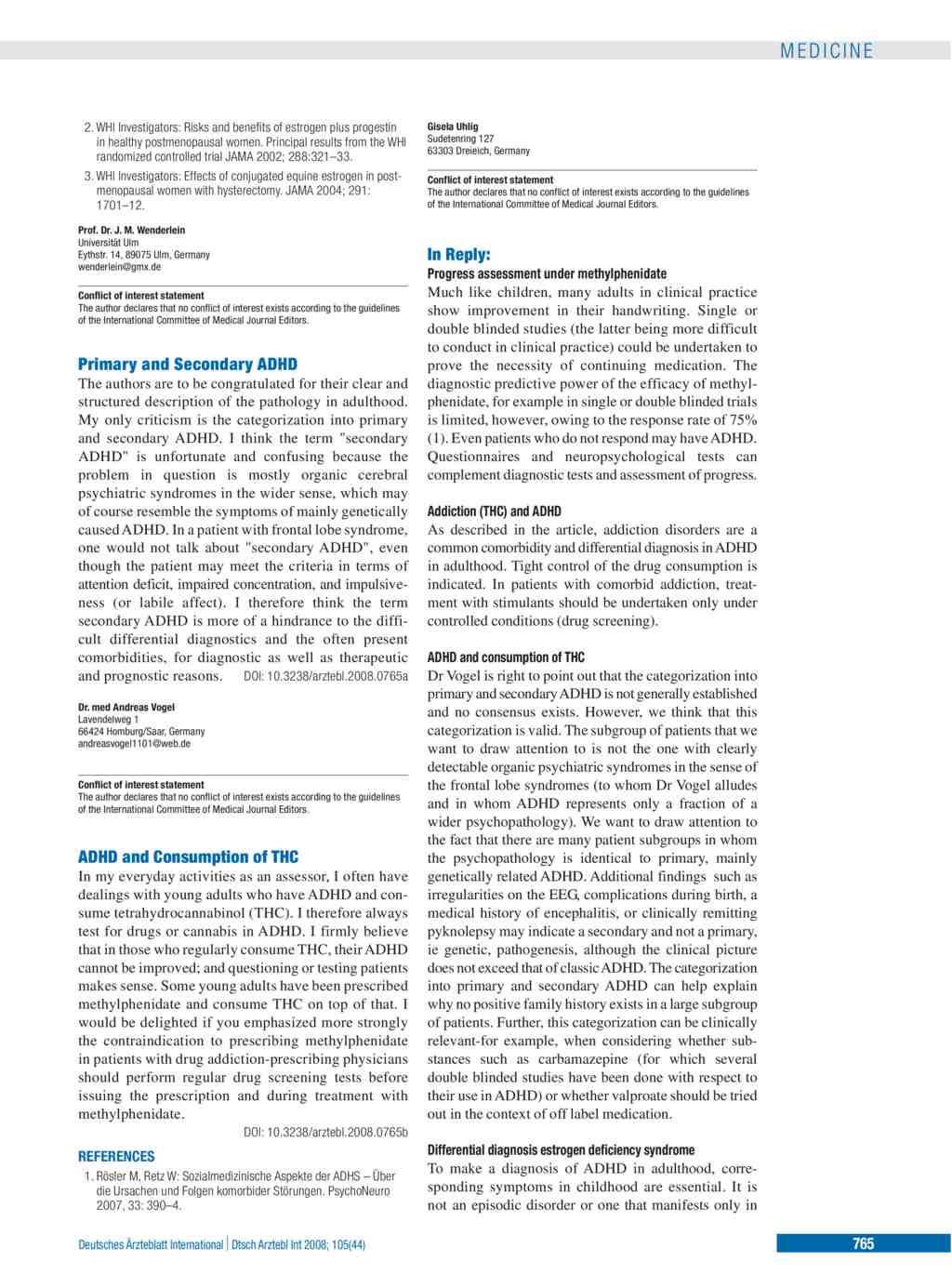