Guideline-Compatible Treatment of Breast Cancer Patients – The Status Quo in Schleswig-Holstein: In Reply

The OVIS study was a population based study and investigated 1927 patients with breast cancer from Schleswig-Holstein by means of a questionnaire about their medical care, with an emphasis on diagnostics and therapy. Additionally, psycho-oncological measures were taken into consideration in the initial and second survey—some 1.5 and 3.5 years after the diagnosis.

Our results for these areas are consistent with those of Dr Schumann: only 20% of patients had used psychological or psychotherapeutic help in dealing with their illness. In addition to professional psycho-oncological help, patients were also questioned about "low level advice", such as regional cancer advice centers, self help groups). 36% of patients reported knowledge about self help groups and 6% reported membership of those. Cancer advice centers were known to about half of the women. With regard to areas that need improvement in caring for cancer patients, 36% evaluated "psychological care" as in need of optimization (unpublished results).

In spite of this, the patients reported a high quality of life 1.5 or 3.5 years after their diagnosis. Their global assessment of their quality of life was higher at a clinically relevant level than that of a comparable general population. However, breast cancer patients described impairments in role functioning asd well as emotional and social functioning. Other symptoms included fatigue, dyspnea, and insomnia and were reported by cancer patients 1.5 years and 3.5 years after the diagnosis. (1)

We have nothing to add to Dr. Stadler's comments on the radiological therapy for breast cancer. The described complex clinical contexts are not always easy for patients to follow. Patient surveys may reach their limitations in these settings. An overestimate of the rate of radiation after axillary dissection is entirely possible if only patients are questioned. On the other hand, we were able to arrange a questioning of the treating doctors for a partial cohort of the patients. Even the physicians reported axillary radiotherapy or radiotherapy of the parasternal lymphatic drainage pathways for 30% of patients.

Such a result should prompt a closer look in practice (comparable original article...[the indicator radiotherapy after axillary dissection should be checked]). Inadequacies in care to the extent described seem unlikely to us if not totally out of the question.

We did not claim to have delivered a conclusive evaluation of oncological care; we merely provided an orientation. We think that patient surveys are an effective procedure to evaluate oncological care, at least for as long as Germany does not have wide ranging and cross sectoral clinical cancer registration system.
DOI: 10.3238/arztebl.2008.0768

Conflict of interest statement
The authors of the letters and of the reply declare that no conflict of interest exists according to the guidelines of the International Committee of Medical Journal Editors.
1.
Waldmann A, Pritzkuleit R, Bartel C, Raspe H, Katalinic A: The OVIS-study: Health related quality of life measured by the EORTC QLQ-C30 and -BR23 in female patients with breast cancer from Schleswig-Holstein. Qual Life Res 2007; 16: 767–76. MEDLINE
Guideline-Compatible Treatment of Breast Cancer Patients –... 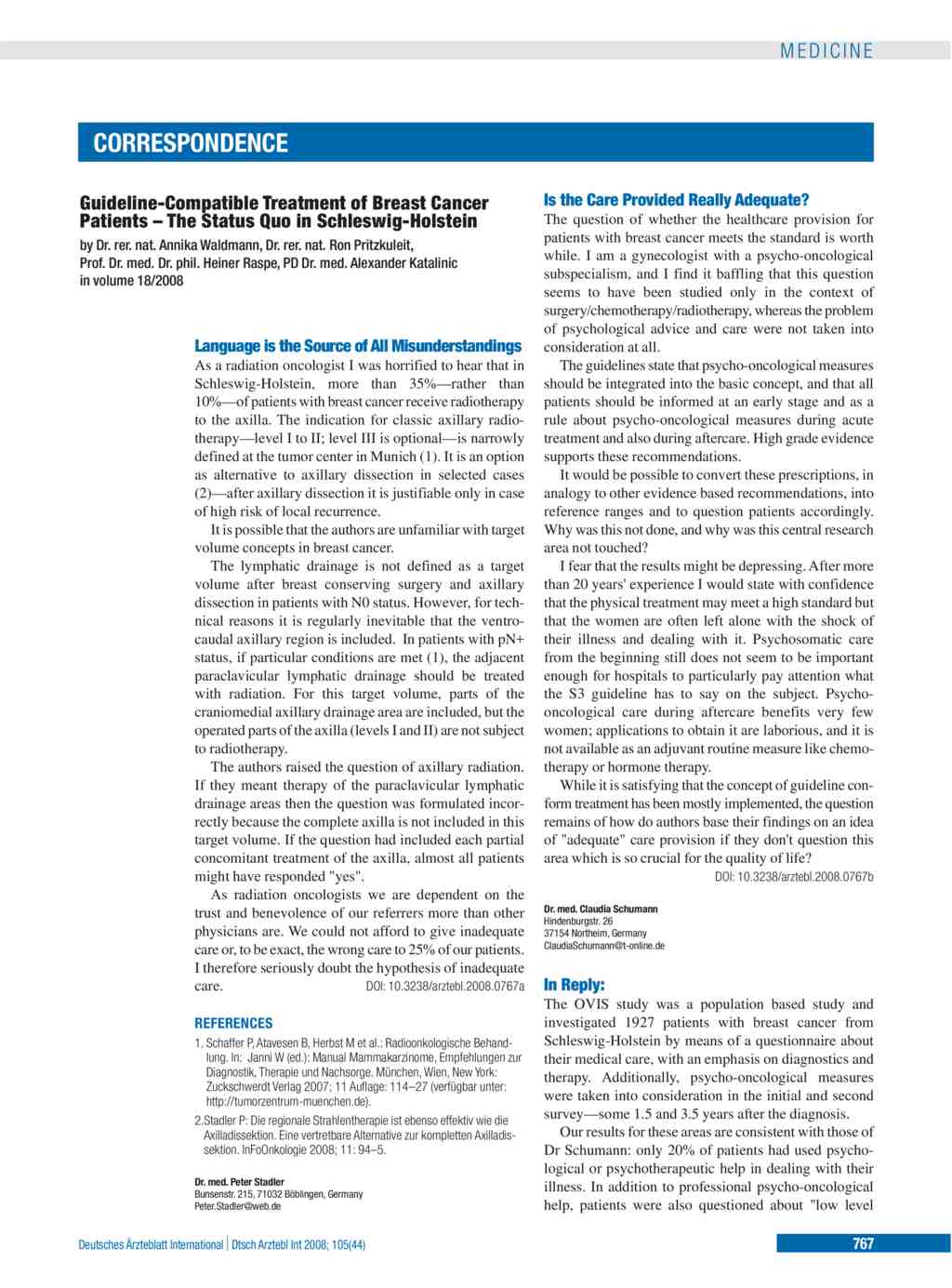