To illustrate the average rate of 2% of ASDHD in adults, I would like to refer to a group of women who show the clinical lead symptoms more often than might be expected: reduced attention span, inner unrest, disrupted affective regulation, depressive moods, and sometimes resultant disorganization. This group comprises women with severe menopausal symptoms aged around 50, who can be treated with medication without going "off label". Extreme symptoms of extreme estrogen deficiency (which also occurs after castration in the fertile years) are not associated with the clinical diagnosis of ADHD as often as they should. This physical correlation requires increased interdisciplinary exchanges.

From aromatase research (more than 40 years with the enzyme letrozole), estrogen deficiency is known to induced attention deficits, memory deficits, and cognitive deficits. In oncology, the same is known in patients treated with adjuvant aromatase inhibitor therapy. After only one year out of five years' planned therapy, patient compliance reduces to one third. Hence it is not surprising that the brain, which is well furnished with estrogen receptors, is not able to perform enough tasks to a satisfactory degree. Before the extent of ADHD is reached, with impaired quality of life, women decide on non-compliance.

The authors suggest exclusion diagnostics using internal medical and neurological parameters. In women, ovarian function should be taken into consideration. A notably raised prevalence of ADHD has been shown in prisoners, of some 25%. In women, this stress situation often results in amenorrhea-the ovarian function ceases and estrogen deficiency starts to affect the brain.

In men, an analogous reaction develops, for example in prisoners of war-less testosterone is being converted into estrogen. The authors refer to the disrupted dopaminergic system and disrupted synaptic function.

If estrogen treatment is attempted, the increased risk of breast cancer (in the per mille range) has to be highlighted. In the Women's Health Initiative cohort, new cases of breast cancer per 10 000 women were found in 38 women having gestagen therapy and in 30 women taking placebo (3). This difference of 8 women per 10 000 women/year, or 0.8 per mille, has been confirmed by a preceding, large study (1). In the Women's Health Initiative cohort with estrogen monotherapy, 7 fewer cases of breast cancer were detected in 10 000 women compared with placebo, which also means in the per mille range (2). These data will sway the decision in favour of estrogen substitution in ADHD. DOI: 10.3238/arztebl.2008.0764b 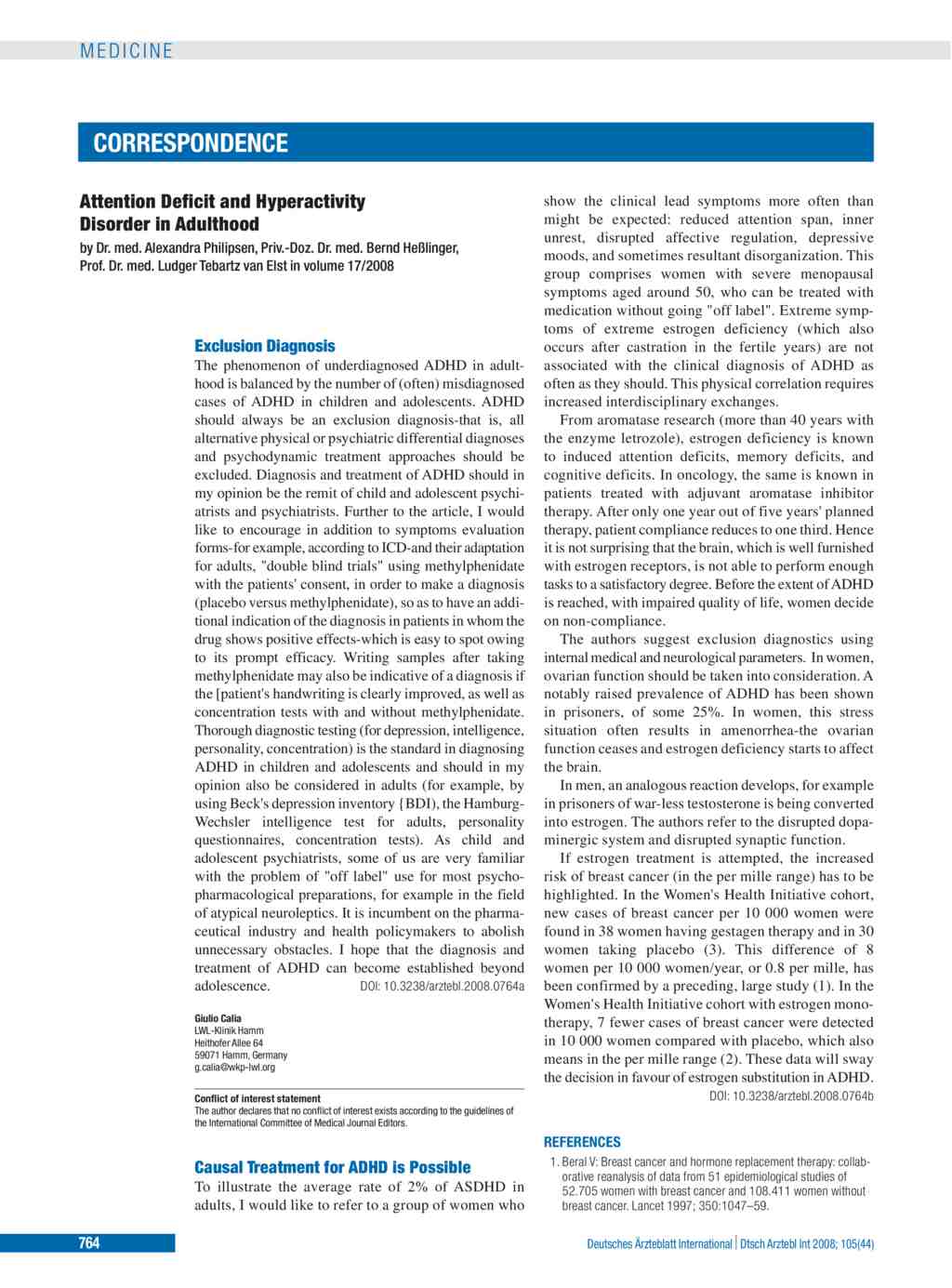