In accordance with the algorithm featured in our article, patients with lumbar spinal stenosis are initially treated conservatively. A multitude of conservative therapeutic modalities are available, and we thank your correspondents for their contributions. However, a general algorithm does not leave room for detail. Our review article aimed to present current scientific knowledge according to the criteria of evidence based medicine, to enable readers to diagnose the condition more easily and to provide evidence based decision aids for treating it. Engel and Seidel propose special physiotherapeutic concepts as a fixed component in the treatment of lumbar spinal stenosis. However, unfortunately there is thus far no proof that conservative therapeutic concepts are superior to other measures, so we were not able to deduce such recommendations for our article. Study results exist for the operative treatment pathway, but not for conservative treatment (1). Hence the effectiveness of the different therapeutic options is still not clear, and further studies are highly desirable.

Engel and Seidel want to apply a standardized diagnostic instrument to a multimodal conservative therapeutic concept and recommend a system developed by themselves. Like most of the published data collection systems, however, theirs was conceived for general skeletal disorders and patients with chronic pain and a high prevalence of psychosocial disorders (2). Although the pretherapeutic assessment of patients with spinal disorders seems to make sense, there is thus far no widely used diagnostic system, nor has it ever been shown that using such a system really does improve the treatment result.

The concluding recommendation of attempting non-surgical treatment as an initial measure is consistent with our algorithm. The acute paralyses or intolerable intractable pain that may necessitate immediate surgery are rare with lumbar spinal stenosis (1) and are mostly caused by associated disc prolapse. Of course symptoms may improve after conservative therapy even in cases of radiologically massive stenosis. But if several months of conservative treatment do not yield sufficient improvement then surgery is indicated.

Henneberg in her letter mentions epidural injection of corticoids and local anesthetics for patients with inoperable spinal stenosis. Although owing to anesthesiological progress, only few patients are regarded as inoperable, we are in support of her suggestion to evaluate this injection therapy in lumbar spinal stenosis. Unfortunately, epidural injection of corticoids has thus far been undertaken only in patients with unilateral lumbar root compression (1, 3) and not in patients with lumbar spinal stenosis. As long as the sustained effectiveness or superiority of this treatment option vis-à-vis others has not been shown, non-licensed treatments can often not be integrated into evidence based treatment guidelines, especially if they are invasive measures and as such not harmless. DOI: 10.3238/arztebl.2008.0824 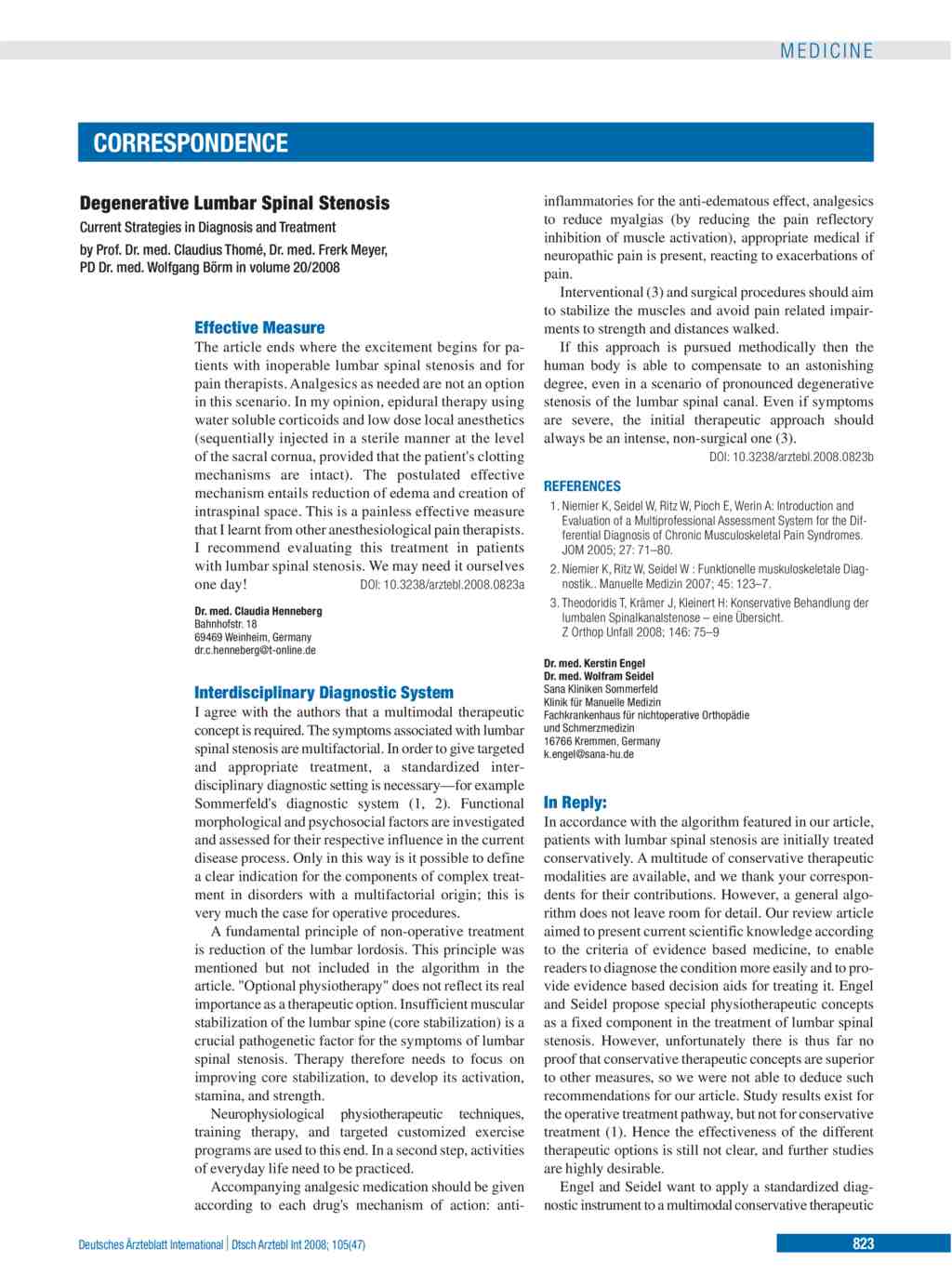