Overweight and obesity are common in Germany. An analysis of German data shows that the prevalence has increased continuously over the past 20 years (1). The recently published National Nutrition Survey II (Nationale Verzehrsstudie, NVS II) showed a prevalence of obesity in men of 20.5% and in women of 21.2% for 2006 (2). A notably increased waist circumference (>102 cm in men and >88 cm in women) was found in 27.4% of men and 31.8% of women. Between 1985 and 2002, a relative increase in the prevalence of obesity of 39% in men and 44% in women can be documented (3). According to data from the US National Health and Nutrition Examination Survey (NHANES), the prevalence of obesity is set to increase further (4).

The high prevalence of obesity requires new strategies, in order to stop this "epidemic" (5) at the individual level as well as the population level, and to reverse the trend. Preventing the growth of this epidemic is a classic public health task (3). In spite of many scientifically based treatment strategies, the medium term to long term success of conservative obesity therapies has been unsatisfactory. Only 15% of all persons with grade 1 and 2 obesity (body mass index [BMI] 30–40 kg/m2) are able to lose substantial amounts of weight and maintain their new weight for more than 5 years. Correcting grade 3 obesity (BMI ≥40 kg/m2) to a satisfactory degree by using conservative measures is possible only in rare exceptions. For this reason, the World Health Organization (WHO) has given greater priority to obesity prevention than has been the case so far (5).

The family doctor/general practitioner is the starting point for the population and may therefore assume a central role in the prevention and early detection of chronic diseases. Data on the prevalence of obesity and its accompanying problems as recorded in primary care settings is therefore urgently needed. This is also an essential condition for the future planning of resource distribution in the healthcare system. This is the focus of the current study, which reports current data on the prevalence of obesity as defined by BMI and waist circumference in Germany's primary care system.

Additionally, data on the regional distribution and the association with type 2 diabetes are presented. Such a presentation makes sense as lifestyle habits and socioeconomic conditions within German differ widely and obesity prevalence rates may therefore also differ, as has been shown by NVS II (2).

Knowledge of regional distributions is also important because it provides a basis for the mostly regionally organized associations of statutory health insurance physicians to plan in accordance with healthcare needs. So far, only few regional preventive and therapeutic services have been available to tackle this condition in primary care; action is therefore urgently required. To provide current data on the prevalence of obesity, increased waist circumference, and type 2 diabetes and their regional distribution we evaluated the data set from the German Metabolic and Cardiovascular Risk Project (GEMCAS) (6, 7). This cross-sectional data collection was conducted in the fall of 2005 involving 1511 doctors' surgeries with the participation of 35 869 patients.

Methods
Study design
GEMCAS data form the basis of this analysis (6, 7). This epidemiological, cross-sectional study aimed to collect data on the prevalence of the metabolic syndrome in primary care on a national level. The practices included were family doctors' practices (general physicians, general practitioners, specialists in internal medicine—no practices specializing in diabetology or cardiology) from all over Germany, which were randomly selected. The objective was for the practices to recruit for the study in one morning all—as far as possible—patients older than 18 years, independently of the reason for their visit. The study was approved by the ethics committee at the University of Duisburg-Essen.

The examination included standardized measurement of BMI, waist circumference, and blood pressure, as well as blood glucose and serum lipid analysis. The study was conducted in accordance with the recommendations for good epidemiological practice (GEP). Nationwide onsite and telephone monitoring also secured the study quality (7).

Statistical analysis
The statistical analysis included the calculation of crude prevalence rates and their standardization by age and/or sex to the German population in 2004 (8). Regional allocation was done by using the doctors' practices' post codes. The software package SAS 9.1 was used to analyze the data.

Results
Of the 17 271 doctors who were invited to participate in the study, 2600 were willing to participate in principle. The final number of doctors recruited was 1511. The proportion of participating doctors relative to the total number of doctors in the respective federal state or the regional association of statutory health insurance physicians varied between 1.89% (Hamburg) and 4.57% (Saarland) (table 1 gif ppt). In the study period of 10 to 21 October 2005, doctors included 35 869 patients into the study (participation rate 85.6%). The patients' mean age was 51.7±16.1 years; 38.9% of patients were men. Patients' characteristics have been published elsewhere (6, 7, 11, 14, 20).

Overweight and obesity according to BMI
The prevalence of overweight was 36.4% (95% confidence interval [CI] 36.0 to 37.0), after standardization it was 36.6% (CI 36.1 to 37.2). The crude prevalence of obesity was 23.9% (CI 23.4 to 24.3), and the standardized prevalence was 22.8% (CI 22.3 to 23.2) (table 2 gif ppt). The prevalence of obesity increased notably with age. More men than women were obese. Table 3 (gif ppt) shows the regional distribution of overweight and obesity, standardized by age and sex, by federal state (population of Germany in 2004). The highest prevalence rates were noted for the northeastern states (Mecklenburg-Western Pomerania, Brandenburg, Saxony-Anhalt, and Thuringia). The lowest rates for obesity were found in Schleswig-Holstein, Hesse, and Baden-Württemberg and in the city states Bremen and Hamburg. The maximum rate ratio of the states was 1.15 : 1 (Thuringia versus Bremen) and for obesity, 1.43 : 1 (Saxony-Anhalt versus Bremen). Figure 1 (gif ppt) shows the regional distribution of overweight and obesity.

Abdominal obesity
The prevalence of moderately and notably increased waist circumference in the study population was 22.8% (CI 22.3 to 23.2) and 39.5% (CI 39.0 to 40.0). The standardized prevalence was 22.2% (CI 21.8 to 22.7) and 36.5% (CI 36.0 to 36.9). A clear increase was noted with increasing age. Women had an increased waist circumference notably more often than men (table 2). Table 3 shows the regional distribution of abdominal obesity. The northern and northeastern states (Lower Saxony, Mecklenburg-Western Pomerania, Brandenburg, Saxony-Anhalt, and Thuringia) had the highest prevalence rates. Patients were often overweight in Saarland and Rhineland-Palatinate. The lowest rates were seen in Berlin, Hamburg, and Bremen (only for abdominal obesity). Figure 2 (gif ppt) shows the regional distribution of abdominal obesity.

Representativeness was achieved by random selection of practices in all of Germany and the consecutive inclusion of patients on the study day. Further, targeted stratification was undertaken in order to be able to make valid statements about the group of younger patients that visit their doctors more rarely than older patients. Although important variables—such as the frequency of obesity, mean socioeconomic status, or the proportion of smokers—often corresponded with the result of population based studies (8), it was not the intention of this study to provide representative data for the total population but only to reflect the situation in primary health care.

Data on the regional distribution of obesity can be found in NVS II (2). That study also found a higher obesity prevalence in Germany's northeast (25.3% of men and 21.8% of women) than in the rest of the country. The data are comparable in detail to a limited degree only because they were aggregated for groups of federal states. In total, the prevalence of obesity was slightly higher in this study than in the NVS II study, which was being conducted simultaneously. This may be explained by the fact that obese people are likely to be overrepresented in a general practice's population, owing to their comorbidities. More women than men use primary care. The average age is slightly higher than in the general population. However, we attempted to adjust for these differences in calculating standardized prevalence rates.

In recent years, waist circumference has increasingly become the predictor of an increased mortality and morbidity risk. It shows the pattern of fat distribution and identifies persons at increased cardiovascular risk better than the BMI (11, 12). The IDEA study has provided new data comparing primary care populations internationally (mean age 48.5 years, 18 to 80 years). The main prevalence of notably increased waist circumference in this study was 29% for men and 48% for women (cut-off >102/88 cm for men/women) (13). The results of the GEMCAS study (36% for men and 42% for women with a waist circumference >102/88 cm) add data from a mainly primary care cohort to these data. In contrast to the DETECT study, specialists such as cardiologists and diabetologists were excluded from participation because of the particular patient selection. To the authors' knowledge, no published data have thus far been available on the regional distribution of increased waist circumference in Germany.

The observation that more men than women have a raised BMI, whereas more women than men have an increased waist circumference is surprising at first glance only. The explanation lies in the defined different threshold values that take into account the different physical proportions of men and women. The threshold value for notably increased waist circumference in women (>88 cm) was defined on the basis of a Scottish population. It does not reflect the absolute risk levels according to PROCAM or SCORE that are currently used to estimate cardiovascular risk (14).

A series of cohort studies have shown the association between BMI and the risk of diabetes (16–18). About half of all new diagnoses of diabetes were made in persons with a BMI >30 kg/m2, and almost 20% have a BMI >35 kg/m2 at the time the diagnosis is made (17, 18). Especially abdominal obesity, as measured by waist circumference, is associated with insulin resistance. No strong association exists, however, between BMI and the prevalence of type 2 diabetes. A recently published study (19) found 13 persons with diabetes for every 100 overweight or obese persons in the US, 99/100 in India, 25/100 in the Philippines, 37/100 in Taiwan, 34/100 in Hong Kong, 19/100 in China, 28/100 in Singapore, 25/100 in Korea, and 34/100 in Thailand. The authors assume that genetic differences are the most likely cause of this variation in insulin resistance (19). The current study found differences for Germany in the prevalence of diabetes relative to overweight. Whether these differences reflect genetic variation or have other causes not investigated in this study cannot be answered. Exploratory analyses of the regional distribution of the metabolic syndrome (20) have shown that common traits (Baden-Württemberg) and clear differences both exist compared with type 2 diabetes.

Conclusion
The prevalence data reported here for obesity as defined by BMI and increased waist circumference show that relevant regional differences exist in Germany. This documentation provides a good basis for developing targeted regional intervention strategies. It was surprising in this context, however, that high rates of obesity in individual German states were not automatically associated with a corresponding increase in the number of persons with type 2 diabetes. The reasons for these regional differences have not been explained thus far and require further studies.

Acknowledgement
This investigator-initiated study was funded by Sanofi Aventis Deutschland GmbH in Berlin. 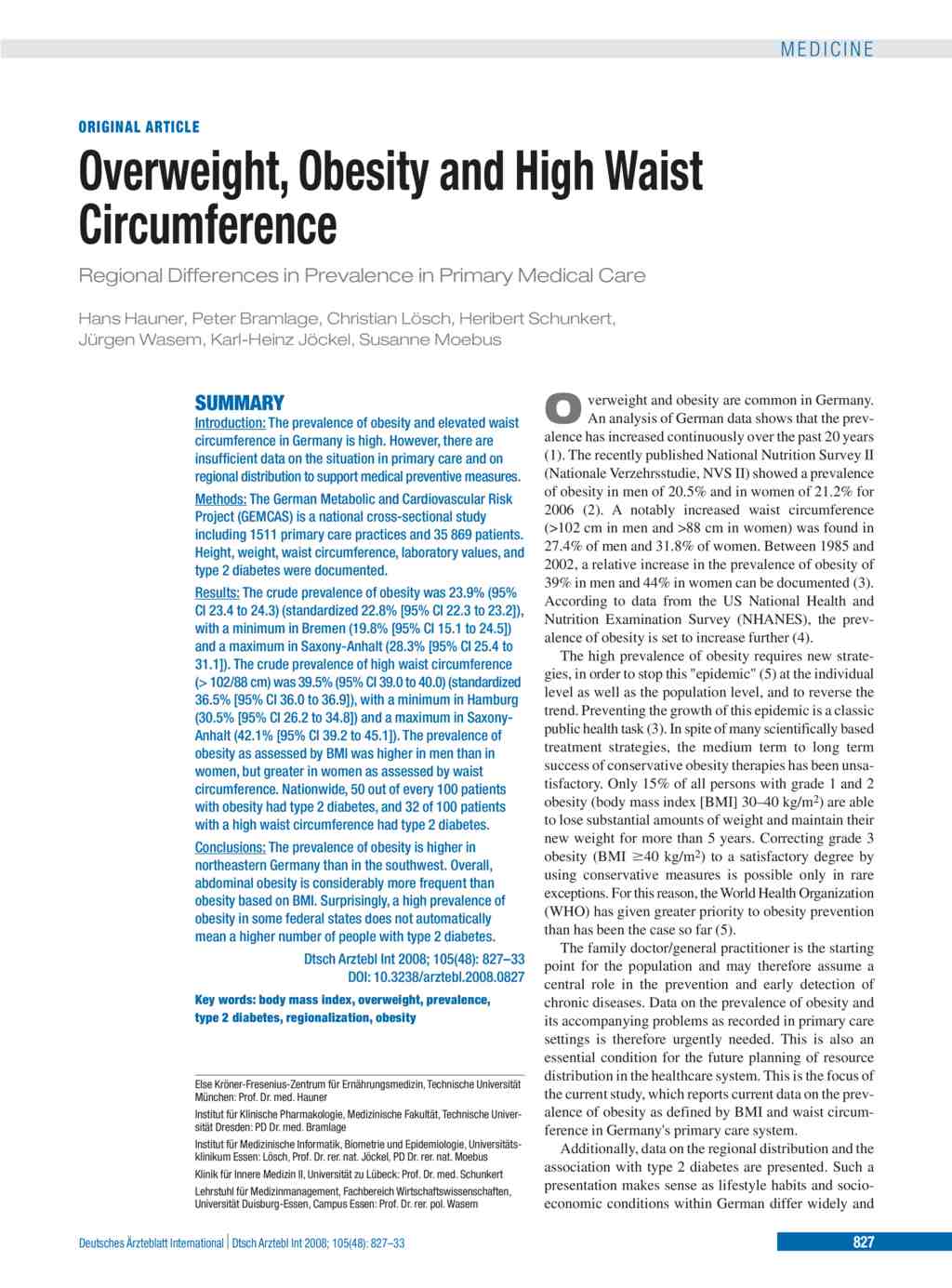