Fulminant Unilateral Pulmonary Edema After Insertion of a Chest Tube

a Complication After a Primary Spontaneous Pneumothorax

Case Report: Fulminant Unilateral Pulmonary Edema After Insertion of a Chest Tube: a Complication After a Primary Spontaneous Pneumothorax Introduction: The insertion of a chest tube in cases of large pleural effusion or spontaneous pneumothorax is a common surgical procedure often performed by a physician in training under the supervision of a senior physician.
Case presentation: The authors report the case of a 35-year-old man with a persistent, complete spontaneous pneumothorax of approximately 30 hours' duration. Within 90 minutes after insertion of a chest tube, he developed severe unilateral pulmonary edema and required mechanical ventilation.
Findings and clinical course: Computerized tomography revealed severe, unilateral pulmonary edema referred to as re-expansion pulmonary edema. After emergency endotracheal intubation and mechanical ventilation with continuous positive airway pressure, the pulmonary edema resolved completely and the patient recovered.
Conclusion: Re-expansion edema is a rare, potentially life-threatening complication of the drainage of a spontaneous pneumothorax. With early recognition and timely treatment, complete resolution can be achieved. Risk factors include rapid re-expansion of the lung, young patient age, and a large pneumothorax persisting longer than 24 hours. If these risk factors are present, the chest tube should be inserted without primary suction. Doing so allows the lung to re-expand more slowly and may prevent this severe complication.
Dtsch Arztebl Int 2008; 105(50): 878–81
DOI: 10.3238/arztebl.2008.0878
Key words: acute pulmonary failure, pneumothorax, chest tube, re-expansion edema, pulmonary edema

The following case report describes a rare and potentially life-threatening complication, which can occur during normal surgical procedures or occasionally during emergency treatment—the development of pulmonary edema after inserting a chest tube for spontaneous pneumothorax. This procedure is very often performed by physicians in training in surgery or in internal medicine, under the supervision of a specialist. If the risk of re-expansion edema is borne in mind, this can help to reduce the risk of this severe complication or at least help to ensure that it is rapidly and correctly treated. For this reason, the authors wished to address a large circle of physicians in training with this case report.

Medical history
A 35-year-old male patient came to the surgical out-patient clinic of the GPR Clinic in Rüsselsheim late in the evening, complaining of pain in the left side of his chest. He reported that he had been suffering twinges of pain, particularly dorsal to the shoulder blade, since heavy lifting the previous day (about 30 h previously). The patient was an otherwise healthy non-smoker who had twice been admitted to hospital five years previously for spontaneous right pneumothorax.

Findings
On auscultation, the patient was found to have no respiratory murmur on the left, and hyperresonant percussion, but without dyspnea. The chest x-ray in expiration showed pneumothorax left with completely collapsed lung and discrete mediastinal shifting to the right and phrenoptosis left, indicating developing tension (figure 1 gif ppt).

Clinical course
A control x-ray was taken approx. 15 min after the problem-free insertion of the chest tube. The patient was still clinically normal and auscultation showed that the lung had expanded. The x-ray confirmed that the lung had fully expanded. However, the position of the tube was not cranial, as intended, but mediastinal (figure 2 gif ppt). After his return from the department of radiology, the patient reported increasing chest pain and tickling in the throat, so that the tube was then retracted by 5 cm. A new x-ray was taken 40 min later. This showed the altered position of the tube and the marked reduction in the translucency of the left lung (figure 3 gif ppt). The patient was still complaining of tickling in the throat and pain, without subjective dyspnea or other symptoms. There was no blood in the tube. The patient's condition deteriorated relatively suddenly, but progressively, so that he finally was suffering from fully developed pulmonary edema (cough, foaming phlegm, dyspnea, initial tachypnea and tachycardia), as well as respiratory failure, which had to be treated with emergency intubation with mechanical respiration. Directly after this, a computed tomogram of the chest was taken, to exclude intrathoracic injury. The result showed marked ipsilateral pulmonary edema, designated as re-expansion edema (figure 4 gif ppt). There were also discrete visible contralateral changes, with minimal local edema formation. Because of the monolateral edema, which was clinically evident and could be seen in conventional x-rays, together with the discrete contralateral changes which could only be detected in computed tomography, this is designated as a case of unilateral re-expansion edema—in contrast to classical pulmonary edema, which is often seen.

There was an interval of about two and a half hours between the first x-ray after inserting the chest tube and the computed tomogram of the chest.

The patient was rapidly stabilized under automatic CPAP (continuous positive airway pressure) respiration with the high initial FiO2 of 80% and short-term therapy with catecholamines and diuretics. On the following day, his spontaneous respiration was adequate, his oxygenation good, and the radiological and computed tomography findings had markedly improved. He could therefore be extubated. Computed tomography showed that apical bullae were the cause of the spontaneous pneumothorax. After the patient's general condition had stabilized and he had been prepared for surgery, resection of the pulmonary apex was performed, together with partial pleurectomy, using VATS (video-assisted thoracic surgery). The subsequent intra- and postoperative course presented no problems. After timely removal of the chest tubes inserted during the operation, the patient was released from hospital with normally expanded lungs (figure 5 gif ppt).

Discussion
Occurrence of re-expansion edema is a rarity (<1%), although there are descriptions in the international literature and a few retrospective and animal studies (1, 2).

Unilateral re-expansion edema has been described as a rare complication during pneumothorax therapy and in the treatment of extensive pleural effusion, with a mortality of up to 20% (3, 4).

The clinical and radiological manifestations vary from bland radiological findings with asymptomatic patients to a fulminant course with respiratory failure and shock symptoms. The main risk factors are

- young age of patients,
- large and persistent pneumothorax (>24 h), and
- rapid re-expansion of the lung.

Re-expansion edema usually occurs ipsilaterally. There have however also been descriptions of cases of bilateral or even isolated contralateral expansion (3–12).

The underlying pathogenetic process has not been completely clarified and seems to be multifactorial. The following mechanisms may initiate increases in the microvascular and alveolar permeability and have therefore been discussed as possible causes of the development of pulmonary edema and of the occasional fulminant character of this condition:

- The release of mediators, in particular IL-8 (interleukin 8), MCP1 (monocyte chemoattractant protein 1), leukotriene B4
- Loss of surfactant
- Induction of oxidases leading to apoptosis of alveolar and endothelial cells (13–17)

The increase in capillary permeability leads to fluid passage into the interstitium or into the alveoli, causing pulmonary edema.

In most case reports, the first symptoms developed within the first hour after re-expansion of the collapsed lung. On the other hand, latency periods of up to 24 h have been described. Treatment is symptomatic. Depending on the severity, it may be adequate to monitor the patient's heart and respiration, with mild oxygen treatment and no additional measures. On the other hand, with fulminant cases as here, invasive or noninvasive CPAP respiration may be necessary.

If the patient exhibits the risk factors, it is recommended that the chest tube should not be immediately connected to suction, but that only the surge tank should be used initially. This can ensure that the lung expands more slowly (18). Suction should only be carefully applied if the lung fails to expand. There are however as yet no evidence-based data to support this procedure to avoid re-expansion edema.

Conclusion
Although there have been no large studies on the risk factors and on the procedure for extensive pneumothorax or large effusion, there are empirical data indicating that removing more than 2 liters of air or effusion from the pleura markedly increases the risk of re-expansion edema. The possibility of this complication is often neglected. Risk factors and procedures to avoid or alleviate this complication are not generally known.

In spite of or perhaps because of the rarity of clinically relevant re-expansion edema after tube treatment of spontaneous pneumothorax or extensive pleural effusion, it is important that hospital doctors should be aware of this complication, the corresponding risk factors (young patient, large and protracted pneumothorax [>24 h], rapid re-expansion of the lung) and the possible prophylactic procedures. Even though these procedures cannot reliably prevent re-expansion edema, awareness of this life-threatening complication allows early diagnosis and rapid initiation of the necessary treatment.

Key messages
Enlarge All figures
Fulminant Unilateral Pulmonary Edema After Insertion of a... 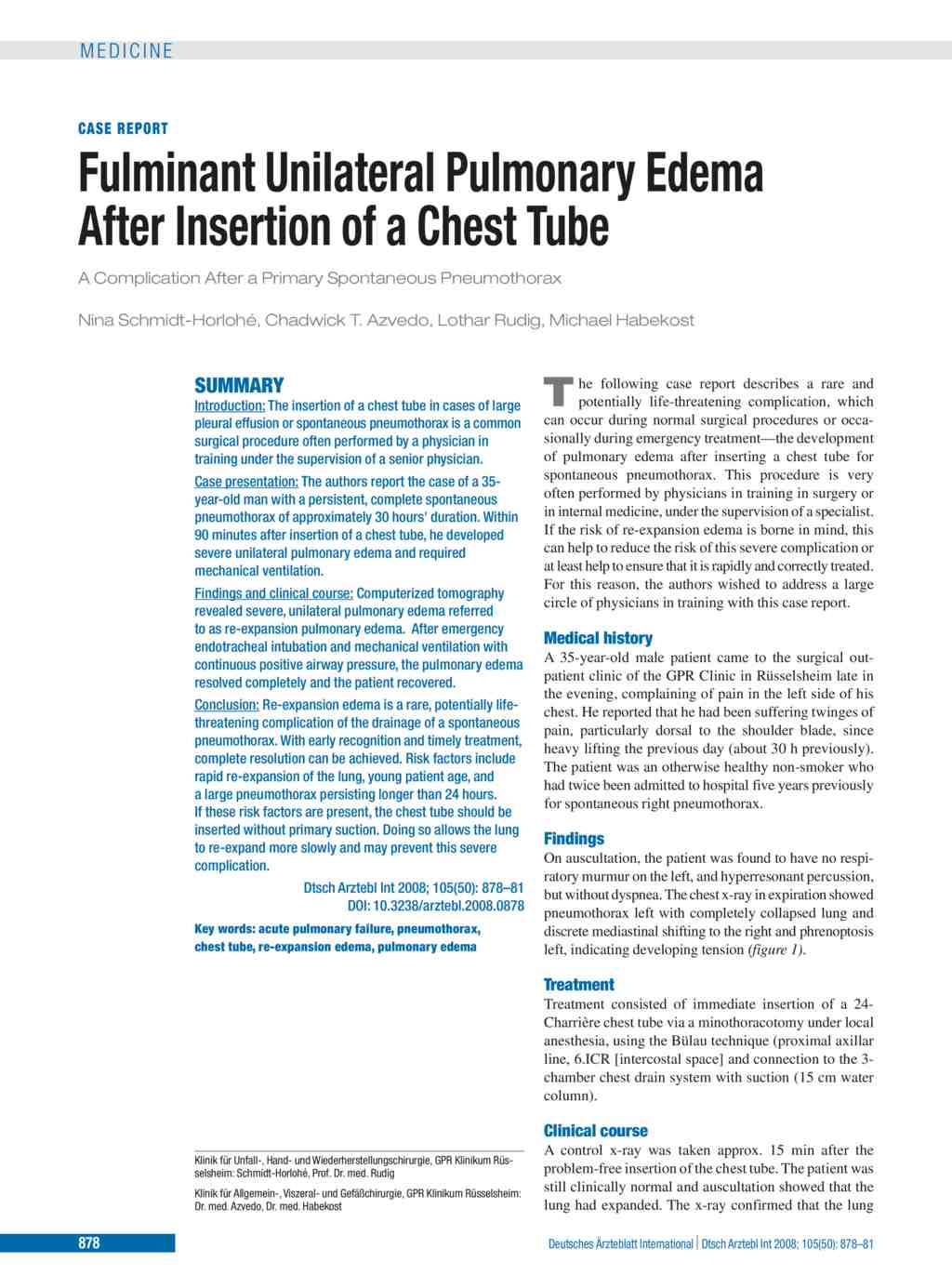