The Check-up Before Publication

Much time often elapses before a scientific article is published. The research itself, writing the article, and the peer-review process are three major way stations along the often long and rocky road to publication. Yet, before the article finally appears, it must still undergo another round of meticulous revision by an editor, this time for style. What, exactly, happens in this final editorial check? And does it really make the article more accurate and easier to read?

Evaluating editorial work
Large medical periodicals, including Deutsches Ärzteblatt, generally publish peer-reviewed articles only after a final editorial revision. This involves correcting the article's linguistic usage, spelling, and punctuation, as well as adapting it according to the journal's rules for style and layout. Short sentences and the use of the active voice facilitate understanding. Tables and figures should appear in standardized form, and the reader should be able to understand them easily without referring back to the text. The goal is to make the article more readable and to improve the transfer of knowledge from the author to the reader—for the ultimate benefit of the patient.

A number of scholarly studies have addressed the question whether this goal is actually achieved. A systematic Cochrane review by Wager and Middleton (1) identified 18 studies of the effect of editing, only two of which were randomized and controlled. The remainder either compared different periodicals against each other, or else compared articles in a single periodical before and after an intervention. Research of this type is directed to the following questions:

- Does editing improve the text?
- Do the editors' suggestions to the authors improve the quality of the manuscript?
- Are the summaries accurate and detailed?
- Is the reference list free of errors, and do the citations accurately represent the content of the cited material?

Editorial revision
The studies analyzed by Wager and Middleton are of highly diverse types, and the main topic of their research, readability, is difficult to assess. In eight of these studies, editorial intervention was found to have improved readability. Yet the texts were judged by nonvalidated criteria that varied greatly across studies, with the result that useful comparisons of one study to another generally cannot be drawn. Two commonly used instruments for measuring readability were the Flesch score and the Gunning Fog Index (box 1 gif ppt).

With respect to these classifications and the other criteria that were used, e.g., the practical applicability of the information provided or differences between the main text and the summary, it was found that editorial revision indeed significantly improved readability. For some articles, however, the degree of improvement was no more than moderate: the articles were still judged to be hard to understand even after editing.

An analysis of articles published in the British Journal of Surgery arrived at similar conclusions. The readability of submitted and accepted manuscripts was the same, i.e., editorial revision had apparently not improved them, even though their mean Flesch score increased from 20.5 to 24 points, a significant difference (p < 0.001). The editors had shortened the texts by an average of 7.8% (3); they had significantly shortened the sentences, lowered the number of sentences per paragraph, and reduced the average word length.

Manuscripts by authors whose mother tongue was not English were more readable than those by native English-speakers (Flesch score ca. 19 vs. 22; p = 0.016 (3). This may be because native speakers formulated more complex sentences and used longer words.

Compliance with the editors' suggestions to the authors
The editors of all scholarly journals presumably make suggestions to the authors of submitted manuscripts, yet these suggestions are not necessarily read or followed. Such has been our experience in the editorial office of this journal, and such was also the finding of a randomized study (4). Pitkin and Brangan randomized 250 manuscripts that were to be revised: All of these manuscripts contained inconsistencies that had to be corrected, either within the summary (abstract) itself or between the summary and the main text. The authors in the "intervention group," but not in a control group, were given specific instructions about the problem. In both arms of the study, about one-quarter of the texts still had the same errors after revision (5). This shows that the authors paid no attention to the editors' remarks.

Accuracy of citations
A number of studies have checked the accuracy of a total of 15 000 citations of the literature. On average, 39% of them were found to contain incorrect bibliographical references (range, 4% to 67%). Moreover, in 20% of cases (0% to 44%), the cited source did not support the contention that the authors attributed to it (1).

Informational content of summaries
The most frequently read part of any scholarly article, after its title, is its summary (abstract) (6). Clearly, therefore, the writing and editing of the summary deserve meticulous attention.

Pitkin studied whether assertions made in the summaries were consistent with the main text of the article. Although this is a matter of content that ought to be dealt with in the process of peer review, a number of renowned journals also review their articles for content at the editorial level. In a study of six general medical periodicals—the British Medical Journal, Lancet, JAMA, the New England Journal of Medicine, Annals of Internal Medicine, and the Canadian Medical Association Journal—Pitkin found errors in 39% of the summaries overall (5), albeit with much variation among journals (range, 18% to 68%). These results motivated JAMA to undertake an internal review of all submitted abstracts according to a specific set of criteria (6). An evaluation later showed that the internal review was successful: the JAMA editors significantly reduced the frequency of inconsistencies between the summaries and the main text of the articles with respect to data or important results, as well as the frequency of unjustified conclusions (8).

Wager and Middleton, in their Cochrane study, concluded that peer review and editorial revision do, in fact, improve scientific articles (1). The editors succeed in enhancing the articles' readability, even if most of these texts still fall short of the readability of newspaper articles on complicated topics. Thorough editing can improve the summaries and the references as well. There is not enough evidence for a clear answer to the question whether editorial suggestions to the authors have a beneficial effect.

The procedure at Deutsches Ärzteblatt
The studies mentioned support the contention that intensive revision of accepted manuscripts makes them more readable. The editors of Deutsches Ärzteblatt are also convinced that this is the case. All of our articles are intensively revised before they are published. We have assessed the number of corrections per manuscript in a random sample of 20 articles. For example, in a six-page article with 2300 words, the average number of editorial changes is 293 (standard deviation, 74.7) Thus, on average, about every tenth word is changed. Most modifications concern sentence construction: shorter sentences, active instead of passive voice, verbal rather than nominal style, and disambiguation of potentially misleading passages. Tables and figures should appear in standardized form and should be understandable without reference to the text. We also correct the articles' punctuation and spelling and adapt them to the house style, e.g., with regard to the writing of numbers and units. The editing process can also reveal errors that have escaped detection in peer review.

Before an article is published, the author approves the edited version, the layout people create the pages as they are to appear in the finished text, and a final proofreading is performed. Only then can the article appear in print.

Not all authors are aware that the text might be changed again after the process of peer review. This is, indeed, the case for only a minority of scholarly journals. Many journals, especially smaller ones, lack the resources for editorial revision. Some authors are concerned that editing might alter the content of their articles and lead to the publication of incorrect assertions. This is why proofs of the articles are sent to the authors for correction before they go to press. It goes without saying that an article can only be published when its author has approved the final version. In 10 randomly chosen articles that were approximately 2300 words long, an average of 64.1 (standard deviation, 54.5) corrections were made by the authors, but most of these did not involve editing changes. In our experience, the overwhelming majority of authors are highly satisfied with our editorial revisions.

Conflict of interest statement
The author is a managing editor in the science and medical section of Deutsches Ärzteblatt and edits manuscripts that appear in it. 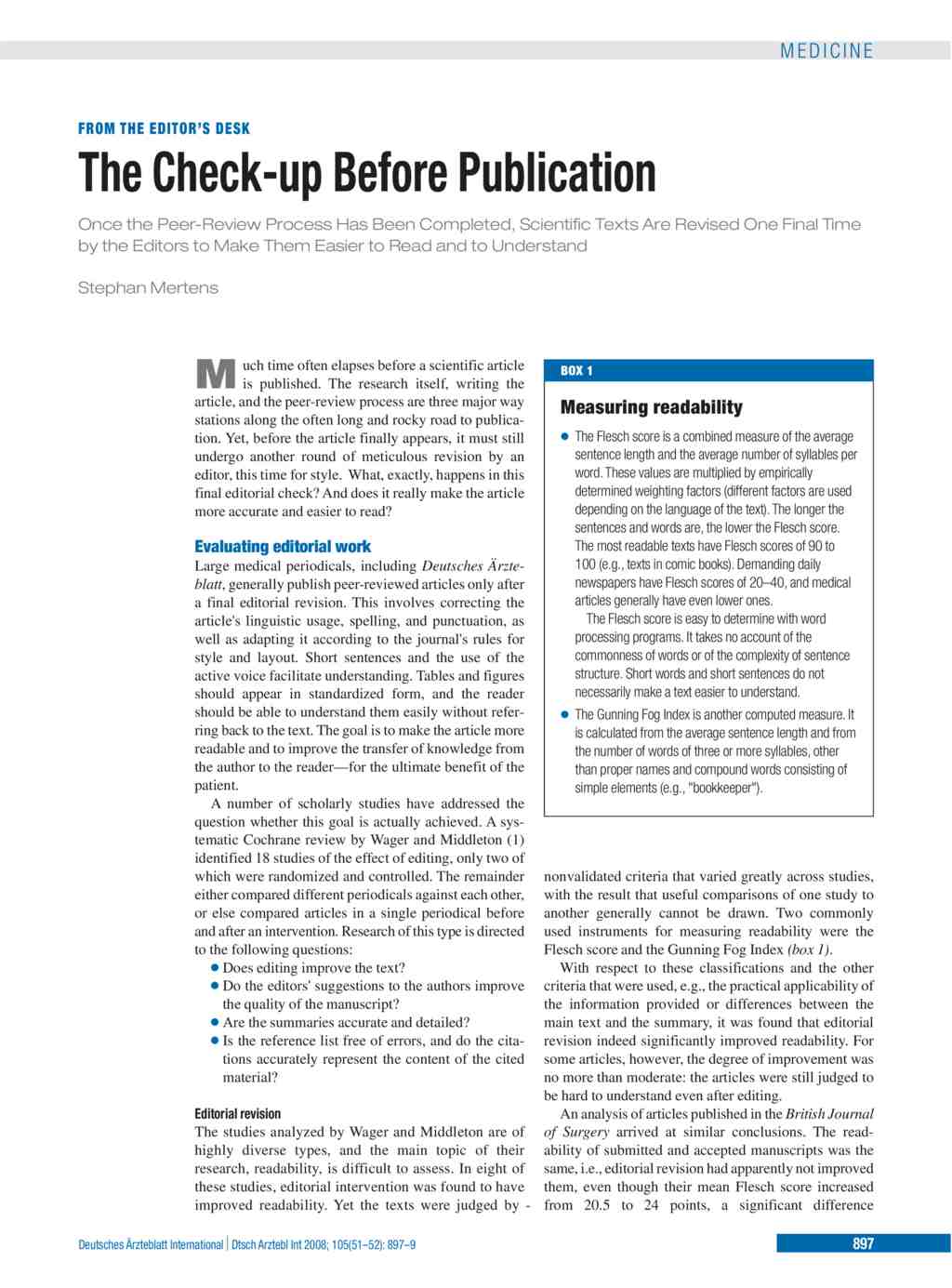