The major international databases for medical articles have welcomed this new publication. Less than a year after its foundation, Deutsches Ärzteblatt International was evaluated for both form and content by the National Library of Medicine (NLM) of the USA, which decided in November 2008 to include it in Medline. Medline, far and away the most important of all specialized medical databases, is known to readers worldwide through the NLM Internet portal "PubMed."

The inclusion of Deutsches Ärzteblatt International in Medline comes on the heels of the noninclusion of Deutsches Ärzteblatt in its original, German-language edition, which submitted several applications for inclusion in the past but was rejected each time. We believe that the reasons were not only the language, but also the mixed structure of the journal: Although Deutsches Ärzteblatt produces, under the heading "Medicine," about 120 original and review articles every year—more than many purely scientific periodicals do—, the journal devotes a considerable portion of its articles to social and health policy, which gives it the appearance of a news magazine.

At about the same time that the National Library of Medicine reached this decision, the Thomson Reuters company (Philadelphia, USA) decided, after thorough consideration, to give our international edition an impact factor. The analyses needed for this will begin in 2009, and we expect the first impact factor for Deutsches Ärzteblatt International for 2011. The impact factor remains the most important measure for evaluating scientific journals; it plays an essential role in the assessment of universities, academic departments, and individual scientists. Thus, many authors, particularly those in university hospitals and departments, find themselves obliged to publish as much as possible in journals with impact factors. The increased attractiveness of such journals to prospective authors makes them more attractive to readers as well.

With so many medical journals and so many articles being published in them, the importance of databases in medicine is immediately clear. Complete figures are lacking, but the National Library of Medicine alone—the world's biggest medical library—holds 23 000 periodicals, of which 16 000 are journals in the narrower sense, and fewer than one-third of the latter are included in Medline (the overwhelming majority of them in English). Because of the multiplicity of journals and articles, electronic databases such as Medline are indispensable for searching the literature for particular subjects, much as the subject index of a scientific library is needed if one wants to search systematically for relevant books.

The German Association of Medical Schools (Medizinischer Fakultätentag) reports that each medical school in Germany publishes, on average, about 1000 articles in peer-reviewed journals per year. From October 2007 to September 2008, Medline indexed more than 670 000 new citations, with the result that the database now includes roughly 17 million entries, ranging from letters to the editor to original articles. More than 64 million search inquiries are made via Medline every month. It is remarkable that the National Library of Medicine makes this service available to all users free of charge.

Thus, the inclusion of Deutsches Ärzteblatt International in Medline and the granting of an impact factor do indeed constitute a recognition of the scientific quality of the "Medicine" section of our journal, but they are not an end in themselves. Rather, they serve to make our original and review articles more accessible to the worldwide community of physicians and medical scientists. For the same reason, we are glad that Deutsches Ärzteblatt International is now included in other databases as well: Embase and Scopus (medicine), along with PsycINFO (psychology) and Cinahl (nursing and allied health professions). All of this increases the attractiveness of Deutsches Ärzteblatt, and the main beneficiaries will be our readers and authors. 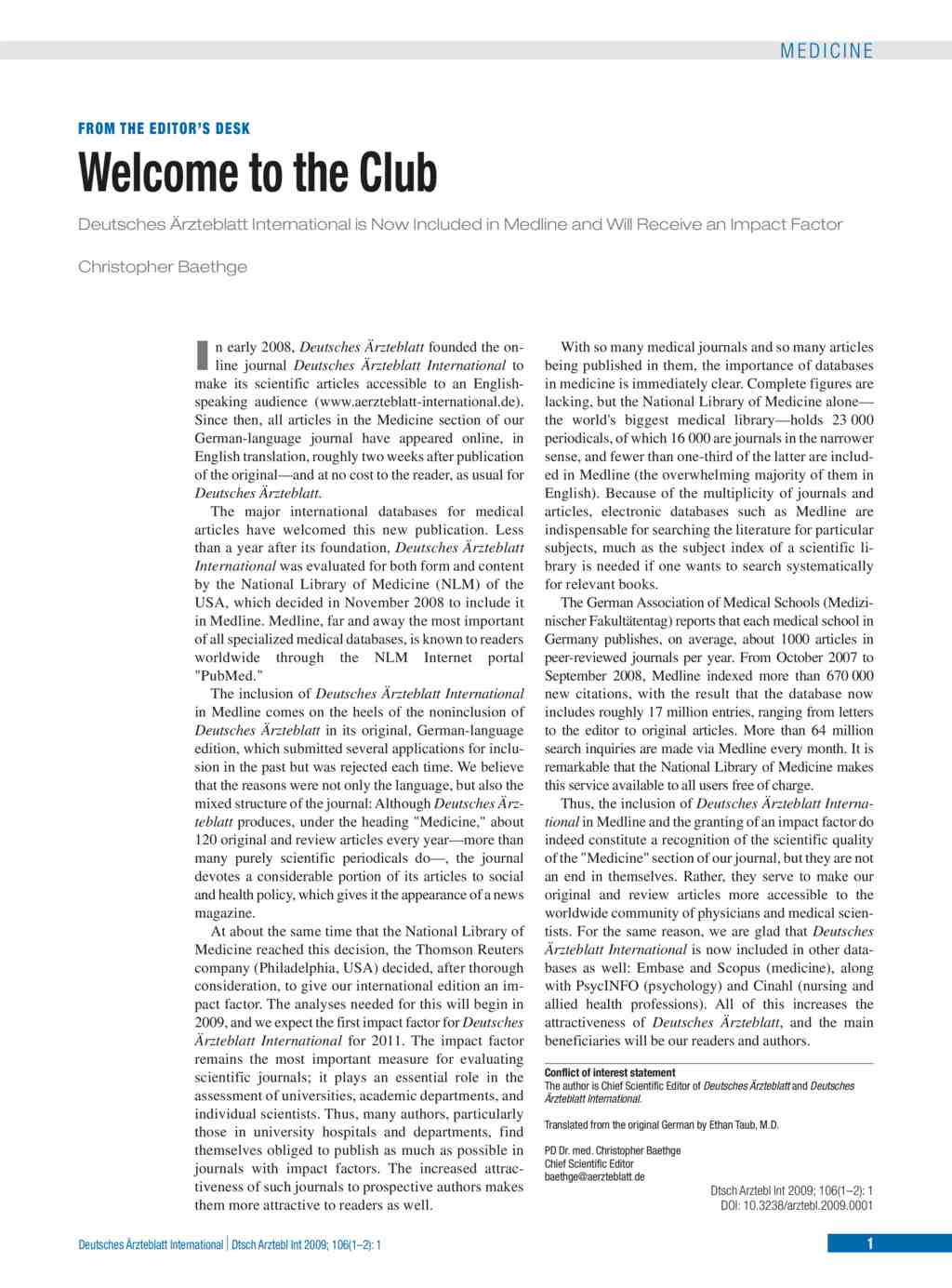