DÄ internationalArchive4/2009Pertussis – Not Only a Disease of Childhood: In reply

Pertussis – Not Only a Disease of Childhood: In reply

We are delighted that our article has sparked such a lively debate. Dr Mülleneisen reminds us of problems in everyday medical practice: Serological tests for Bordetella pertussis often entail IgM antibody measurements. In contrast to other infections, however, the importance of IgM antibodies is questionable, since these antibodies react mainly with the lipo-oligosaccharide and other components of the cellular wall and are therefore often false positives. As we explained in our article, measuring IgG and IgA antibodies to pertussis toxin (PT) is the best validated method and is least prone to non-specificities.

For treatment with antibiotics, we did mention the problem described by Mülleneisen. Antibiotics are not effective for symptom relief in patients who have had a cough for a while, but they may reduce transmission of the infection.

Dr Windhövel describes that administering promethazine and dihydrocodeine yielded success in an adult patient. Promethazine has been mentioned in several earlier case reports, although its efficacy cannot be assessed; Dihydrocodeine has mostly been classified as ineffective. Other possible cough relieving drugs such as diphenhydramine, salbutamol, dexamathasone, and pertussis immunoglobulin have been investigated in controlled studies in children, but no proof of efficacy has been found (1).

Controlled studies of treatment in adults are lacking. This does not exclude that medications may be effective in individual cases; but no therapeutic recommendations can be concluded from such cases.

The frustration about the lack of drug treatment to relieve the painful symptoms resulted in so called "whooping cough flights" in the middle of the 20th century, during which patients were exposed to a period of lower oxygen pressure in an airplane.

Professor Shah worries that using azithromycin in pertussis may result in increased resistance of Streptococcus pneumoniae to this macrolide. The current S3 guideline recommends macrolides for respiratory tract infections as the primary alternative to aminopenicillins if antibiotic treatment is indicated (2).

A recently published study found more macrolide resistant alpha haemolytic streptococci immediately after azithromycin had been administered, but this effect had disappeared after 12 weeks (3). Erythromycin resistant strains of B pertussis have been described in the US; these are caused by a mutation to the binding site in the bacterial 23S ribosomal RNA gene. This mutation was found as early as in the 1980s in individual strains; but all strains tested in Europe so far have been sensitive to erythromycin. The resistance situation vis-à-vis macrolides should be monitored in future by the national reference laboratories; however, general testing of all isolates still does not seem indicated. Fluoroquinolones are effective against B pertussis in vitro, but clinical studies of their use in adults are lacking.

In sum, the discussion shows again that the only effective measure against pertussis is preventive immunization/vaccination of all susceptible persons.
DOI: 10.3238/arztebl.2009.0058 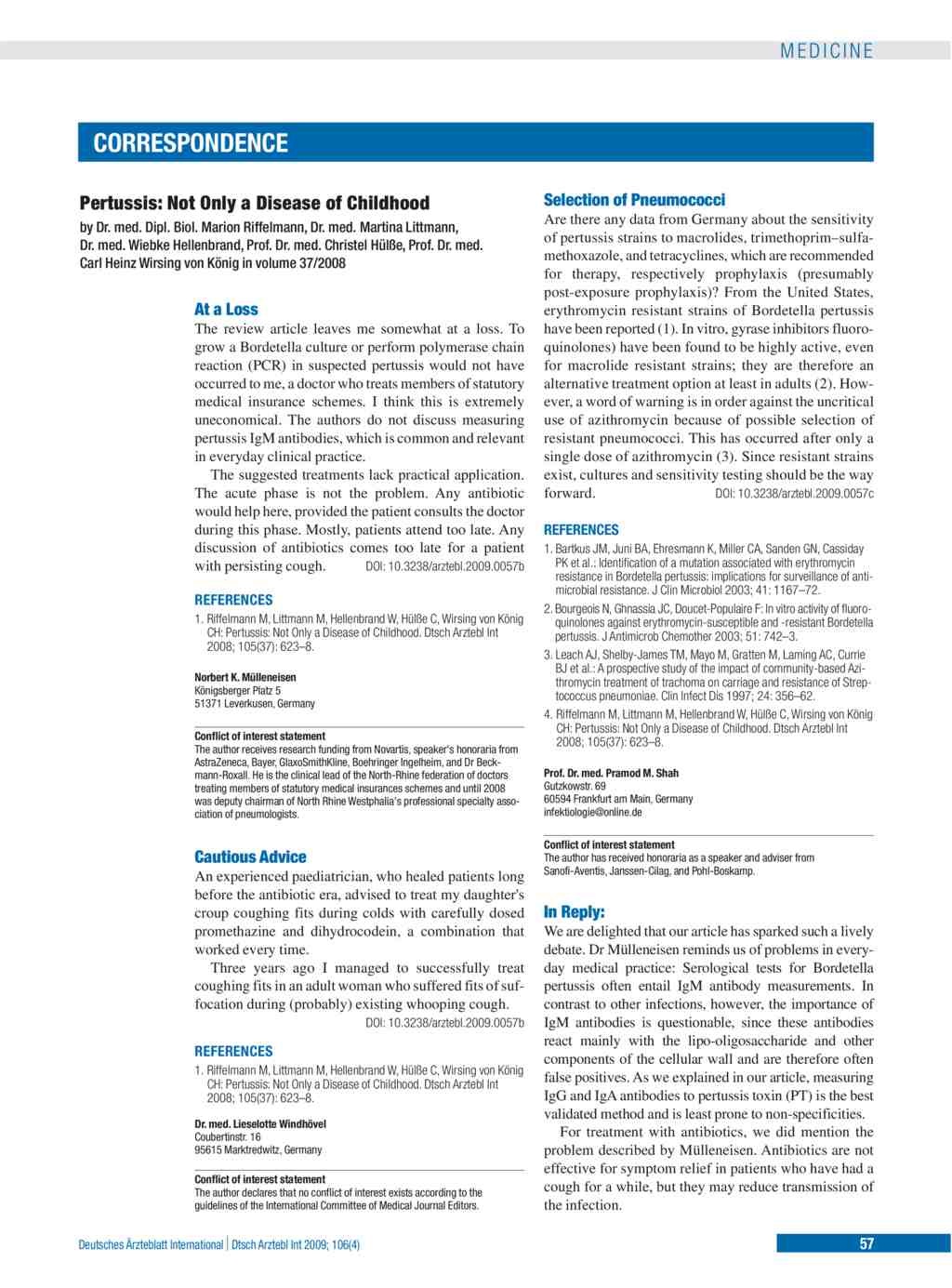