Background: The long-term outcome of patients requiring cardiopulmonary resuscitation depends heavily on swift and appropriate care. The aim of this study was to obtain data on the composition and training of resuscitation teams in specialist departments for internal medicine and anesthesiology.
Methods: Between October 2006 and February 2007, 440 questionnaires were sent to departments for anesthesiology and internal medicine (with more than 300 beds) in Germany and to university hospitals in Switzerland and Austria.
Results: The response rate was 38%. Of 166 participating hospitals, 152 have an emergency team. Resuscitation training (RT) takes place in 111 hospitals. Ninety-two hospitals (55%) hold a course more than once a year. Of those hospitals with RT, 86% use a simulation dummy, 77% conduct theoretical tutorials, and 65% follow a fixed algorithm.
Conclusions: The majority of hospitals that participated in this survey have an emergency team in place and organize resuscitation training for their medical personnel. The training varies greatly, however, in frequency, size of group, and qualification of the trainer. Implementation of standardized training for and management of in-hospital resuscitation measures might further hone staff skills and therefore improve the long-term outcome for the patients concerned.
Dtsch Arztebl Int 2009; 106(5): 65–70
DOI: 10.3238/arztebl.2009.0065
Key words: resuscitation, emergency medical care, cardiac arrest, training model, hospital doctor

The long-term outcome of patients requiring resuscitation after cardiac arrest, whether in hospital or out of hospital, depends heavily on swift and appropriate care (1, 2).

First aid courses, e.g., as part of the training for driving tests, or as further training in certain occupations, offer a wide variety of training in basic life support (BLS) for laypersons. In contrast to this, physicians in Germany are only required to undergo resuscitation training (RT) while they are still studying, as part of the procedure for registration to practice. Neither anesthetists nor doctors of internal medicine are required to refresh their knowledge of BLS and advanced cardiac life support (ACLS) as part of their continuing education. Resuscitation situations are quite rare in clinical practice, too rare to allow clinicians simply to acquire the necessary skills through experience over time (3). Several studies have shown knowledge of BLS and ACLS to be alarmingly low among physicians (4–8).

This study sets out to define what German-speaking hospitals offer in terms of in-hospital RT, what the training includes, and how it is carried out. In addition, it characterizes who usually performs the resuscitation.

Methods
Between October 2006 and February 2007, 220 questionnaires were sent to departments of anesthesiology and internal medicine in German hospitals and to seven university hospitals in Austria and Switzerland. The questionnaires were addressed to the head of department or of the hospital. The hospitals were selected from data retrieved from the German Federal Statistical Office (9) and internet searches. They were divided into three groups:

Twenty-five percent of hospitals in groups B and C were chosen at random, and all the university hospitals were included. Some hospitals in groups A and B in particular had several departments of internal medicine, and some of them had two anesthesiology departments; in these cases two of the available departments were chosen to be approached (table gif ppt) (in some cases several physicians from different departments within one hospital were approached). In a few cases (n = 12) letters remained undelivered despite several attempts because of errors in the address information.

The questionnaire (e-questionnaire [original questionnaire, hence not translated]), which we developed ourselves, contained 40 questions, some of them multiple choice, relating to three broad themes:

The anonymized data were analyzed statistically using the SPSS package (version 15, SPSS Inc.). Results are given as medians and first and third quartiles or as percentages and absolute values, as appropriate.

Characteristics of Respondents and Hospitals
Eighty-eight (53%) of the physicians who responded held the position of senior physician, 21 (13%) were junior doctors, and 32 (19%) were consultants. In response to the question when they last took part in a resuscitation procedure, 64 (39%) of the physicians said that they had recently (<10 days) been involved in treating a patient who was in cardiac arrest. Most of the physicians who had recently taken part in a resuscitation (44% of those who gave this answer) worked at a university hospital, more of them in an internal medical department than in an anesthesiology department (16 vs. 12 physicians).

Resuscitation Team
One hundred and fifty-two physicians (92%) indicated that a defined resuscitation team existed in their hospital. On average, these teams were made up of a physician (1; 2) (first quartile; third quartile) and 1.5 nurses (1; 2). The mode of alarm and the make-up of the resuscitation teams is shown in figure 1 (gif ppt).

One hundred and twenty-two (80%) of the physicians in the resuscitation teams worked on an intensive care units, 8 (5%) in an operating room, and 9 (6%) in emergency units (13 gave no information). Eighty-three (55%) had a specialist qualification. Eighty-three (55%) of the nurses in the resuscitation teams had also undergone further specialist training. One hundred and ten (66%) of the physicians who responded said that they used a checklist to document a resuscitation situation.

Resuscitation Training
One hundred and eleven (67%) of the returned questionnaires contained the information that resuscitation training was in place in the hospital concerned; in 55% of cases this was carried out more than once a year (figure 2 gif ppt). Specifically the members of the resuscitation team were trained in 52% of cases—once a year in 39 cases, twice a year in 27 cases, and more often in 7 cases (no information in 11 cases). Thirty-eight percent of questionnaires said that, in addition, the hospital physicians received training elsewhere. Thirty responders (18%) said that their hospital supported their receiving training outside the hospital by providing financial grants and/or giving time off work.

Ten (6; 12) persons were given instruction by an average of 2 (1; 2) trainers for 90 (60; 150) minutes on theoretical and practical aspects of BLS and ACLS. The physicians said that on average 4 (2; 6) trainers were available for RT in their hospital, most of these trainers (52%) working in the anesthesiology department. Thirty-four responders (31%) said that a trainer with specialist training in giving RT was available.

In answer to the question about the form of the training, 65% (n = 72) of the questionnaires said that a fixed algorithm was practiced. In 91% of cases (n = 110) BLS was practiced and in 67% (n = 74) ACLS. In 86% (n = 96) of all training units a simulation dummy was used, and 77% (n = 86) also included a theoretical element on the resuscitation guidelines (multiple answers were possible). In their free text, 60 respondents (54%) gave a more or less detailed description of organized RT with the basics of hands-on practice of ACLS, ECG diagnosis and defibrillation training. Ninety physicians (81%) indicated (check box) that they aimed at a ratio of thoracic compression to ventilation of 30:2 (this is in accordance with the 2005 international resuscitation guidelines [10, 11]).

One hundred and forty-six participants (88%) thought that resuscitation training was very worthwhile, 14 (9%) thought it was worthwhile, and only 2 (1%) regarded this form of further training as not worthwhile (4 [2%] did not answer).

Discussion and résumé
In 1991 the American Heart Association introduced the "chain of survival" concept as a teaching aid for optimally efficient resuscitation (1). The aim of this concept, with its four elements of early access, early cardiopulmonary resuscitation, early defibrillation, and early advanced cardiac life support (ACLS), is to reduce the large annual number (300 000 to 400 000 [12, 13]) of sudden cardiac deaths. This chain of survival is important not just for the out-of-hospital sector, but should also be the goal of in-hospital resuscitators (13) (see also current guidelines [10, 11]). The survival rate after resuscitation in hospital is still only 14% to 17% (14, 15).

Numerous publications in recent years highlighted considerable knowledge deficits even among physicians in regard to how to carry out resuscitation swiftly and competently (4–8, 16, 17). Despite this, although the RT opportunities for laypeople have been increased in recent years, there is still—unlike in the Anglo-American countries—no requirement for physicians in Germany to attend regular refresher courses on ACLS and BLS (18).

The results of this survey showed that 67% of anesthesiologists and internists attended RT courses in their own hospitals. Thirty-eight percent of respondents stated in addition that physicians at their institutions attended RT courses elsewhere. These courses were described almost unanimously as worthwhile; this judgment is also reflected in the 38% response rate to the survey.

Nevertheless, the response rate is a weak point of this study. Because the survey was anonymous, it was impossible to write to the hospital physicians a second time or to telephone them in order to try to increase the response rate. In addition, like most questionnaire-based surveys, the results are probably biased because those who are already convinced of the usefulness of a given activity are the most likely to respond to a survey about it.

One must always be very cautious about the truth value of the results of questionnaire surveys. A survey by the German Sepsis Society (SepNet, Competence Network Sepsis), for instance, showed some spectacular discrepancies between participants' self-assessments and the actual facts (19). Thus, it may be assumed that the number of RT courses in all hospitals is probably lower than reflected in the results of this survey, and also that caution is needed in assessing the truth value of the statements made by the responding physicians.

Most of those asked (55%) stated that at their institution an RT course was attended more than once a year (figure 2). It is already known from several studies that knowledge acquisition is optimal in those who attend RT at regular intervals (20, 21). It has been shown that intervals up to a maximum of 6 months are best (20, 22). This is likely to be particularly true for emergency team members. In 2004, Tok et al. published alarmingly poor results for members of a Turkish resuscitation team in respect of quality of cardiopulmonary resuscitation (23). These authors are not alone in saying that members of resuscitation teams in particular must receive regular training in resuscitation skills. In the present survey, 52% of respondents stated that explicit training was given to all resuscitation team members, but it was offered to them more than once a year in only 40% of cases.

Although there were many similar elements in the training courses—e.g., use of a simulation dummy (86%)—there were also a number of differences as to what was taught, group size, and the frequency of training. Introduction of standardized training could perhaps increase levels of knowledge. According to the recommendations of the European Resuscitation Council, the best results are achieved by keeping training groups as small as possible (4 to 8 people) and including a test at the end of the course (22). The Council also requests that all those who give RT courses should themselves have undergone special training to do so, because the trainer's qualification is automatically reflected in the effectiveness of the resuscitation exercise (24). Thirty-one percent of the physicians who responded to the present survey said that a specially trained trainer was available in their institution. Clearly there is room for improvement here as well.

Translated from the original German by Kersti Wagstaff, MA (Cantab). 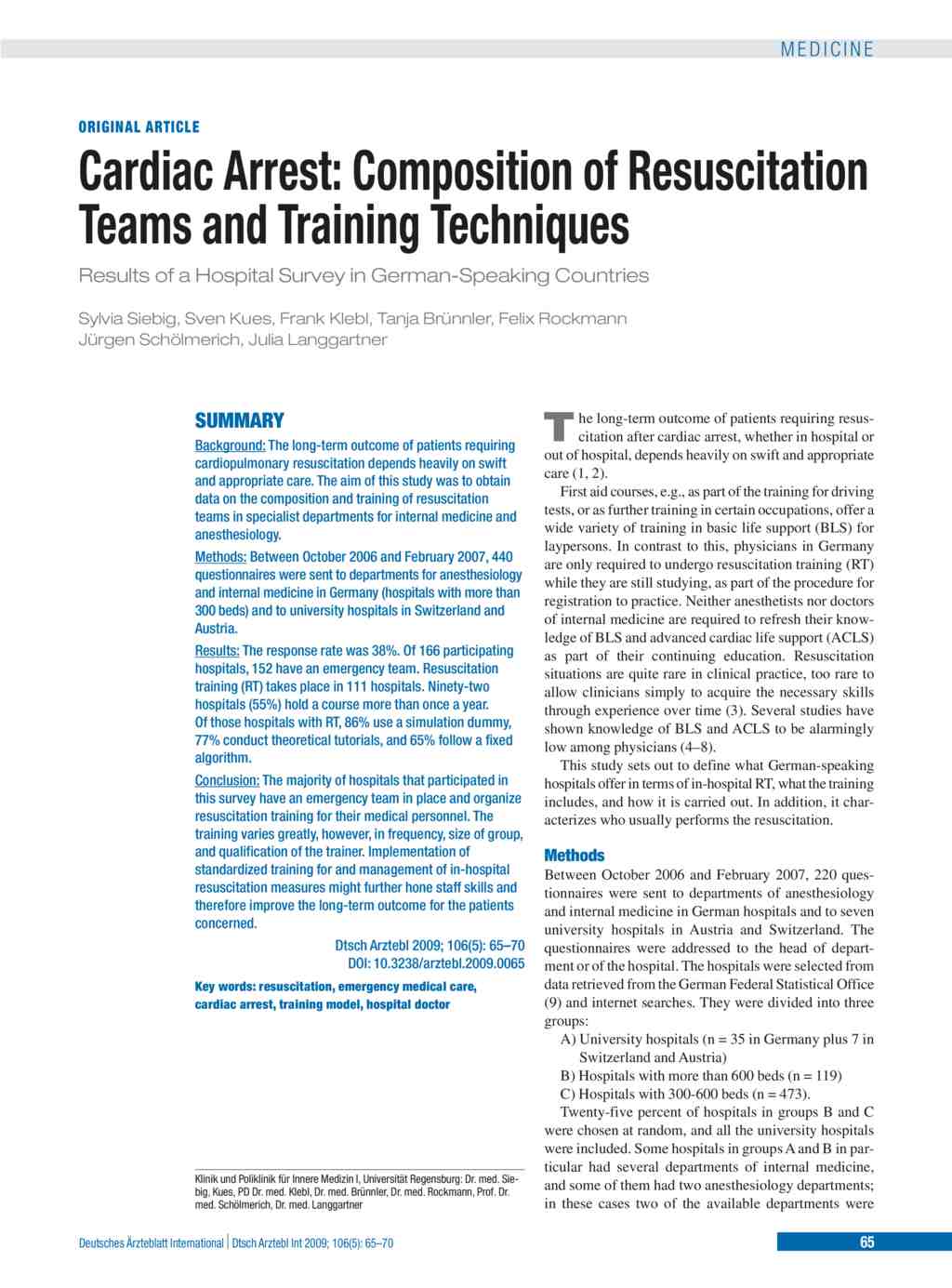