Emergencies Associated With Pregnancy and Delivery – Peripartum Hemorrhage: In reply

The cardiovascular side effects after administration of uterotonics have been underestimated for a long time. However, all uterotonics can be expected to have side effects, since the desired effect of muscular contraction is not confined to the uterus. On the other hand, rapid use of uterotonics in patients with uterine atony can save lives.

The substance of choice is oxytocin. Accurate dosing is crucial when oxytocin is given via bolus application. The complications you described have occurred when a bolus of 10 IU oxytocin was given. A maximum single dose of 3 IU oxytocin should therefore not be exceeded. In exceptions, a second bolus dose of 3 IU can be considered at a later stage (maximum 6 IU in the table). The dosage of 6 IU in box 1 (two individual doses of 3 IU) is misleadingly put because one might wrongly conclude that 6 IU oxytocin can be used as an individual dose.

Routine application of 3 IU oxytocin after severance of the umbilical cord (in spontaneous births) accelerates the placental period and increases muscle contraction. It leads to a reduction of postpartum blood loss and stimulates local uterine vasoconstriction, thus lowering the risk of atonic hemorrhage (1). Bolus administration of oxytocin is therefore not generally to be regarded as contraindicated. In a scenario of prophylactic application (for example, in the context of a cesarean section), the infusion is usually started immediately.

Methyl ergotamine is no longer used in many treatment centers because of its cardiovascular side effect profile (vasospasms). The substance is not used in our center.

Application of prostaglandins can also be expected to have important side effects. The drug should not be the medication of choice.

Data supporting the recommendation of early embolization are currently still lacking. The logistic conditions have to be right if the procedure is to be done in a risk free manner. It is not recommended to transfer a patient who has given birth and hemorrhages owing to uterine atony to a radiology ward at 2 o'clock in the morning to undergo embolization. Better therapeutic options are available (B-Lynch suture, tamponade, uterotonic drugs). In patients with an existing coagulation disorder it also makes sense to treat the primary cause and not consider early embolization. When the causes are not easily treatable by surgery or medication (placenta increta), I agree that early embolization should be considered.

The phrase "In emergencies, patients are given uncrossed O-negative packed cells. It should be remembered that the blood group is usually known since it is entered in the patient's maternity record card" should not be understood to mean that the guidelines need not be adhered to in case of a blood transfusion. Looking at the maternity record card can, however, be helpful as, in addition to the patient's blood group, the antibody test is routinely recoded.

We are not advocating uncritical use of recombinant activated factor VIIa (rFVIIa). In our experience, the application of rFVIIa should be considered as the measure of last resort—even though promising results have been reported in the literature. DOI: 10.3238/arztebl.2009.0114 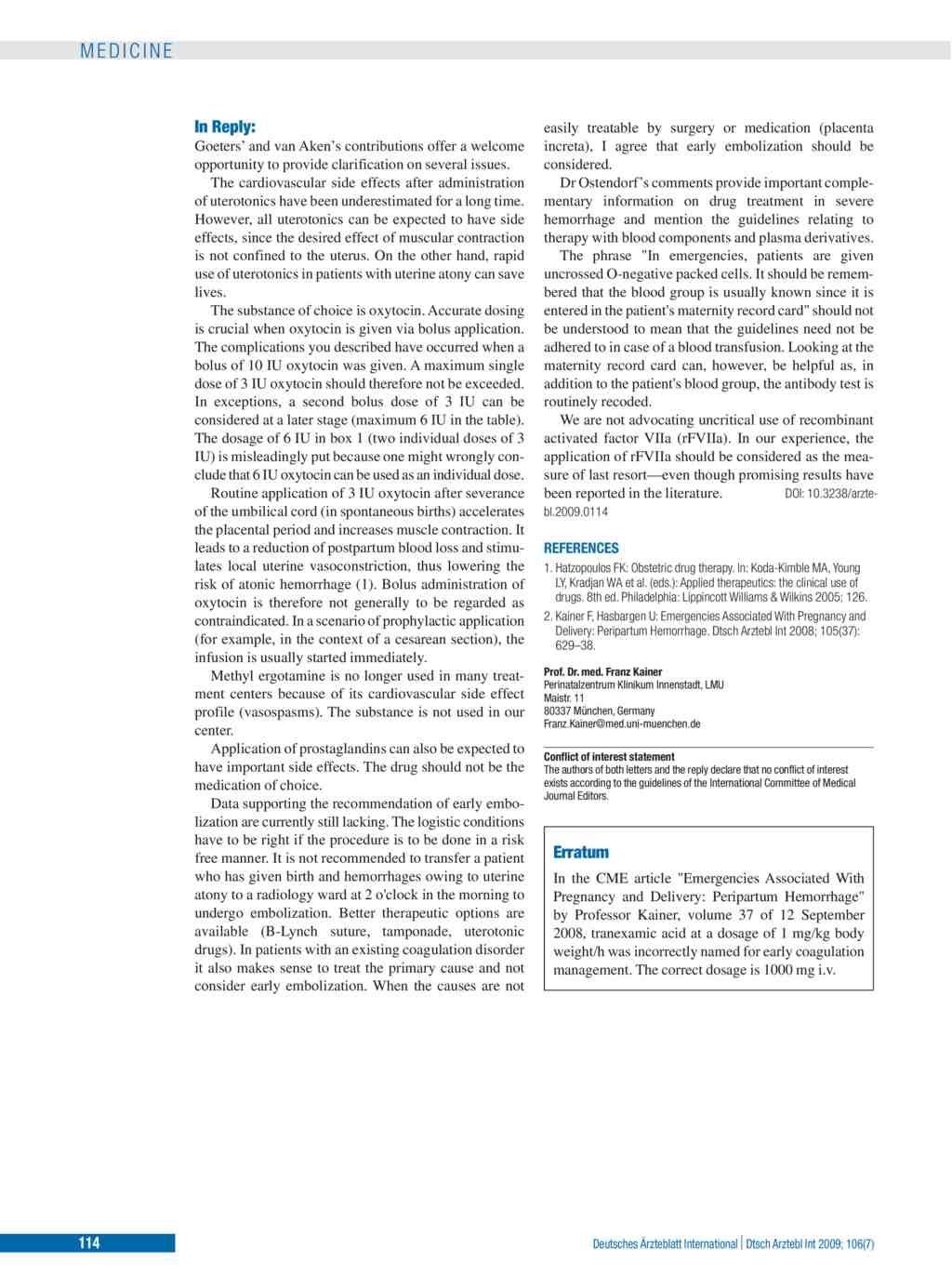