Non-invasive brain stimulation techniques such as transcranial direct current or transcranial magnetic stimulation (TMS) have become increasingly important in recent years for the diagnosis and treatment of neuropsychiatric diseases. These techniques are used to stimulate cortical neuronal assemblies.

TMS employs high-intensity (ca. 1 Tesla) pulsed magnetic fields in order to transfer electricity painlessly through the intact skull, in a different manner than is otherwise achievable with ultra-short current stimuli. It indirectly induces current flow in brain tissue, leading to the generation of neuronal action potentials. TMS can be applied repetitively (rTMS) to induce plastic increases in the activation or inhibition of circumscribed brain areas, which can last for hours after the termination of the stimulus.

Transcranial direct current stimulation (tDCS) with weak currents in the range of 1mA became a well-established technique in human neuroplasticity research eight years ago, when its plasticity-promoting effects in the human brain were successfully quantified with the aid of TMS (figure 1 jpg ppt).

tACS enables external interference with the cortical oscillations that play a major role in the temporal linkage of different cortical areas, according to the so-called binding hypothesis. High-frequency tRNS generates activating cortical aftereffects, which, unlike those produced by anodal tDCS, are independent of the direction of current flow.

Clinical applications of these techniques were a major theme of the conference, which is held every five years with the participation of the most active researchers in the field around the world. The entire spectrum of transcranial stimulation was covered by approximately 90 oral presentations and 250 posters for an audience of 600 participants from 39 countries (www.tms08.uni-goettingen.de). The conference was supported by the German Research Foundation (Deutsche Forschungsgemeinschaft, DFG), the State of Lower Saxony, the German Federal Ministry of Education and Research (Bundesministerium für Bildung und Forschung, BMBF), the German Society for Clinical Neurophysiology (Deutsche Gesellschaft für klinische Neurophysiologie, DGKN), and the Movement Disorder Society (MDS).

The clinical application of transcranial stimulation originally focused on the treatment of patients with depression. A current overview of this topic was given (Padberg, Munich). Numerous early pilot studies yielded conflicting data on the effect of TMS. The largest multicenter trial performed to date involved 301 patients with depression who had not benefited from medical treatment and who underwent either four weeks of stimulation with 3000 TMS impulses per day as antidepressive monotherapy, or else placebo stimulation. It was found that real stimulation resulted in a remission rate approximately twice as high as that which followed placebo stimulation. This positive result led the United States Food and Drug Administration (FDA) to approve TMS in October 2008 for the treatment of patients with medically intractable depression. In contrast, another multicenter trial, which was supported by the German Research Foundation (DFG), addressed a somewhat different application, namely, the primary combination of TMS with antidepressant medication; no significant difference was found between real and placebo stimulation. The clinical relevance of the therapeutic effects that have been achieved is currently a matter of debate, and trials comparing TMS with other established treatments (e.g., antidepressants, lithium, and psychotherapy) are still largely lacking. Only in the case of electroconvulsive therapy (ECT) are there already a number of studies available, some of which show a stronger effect for TMS than for ECT, while others show no difference. Further multicenter studies of TMS for depression that are now in progress should make it possible to determine the role of TMS in the stepwise treatment of depression. Overall, TMS has been found to be well tolerated. It is already being considered as a form of antidepressive treatment in some patients for whom medical therapy has been ineffective, has led to intolerable side effects, or is contraindicated by other, comorbid diseases.

Another type of application of TMS in depression is so-called magnetoconvulsive therapy (MCT), a treatment analogous to electro-convulsive therapy (ECT), in which TMS at very high frequency and intensity is used in order to induce a generalized seizure that will have an antidepressant effect. Only small pilot studies of MCT are available at present, and no large, controlled trials have yet been performed. The current state of research is similar for tDCS in depression, on which preliminary results from a number of trials that are now in progress were presented at the Göttingen conference. There was intense discussion of further possibilities for optimizing this form of therapy with respect to the site, intensity, frequency, and intervals of stimulation, the type of pulse, the direction of current flow (Sommer, Göttingen), and the technique of grouped stimulation (the so-called theta burst stimulation technique), which appears to hold particular promise.

Other potential clinical applications for neuroplasticity-inducing stimulation techniques were studied in a small number of placebo-controlled Phase II trials, including the treatment of patients with chronic pain (Antal/Nitsche, Göttingen, BMBF Competence Network for Headache). When used to treat chronic pain, approximately two weeks of either rTMS or tDCS produces transient improvement (ca. 30% to 60% improvement on the Visual Analog Scale), similar to the improvement produced by invasive motor cortex stimulation (a neurosurgical technique that has been used to treat chronic pain for roughly 20 years). In addition to many talks by researchers from abroad, Germany was represented by studies on the use of transcranial stimulation to treat tinnitus (Langguth, Regensburg), in stroke and motor rehabilitation (Hummel, Hamburg), in schizophrenia (Falkai and Wobrock, Göttingen, with patients still being recruited till June 2009) and epilepsy (Rosenow, Marburg). The results of treating (focal) epilepsy with rTMS and tDCS are mixed; the best interpretation of the available data seems to be that focal stimulation directly over the (neocortical) epileptogenic area can lead to a transient reduction in seizure frequency that usually lasts for several weeks. One session was devoted to basic research in the field carried out on experimental animals. For example, tDCS was shown to be effective against epilepsy in a rat model (Liebetanz, Göttingen). Overall, the transcranial stimulation techniques are a form of therapy with few adverse effects. The main risk of rTMS is the very rare induction of epileptic seizures; with tDCS, there have been a few reported cases of a local, reversible skin rash due to faulty electrode contacts. In the next few years, major advances are expected in current flow modeling (figure 2 jpg ppt), in the combined use of transcranial stimulation and associated measuring techniques such as magnetic resonance spectroscopy and positron emission tomography, and in the possibility—which recently became reality—of categorizing activated brain areas more precisely with transcranial stimulation while functional magnetic imaging is being performed at the same time.

Conflict of interest statement
The author reports that he has received support for projects involving transcranial magnetic and direct current stimulation from the German Research Foundation (Deutsche Forschungsgemeinschaft, DFG), the German Federal Ministry of Education and Research (Bundesministerium für Bildung und Forschung, BMBF), the European Union, the Volkswagen Foundation, the Rose Foundation, and that he has served as an advisor for several companies working on the development of stimulating apparatus of these types. 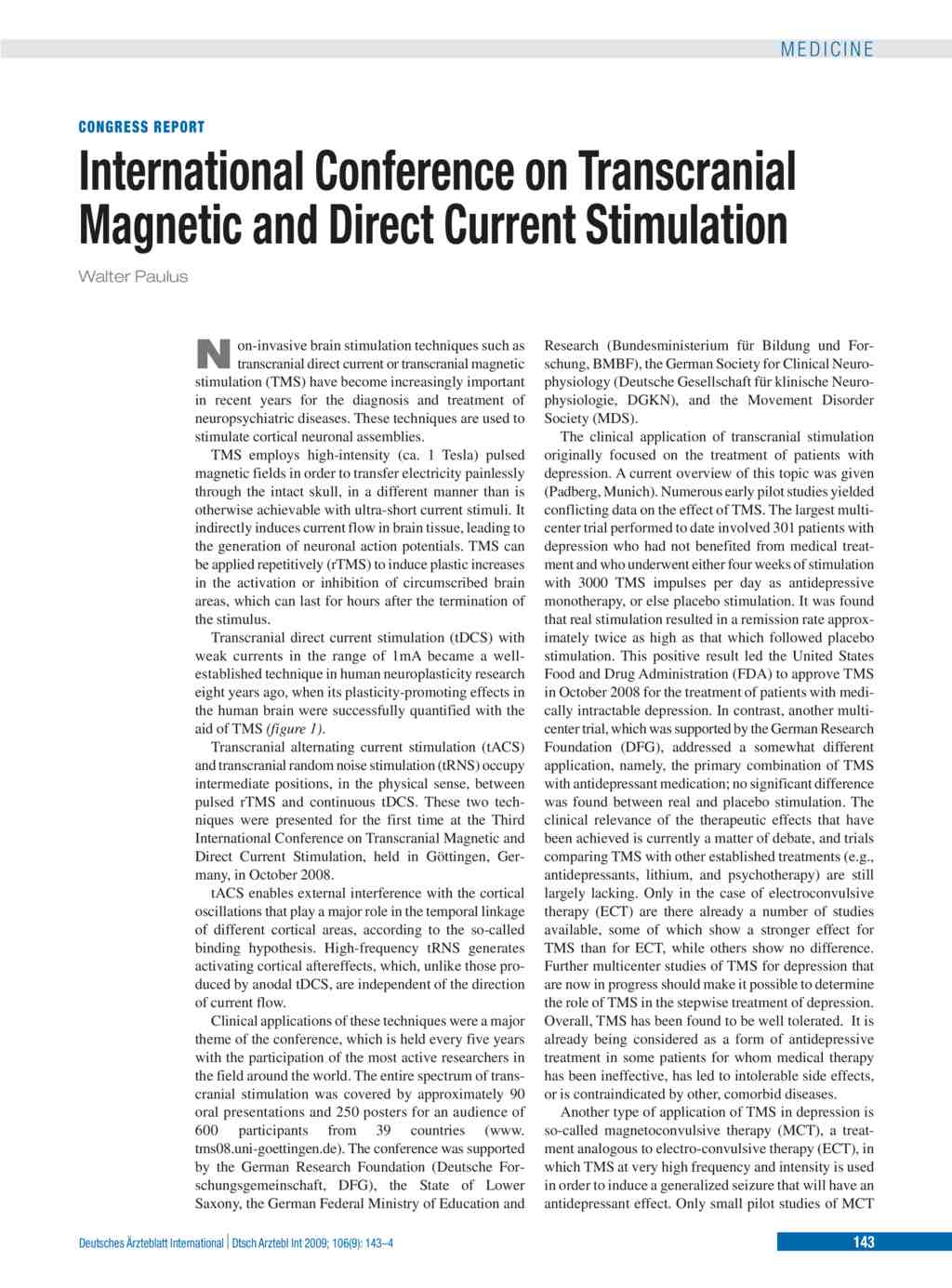