Rheumatoid arthritis (RA) is a chronic systemic autoimmune disease and is the most frequent form of inflammatory joint disease. The prevalence is between 0.5% and 1%; women are affected about three times more often than men. The prevalence increases to about 2% in the fourth and fifth decades of life. RA is characterized by symmetrical, eroding joint synovitis. The systemic character of the disease is evident in the participation of other organs, including the heart and lung. In most patients, signs of destructive arthritis can even be recognized in the first year of the disease by using modern imaging procedures, such as magnetic resonance imaging and joint sonography). The disease is accompanied by chronic pain and extended periods off work. Moreover, the increasing handicap leads to failure in joint function and to inability to work. The various systemic manifestations and the increased cardiovascular risk decrease life expectancy (1).

Since the switch in paradigm—from retarding the start of therapy to early aggressive therapy—and since the introduction of biologicals, the development of the disease can now be effectively delayed or sometimes even be halted. Numerous studies, such as the treatment strategy studies [Behandlungs-Strategie-Studien; BeSt], have shown that if the treatment is started early and continuously adapted to the activity of the disease, this can greatly enhance the chance of success. The initial use of immunosuppressive combination therapies can increase the rate of clinical remissions and more effectively inhibit or prevent progressive joint destruction in many patients. In the BeSt study, the combination MTX + the anti-TNF-alpha antibody infliximab was superior to the combination therapy of conventional immunosuppressives (MTX + sulfasalazine + prednisone), with respect to remission rate (28% versus 40% after one year) and attaining a therapy-free remission phase (2). Another very recently published study (COMET study) has confirmed that combination therapy with MTX + the recombinant TNF-alpha receptor/IgG1 fusion protein etanercept is accompanied by a higher remission rate (50% versus 28% after one year) than with MTX monotherapy, if this is initiated in the early stages of RA ("early RA", ERA; three to 24 months after the onset of the disease). At the same time, no radiological evidence for joint destruction was found and it was demonstrated that joint function and working ability were maintained (3). In this context, it is particularly important to identify new diagnostic markers which might permit diagnosis of RA as soon as possible. In future, it should be possible to use these markers to improve the predictability of response or failure to conventional monotherapy or combination therapy with immunosuppressives and to facilitate the recognition of the primary necessity of combination therapy with biologicals for patients with more aggressive disease. This sort of risk stratification with prognostic markers would presumably increase the rate of successful therapy, as well as avoiding the risk of overtreating patients with less aggressive disease. In the ideal case, this risk stratification would allow the expected side effects—such as the increased susceptibility to infection under immunosuppressive therapy—to be included in the selection of therapy. The diagnosis and increasingly complex risk stratification necessitate considerable medical effort and could be carried out in specialized early arthritis outpatient clinics. This edition of the Deutsches Ärzteblatt International provides an ex-ceptional insight into the value of the measurement of the serum levels of anticitrullinated protein/peptide antibodies (ACPA) in the diagnosis of RA (4).

ACPA are highly sensitive and specific serum markers of RA. In particular, the specificity of ACPA (>95%, depending on the method) is much better than that of the rheumatoid factor. Controlled studies have shown that ACPA is a good predictor of rapidly progressive joint destruction by erosive arthritis. Thus the relative risk (RR) with negative ACPA or with low titers is 2.6, but 9.9 with high ACPA (5). In particular, these measurements can be used in early arthritis outpatient clinics to distinguish between erosive and nonerosive clinical forms of as yet undifferentiated arthritis and to separate early stage RA (ERA) in differential diagnosis from other similar clinical pictures. About 60% of RA patients are ACPA positive. The clinical course and joint destruction are more severe in ACPA-positive than in ACPA-negative RA patients (6). Twin studies have shown that the genetic contribution to RA pathogenesis is about 60%. Specific alleles of the HLA-DRB1 locus ("shared epitopes") are associated with a more aggressive clinical course of the RA. In contrast, other HLA-DRB1 alleles seem to be more protective. The described association between HLA-DRB1 "shared epitopes" and RA risk only holds for ACPA-positive patients, but not for ACPA-negative patients. The protective alleles (DRB1*03) are accompanied by ACPA-negative RA (7, 8). Polymorphisms of the PTPN22 gene, which codes for a protein which interferes with lymphocyte tyrosine kinases, as well as genetic variants of tumor necrosis factor receptor-associated factor 1 (TRAF-1) and complement component 5 (C5) are also associated with ACPA-positive RA (9). Interestingly, the exogenous risk factor of smoking is associated with the ACPA-positive RA variant. The increased proportion of cells with citrullinated proteins in the bronchoalveolar lavage taken from smokers may possibly be of pathogenetic significance. Feasible approaches towards future risk stratification of RA patients using ACPA serum status and genetic markers are becoming clear.

The first members of the ACPA auto-antibody family were originally detected by immunofluorescence techniques. They were described as antiperinuclear factor (APF) and antikeratin antibody (AKA) and linked to more aggressive forms of RA. It was subsequently shown that these auto-antibodies recognize citrullinated epitopes of filaggrin. Citrullination is a posttranslational modification of a protein such as filaggrin, in which the aminoacid arginine is converted to citrulline by deamination. This process occurs physiologically during apoptosis, keratinization, and during inflammatory processes. Citrullinated proteins are found in the tunica synovialis during RA. The citrullinated epitope is the target structure for filaggrin antibodies or for ACPA, which can be found both in circulating immune complexes and in synovial fluid in RA (10). Antibodies to citrullinated vimentin are referred to as anti-Sa, after the index patient Savoie (11). The Sa antigen is the starting point for the anti-MCV (antimutated citrullinated vimentin) ELISA, which was developed some years ago. The newly developed anti-MCV assay is of similar diagnostic importance to the so-called anti-CCP2 ELISA of the next generation. Nevertheless, the anti-MCV assay extends the diagnostic spectrum. Anti-MCV-positive, anti-CCP-negative RA patients have a more aggressive RA than patients who are anti-MCV-negative and anti-CCP-negative. For patients with early RA, anti-MCV-antibodies have the same specificity as anti-CCP-antibodies, but are more sensitive (71% versus 58%). Anti-MCV antibodies are evidently a better prognostic marker than anti-CCP antibodies for early RA with a clinical course leading to joint destruction (12). If ACPA is detectable in other inflammatory rheumatic diseases—such as systemic lupus erythematosus or psoriatic arthritis—an erosive clinical course can be expected in these patients too. As with rheumatoid factor analysis, there are false positive results with tuberculosis or chronic viral hepatitis.

Conflict of interest statement
Wolfgang L. Gross reports that he has links to Roche, Novartis, Actelion, Sanofi-Aventis, Euroimmun AG, Binding Site, Biorad, Phadia, Aescudiagnostik, Genericassay Orgentec, Bristol-Myer Squibb, GlaxoSmithKline, and Wyeth. The other authors declare that there is no conflict of interest in the sense of the International Committee of Medical Journal Editors. 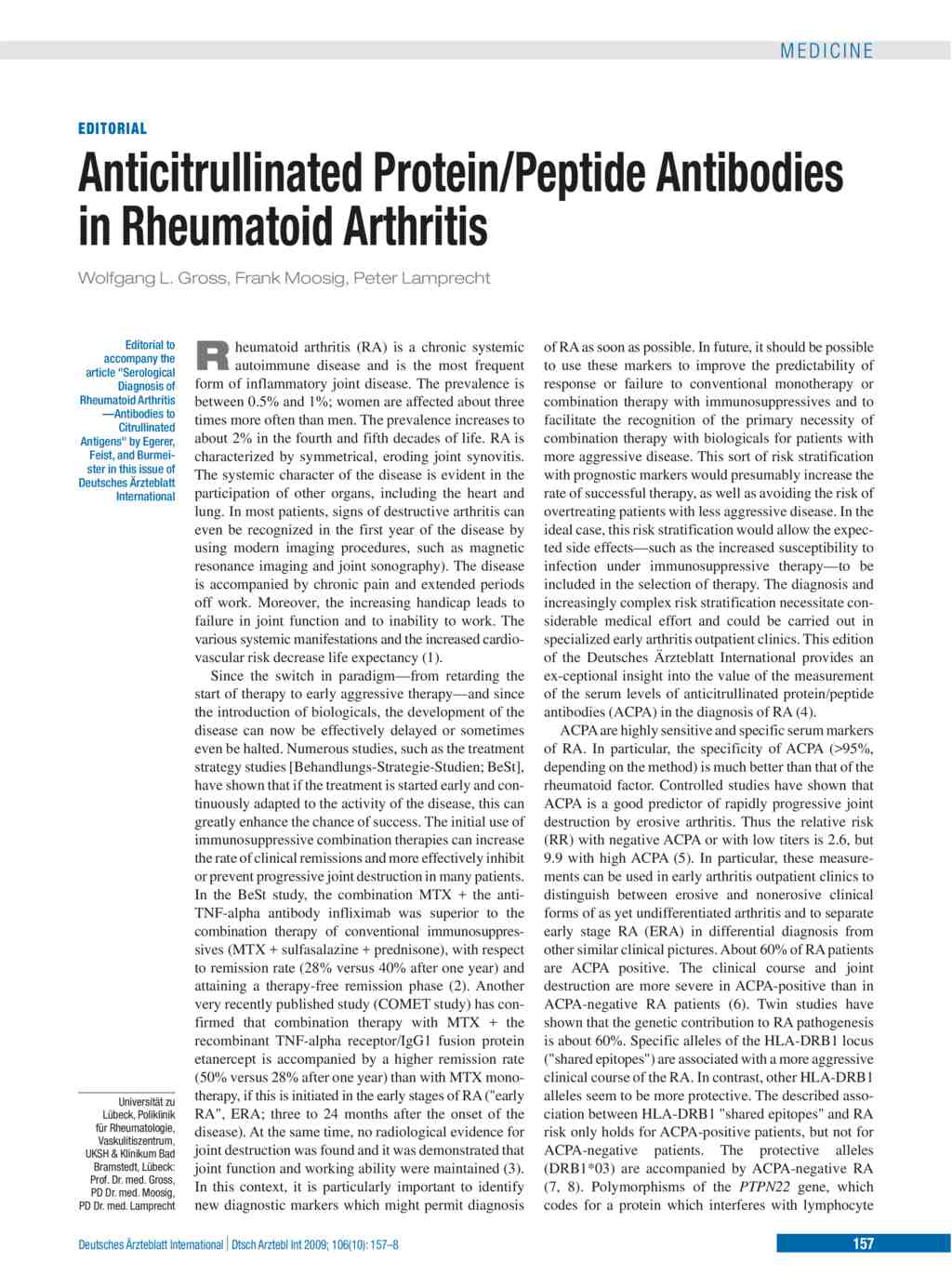