Background: Obstructive sleep apnea (OSA) is more common in patients with atrial fibrillation (AFib). Recently, an additional association between central sleep apnea/Cheyne-Stokes respiration (CSA/CSR) and AFib has been described. The aim of this study was to investigate the prevalence and type of sleep disordered breathing in patients with AFib and normal systolic left ventricular function.
Methods: 150 patients (110 men and 40 women, aged 66.1 ± 1.7 years) underwent cardiorespiratory polygraphy, capillary blood gas analysis, measurement of NT-proBNP, and echocardiography to determine the diameter of the left atrium (LAD) and the peak systolic pulmonary artery pressure (PAP).
Results: Sleep disordered breathing was documented in 74% of all patients with AFib (43% had OSA and 31% had CSA/CSR). Patients with CSA/CSR had a higher PAP, a higher apnea-hypopnea index, a greater LAD, and a lower capillary blood pCO2 than patients with OSA.
Conclusions: Patients with AFib were found to have not only a high prevalence of obstructive sleep apnea, as has been described previously, but also a high prevalence of CSA/CSR. It remains unknown whether CSA/CSR is more common in AFib because of diastolic dysfunction or whether phenomena associated with CSA/CSR predispose to Afib. Further research on this question is needed.
Dtsch Arztebl Int 2009; 106(10): 164–70
DOI: 10.3238/arztebl.2009.0164

The term "sleep-disordered breathing" embraces a heterogeneous group of pathophysiological mechanisms. By definition, these disorders cause an interruption of breathing for at least 10 seconds (apnea) or a significant reduction in respiration with accompanying oxygen desaturation or waking reactions (hypopnea) (1).

The most frequent type of sleep-disordered breathing is obstructive sleep apnea (OSA). In OSA, obstruction of the upper respiratory tract during the night causes a suspension of breathing and consequently hypoxemia. The prevalence of OSA in the general population is 1% to 2% (2). OSA is known to be associated with increased cardiovascular mortality and morbidity (3). There is now also a consensus that OSA is an independent risk factor for the development of arterial hypertension (4), which in turn is thought to be a major risk factor for the occurrence of atrial fibrillation (AFib) (5). This alone makes a raised prevalence of OSA in patients with AFib plausible (6).

The aim of the present investigation was to evaluate the prevalence of sleep-disordered breathing in AFib, paying particular attention to the various types of disorder; the characteristics of the different groups were compared. To avoid bias, patients with restricted systolic left ventricular function were excluded.

Methods
Patients
Between January 2006 and December 2007, 150 patients with normal left ventricular function and documented persistent AFib were examined for the presence of sleep-disordered breathing. All of these patients had displayed AFib on a resting electrocardiogram (ECG) at the time of admission to a cardiology ward. No account was taken of their previous history, the reason for referral, or the management planned.

The patients were primarily enrolled in the study by the cardiologists treating them, not by the members of the study team, who also worked in the same hospital. Since this was an observational study and cardiorespiratory polygraphy is an approved diagnostic procedure, the permission of the local ethics committee was not sought. Each patient was informed at the time of admission about what the investigations would involve, their purpose, and the potential risks. All patients gave their informed consent. No other admission criteria were defined.

The exclusion criteria were:

Cardiorespiratory polygraphy
Sleep-disordered breathing was evaluated by means of cardiorespiratory polygraphy. Following detailed discussion of the procedure, a recording device was attached to the patient's body in the evening. This apparatus continuously collected data on nasal airflow, thoracic and abdominal excursion, the patient’s body position, snoring events, and, noninvasively via pulse oximetry, oxygen saturation. As previously described (10), the data were first analyzed automatically, then manually by an experienced medical technician, and finally by a doctor skilled in sleep medicine.

A sleep-related breathing disorder was defined by the presence of an apnea-hypopnea index (AHI; total apnea and hypopnea events per hour) greater than 5. Patients in whom more than 50% of the sleep-disordered breathing was CSA were assigned to the CSA/CSR group, those with over 50% OSA to the OSA group. If a patient displayed a rate of divergent apneas and/or hypopneas exceeding 10%, this was recorded. The sleep-disordered breathing was classified as mild if the AHI was between 5/h and 14/h, moderate between 15/h and 29/h, and severe from 30/h upward.

- assess the systolic left ventricular function in apical four- and two-chamber views by the biplanar slice summation method (modified Simpson method);
- estimate the peak systolic pulmonary artery pressure (PAP) by means of a simplified Bernoulli formula;
- determine the anteroposterior diameter of the left atrium in relation to the body surface area (LAD) in M-mode with plausibility control in apical four- and two-chamber views.

The body surface area was calculated with the aid of the Mosteller formula.

NT-proBNP
N-terminal pro-brain natriuretic peptide (NT-proBNP) was used as an additional marker to assess atrial volume. The samples were analyzed with the aid of the Elecsys 2010 system.

Statistics
WinSTAT was used for statistical analysis. Differences between groups were detected by means of ANOVA.

Results
Patients
A total of 254 patients were screened for enrollment in the study, of whom 150 fulfilled the inclusion criteria and displayed none of the exclusion criteria. This group comprised

By definition the authors included 107 patients with persistent AFib, 27 with permanent AFib, and 16 with previously described paroxysmal AFib that had been persistent for more than 48 hours at the time of admission. The reasons for hospitalization were:

The group of patients with CSA/CSR had a higher AHI than those with OSA. The minimum oxygen saturation tended to be lower and the mean desaturation higher in the OSA group than in the CSA/CSR group. The same was true for the longest apnea phases: the difference between OSA and CSA/CSR was not significant, but the apnea phases tended to be longer in the OSA patients. The patients with OSA had longer hypopnea phases than those with CSA/CSR.

NT-proBNP
The NT-proBNP data are shown in table 1. There were no differences among the various groups, although the NT-proBNP values in the CSA/CSR group tended to be higher than those in the other groups.

Discussion
In addition to the known higher incidence of OSA (42.7% in this study), the data presented here show for the first time an increased prevalence of CSA/CSR (31.3%) in patients with AFib and normal global systolic left ventricular function. Both groups of patients with sleep-disordered breathing displayed an increased LAD, and patients with CSA/CSR showed higher PAP, higher AHI, and lower pCO2 than patients with OSA.

A study published in 2004 reported a 49% prevalence of OSA in 152 patients with AFib before cardioversion (6). That investigation had one conspicuous limitation, however, viz. the diagnosis of OSA was made by means of a validated questionnaire (positive predictive value 89%). Nevertheless, we found a similar prevalence of OSA in the present study. The prevalence was much higher in a study published recently, in which OSA was demonstrated by polysomnography in 84% of 52 patients with chronic AFib (11). In contrast, Porthan et al. found sleep-disordered breathing in only 32% of patients with lone AFib, a rate which, moreover, did not differ from that in a control group matched for age, sex, and cardiovascular morbidity (12). Besides the primary cardiac diseases and a lower cut-off value for AHI (5 events per hour in our own study, 10/h in the study by Porthan et al., the much higher rates found in the present study group may be related to the higher age and the higher body mass index of the patients.

Leung et al. described an association between AFib and CSA. In a group of 60 patients with CSA, they found that 27% had AFib (9). Such an association is well known for systolic cardiac insufficiency (7, 8). The etiology of the cardiac insufficiency has also been reported to influence the prevalence (13). The underlying mechanism consists in augmented pulmonary venous congestion, leading to an increase in interstitial pressure (14, 15). This causes increased stimulation of vagal mechanoreceptors of the lungs (the so-called J receptors), which in turn impart higher sensitivity of the chemoreceptors to CO2 and thus lead to respiratory instability (16).

Such an increase in pulmonary capillary pressure is also possible in patients with purely diastolic dysfunction. One predisposing factor is AFib, which is often an expression of increased left atrial pressure and/or volume. The present study found more frequent occurrence of CSA/CSR in patients with AFib. Another sign of the pathophysiological interrelationships described is a correlation between AHI and PAP, particularly in the CSA/CSR group. The patients in this group also displayed significantly lower pCO2, an expression of sensitivity of the chemoreceptors to CO2, analogous to CSA/CSR patients with cardiac insufficiency (7, 8, 13).

It was shown as early as 2003 that OSA has an influence on recurrence of AFib after cardioversion (17). Kanagala et al. described recurrence in 82% of 27 patients with untreated OSA, compared with rates of 42% in 12 treated patients and 53% in the control group (n = 79). It should be mentioned, however, that the control group was recruited from patients who had not undergone any sleep medicine investigation.

Recently it was reported that even after ablation, OSA is an independent factor for the recurrence of AFib (18). Moreover, Gami et al. retrospectively showed in 3542 patients that OSA increased the risk of a first episode of AFib in individuals under 65 years of age (19).

It has long been known that hypoxia as a consequence of sleep-disordered breathing and particularly OSA can result in arrhythmias (20). Increased sympathetic activation also predisposes to AFib (21). Inefficient respiratory excursions, a regular occurrence in the apnea phases of OSA, alter the transmural pressure and volume relations and in this way trigger atrial, extension-sensitive ion channels (22).

Similar mechanisms can be assumed for CSA/CSR. However, it has been shown that arrhythmias occur in the hyperventilation phases of CSR (23). This seems to be caused by, among other factors, sympathicotonia resulting from increased coactivity of the autonomic cardiovascular and respiratory nervous system (24). Furthermore, distension-related alterations of pressure and volume relations generally result from the massive respiratory excursions in the hyperventilation phases, in contrast to the apnea phases (22).

The cited studies on continuous positive airway pressure (CPAP) in OSA point to another potential approach to the treatment or the primary or secondary prophylaxis of AFib. Randomized and placebo-controlled studies have yet to be carried out. The role of a specific form of ventilation treatment for CSA/CSR in this context remains to be established and warrants further investigation. However, prevention of hyperventilation phases seems to be a sine qua non for effective management.

Potential limitations
The patients investigated in this study were being treated at a tertiary center. The prevalence among outpatients or in primary or secondary centers may be different. In addition, to avoid bias patients with cardiac insufficiency were excluded. However, 22.4% of the patients with paroxysmal AFib, 31.4% of those with persistent AFib, and 48.9% of those with permanent AFib have cardiac insufficiency (25), so the findings cannot necessarily be extrapolated to AFib patients as a whole.

The patients were examined by cardiorespiratory polygraphy, which, unlike polysomnography, does not permit analysis of sleep architecture. Thus the AHI may be estimated too low, because the recording times may be longer than the sleeping times.

A further limitation lies in the overlapping of the obstructive and central forms of sleep apnea. The patients were allocated to the CSA/CSR group or the OSA group depending on which type of event predominated. The noninvasive method of measuring PAP differed from the gold standard—invasive measurement—and should thus be seen as a potential limitation, albeit one with little clinical impact.

Conclusions
We have demonstrated an increased frequency of sleep-disordered breathing in patients with AFib. As well as the known higher prevalence of OSA, which is of clinical relevance in the primary and secondary prevention of AFib (both after cardioversion and after ablation) (17–19), we have shown for the first time a high proportion of patients with CSA/CSR, which can be attributed to raised pulmonary capillary pressure resulting from the diastolic dysfunction caused by AFib. Although no studies on CSA/CSR with regard to primary and secondary prevention have been carried out, it can be surmised that this form of sleep-disordered breathing is also of clinical relevance. Therefore, routine screening appears advisable for these patients. 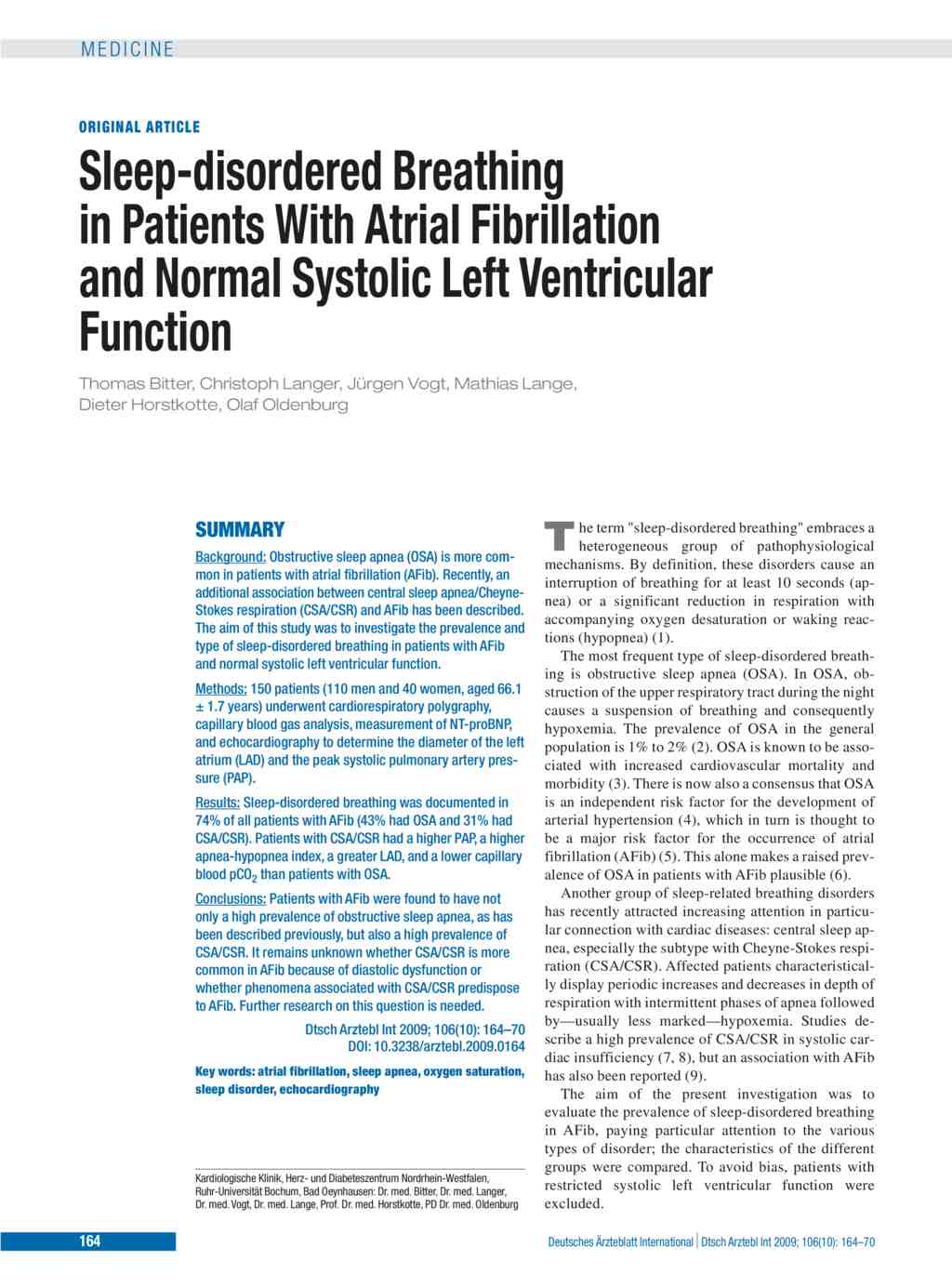