Management of Patients With Aortic Dissection: In reply

Our article does not claim to be an all inclusive, comprehensive textbook chapter that includes all aspects of aortic dissections. Its objective was to provide the wide readership of the Deutsches Ärzteblatt with an overview, especially of the treatment of aortic dissection. We thank our correspondents for their comments and additions to our article. Our comments follow.

Etiology of aortic dissection—In mucoid media degeneration, excess mucopolysaccharides occur in the connective tissue of the aortic wall (in histopathological specimens after aortic surgery). This histopathological finding applies to Marfan syndrome (MFS), for example, but does not confirm the diagnosis.

Incidence of vascular Ehlers-Danlos syndrome (EDS)—1:10 000–25 000 people develop EDS. According to the Villefranche classification, six clinical types of EDS can be distinguished. The classic type of EDS is the most common form. Vascular type IV EDS affects 5–10% of patients (1).

Loeys-Dietz syndrome (LDS)—LDS is a rare etiology of aortic dissection with phenotypical overlaps with the vascular type of EDS (2). After mutation, a complex pathology develops which is mainly accompanied by aortic aneurysms at risk of rupturing. If patients with LDS are not operated on prophylactically by a vascular surgeon, they tend to die early (average age 26 years) from vascular complications (2).

Surgical therapeutic option “frozen elephant trunk”—In expert circles, combined therapy (open surgery in the area of the ascending aorta and arch, and endovascular surgery by stent graft in the region of the descending aorta) is being discussed as a one-time procedure, which is already being conducted in some specialized centers. Which stent graft prosthesis should be used and whether only a certain hybrid stent (stent graft with integrated vascular Dacron prosthesis) should be used is not clear at this time. Since the procedure is in its clinical testing stages and long term results are not yet available, we decided not to include this therapeutic option in our article.

Medical long term therapy—Treatment with beta blockers has for many years been the standard long term treatment of patients after aortic dissection and patients with Marfan syndrome. Animal model have shown a positive effect of angiotensin II receptor blockers (losartan) in inhibiting the growth of aortic aneurysms (3). This effect was also seen in 18 children with MFS in a non-randomized observational study (4). A general therapeutic recommendation for patients after aortic dissection or patients with MFS cannot be concluded from this study situation. A prospective randomized study, which compares losartan with atenolol in MFS patients, has been running for about a year. After this study has been evaluated it may be possible to deduce a new therapeutic recommendation for patients with Marfan syndrome. DOI: 10.3238/arztebl.2009.0172 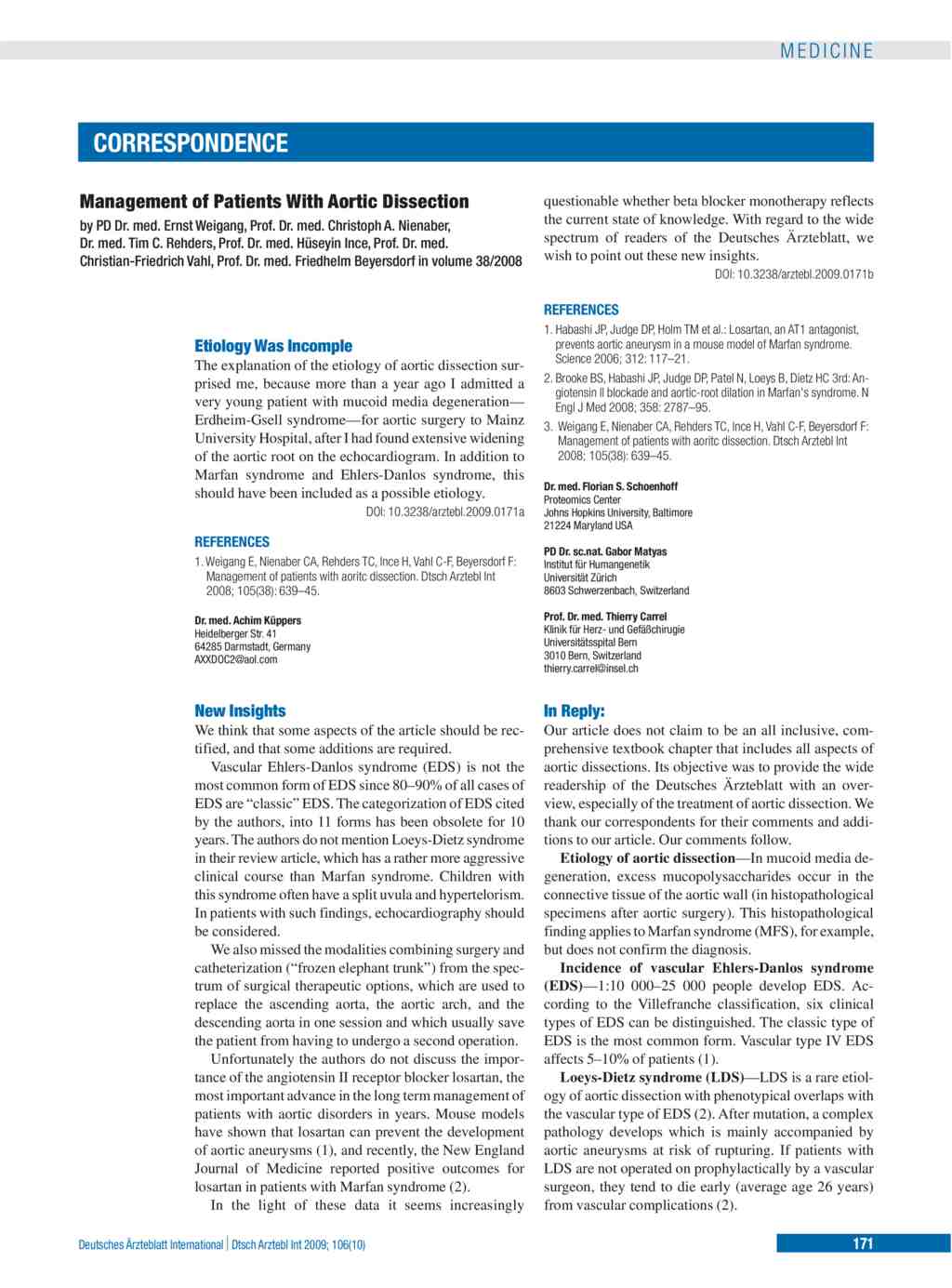