Tonsillectomy in Children: In reply

The terms tonsillectomy and tonsillotomy and the relevant indications for either of these are not precisely distinguished from each other. However, such a distinction is not really possible. Tonsillectomy seems clearly defined as the complete removal of the tonsil, but tonsillotomy cannot be clearly defined in the same way. The term encompasses different partial resections of the tonsil, ranging from a very slight resection to total removal. Further, additional terminology has developed that is even less clearly defined or not at all ("intracapsular", "subtotal", or partial tonsillectomy). Partial resection of the tonsils in children has several advantages, and the reservations mentioned often have a historical basis. Many institutions undertake only partial resections in children (in the sense of a subtotal tonsillectomy), if previous inflammations of the tonsils were mentioned in the patient's medical history. This means that not only the terms themselves are not clearly distinguishable from each other, but the same is true for the indications. The terminology also has particular consequences in terms of how services are accounted for. Owing to the difficulties explained, we decided not to distinguish the terms because this did not seem necessary for the core statements of our article. Dr Reiß rightly complains that box 2 did not provide a satisfactory rating of the listed complications was done in box 2. We tried in the text box to list all known or reported complications. Apart from postoperative hemorrhage, all listed complications are rare, and some of them are real rarities. It would have been more useful to define these extremely rare or unusual complications (emphysema, pneumomediastinum or -thorax, necrotizing fasciities, meningitis, damage to the recurrent laryngeal nerve) accordingly.
DOI: 10.3238/arztebl.2009.0192b

Conflict of interest statement
The authors of the letter and of the reply declare that no conflict of interest exists according to the guidelines of the International Committee of Medical Journal Editors.
1.
Stuck BA, Windfuhr JP, Genzwürker H et al.: Tonsillectomy in children. [Die Tonsillektomie im Kindesalter.] Dtsch Arztebl Int 2008; 105(49): 852–61
Tonsillectomy in Children: In reply 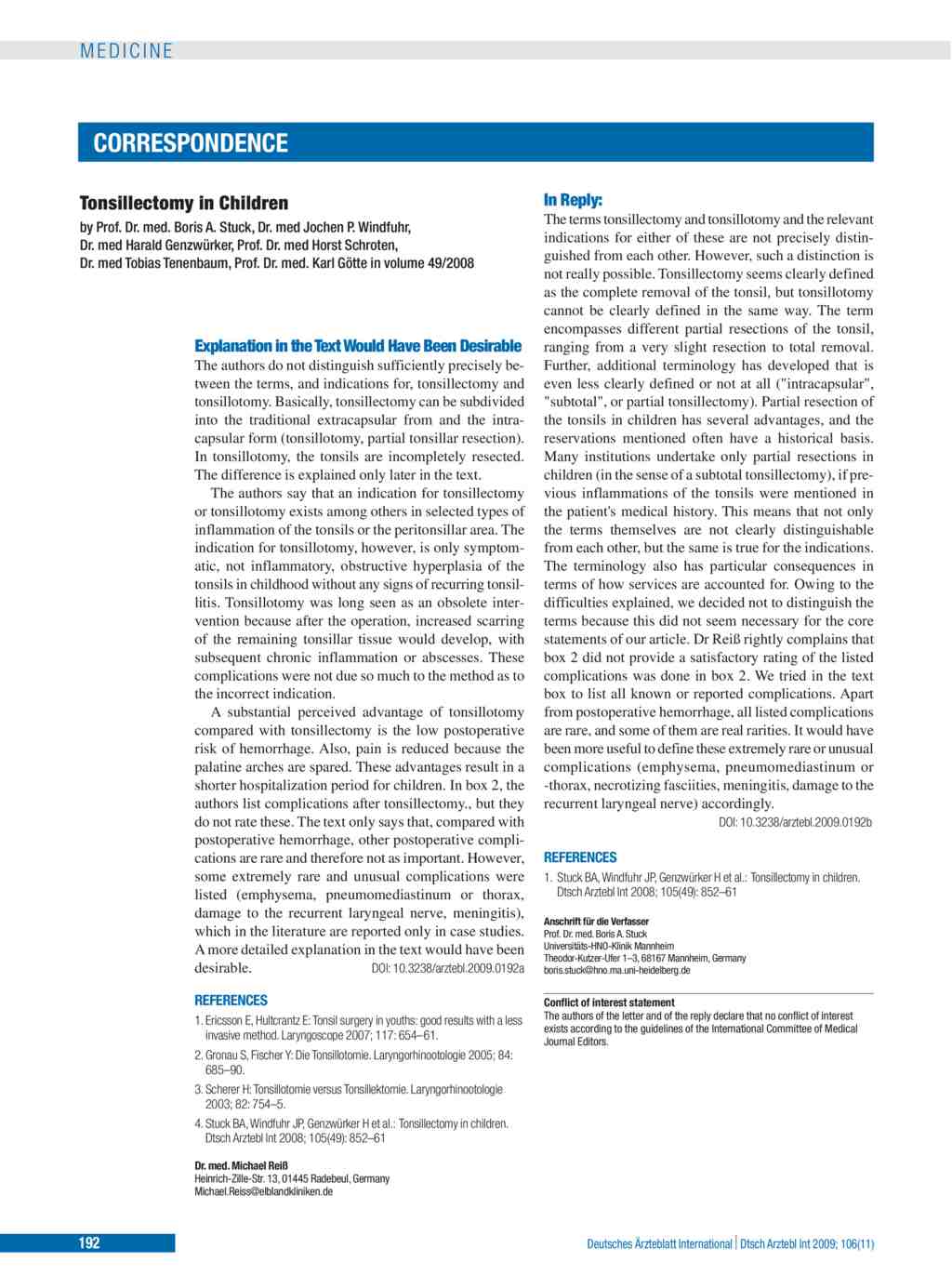