Compared with other countries, Germany provides a very comprehensive screening program for colorectal cancer (CRC) for the population ensured with the statutory health insurers. The following measures are included:

- Medical advice on available preventive measures to avoid colorectal cancer (2.8 million advisory sessions in 2007)
- Fecal occult blood testing (FOBT), annually for persons aged 50 and older and every second year for those aged 55 and older (4.5 million examinations in 2007)
- As an alternative to FOBT: early detection colonoscopy over the age of 55, with the earliest repetition after 10 years (3.2 million people since it was introduced in 2002).

On this background, the article by Schoppmeyer et al. is important, because it analyzes detailed data from 212 patients from 4 academic teaching hospitals and a university hospital in the Leipzig region, in whom colorectal cancer was diagnosed between November 2004 and December 2005. The authors present a careful retrospective analysis of the patients' screening histories over the preceding 10 years, based on interviews with the patients and their primary care physicians, after their cancer was diagnosed.

Methodologically, this is a case series that inevitably is subject to recall bias because the interview data were collected retrospectively. The retrospective reconstruction of diagnostic procedures that were performed or omitted after a diagnosis of malignancy has been made may selectively influence subjective memories (for example, of the screening history) or the allocation of responsibility or blame.

- Patients with colorectal carcinomas who had never participated in any screening measures. This group comprises 105 of the 212 patients. More than 66% reported not to have been aware that a screening examination was available, free of charge. 14% thought they were too young or did not attend any screening tests for fear of the examinations themselves or the detection of malignancies (11%) or for reasons of their own negligence (9%). Thus, persons who are reluctant to participate in screening programs and whose reticence vis-à-vis prevention programs cannot be explained by information deficits or psychological barriers consitute merely a small group of patients (n = 9). Since we know that for the regular demand for fecal occult blood (FOB) testing, sex specific factors play an important role, readers might have wished for more information on the social composition of this group of patients (1).
- Patients with colorectal carcinomas who had had at least one FOBT within the 10 years before their diagnosis. This patient group included 100 cancer patients. The fact that in 93 of these patients, the FOBT was reported to have yielded a negative result each time is not surprising, considering the limited sensitivity with regard to carcinomas (40% to 50%) and the sensitivity of 15% to 25% with regard to advanced adenomas of the guaiac-based test that is the preferred test for CRC screening in Germany. On this basis, it is reasonable to demand that immunological tests should be used for screening, which, with regard to their test attributes, often seem to be superior to the guaiac-based FOBT (2), if rather more costly.
- Patients who had undergone an earlier colonoscopy within 10 years (!) before their cancer diagnosis. This group comprises only 25 of the 212 patients. In 4 cases, a positive FOBT preceded the colonoscopy, so that this was not actually a screening intervention but diagnostic colonoscopy. Seven patients who had undergone colonoscopy had never undergone FOB testing. More than half of colonoscopy patients (n = 13), underwent polypectomy. However, 5 of the 13 patients did not follow the recommendation to present again within a certain time period. The occurrence of so-called interval cancers in spite of colonoscopy can be explained with biological factors (for example, rapid tumor growth in case of microsatellite instability), location related factors (proximal colon), and investigation related factors (equipment, lacking experience on the part of the investigator), as well as with insufficient bowel lavage or deficiencies in the polypectomy procedure (3). Which factors were individually present remains the subject of speculation in the Leipzig case series.

As a matter of fact, only about 1 in 2 CRC patients had undergone any form of screening for CRC in the 10 years preceding their diagnosis. Often the failure was unawareness of the prevention services on offer. The media information campaigns on early detection options for colorectal cancer, which were excellently supported by different foundations (Felix Burda Foundation, Lebensblicke, and others) and not-for-profit organizations (for example, German Cancer Aid) were not timely enough not reach these patients in Leipzig.

However, this study does not contradict the general message that colorectal cancers can be detected at an early stage and mortality due to CRC can be reduced to a greater extent than in other types of cancer, thanks to early detection screening. The standardized death rates for colorectal cancers have fallen substantially in men and women in Germany over the past 10 years (Federal Statistical Office 2009), for colon cancer, the reduction was 25%. Undoubtedly this is due not exclusively, but certainly partly, to successful early detection measures.
Dtsch Arztebl Int 2009; 106(12): 193–4
D0I: 10.3238/arztebl.2009.0193 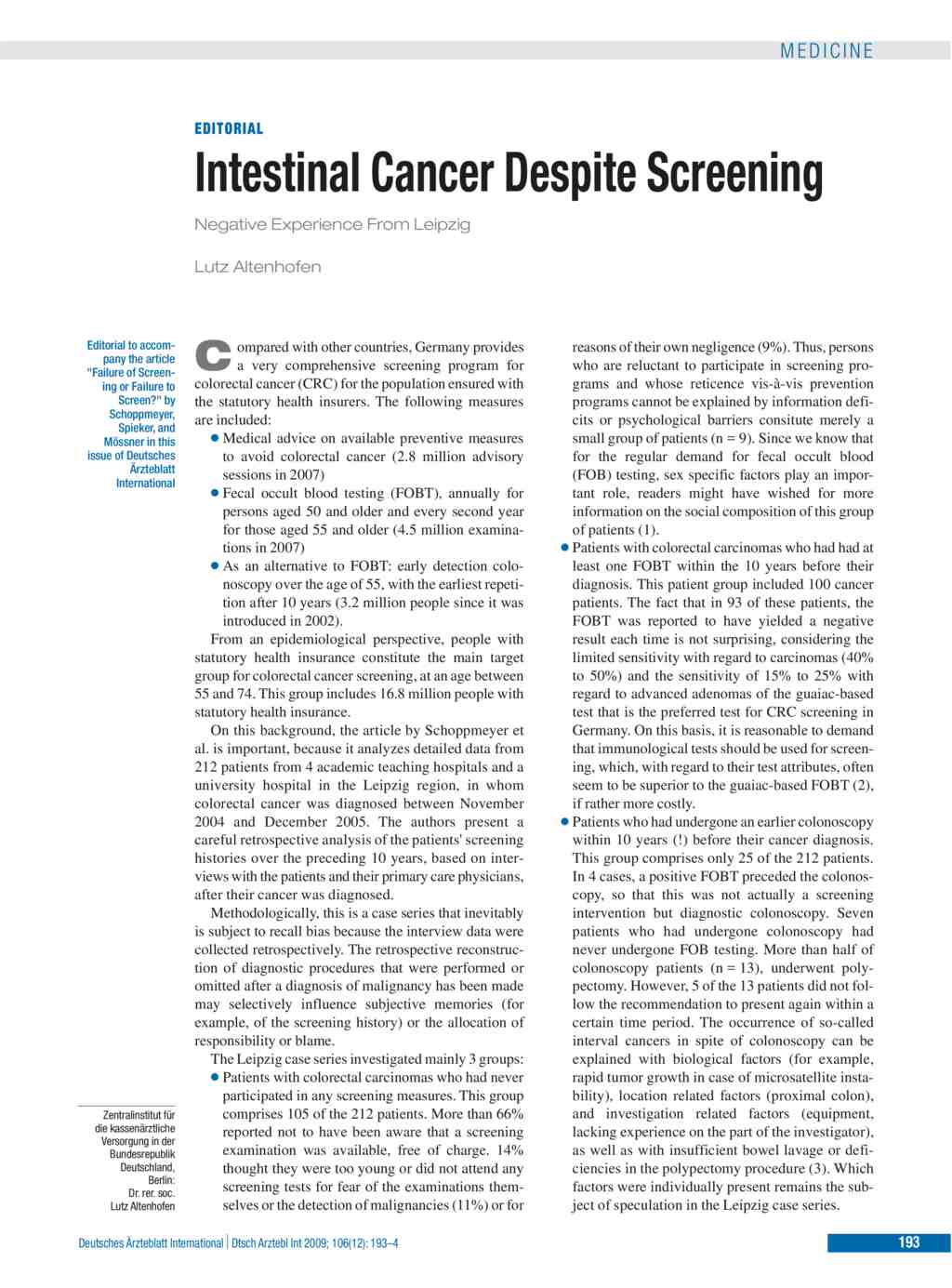