Letters to the Editor are an Important Component of the Discussion of Scientific Articles, in Deutsches Ärzteblatt as in Other Journals. Our Correspondence Pages Reflect a Diversity of Opinion Thanks to the Love of Debate Among Our Readers—and Thanks to a Few Rules.

Because we attach great importance to discussion, we allot about 8% of the page space in our Medicine section to it. This figure (gif ppt) is about the same as the one obtained some 30 years ago in a study by Spodick and Goldberg (2), who showed that the best-known English-language general-interest medical journals (JAMA, BMJ, The New England Journal of Medicine, and The Lancet) allotted about 6% of their page space to letters to the editor concerning their original articles and reviews. Spodick and Goldberg also found that specialty journals published far fewer letters to the editor than general ones—, probably because such journals have fewer readers.

The frequency of letters to the editor
Only a minority of scientific articles are answered with a letter to the editor, as our own search of the Medline database revealed: in 2007, for example, a total of 117 843 original clinical articles and reviews were published, as contrasted with only 15 313 letters and comments (figure). Even if every one of these letters and comments had concerned the original clinical articles and reviews, then less than one article in seven would have met with a response. Yet there are other types of articles that appear in medical journals as well, e.g., experimental research articles; many articles elicit more than one letter to the editor; and there are also letters to the editor that are not responses to any particular prior publication. Thus, it seems plausible to assume that less than one scientific article in ten meets with a response in the form of a letter to the editor.

The corrective function of letters to the editor
Letters to the editor can play an important corrective role in science, as a type of second peer-review process (3). Thus, when evaluating a scientific article, one should always take account of any relevant discussion that was published subsequently in letter form. The editors of the Dutch medical journal Nederlands Tijdschrift voor Geneeskunde reported, for example, that 4% of their letters to the editor pointed out important errors in articles that had appeared in the journal (4). The same holds for Deutsches Ärzteblatt: Time and again, imprecise statements have been corrected by our readers. Aside from the detection of frank errors, however, it is equally important that there should be an open discussion of evaluative matters relating to methodology, results, and conclusions.

Contributions to the correspondence section of Deutsches Ärzteblatt
Our readers' love of debate shines forth in the fact that we can print letters to the editor in response to about half of all the original articles and reviews appearing in the "Medicine" section of Deutsches Ärzteblatt. In a tabulation of all issues from 44/2007 to 43/2008, we counted 53 discussions, containing a total of 97 letters to the editor that were followed by 49 authors' replies (table gif ppt). These discussions related to a period of time in which we published 25 original articles and 84 reviews (49%).

Most of the authors of letters to the editor wrote to us because of a critical impulse: 71 of the 97 letters were critical, at least in part, while only 15 reflected an entirely or partially positive attitude to the original publication. About a quarter of the letters were more or less value-neutral (some of the letters were classified in more than one of the above categories). This distribution also reflects the editors' selection, as we want our correspondence pages to be a forum for critical voices and substantive debate. A letter to the editor that merely congratulates the original authors, without supplementing or correcting the information in the article, would hardly advance the discussion. Thus, our guiding principle is to make space for all expert opinions that we consider important, interesting, or worthy of discussion, regardless of whether we share them. Unlike other journals, we do not publish letters unrelated to articles that have appeared in the "Medicine" section.

The overall acceptance rate of letters to the editor in the time period in question was 62%. The most common reasons for rejection were identical content to other, already accepted letters, excessive length, late submission, unscientific argumentation, or ad hominem attacks. Letters of the last type are obviously inconsistent with the purpose of the correspondence section, which is to promote constructive expert debate rather than the verbal abuse of colleagues.

Persons writing letters to the editor of Deutsches Ärzteblatt often work in university hospitals (40%), though a good number work in non-academic hospitals (10%). Most often, however, they write to us from either their home address or their private practice address (46%). We noted a conflict of interest in every tenth letter; this is a lower fraction than the corresponding one for full-length articles in Deutsches Ärzteblatt (7).

Our experience shows that certain issues are especially contentious. In the time period in question, for example, the largest number of letters to the editor concerned mammographic screening (the review articles "Benefit and risk of mammography screening" [8] and "Imaging studies for the early detection of breast cancer" [9]) and the original research article "Childhood leukemia in the vicinity of nuclear power plants in Germany" (10).

Publication takes patience
Unfortunately, an interval of almost five months, on average, separates the publication of a primary article from that of the related discussion, even though we do not subject the contributions to our correspondence section to any further peer review. The delay results from the many individual steps that are needed before publication. Once the primary article is published, the readers have four weeks to respond with their letters before we make an editorial selection. We must often ask letter-writers to shorten their letters to comply with our length requirement. Sometimes, we send letter writers an editorially altered version of the original letter for their approval, after we have abridged the text ourselves or corrected grammatical errors or potentially confusing passages. Only then can we ask the author(s) of the primary article for a reply within four weeks—a deadline that some authors regrettably overrun. Once the authors' reply is received (and most authors do, indeed, reply), we prepare all contributions for publication and send proofs to all of the writers for their final approval. Finally, we must incorporate the publication of the discussion into our ongoing issue planning, in which the "Medicine" section has an especially early editorial deadline.

Rules
In view of the many letters we receive and the limited space in which we can print them, we kindly ask all letter-writers and writers of authors' replies to adhere to a few rules. We have stated these rules in the text box (gif ppt), which is recommended reading for all future contributors to our correspondence section. We happily look forward to future discussions containing our readers' thought-provoking contributions. 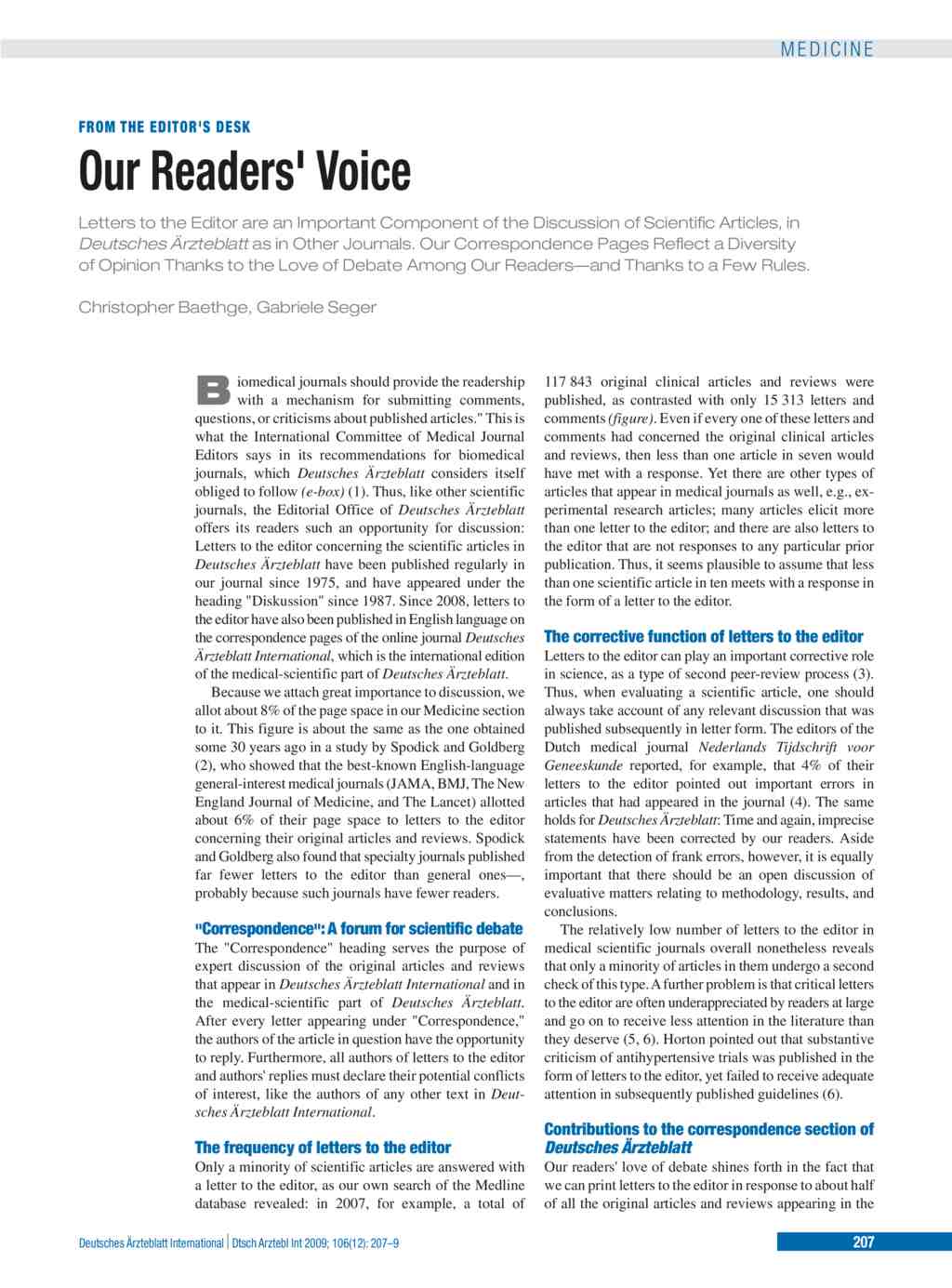