DÄ internationalArchive17/2009Quality of Life and Occupational Disability in Endocrine Orbitopathy

Quality of Life and Occupational Disability in Endocrine Orbitopathy

Endocrine orbitopathy (EO) is the most common extrathyroidal manifestation of autoimmune hyperthyroidism of the type Graves' disease (1). EO may manifest before, during, or after manifestation of the thyroid disorder (2). Rarely, EO affects patients with Hashimoto's thyroiditis or even patients whose thyroid gland is not involved (3). The symptoms of EO include loss of corneal moisture, proptosis, motility disorders with diplopia, and in the worst case, a compressed optic nerve and the threat of vision loss (4). These symptoms cause psychological stress (5) and it is obvious that additional indirect disease costs are incurred due to EO.

The current state of Germany's healthcare system makes it a compelling proposition to analyze the costs that are caused by diseases. In 2004 alone, direct disease related costs amounted to 224.9 billion euros; 1.9 billion euros of this amount were accounted for by thyroid disorders (6). So far, no studies have been undertaken into the professional sequelae of EO and the resulting health economic expenses. For this reason, researchers at the interdisciplinary orbital center of the Johannes Gutenberg-University in Mainz for the first time prospectively collected and evaluated data from 250 EO patients to shed light on this subject. In parallel, a questionnaire survey was conducted among primary care physicians who issue referrals to the interdisciplinary orbital center in Mainz, so as to compare their data with those collected at the center.

The severity of EO was classified by means of the 6 stages of the clinical severity score (CSS) (10), which includes symptoms such as retraction of the eyelid, more rarely, eyelid beat rate, inflammation of affected soft tissues, proptosis, diplopia, and whether the cornea and optic nerve are affected.

As far as diplopia is concerned, distinction is made among:

Proptosis was objectivized and quantified by measuring the sagittal distance of the corneal vertex from the lateral orbital margin (Hertel exophthalmometry).

Survey regarding EO
In addition to the described examinations in the setting of the orbit clinic, standardized postal questionnaires were sent to 400 referring physicians all over Germany. The doctors were asked to record the proportion of patients who were fully or partly unfit to work in their patient populations. Further questions asked for the duration of patients' occupational disability and impaired earning capacity. Additionally, the doctors recorded whether their patients received psychotherapy.

Statistical evaluation
The data were statistically evaluated by using the software package SPSS (11). In determining significance levels of the associations between ordinal and categorical variables, we used the Kruskal-Wallis test. This test is used to determine whether the number of values that are less than (or greater than) the common median of several variables are different within the groups. The Kruskal-Wallis test was chosen for this study because it is suitable for data with an abnormal distribution. The reported p values relate to associations/differences between all existing groups. We used the chi-square test for nominal-scale variables. The significance level was set at a = 5%, and values up to 10% were defined as a trend.

Results
Table 1 (gif ppt) shows demographical and clinical data. The response rate was 100%. Retired patients (n = 39; 15.6%) or those who were not working (n = 19; 7.6%) were not included in the statistical correlation of the data on occupational disability/impaired earning capacity.

Quality of life
As a consequence of EO, 10.7% of patients felt completely and 34.2% partly restricted in terms of their everyday functioning. 44% were able to read without restriction, 48.8% were able to drive cars. Especially patients with motility disorders felt they were functionally impaired (p<0.001).

15% reported a negative influence of the EO on their self perception as totally present and 23.1% as partly present. 76.4% of patients complained about their changed appearance. A loss in self confidence owing to EO was reported by 51.6%. Self perception was impaired especially in patients with pronounced proptosis (p<0.001).

Figures 3a (gif ppt) through 4b (gif ppt) show the associations between uptake of psychotherapy and consequences of EO for patients' occupation.

Survey regarding EO
Of the 400 physicians with their own practices who were included in the survey, 306 participated (response rate 76.5%). Of these, 71.2% were ophthalmologists, 15% endocrinologists, 9.8% specialists in nuclear medicine, 2.3% surgeons, and 1.6% radiologists. The interdisciplinary orbital center at Mainz receives referrals from all over Germany; most doctors refer patients from Rhineland-Palatinate, Hesse, and Saarland (24.7%). Substantial proportions of physicains in the large federal states (North Rhine–Westphalia 21.4%, Bavaria 13.8%, Baden-Württemberg 10.9%, and Lower Saxony 7.9%) participated in the survey. 10.8% of the completed questionnaires came from the new (post-1989) German states, and 0.3% from Austria.

62.8% of doctors treat patients who were occupationally disabled as a result of EO (tables 2a gifgif pptppt and 2b gif ppt). 75.3% reported that a proportion of their patients experienced temporarily impaired earning capacity. 33.5% treated patients with permanent occupational disability, and 27.8% patients retired early because of EO. 38.2% of doctors reported that some of their EO patients were seeking psychotherapeutic treatment.

Discussion
Existing studies of the cost of thyroid disorders in Germany primarily deal with hypothyroid iodine deficiency struma (goiter), probably because of its higher prevalence. As far as hyperthyroidism is concerned, the costs of radioiodine therapy and thyroid surgery were compared (12).

While health economic data are available for many disorders that incur potentially high costs, this is not the case for EO. For rheumatoid arthritis it has been shown that active stages of the disease are more commonly associated with impaired earning capacity (13, 14). The existing data show a similar association for EO patients. Their level of burden might be comparable to those of patients with rheumatoid arthritis as far as functional impairment and cosmetic disfigurement are concerned. In contrast to EO, however, which can mostly be cured or stabilized, rheumatoid arthritis takes a chronic relapsing course and causes permanent damage. In spite of some similarities between the two disorders, the differences are therefore too substantial to be able to compare data. Some studies have shown the way in which keratoconjunctivitis sicca (15) and strabismus (16) incur indirect costs. EO patients also often have dry eyes and motility disorders; however, these symptoms do not occur in isolation but as part of a complex of symptoms. For this reason, keratoconjunctivitis sicca and accompanying strabismus are not comparable to EO in terms of the resultant functional and psychosocial burdens.

Occupational disability and impaired earning capacity
More than one third of patients in the cohort who were in full time work became unfit to work owing to EO. About half of those were occupationally disabled for less than one month, but one fifth were permanently disabled. By comparison, according to data for 2007 from the Allgemeine Ortskrankenkasse (AOK), a large general statutory health insurance company with the biggest market share in Germany, in the total population, 92.6% were unfit to work for less than 1 month and 65.4% for less than 1 week (17, 18). Only 3.3% were unfit to work for more than 1 month and 4.2% permanently (by definition, this means for more than 42 days).

In 2004, some 4.2 million working years were lost in the total working population (19). Of the EO patients in the current study, more than a quarter experienced impaired earning capacity temporarily or permanently.

The federal health report, which brings together health data and information from more than 100 sources in a central repository, as well as the AOK unfortunately capture data only by main diagnoses according to ICD-10. EO does not appear with its own listing anywhere. On the basis of the current study it may be assumed, however, that EO as the most severe manifestation of autoimmune thyroid disorders may in future be of particular importance in terms of incurring indirect costs.

The data we presented show that occupational disability and impaired earning capacity are associated with the clinical finding. Especially patients with severe EO and motility disorders were unfit to work for long periods of time, and their earning capacity was more commonly impaired. Of note, however, is the fact that neither occupational disability nor impaired earning capacity were correlated with proptosis. This indicates that for patients to be able to work, functional impairments played a greater part than cosmetic ones.

Quality of life and psychotherapy
Our data confirm the results of earlier studies (5, 9, 20) of the impaired quality of life and psychological burden in EO. In the present study, about half of patients reported impairments to everyday functioning and/or to their own self perception as a result of EO. One fifth of EO patients had psychotherapy. According to data from the Federal Psychotherapists' Chamber, some 300 000 patients seek outpatient psychotherapy each year (21), which amounts to 0.36%, based on a population count of 82 258 000 (22). In the study cohort, EO patients had psychotherapy almost 60 times more often. Patients with severe proptosis or a higher diplopia score did not complain only about impaired quality of life but were also more likely to be having psychotherapy. Professional impairments therefore resulted from the burdensome functional symptoms, such as diplopia. Simultaneously, patients with severe cosmetically disfiguring, symptoms, such as severe proptosis, were more likely to seek psychotherapy. In particular patients who underwent psychotherapy were unfit to work and had impaired earning capacity.

Survey regarding EO
The survey results confirmed the data of 250 EO patients from the interdisciplinary orbital center in Mainz. Most of the doctors participating in the survey had patients who were unfit to work as a result of EO. Three quarters treated patients whose earning capacity was impaired temporarily, and one third treated patients whose were permanently disabled. One third of physicians in private practice reported that some of their EO patients were having psychotherapy.

The cohort of EO patients that were cared for by physicians in private practice had a similar psychophysical profile to those of the interdisciplinary orbital center. The conclusion is that patients in private practices or the tertiary sector do not widely differ from each other in terms of the socioeconomic sequelae of EO.

Limitations of the study
The results of the current study have certain limitations. As the patients were cared for in an orbital center, selection bias may have occurred because the cases in such centers tend to be more severe; the patients suffer more, suffer more negative consequences professionally, and are more likely to have psychotherapy. Patients were asked about occupational disability and impaired earning capacity, but calculations of the actual resulting costs are lacking. The survey of physicians who work in the specialized area permits conclusions about their cohort of EO patients. However, an extension of the survey is desirable, so as to be able to draw conclusions that would be of general validity for primary care physicians.

Conclusions for clinical practice
The current data—the first to have been compiled for EO—show that patients may experience restrictions to their earning capacity and seek psychotherapy more often. The fact that mainly patients with severe EO and motility disorders suffer impairments to their quality of life and their professional lives, and that patients who were unfit to work or whose earning capacity was impaired for longer periods were more likely to have psychotherapy, underlines the need for prevention and stage appropriate interdisciplinary treatment. If EO is severe, motility disorders exist, and accompanying psychotherapy is desired, optimal care can be provided in an interdisciplinary orbital center (23), where endocrinologists, ophthalmologists, specialists in nuclear medicine, radiologists, and psychosomatic specialists work in close collaboration. Our survey shows that physicians in private practice also delivered care for patients whose earning capacity was impaired or were unfit to work and who were receiving psychotherapy. The responsibility for deciding when to refer patients to appropriate experts is in their hands.

This original article included parts of the doctoral thesis of Katharina A Ponto and was supported by Forum Schilddrüse (German thyroid association, a non-profit organization). 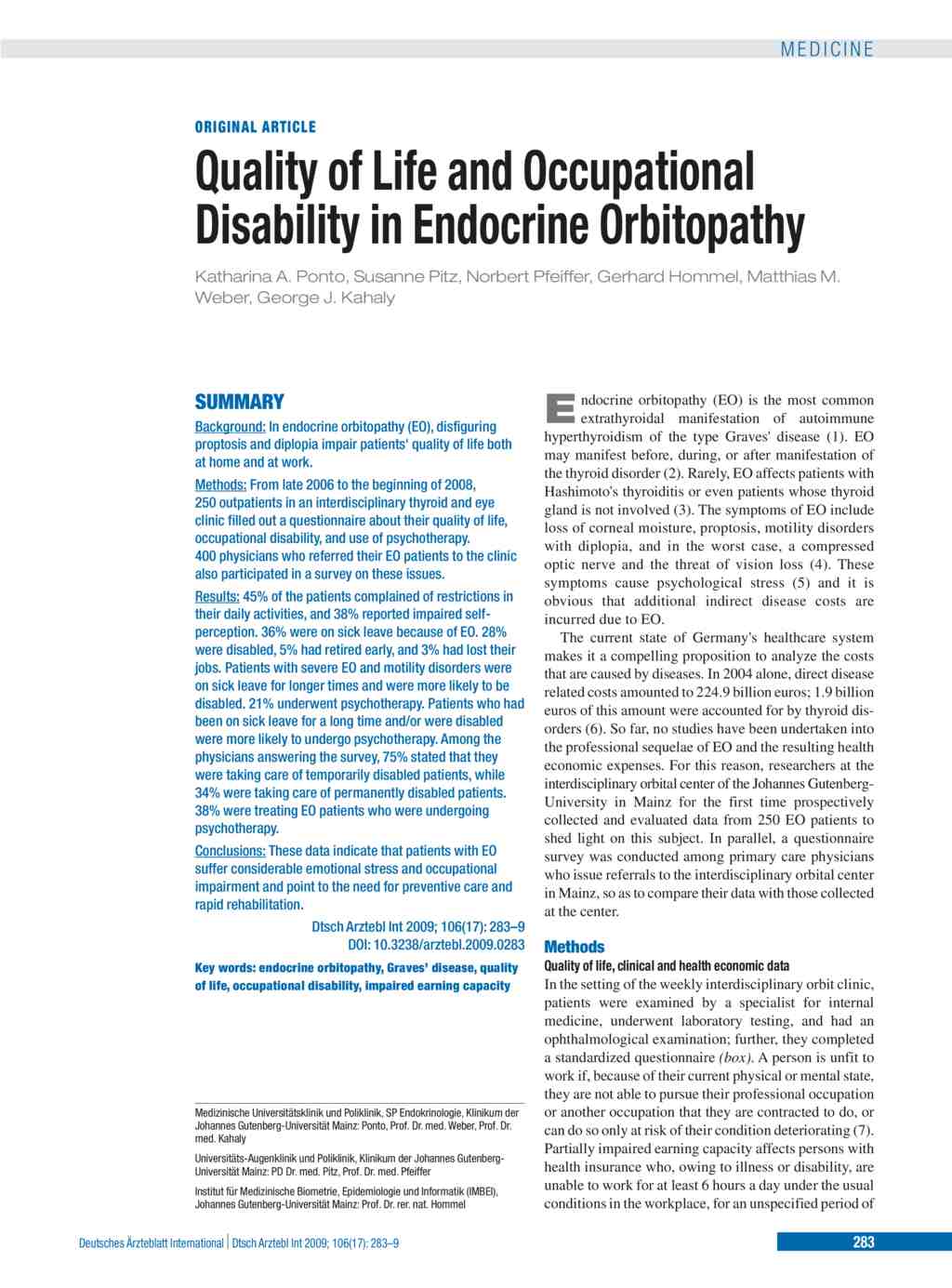