DÄ internationalArchive17/2009Causes and Early Diagnosis of Vitamin B12 Deficiency: In reply

Causes and Early Diagnosis of Vitamin B12 Deficiency: In reply

Koch reported normal serum concentrations of vitamin B12 and raised gastrin levels in atrophic gastritis in spite of vitamin B12 deficiency. We can confirm that a false positive B12 concentration is often observed since the diagnostic sensitivity of B12 measurements is relatively low. The proportion of metabolically active holotranscobalamin (holo-TC) in total B12 is 10–30%. A normal total B12 measurement in spite of a deficiency in metabolically active holo-TC can thus be explained. Measuring holo-TC is diagnostically more sensitive; additionally measuring MMA provides clues about whether the deficiency already affects the patient's metabolism—that is, whether the homocystein-methionin cycle is disrupted. In our own studies we showed that the relation between total B12 values and holo-TC values is not linear, but that in B12 serum levels below 300 pmol/l the percentage share of holo-TC in total B12 clearly drops, so that especially in the diagnostically interesting range of possible B12 deficiency the examination of total B12 fails and the B12 status therefore appears normal.

In the blood, vitamin B12 is present mainly as holohaptocorrin and 10–30% as metabolically active holo-TC, which is absorbed into the cells via ubiquitous transcobalamin receptors. Intracellularly, hydroxycobalamin bound to transcobalamin is separated; it is transformed into methylcobalamin or adenosylcobalamin and functions as an enzyme cofactor (methionin synthase and methylmalonyl-CoA mutase) or is stored as such. The statement that the recommended dosages of B12 are too low is correct. Since vitamin B12 is non-toxic and surplus amounts are excreted, high B12 dosages are unproblematic. However, only limited amounts of the B12 ingested in food reach the blood circulation via the receptor pathway. Additionally, a smaller proportion (3%) is absorbed via passive diffusion, independent of the receptors.

This means that high oral doses of vitamin B12 can result in sufficient amounts of B12 being absorbed into the blood stream via diffusion. Particularly elderly people often have vitamin B12 deficiency because of malabsorption. Daily oral administration of 0.5–1 mg vitamin B12 often result in metabolic normalization, without having to use parenteral B12 injections (1, 2). Regular laboratory controls using the modern markers of B12 status (holo-TC and MMA) is required.

Examining MMA in urine is without doubt an alternative method for confirming functional vitamin B12 deficiency. In principle, however, measuring MMA in urine is no different to measuring plasma concentrations (gas chromatography/mass spectrometry). On the contrary, the diagnostic specificity and sensitivity is higher in plasma measurements than in urine measurements, especially because the decision thresholds are much more clearly defined and international agreement has been reached (3, 4). Our diagnostic scheme cannot be shortened by measuring MMA in urine. Holo-TC as the parameter of choice captures manifest vitamin B12 deficiency, but also the stage of store depletion, where the B12 balance is negative but no functional deficit has yet developed. MMA is raised only once the reserves have been depleted, once the vitamin B12 deficiency has metabolic sequelae. Measuring MMA has diagnostic limitations because it is also raised in impaired renal function, among others. As far as MMA screening in urine is concerned, we wish to point out that this is expensive and available in only few centers. Holo-TC measurements can be conducted anywhere as an automated and standardized test.
DOI: 10.3238/arztebl.2009.0292 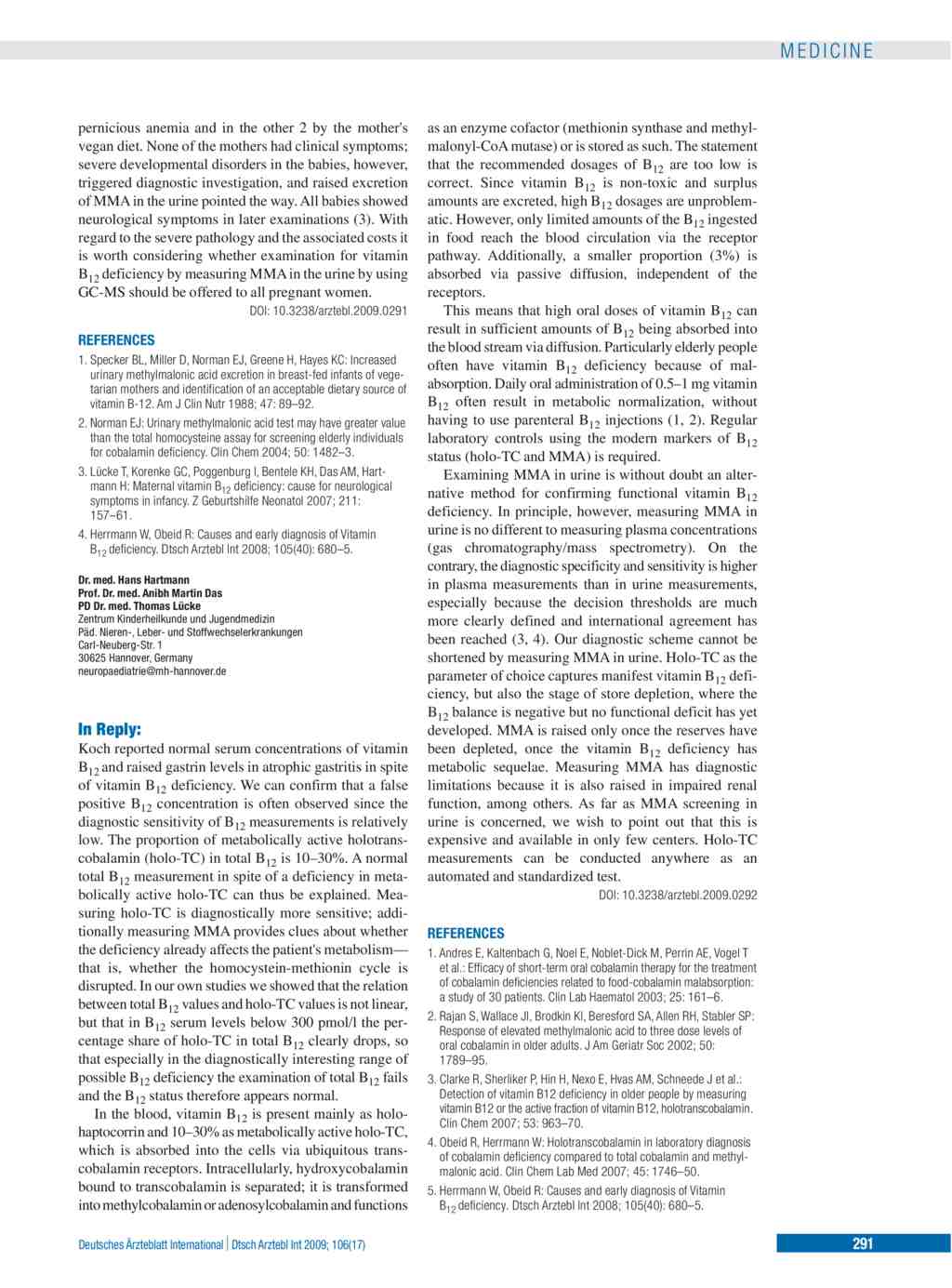