Binge Drinking in Childhood and Adolescence

Background: Episodic excessive alcohol consumption ("binge drinking") among children and adolescents has become a serious public health problem in Germany and is associated with a variety of risks.
Methods: Selective literature search of the Ovid Medline database from 1998 to 2008.
Results: Episodic excessive alcohol consumption is associated not only with somatic complications, but also with traffic accidents and other types of accident, violent behavior, and suicide. The more frequently a child or adolescent drinks to excess, and the younger he or she is, the greater is the risk of developing an alcohol-related disorder (alcohol misuse or dependence syndrome). In the USA, brief motivational interventions have been shown to have a small to medium-sized beneficial effect in reducing further binge drinking and its complications.
Conclusions: The intervention HaLT ("Stop," also an acronym for Hart am Limit—"near the limit") is performed in a number of regions in Germany. Further types of brief motivating intervention should be developed and evaluated to prevent the development of alcohol-related disorders, where indicated, in children and adolescents that engage in binge drinking.
Dtsch Arztebl Int 2009; 106(19): 323–8
DOI: 10.3238/arztebl.2009.0323
Key words: alcohol consumption, child health, adolescent health, alcohol dependence, short-term treatment

According to recent reports by the German Federal Commissioner for Narcotic Drugs (Bundesdrogenbeauftragte), the number of adolescents (aged up to 20 years) treated in hospital for alcohol poisoning more than doubled between 2000 and 2007, from 9500 to 23 165. Their "binge drinking" style of consumption attracts media descriptions such as "Komasaufen" ("coma swilling") or "Kampftrinken" ("combat drinking") at so-called "flat-rate parties." About 3800 of these patients were between 10 and 15 years old; the group of intoxicated adolescent girls has particularly increased.

This article aims to provide up-to-date epidemiological data and recent results on the etiology and clinical consequences of episodic excessive alcohol consumption among adolescents. In addition, we present a practical tool for everyday clinical routine: brief motivational interventions to prevent further binge drinking events and their associated complications. The authors report on the evidence recently presented in a meta-analysis of randomized controlled studies.

Methods
The literature search on binge drinking used the Ovid Medline database, with the Basic Search function, specifications "including related terms"; years 1999–2008; terms "adolesc* AND heavy drink*," resulting in 140 sources. The choice was narrowed down by studying the abstracts, concentrating on publications dating from 2005 and after. The search on brief motivational interventions for binge drinking was similar, using the terms "adolesc* AND heavy drink* AND brief intervent*," resulting in 336 sources. In this case, the choice was narrowed by studying those abstracts explicitly relating to controlled studies of brief interventions. To supplement all this, our literature search also included current specialist book publications and publications from government departments such as the Federal Center for Health Education (Bundeszentrale für gesundheitliche Aufklärung, BZgA) and the Federal Commissioner for Narcotic Drugs.

Epidemiology
Exemplary for Germany are the telephone sample surveys carried out by the BZgA (12- to 17-year-olds) and the international comparison ESPAD studies (European School Survey Project on Alcohol and other Drugs; written questionnaire, 15- to 16-year-olds).

The question as to whether binge drinking increased significantly between 2003 and 2007 cannot be answered on the basis of the ESPAD data. However, they do show a clear shift towards a higher frequency of drinking events per month. Boys tend to drink more often than girls.

Developmental psychology perspectives
In Western-orientated societies, learning to handle alcohol appropriately is one of the obligatory developmental tasks of adolescence. Adolescents try to use alcohol consumption to help solve some of the developmental tasks that are relevant in adolescence. Drinking alcohol demonstrates autonomy, "being grown up," and thus appears to support the achievement of separation from the parents. In addition, it can help adolescents find supposed solutions to interpersonal developmental tasks such as securing high status within the peer group and starting to approach contact (including erotic contact) with others of the same age (box 1 gif ppt). In most cases functional social adult roles are adopted and patterns of excessive alcohol consumption are dropped during later development ("maturing out").

A systematic review of the state of research in Europe distinguishes two divergent strands of motivation for binge drinking (4):

- Group 1 drink in the expectation of fun, exciting experiences, pleasure, and facilitation of social contact. The aim is to overcome social inhibitions; the expectation of increased sexual activity plays a large role in this (for both sexes).
- Group 2 drink to reduce tension, overcome stress, and as a kind of self-medication to regulate negative affect.

A large percentage of adolescents who report binge drinking also consume other psychotropic substances. High-school students in the 9th to 12th grades who were in a binge drinking group had a higher 30-day prevalence than their "non-binge-drinking" peers of tobacco use (61% vs. 34%), cannabis use (59% vs. 28%) and the use of other illegal drugs (34% vs. 10%) (7).

Risks and negative consequences
Road traffic accidents are the main cause of death among adolescents, and among 15- to 20-year-olds a third of all fatal road accidents are associated with drinking alcohol (e3). Adolescents who binge drink more often ride a bicycle without a helmet. They also more often drink-drive, or are the passenger of a drink-driver. In the USA, 50% of all head injuries in adolescents are associated with alcohol consumption (25) (box 3 gif ppt).

Binge drinking is associated with earlier sexual activity and frequently changing sexual partners. It is also associated with a higher rate of unwanted (teenage) pregnancy, sexually transmitted diseases, infertility, and drinking during pregnancy with the risk of alcohol-related damage to the fetus. The risk to adolescent girls of becoming the victim of unwanted sexual activity increases to about three times if they binge drink. Just under 50% of a population of adolescent girls who reported sexual assault had consumed alcohol or other psychotropic substances beforehand (10).

Repeated excessive drinking events markedly increase the risk of developing an alcohol-related disorder (ICD-10, harmful use/dependence syndrome). Particular risk constellations include, in addition to social and genetic factors, starting drinking early in life and frequent drinking events. Adolescents who start to drink regularly before the age of 15 are at four times the risk of developing alcohol dependence compared to those who do not start regular drinking until they are 20 (24). If we could shift the age at which drinking starts by 5 years, the risk of significant alcohol-related problems would drop by 50% (12).

Neurobiological perspectives
By increasing the effectiveness of the inhibiting neurotransmitter GABA (gamma-aminobutyric acid) and simultaneously reducing the activity of the stimulating neurotransmitter glutamate, alcohol consumption has a sedative effect that has a damping effect on cognitive and motor abilities. At the same time, alcohol use is associated with an increase in CNS activity in certain regions of the brain such as the limbic system. The release of endorphins and dopamine, both of which are effective neurotransmitters in the so-called reward system, is increased (13). Memory and learning functions are reduced via the alcohol-induced drop in glutamate activity and the reduced stimulation of a specific glutamate receptor (N-methyl-D-aspartate, NMDA), which is associated with improved learning ability and retentiveness. The repeated depression of the glutamate-NMDA system can lead to compensatory overexcitability of the NMDA receptors during phases of alcohol abstinence. The system, already impaired because of the NMDA overexcitability, is put under additional, potentially toxic stress by the increased glucocorticoid release triggered by each short-term withdrawal phase. Through this mechanism, episodic binge drinking can develop a neurotoxic effect. Verbal and nonverbal cognitive limitations and impairment of spatial orientation that outlast both the drunken state and the withdrawal ("hangover") can be the result (13).

Adolescents show brain maturation processes continuing beyond the age of 20. The prefrontal cortex and limbic system in particular (especially the hippocampus and amygdala) undergo increased myelinization and restructuring of the synapses. It is assumed that these maturation processes make the adolescent brain susceptible to "neurotoxic stress." In adolescents, early onset of drinking and alcohol misuse over several years are associated with a subsequent reduction in volume of the hippocampus (14). Experimental studies in rodents have shown that compared to the adult brain, the adolescent brain is particularly sensitive to the effects of alcohol, and that irreversible neurodegenerative damage can be induced (15).

Brief motivational interventions
Adolescents tend to underestimate how drunk they are, and describe repeated excessive drinking as harmless. Even when from a medical point of view their pattern of consumption is unambiguously high-risk, they describe themselves as at most an "occasional party drinker." In most cases, medical treatment for alcohol poisoning at a hospital emergency department is their first contact with the support system. This "on the edge" brush with their own vulnerability in the setting of the emergency department promotes a readiness to change the high-risk pattern of alcohol use, if the right intervention is used (16). Classical interventions such as individual counseling combined with psychoeducational elements and the offer of self-help groups are not reliable in effectively modifying drinking behavior, and in addition they are time-consuming and personnel-intensive. A more effective approach has been shown to be manualized brief interventions in one to four sessions lasting 30 to 60 minutes each, carried out by trained staff at the hospital. The interventions are carried out in accordance with a semistructured outline (manual) and using worksheets. Emphasis is laid on motivational interviewing techniques (17). These techniques were developed for highly ambivalent adult clients of the addiction support system. In this view, motivation is not a stable condition, but a changeable, interactive process that is strongly influenced by the style of the counselor/therapist. Characteristics of motivational interviewing are shown in box 4 (gif ppt). According to a meta-analysis, the average effect size of motivational interviewing in the area of alcohol consumption in adults is moderate, and at 3 months after intervention it is d = .41 (d = effect; standardized difference between a group with motivational interviewing and a group without. A moderate effect is between .40 and .70) (18).

In a meta-analysis of randomized controlled intervention studies of the efficacy of brief interventions on binge drinking among college students in the USA, at various follow-up intervals, smaller effect sizes were shown (21) (table 3 gif ppt).

Table 3
Enlarge All figures
Binge Drinking in Childhood and Adolescence 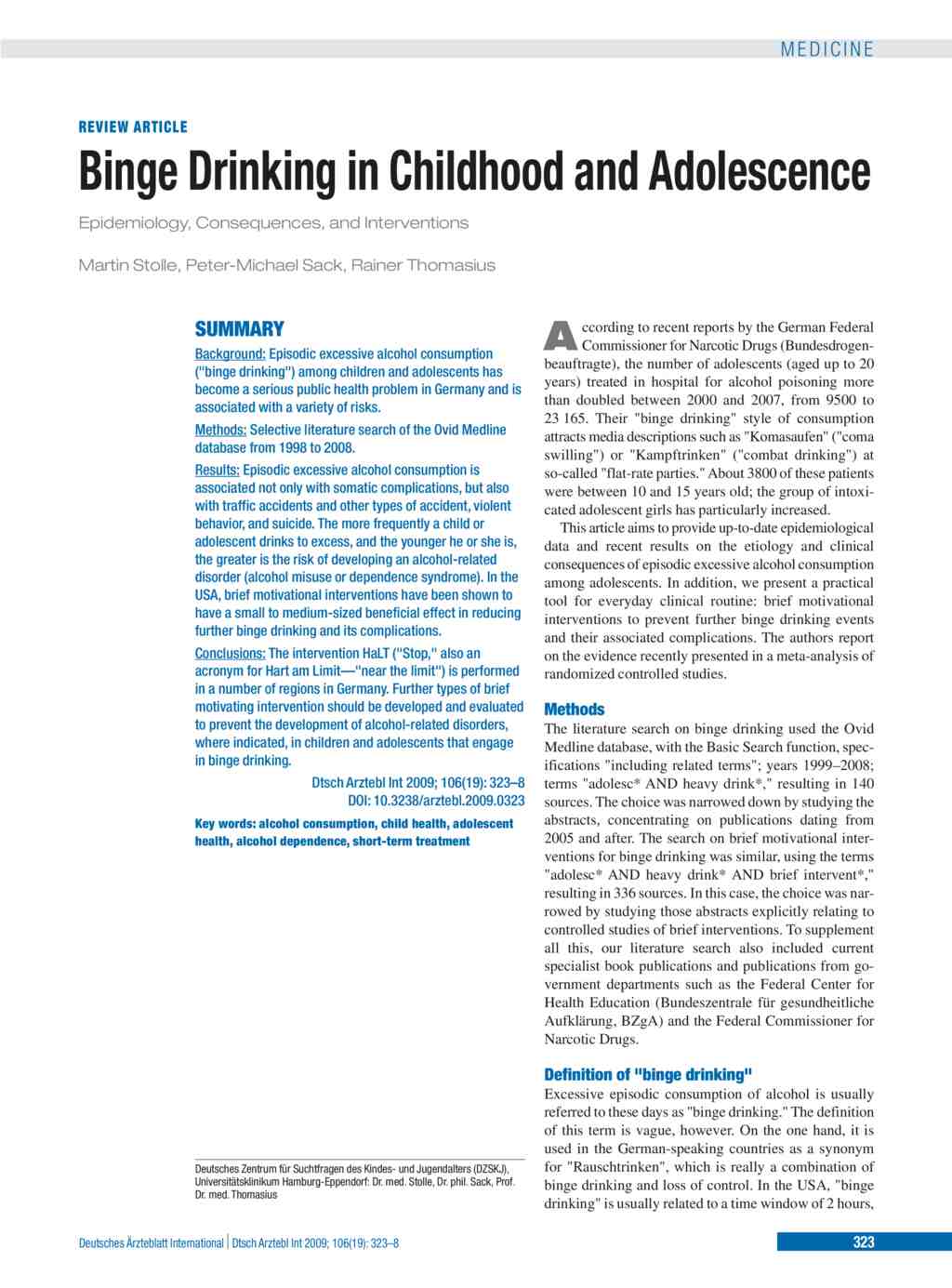