Confidence Interval or P-Value? Part 4 of a Series on Evaluation of Scientific Publications

Background: An understanding of p-values and confidence intervals is necessary for the evaluation of scientific articles. This article will inform the reader of the meaning and interpretation of these two statistical concepts.
Methods: The uses of these two statistical concepts and the differences between them are discussed on the basis of a selective literature search concerning the methods employed in scientific articles.
Results/Conclusions: P-values in scientific studies are used to determine whether a null hypothesis formulated before the performance of the study is to be accepted or rejected. In exploratory studies, p-values enable the recognition of any statistically noteworthy findings. Confidence intervals provide information about a range in which the true value lies with a certain degree of probability, as well as about the direction and strength of the demonstrated effect. This enables conclusions to be drawn about the statistical plausibility and clinical relevance of the study findings. It is often useful for both statistical measures to be reported in scientific articles, because they provide complementary types of information.
Dtsch Arztebl Int 2009; 106(19): 335–9
DOI: 10.3238/arztebl.2009.0335
Key words: publications, clinical research, p-value, statistics, confidence interval

People who read scientific articles must be familiar with the interpretation of p-values and confidence intervals when assessing the statistical findings. Some will have asked themselves why a p-value is given as a measure of statistical probability in certain studies, while other studies give a confidence interval and still others give both. The authors explain the two parameters on the basis of a selective literature search and describe when p-values or confidence intervals should be given. The two statistical concepts will then be compared and evaluated.

What is a p-value?
In confirmatory (evidential) studies, null hypotheses are formulated, which are then rejected or retained with the help of statistical tests. The p-value is a probability, which is the result of such a statistical test. This probability reflects the measure of evidence against the null hypothesis. Small p-values correspond to strong evidence. If the p-value is below a predefined limit, the results are designated as "statistically significant" (1). The phrase "statistically striking results" is also used in exploratory studies.

P-values alone do not permit any direct statement about the direction or size of a difference or of a relative risk between different groups (1). However, this would be particularly useful when the results are not significant (2). For this purpose, confidence limits contain more information. Aside from p-values, at least a measure of the effect strength must be reported—for example, the difference between the mean decreases in blood pressure in the two treatment groups (3). In the final analysis, the definition of a significance limit is arbitrary and p-values can be given even without a significance limit being selected. The smaller the p-value, the less plausible is the null hypothesis that there is no difference between the treatment groups.

Confidence limits—from the dichotomous test decision to the effect range estimate
The confidence interval is a range of values calculated by statistical methods which includes the desired true parameter (for example, the arithmetic mean, the difference between two means, the odds ratio etc.) with a probability defined in advance (coverage probability, confidence probability, or confidence level). The confidence level of 95% is usually selected. This means that the confidence interval covers the true value in 95 of 100 studies performed (4, 5). The advantage of confidence limits in comparison with p-values is that they reflect the results at the level of data measurement (6). For instance, the lower and upper limits of the mean systolic blood pressure difference between the two treatment groups are given in mm Hg in our example.

If a confidence interval is given, several conclusions can be made. Firstly, values below the lower limit or above the upper limit are not excluded, but are improbable. With the confidence limit of 95%, each of these probabilities is only 2.5%. Values within the confidence limits, but near to the limits, are mostly less probable than values near the point estimate, which in our example with the two antihypertensives is the difference in the mean values of the reduction in blood pressure in the two treatment groups in mm Hg. Whatever the size of the confidence interval, the point estimate based on the sample is the best approximation to the true value for the population. Values in the vicinity of the point estimate are mostly plausible values. This is particularly the case if it can be assumed that the values are normally distributed.

A frequent procedure is to check whether confidence intervals include a certain limit or not and, if they do not, to regard the findings as being significant. It is however a better approach to exploit the additional information in confidence intervals. Particularly with so-called close results, the possibility should be considered that the result might have been significant with a larger sample.

Unfortunately, statistical significance is often thought to be equivalent to clinical relevance. Many research workers, readers, and journals ignore findings which are potentially clinically useful only because they are not statistically significant (4). At this point, we can criticize the practice of some scientific journals of preferably publishing significant results. A study has shown that this is mainly the case in high–impact factor journals (10). This can distort the facts ("publication bias"). Moreover, it can often be seen that a non-significant difference is interpreted as meaning that there is no difference (for example, between two treatment groups). A p-value of >0.05 only signifies that the evidence is not adequate to reject the null hypothesis—for example, that there is no difference between two alternative treatments. This does not imply that the two treatments are equivalent. The quantitative compilation of comparable studies in the form of systematic reviews or meta-analyses can then help to identify differences which had not been recognized because the number of cases in individual studies had been too low. A special article in this series is devoted to this subject.

- The advantage of confidence intervals in comparison to giving p-values after hypothesis testing is that the result is given directly at the level of data measurement. Confidence intervals provide information about statistical significance, as well as the direction and strength of the effect (11). This also allows a decision about the clinical relevance of the results. If the error probability is given in advance, the size of the confidence interval depends on the data variability and the case number in the sample examined (12).

- P-values are clearer than confidence intervals. It can be judged whether a value is greater or less than a previously specified limit. This allows a rapid decision as to whether a value is statistically significant or not. However, this type of "diagnosis on sight" can be misleading, as it can lead to clinical decisions solely based on statistics.

- Hypothesis testing using a p-value is a binary (yes-or-no) decision. The reduction of statistical inference (inductive inference from a single sample to the total population) to this level may be simplistic. The simple distinction between "significant" and "non-significant" in isolation is not very reliable. For example, there is little difference between the evidence for p-values of 0.04 and of 0.06. Nevertheless, binary decisions based on these minor differences lead to converse decisions (1, 13). For this reason, p-values must always be given completely (suggestion: always to three decimal places) (14).

- When a point estimate is used (for example, difference in means, relative risk), an attempt is made to draw conclusions about the situation in the target population on the basis of only a single value for the sample. Even though this figure is the best possible approximation to the true value, it is not very probable that the values are exactly the same. In contrast, confidence intervals provide a range of possible plausible values for the target population, as well as the probability with which this range covers the real value.

- In contrast to confidence intervals, p-values give the difference from a previously specified statistical level α (15). This facilitates the evaluation of a "close" result.

- Statistical significance must be distinguished from medical relevance or biological importance. If the sample size is large enough, even very small differences may be statistically significant (16, 17). On the other hand, even large differences may lead to non-significant results if the sample is too small (12). However, the investigator should be more interested in the size of the difference in therapeutic effect between two treatment groups in clinical studies, as this is what is important for successful treatment, rather than whether the result is statistically significant or not (18).

Conclusion
Taken in isolation, p-values provide a measure of the statistical plausibility of a result. With a defined level of significance, p-values allow a decision about the rejection or maintenance of a previously formulated null hypothesis in confirmatory studies. Only very restricted statements about effect strength are possible on the basis of p-values. Confidence intervals provide an adequately plausible range for the true value related to the measurement of the point estimate. Statements are possible on the direction of the effects, as well as its strength and the presence of a statistically significant result. In conclusion, it should be clearly stated that p-values and confidence intervals are not contradictory statistical concepts. If the size of the sample and the dispersion or a point estimate are known, confidence intervals can be calculated from p-values, and conversely. The two statistical concepts are complementary. 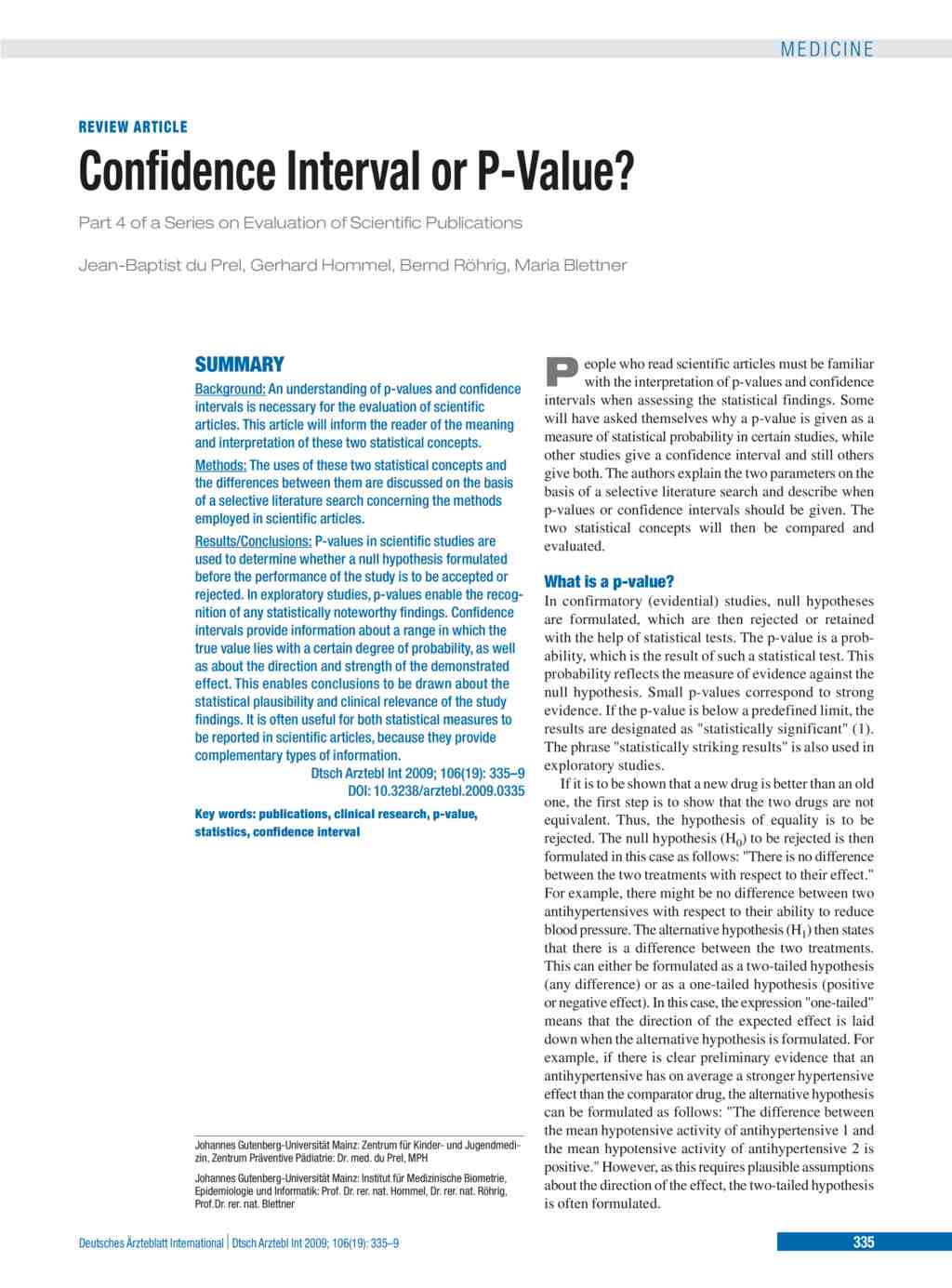