Universal Auditory Screening of Neonates and Hearing Disorders in Childhood

Figure: Automated evaluation of auditory evoked potentials with an AABR (automated auditory brainstem response) system for neonatal auditory screening. The examiner holds a loudspeaker containing built-in electrodes to the ear of a 3-day-old child. The auditory stimuli and the automated evaluation of the response are processed by a computer program (PC in the background). Positive results must be confirmed by further diagnostic testing. All results are reported to a coordinating office and are also documented in the child's yellow preventive care booklet, along with an identifying number.
The decision was taken to make universal newborn hearing screening (UNHS) mandatory across Germany as of January 1, 2009. (The Federal Joint Committee [Gemeinsamer Bundes­aus­schuss], which is the main self-governing body of health care providers and health insurance companies in Germany, announced a decision to amend the pediatric guidelines in its statement dated June 19, 2008, entitled "Einführung eines Neugeborenen-Hörscreenings" ["Introduction of Auditory Screening of Neonates"], as was previously reported in Deutsches Ärzteblatt; see Dtsch Arztebl 2008; 105[43]: A 2239 [article in German].) This program enables the earlier diagnosis and treatment of uni- or bilateral hearing impairment of magnitude 35 dB or more in newborn children. The introduction of nation-wide UNHS was also the major topic of the 25th Scientific Meeting of the German Society for Phoniatry and Pediatric Audiology [Deutsche Gesellschaft für Phoniatrie und Pädaudiologie, DGPP], which was held in Düsseldorf in September 2008.

Until now, UNHS was performed in only some of the German federal states. It became mandatory across the country at the beginning of this year, along with the associated quality assurance mechanisms and provisions for follow-up care. Thus, a child's first test for potential hearing impairment no longer takes place at the age of about two and half years, as in the past, but rather shortly after birth. The experts predict that this will bring about long-term improvements in speech acquisition and educational opportunities.

Auditory screening of neonates
In their presentations to the Society, Rainer Schönweiler of Lübeck and Katrin Neumann of Frankfurt discussed the now mandatory procedure for auditory screening. The first test must be performed when the child is no more than 3 days old (see figure). Children born at home must undergo UNHS no later than the second routine neonatal examination, which is to take place between days 3 and 10; high-risk newborns must be tested before they are 3 months old. Healthy newborns may be tested either by the detection of sound waves produced by the ear in response to auditory stimulation (OAE) or by automated auditory evoked potentials (known as the automated auditory brainstem response, AABR). High-risk newborns must always be tested with AABR. If the examining physician finds a positive test result, follow-up testing is required within two weeks. Confirmatory diagnostic testing may be performed only by a phoniatrist or pediatric audiologist (i.e., a medical specialist for disorders of the voice, speech, and hearing in children) or by an otorhinolaryngologist with expertise in pediatric audiology. These precisely stated requirements for the times of examination are based on an international consensus and present a major logistical challenge for all persons involved.

The etiology and diagnostic evaluation of hearing disorders
Auditory neuropathies are a special category of disorders causing central (sensorineural) hearing impairment. They seriously impair the acquisition of speech. At the Düsseldorf meeting, new discoveries in the genetics of these disorders were presented.

In a session on auditory processing disorder (APD), new findings were presented on auditory localization, the electrophysiological detection of functional impairment, and auditory short-term memory functions.

Hartmut Hengel of Düsseldorf provided an overview of the pathogenesis, treatment, and immune prophylaxis of cytomegalovirus (CMV) and papilloma virus infections. Congenital CMV infection is the most common non-genetic cause of sensorineural hearing loss among children in industrialized countries. Children with asymptomatic infections also develop hearing impairment, which often takes a progressive course. CMV-DNA quantification is thus helpful for the identification of neonates at risk of developing hearing impairment. Retrospective diagnosis with dried blood filter cards is also feasible. Ganciclovir is the recommended treatment.

Potential applications of deep brain stimulation
On another topic, Alfons Schnitzler of Düsseldorf informed the Society of potential new therapeutic applications of deep brain stimulation (brain pacemakers). In recent years, this method has brought about major advances in the treatment of patients with neurological movement disorders. An implanted electrical stimulator resembling a cardiac pacemaker is connected through a cable to a stimulating electrode implanted in a particular target structure deep in the brain. Continuous electrical stimulation of the target structure blocks the neural areas that are responsible for typical disease manifestations, such as the rest tremor of Parkinson's disease. Experience to date has shown that deep brain stimulation worsens dysarthric manifestations in some patients, yet further refinements of the method are expected to bring substantial advances in the treatment of patients with severe, intractable dysarthria. 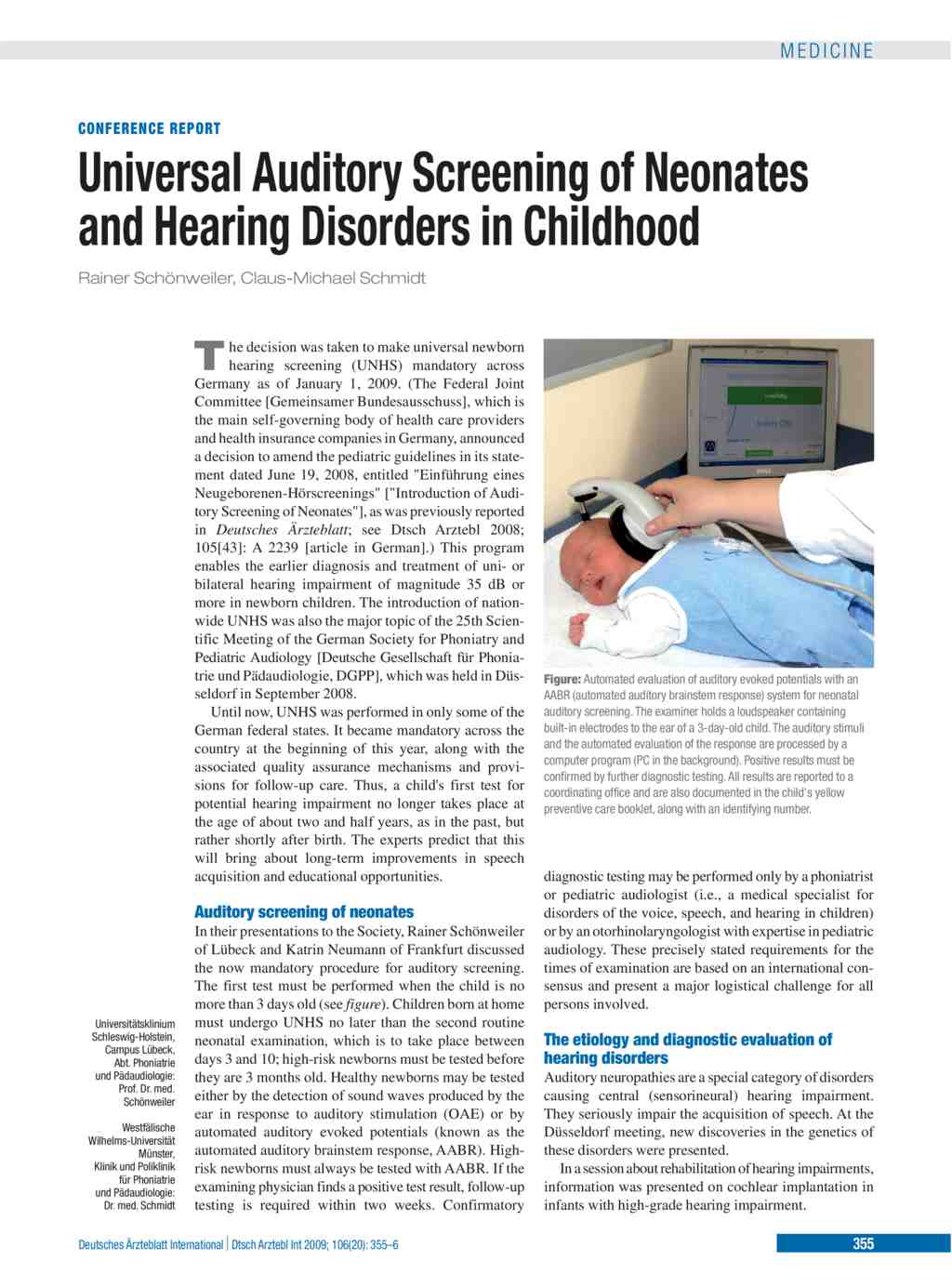