Even in the Lay Press

It Is Far From True That German Science Journalists Only Cite English Language Medical Journals. An Evaluation of the Citation Habits of the FAZ, the Spiegel, the SZ, the Welt, and the Zeit

Citations rule the world—at least the world of academic medicine. Because of the importance of the impact factor, medical journals are dependent on being cited as often as possible in other medical journals. This is also true of Deutsches Ärzteblatt International, which, after its inclusion in the Science Citation Index in 2009, is expecting its first impact factor in 2011 (1).

In this situation, it is easy to forget that citations in the lay press too are important for medical journals. Being mentioned in the general media may not enhance the impact factor, but is a sign of how important the public deems a journal. By studying the German lay press one can gain an impression as to whether the prejudice that medicine is completely anglicized is correct. Is it really true that only English language journals are important in the work of a German medical journalist?

We have analyzed how often leading German lay media mentioned German and English language medical journals in the course of the preceding eight years. The analysis was based on six medical journals, which are comparable, as they all appear weekly and all cover a variety of medical subjects: the New England Journal of Medicine, JAMA, the British Medical Journal, Deutsche Medizinische Wochenschrift, Münchener Medizinische Wochenschrift, and Deutsches Ärzteblatt (for details of the methods, see the Box gif ppt).

The number and proportion of the references to German language journals have varied greatly in the course of the last eight years (Figure 1 gif ppt). The proportion fluctuated between 7% and 26% and increased in recent years. The reason for this is that the Deutsche Medizinische Wochenschrift and Deutsches Ärzteblatt have recently been cited more often. Thus the absolute figures for the numbers of citations of Deutsches Ärzteblatt for each year are as follows: 2001—12; 2002—14; 2003—13; 2004—7; 2005—8; 2006—14; 2007—21; 2008—25. Those citations very often referred to original articles.

It is striking that daily newspapers more often cite medical journals than do the weeklies (Figure 2 gif ppt). Some media give a constant high citation figure over the years (Süddeutsche Zeitung), or a constant low value (Spiegel, Zeit). On the other hand, there have been shifts in the Welt and the FAZ. Whereas the number of citations in the Welt increased by more than 5-fold, in recent years the FAZ has generally mentioned fewer medical journals than at the start of the decade. However, taken over the whole period, the FAZ most frequently reported from the six medical journals in the survey (n = 606). The numbers of citations for all six journals were similar in 2008 for the three daily newspapers, lying between 57 and 70.

The survey shows the large proportion of English language journals in all scientific references in the lay press—particularly because the selected journals represent only a part of the influential periodicals from the English speaking world. On the other hand, German language scientific sources also play an important role, which has even increased in recent years. This confirms that, on the one hand, there is a nucleus of important English journals which are decisive for the discussion of international medicine. However, on the other hand, journals in the native language are not only important for domestic specialists, but also for the broad domestic public (2).

This evaluation is purely quantitative, so that no conclusion is possible about the quality of the science journalism. If a lay press publication often cites medical journals, this does not automatically imply that it is particularly good. Structural factors may play a role. For example, the number of science pages in the FAZ has decreased. As weeklies, Spiegel and Zeit produce less of the current daily news—which is usually rich in citations—and a higher proportion of background reports. Conversely, there is no simple relationship between the frequency with which medical journals are mentioned and their scientific significance; the survey cannot be used to evaluate the medical journals. Other factors may be decisive, such as prestige, the number of articles or the themes covered by the journal. In fact, in the course of the survey, we had the impression that even such serious newspapers as those studied here did not always select their themes according to the criteria of medical relevance. However, this was not the subject of our analysis. A study of this issue has indeed been performed in Great Britain: Bartlett et al. examined which of the original studies published by the BMJ and The Lancet in 1999 and 2000 were mentioned in the serious Times and in the mass circulation Sun (3). Overall, the daily newspapers reported on 7% of all 1193 articles; observational studies were overrepresented and randomized controlled studies underrepresented. The journalists significantly more often selected negative news. Themes related to women's health, reproductive medicine and cancer occurred particularly often, while studies from outside Great Britain were usually neglected. The Times reported on three times as many articles from the The Lancet or BMJ than did the Sun. The results indicate that journalists do not only select themes on the basis of their importance, but that other considerations play a role in editorial decision making (4).

If a scientific article is mentioned in the lay press, does this influence the citations in medical journals? Articles from the New England Journal of Medicine which had been reported in the New York Times were in fact more often cited than comparable publications from the same journal which had not appeared in the lay press (5). However, as Phillips et al. showed in their 1991 study, this was not linked to the quality of the articles selected for reporting. When there was a strike in their newspaper for three months, the journalists had nevertheless to prepare an issue each day and reported on the publications in the New England Journal of Medicine—only their articles were not printed. Without the support of the New York Times, the number of citations for these scientific articles did not increase. It remains open as to whether there would be an effect of this sort in Germany. However, this does not seem to be very likely, as there is no newspaper which is read by researchers throughout Germany, as the New York Times is throughout the USA. Accordingly, to obtain the same effect in Germany, citation in several print media would be necessary. Our experience during this survey suggests that this is very rare with articles from German medical journals.

It is nevertheless encouraging that German language journals really are noticed by the most important editorial departments for science. The increasing recognition of Deutsches Ärzteblatt as a scientific organ is also an incentive to its editors to continue their work of improving the journal.

Translated from the original German by Rodney A. Yeates, M.A., Ph.D.. 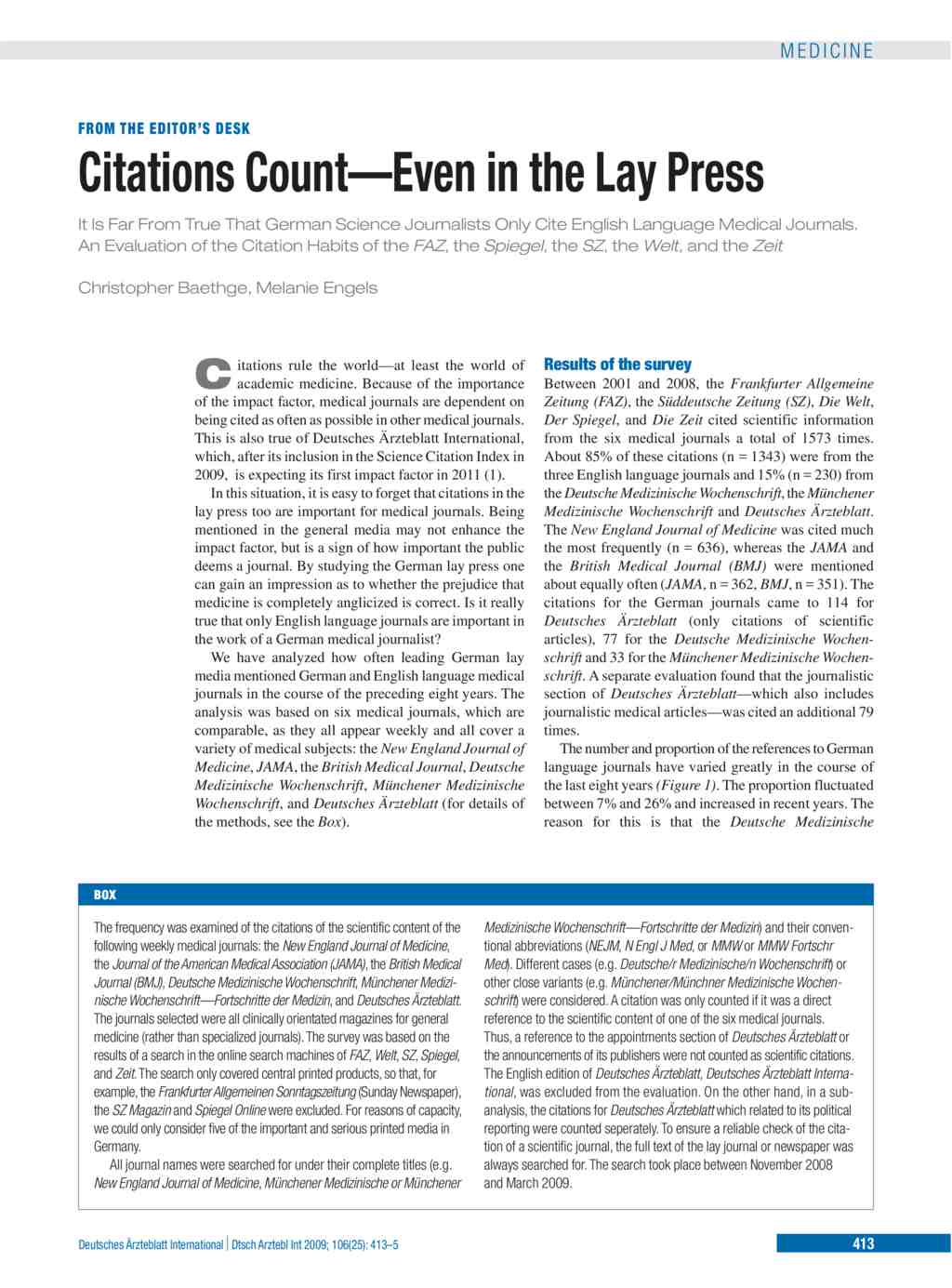