Epidemiological Insight Into the Question of Lifestyle Versus Addiction

Background: Much media attention currently focuses on demands from the organized medical profession in Germany for an altered legal framework regarding remuneration for smoking-cessation interventions. With this development, the question whether smoking is an autonomously chosen lifestyle or, alternatively, an addiction constituting a disease in its own right has once again come to the fore of public debate.
Methods: In a population-based study in the German state of Saarland, 10 000 persons aged 50 to 74 were questioned about their health-related behavior and medical history. The frequency of attempts to quit smoking, and of the motivation to do so, was analyzed in relation to the total number of smokers in the survey and was stratified with respect to existing illnesses whose cardiovascular risk potential is exacerbated by smoking.
Results: Among 1528 persons who were smokers at the beginning of the study, 76% (95% confidence interval [CI]: 73.7%–78.0%) reported having tried to quit at least once. Among smokers with existing high-risk conditions, this figure was higher, reaching 89% (CI: 83.1%–93.0%) in smokers with known cardiovascular disease. Only 11% of the smokers were content with their smoking behavior; 30% said they wanted to cut down, and 59% said they wanted to quit smoking entirely.
Conclusions: Most older smokers in Germany would like to quit smoking and have tried to do so repeatedly without success. In particular, high-risk patients with comorbidities, whose number will further increase as the population ages, are highly motivated to quit smoking and would derive major benefit from effective assistance with smoking cessation. The description of smoking as an autonomously chosen lifestyle appears cynical and deserves to be vigorously rejected.
Dtsch Arztebl Int 2009; 106(27): 451–5
DOI: 10.3238/arztebl.2009.0451
Key words: smoking, nicotine withdrawal, epidemiology, health-related behavior, comorbidity

That the situation in Germany with regard to tobacco consumption continues to be very unsatisfactory is not in dispute. In Germany alone, the mortality due to smoking is estimated at 100 000 to 140 000 deaths a year (1). The debate about a more determined fight against this significant health problem has been revived by the recent statement issued by the German Medical Association (BÄK, Bundes­ärzte­kammer) in response to recommendations of the Drug and Addiction Council of the German Federal Commissioner for Narcotic Drugs (Drogenbeauftragte der Bundesregierung) on 5 September 2008, in which the BÄK criticizes the strategic recommendations aimed at helping people to stop smoking as not going far enough. The demand to recognize as a treatable disease "tobacco addiction meeting the criteria given in ICD 10, F17" and to create "an appropriate legal framework for remuneration" for relevant interventions aroused strong media interest. The question of whether smoking is a self-determined "lifestyle" phenomenon or an addiction with medical status is back in the public arena (2). It is a fact that only 5% of smokers who try to quit on their own are still abstinent one year later (3). Clinical studies of various pharmaceutical therapies have shown a quitting success rate roughly double that achieved with placebo (4).

As a contribution to the current public debate, we here describe the frequency of attempts and desire to quit among older smokers, paying particular attention to smokers with preexisting cardiovascular and other relevant chronic diseases. As the general population ages, the prevalence of these diseases will increase. These diseases themselves carry a particularly poor prognosis, or a significantly increased cardiovascular risk, that is made even worse by smoking.

Methods
The analyses presented below are based on the baseline examination of the ESTHER study (Epidemiological Study on the Chances of Prevention, Early Recognition, and Optimized Treatment of Chronic Diseases in the Older Population). This prospectively designed study, including a detailed characterization of the study population, has already been extensively described elsewhere (5). For this study, carried out in the German Federal State of Saarland between 2000 and 2002, just under 10 000 participants were recruited in the setting of a health check by their general physician. The participants were aged 50 to 74 years at the start of the study. The data used in the study were collected by standardized questionnaires filled out by the participants at their baseline visit. Body weight and height were recorded as part of the health check in order to define overweight (body mass index > 25 to 30 kg/m²) and obesity (> 30 kg/m²).

Participants who said that they were current smokers were classified according to their answers about attempts to quit ("Have you ever attempted to give up smoking?" "No. / Yes, once. / Yes, more than once") and their desire to quit or reduce their smoking ("Would you like to give up smoking or to smoke less than you have been?" "No to both./ Yes, I'd like to smoke less, / Yes, I'd like to give up completely."). The percentages for each set of answers were first analyzed according to age and sex, and then in relation to whether or not the participants reported having a significant underlying disease. Percentages are given with 95% confidence intervals (95% CI); occasionally absolute numbers are given for clarity.

Figures 1 (gif ppt) and 2 (gif ppt) show the frequency of self-reported previous attempts to quit and the desire to quit in respondents with underlying cardiovascular disease or other diseases that considerably increase cardiovascular risk. The percentage of smokers who reported one or more previous attempts to give up rose notably among those who already had manifest cardiovascular (self-reported myocardial infarction or myocardial ischemia, angina pectoris) or cerebrovascular events (stroke, transient ischemic attack), and also among those with diabetes mellitus. For cardiovascular disease, the figure rose to 89% (95% CI: 83.1 to 93.0), compared to 76% (95% CI: 73.7 to 78.0) in the overall group. There were no relevant differences in desire to quit: for all underlying disease subgroups, only around 10% of smokers were content with their smoking behavior, and around 60% would have liked to give up (Figure 2).

Discussion
The results reported demonstrate that the large majority of older smokers in Germany do desire to give up smoking and report failed attempts—often more than one—to do so. Among heart patients in the wider sense this desire is even more prevalent.

The frequency of tobacco addiction and failed attempts to quit have been published for Germany (8, 9). The manifestation of a disease associated with smoking can act as an important stimulus—if only very briefly—to overcome the addiction (7). Despite this, there remains a sizable majority of persons with serious cardiovascular disease who fail in their attempts to give up smoking, and continue to smoke despite their own personal desire to stop this risk behavior. The number of such patients—high-risk but willing to quit—is going to rise, partly through demographic change, but also because of improved therapeutic options for, e.g., myocardial infarction (10). These are precisely the patients who would stand to gain most from treatment for their tobacco addiction (11, 12). That they are unable to give up smoking despite their concurrent disease makes a mockery of the assertion that smoking is primarily a lifestyle phenomenon—an assertion which anyway is contradicted by the rapidly increasing knowledge of genetic risk factors in smoking and tobacco dependency (13, 14).

A limitation of the study is the lack of data from instruments quantifying the tobacco dependency, e.g., the Fagerström test, or the ICD-10 diagnostic criteria. On the other hand, it was recently shown that smoking intensity, which was mostly high in the present study, is more strongly associated with likelihood of quitting than are more complicated measures of dependency such as the Fagerström test or the diagnostic criteria of the Diagnostic and Statistical Manual of Mental Disorders (DSM-IV) (15). Nevertheless the latter criteria, as an example, are fulfilled by the majority of people who regularly smoke a lot (16). It may also be assumed that the vast majority of heavy smokers in population-based studies have a high Fagerström score (17).

Our own study population was recruited exclusively from the Saarland population. Although this could be regarded as limiting the generalizability of the results to the German population as a whole, the authors presume that the relationships between smoking behavior, tobacco dependency and other diseases do not differ significantly in the various parts of Germany.

Recent results of epidemiological studies suggest that even simple structural measures could make a considerable contribution to promoting smoking cessation in the context of general medical care. For example, in a cluster-randomized study the "spontaneous" smoking cessation rates quadrupled when the costs of proven effective medical support for withdrawal (e.g., using nicotine replacement preparations or bupropion) were reimbursed (17). This measure was also shown to be remarkably cost-effective (18).

Welcome as a determined initiative to reinforce primary prevention of the addiction that is smoking may be, the perception that smoking—especially smoking continued during adulthood—is in most cases a freely chosen, autonomous act needs to be countered with equal determination. This is particularly clear in the case of patients at medical risk from other conditions. A responsible health policy has a duty to create a framework that will make it easier for addicted smokers to achieve the smoking reduction or cessation that they wish. In our opinion, representing smoking as chiefly a matter of lifestyle in order to evade this duty, and thus to escape the perceived related monetary consequences, is an act of cynicism.

Conflict of interest statement
Prof. Rothenbacher is a full-time employee of Novartis Pharma AG, Basel, Switzerland.
Dr. Breitling, Stegmaier, Dr. Raum, and Prof. Brenner declare that no conflict of interest exists according to the guidelines of the International Committee of Medical Journal Editors.

Translated from the original German by Kersti Wagstaff, MA 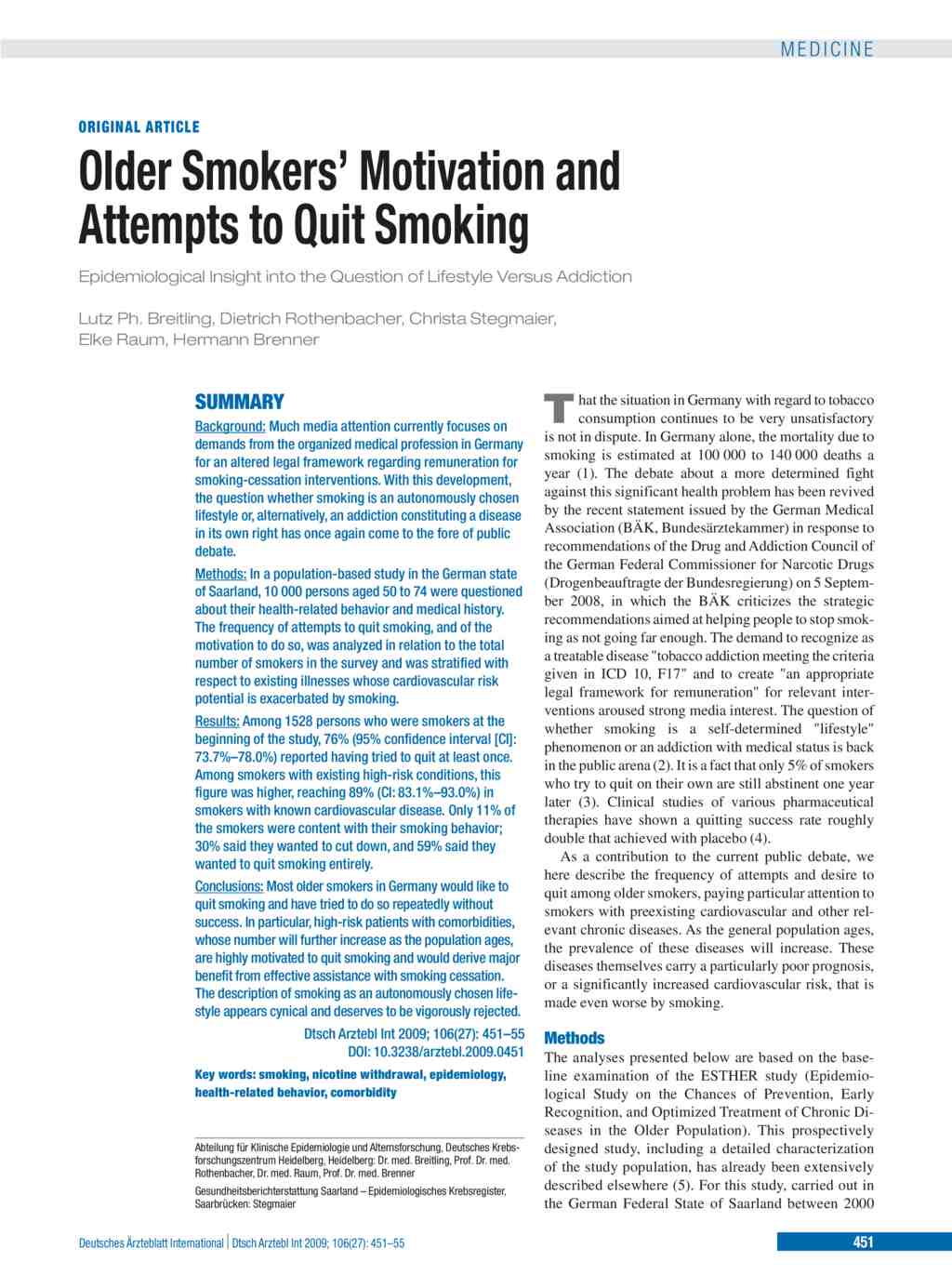