Part 6 of a Series on Evaluation of Scientific Publications

Background: Because of the rising number of scientific publications, it is important to have a means of jointly summarizing and assessing different studies on a single topic. Systematic literature reviews, meta-analyses of published data, and meta-analyses of individual data (pooled reanalyses) are now being published with increasing frequency. We here describe the essential features of these methods and discuss their strengths and weaknesses.
Methods: This article is based on a selective literature search. The different types of review and meta-analysis are described, the methods used in each are outlined so that they can be evaluated, and a checklist is given for the assessment of reviews and meta-analyses of scientific articles.
Results: Systematic literature reviews provide an overview of the state of research on a given topic and enable an assessment of the quality of individual studies. They also allow the results of different studies to be evaluated together when these are inconsistent. Meta-analyses additionally allow calculation of pooled estimates of an effect. The different types of review and meta-analysis are discussed with examples from the literature on one particular topic.
Conclusions: Systematic literature reviews and meta-analyses enable the research findings and treatment effects obtained in different individual studies to be summed up and evaluated.
Dtsch Arztebl Int 2009; 106(27): 456–63
DOI: 10.3238/arztebl.2009.0456
Key words: literature search, systematic review, meta-analysis, clinical research, epidemiology

Every year, there is a great increase in the number of scientific publications. For example, the literature database PubMed registered 361 000 new publications in 1987, with 448 000 in 1997 and 766 000 in 2007 (research in Medline, last updated in January 2009). These figures make it clear how increasingly difficult it is for physicians in private practice, clinicians and scientists to obtain comprehensive current information on any given medical topic. This is why it is necessary to summarize and critically analyze individual studies on the same theme.

Publications on individual studies may be summarized in various forms (1, 6–10):

These terms are often not clearly allocated in the literature. The aim of the present article is to describe and distinguish these forms and to allow the reader to perform a critical analysis of the results of individual studies and the quality of the systematic review or meta-analysis.

Methods
The various types of systematic reviews and meta-analyses of scientific articles will be defined and the procedure will be explained. A selective literature search was performed for this purpose.

A "review" is the qualitative summary of the results of individual studies (1). A distinction is made between narrative reviews and systematic reviews (Table 1 gif ppt). Narrative reviews (A) mostly provide a broad overview of a specific topic (1, 11). They are therefore a good way of rapidly obtaining current information on research on a given topic. However, the articles to be included are selected subjectively and unsystematically (1, 11). For some time, the Deutsches Ärzteblatt has been using the term "selective literature review" for this type of review. Narrative reviews will not be further discussed in this article.

In contrast, systematic review articles (B) claim that, if possible, they consider all published studies on a specific theme—after the application of previously defined inclusion and exclusion criteria (11). The aim is to extract relevant information systematically from the publications. What is important is to analyze the methodological quality of the included publications and to investigate the reasons for any differences between the results in the different studies. The results of each study are presented and analyzed according to defined criteria, such as study design and mode of recruitment.

The same applies to the meta-analysis of published data (C). In addition, the results are quantitatively summarized using statistical methods and pooled effect estimates (Glossary gif ppt) are calculated (1).

A pooled reanalysis (D) is a quantitative compilation of original data (Glossary) from individual studies for combined analysis (1). The authors of each study included in the analysis then provide individual data (Glossary). These are then compiled in a combined database and analyzed according to standard criteria fixed in advance. This form of pooled reanalysis is also referred to as "meta-analysis of individual data".

It is essential for all forms of summary—except the narrative review—that they should include a prospectively prepared study protocol, with descriptions of the questions to be answered, the hypotheses, the inclusion and exclusion criteria, the selection of studies, and, where applicable, the combination of the data and the recoding of the individual data (only for pooled reanalysis).

Types of study summaries
The procedure for the summary of the studies will now be presented (modified from [7, 10, 12, 13]). This is intended to enable the reader to assess whether a given summary fulfils specific criteria (Box gif ppt).

3. Were precautions taken to find all studies performed with reference to the specific question to be answered?
An extensive literature search must be performed for studies on the topic. If at all possible, this should be in several literature databases. To avoid bias, all relevant articles should be considered, whatever their language. Moreover, a search should be performed in the literature lists of the articles found and for unpublished studies in congress volumes, as well as with search machines on the Internet.

For a pooled reanalysis (D), authors of all identified studies must be contacted and requested to provide individual data. The individual data must then be coded according to standard specifications, compiled in a combined database and analyzed.

5. Was a descriptive analysis of the data performed?
In all forms of summary, it is usual for the most important characteristics of the individual studies to be presented in overview tables. Table 2 (gif ppt) shows an example of such a table, taken from a meta-analysis with published data (C) (14). This helps to make the differences between the studies clear with respect to the data examined.

Results
The method section describes the individual steps for the extraction of the relevant points which must be considered in the systematic summary of scientific articles (Box). This checklist can also be used to analyze the quality of systematic review articles or meta-analysis.

Publications on the association between the administration of oral contraceptives and the development of cervical carcinoma were used as examples of the performance of a systematic literature review (B), a meta-analysis of published data (C), and a pooled reanalysis (D). This association has been scientifically studied for a long period.

In 1996, La Vecchia et al. published a systematic review article (B) on this topic, including six studies (23). Their overview table contained a variety of information on the individual studies. No pooled effect estimate was calculated.

In 2003, Smith et al. (14) presented a meta-analysis of published data (C) of 28 studies on the same topic. The included studies were first summarized in a descriptive overview, as is common in systematic review articles (Table 2). This table shows that the study methods were heterogenous (Glossary); for example, HPV was detected in different ways (Table 2). The heterogeneity was also formally investigated with statistical tests and various subgroup analyses were performed. In contrast to the systematic review article (B) of LaVecchia et al., pooled effect estimates were calculated with the published data (Figure 1). The effect estimates for the individual studies and the pooled effect estimates with their confidence intervals (glossary) were presented as a forest plot (Figure 1).

In 2007, a pooled reanalysis (D) was published for 24 studies on the same topic for which the original data were available (24). In contrast to the meta-analysis of published data, the pooled effect estimates were calculated from the original data and only the combined results were presented (Table 3). This kind of analysis is only possible in a pooled reanalysis, as the original data with precise information on all parameters for each participant are then available. Nevertheless, here too it is necessary to consider that the individual data (Glossary) are derived from different studies.

Discussion
Systematic review articles (B) can provide a comprehensive overview of the current state of research (1). They are also necessary for the development of S2 and S3 guidelines for formal evidence-based research (25). Meta-analyses of published data (C) are performed to calculate additional pooled effect estimates from the individual studies (1). Like systematic review articles, they are feasible whether the authors of the original articles are prepared to cooperate or not.

In a pooled reanalysis (D), potential confounders and risk factors can be more easily considered (7), as they are usually only published in an aggregated form. With the individual data, the outcome parameters, risk factors, and confounders used in the analysis can be categorized in a standard manner and properly incorporated in the analysis. Individual data can be removed in accordance with the prospective specifications in the study protocol, without it being necessary to exclude the whole study. The disadvantages of pooled reanalysis are that it demands a great deal of time and money and that it is dependent on the willingness of the authors of the individual studies to cooperate. If not all authors send their individual data, this may result in biased results.

The level of evidence of the type of summary increases from the systematic review to the meta-analysis of published data to the pooled reanalysis. It is important that all three forms of summary should be performed with high quality. 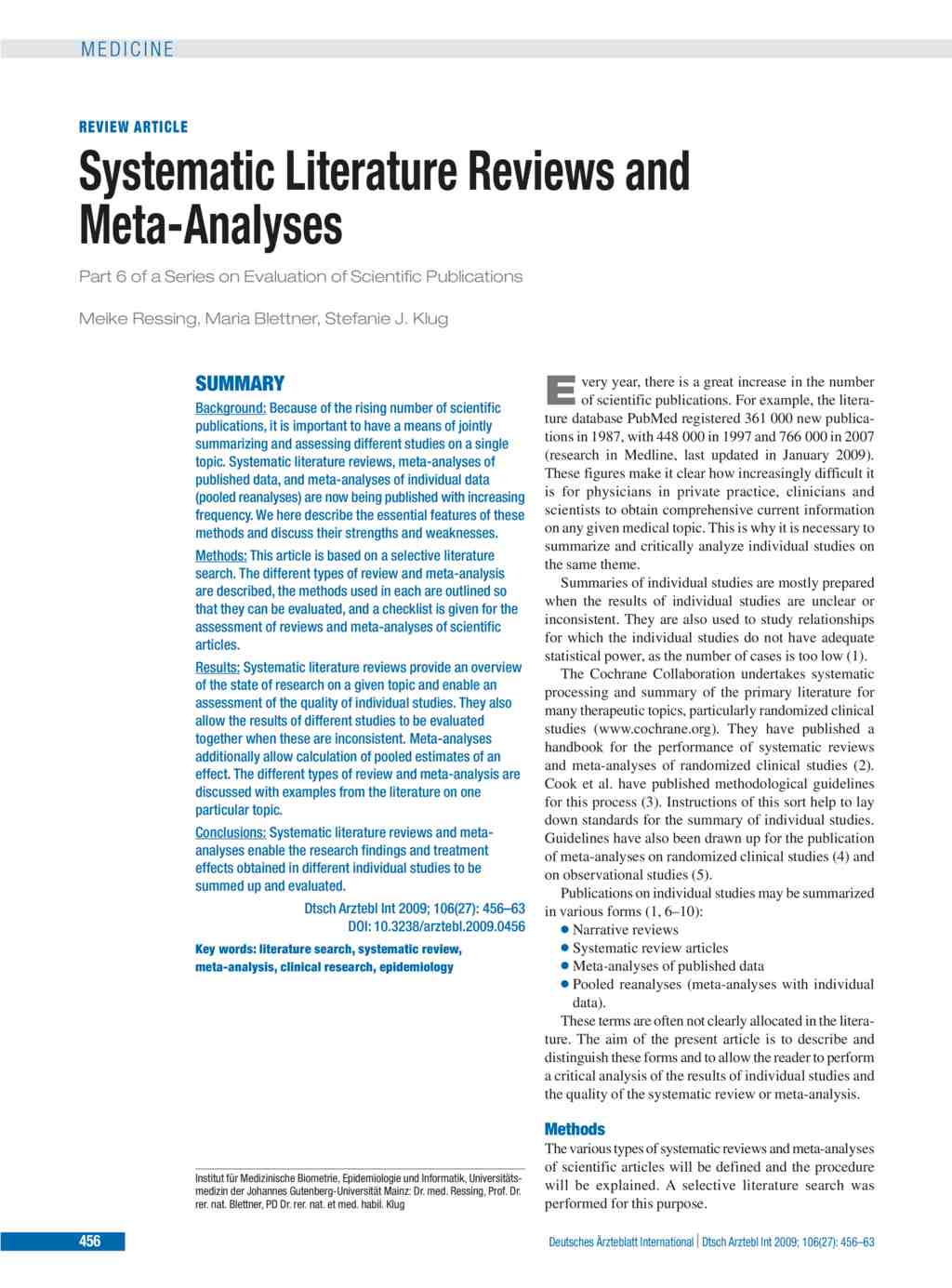