Dtsch Arztebl Int 2009; 106(28-29): 469-70. DOI: 10.3238/arztebl.2009.0469
This editorial is in reference to the article by Strüber et al. entitled "The Current Status of Heart Transplantation and the Development of 'Artificial Heart Systems' " in this issue of Deutsches Ärzteblatt International.

Heart transplantation (HTx) and the implantation of ventricular assist devices (VAD) are effective surgical treatment options for patients with end-stage heart failure. Nonetheless, for various reasons, they are usually among the last treatments to be used among all treatments that are available for heart failure (medications, implantable defibrillation systems, cardiac resynchronization therapy, and alternative surgical methods) (1).

The article by Strüber et al. appearing in this issue of the Deutsches Ärzteblatt International (2) provides an important and comprehensive overview of the current potential and limitations of HTx and VAD. Major developments in the last five to ten years have led to significant changes in the indications for surgery, as well as in the optimal time point for referral to a specialized center.

HTx remains the gold standard of treatment for end-stage heart failure (NYHA III–IV). The main disadvantage of transplantation in Germany is the long waiting period for a transplant. As Strüber et al. discuss in their article (2), the number of patients waiting for a transplant has risen steadily since 2002, while, at the same time, the number of transplantations actually performed in Germany per year has steadily fallen. Thus, in 2008, 815 patients were awaiting transplants, but only 382 transplantation procedures were performed. There is no good reason why only 382 hearts should be available for transplantation each year in a country with 82 million inhabitants. Even this low number was only attained through the loosening of criteria for acceptable donors and the toleration of long transport times.

As the life expectancy of the population rises, we can expect heart failure to become an even more common problem, particularly among the elderly. Thus, the need for organs will only rise in future, and we must do all we can to encourage potential donors to donate. One-minute commercials on prime-time television and newspaper advertising campaigns are certainly important ways of doing this.

Ventricular assist devices are increasingly being used to enable patients at risk of death on the waiting list to survive long enough to obtain a transplant. In 2008, in Freiburg alone, 24 heart and combined heart-and-lung transplantations were performed, while, in the same year, 38 VADs were implanted. 25% of the 24 HTx patients had the support of a VAD. More than 60% of the transplanted hearts went to patients on the highly urgent (HU) or urgent (U) list. More than half of the patients had undergone cardiac surgery previously.

A glance at the criteria required to put a patient on the HU waiting list quickly reveals that waiting times of up to eight weeks, and even longer, are simply too long for many of these patients. VAD implantation as a bridge to transplantation is, for some, their only chance of survival. It is important, therefore, to implant a VAD in timely fashion to enable survival before the impending multi-organ failure takes place.

Ultimately, however, the use of VADs as a bridge to transplantation cannot solve the problem of organ scarcity. Furthermore, HTx is contraindicated in a rapidly increasing number of heart-failure patients, because of age over 75 years, a history of cancer, fixed pulmonary hypertension, or other reasons. HTx is thus a therapeutic option only for a fraction of patients in heart failure.

VADs are a steadily improving form of treatment, not just for temporary implantation as a bridge to transplantation, but also for permanent implantation as a bridge to recovery. Even in patients with so-called fixed pulmonary hypertension (>4 on the Wood scale), the implantation of a VAD can be followed by a decline of pulmonary resistance within 3 to 9 months (4). Thus, already today, many centers for the treatment of heart failure perform more VAD implantations than heart transplantations. It remains unclear, however, what "permanent" really means in terms of years. The two patients sharing the world record—>7.5 years—for survival with a VAD (of the Jarvik 2000 type) were treated at Oxford (England) and in Freiburg (Germany).

The quality of life is not the same after VAD implantation as it is after HTx, as Strüber et al. point out (2): the emotional stress after VAD implantation is greater. Nonetheless, the possibilities for surgical treatment have now reached a gratifyingly high standard that enables many patients in heart failure to be treated successfully. 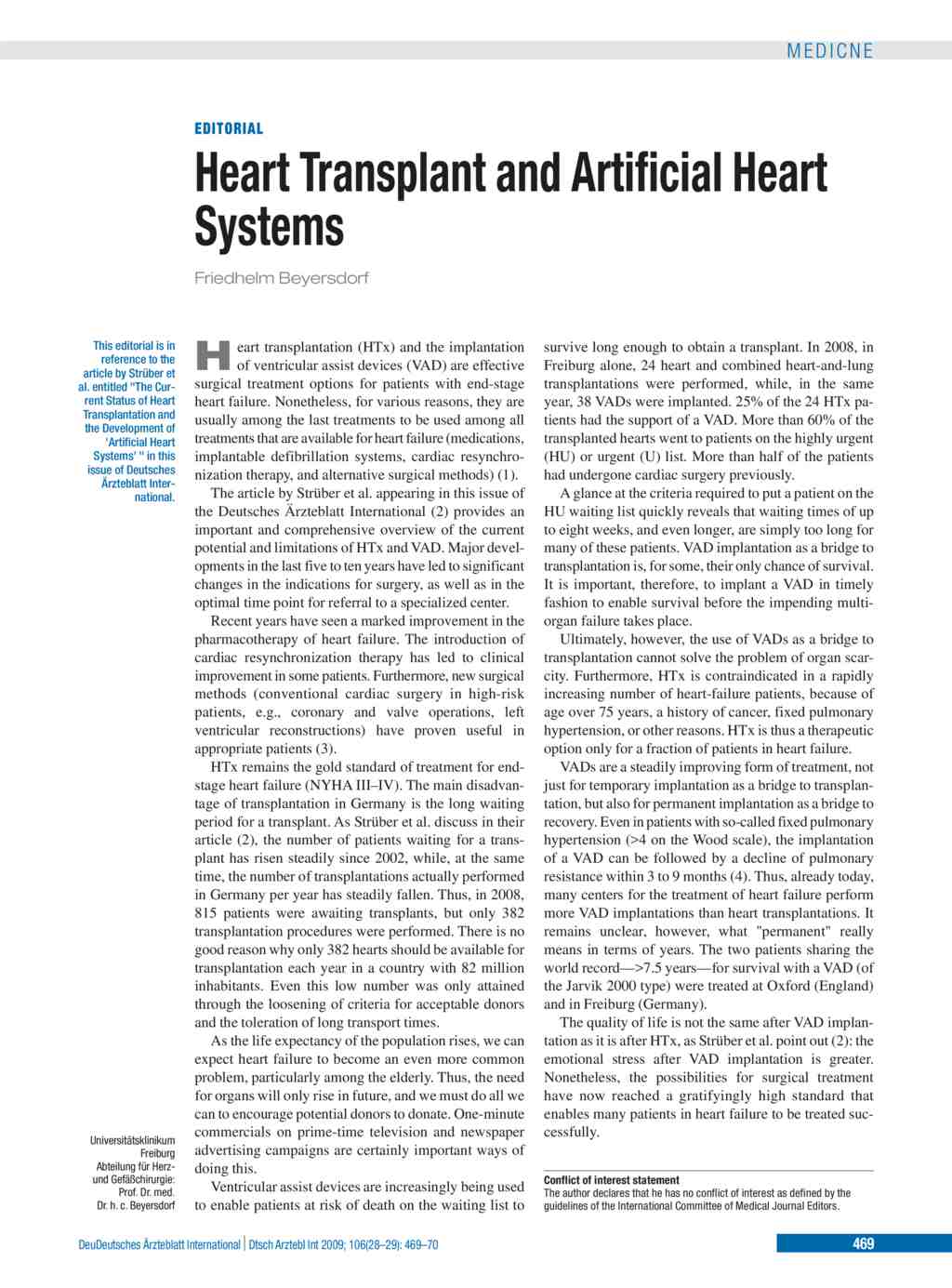