Should a newly diagnosed schwannoma of the vestibular nerve be observed, surgically removed, or irradiated? This question and others about this type of tumor, also known as acoustic neuroma, were of interest to the more than 600 participants at the European Skull Base Congress, which took place in Rotterdam in April 2009.

Sven-Eric Stangerup of Gentofte University, Copenhagen, reported on studies of the incidence of these tumors and their natural course without treatment. The increased incidence in Denmark over the last 26 years, leading to the current figure of about 1 per 100 000 persons per year, can be accounted for by the more widespread use of magnetic resonance imaging (MRI). Interestingly, however, the mean age of affected patients at the time of diagnosis has not become any lower. A proposed explanation for this observation was that MRI is being increasingly performed in the elderly as well.

By incorporating data from practically all affected patients in Denmark in a single database, Stangerup and his team were able to show that, after an average of three and a half years of observation, tumor growth was seen in 17% of small, intracanalicular schwannomas and in 29% of the tumors that extended into the cerebellopontine angle. After a longer period of observation lasting five years, 45% of the tumors that were originally confined to the internal auditory canal were found to have grown.

Microsurgical and radiosurgical treatment
If a strategy of expectant ("wait-and-scan") management is employed for 10 years, 45% of the patients with small, intrameatal tumors lose functional hearing on the affected side; this percentage is considerably higher than the corresponding figure for patients actively treated with hearing-preserving microsurgery or radiosurgery. The Danish group, therefore, recommended that not just larger tumors, but small ones as well, should be treated whenever tumor growth has been demonstrated and hearing-preserving treatment has a realistic chance of success.

Nearly all patients in Norway with acoustic neuromas are treated at Haukeland University in Bergen. The physicians and scientists of the Haukeland University research group primarily addressed the issue of the quality of life of treated and untreated patients. Per Møller described the relatively low risk of treating both small and medium-sized tumors (<25 mm) with either microsurgery or radiosurgery. He reported that radiosurgery yielded, statistically, a significantly better outcome than microsurgery with respect to the functional integrity of the facial nerve, hearing preservation, and the quality of life after treatment.

All of the studies of the Norwegian group pointed to vertigo as the single most important factor affecting patients' quality of life, whether the patients underwent treatment or not. Facial nerve function and the patient's sex also affected the subjective quality of life to a statistically significant extent. After two years of post-radiosurgical follow-up, one of 68 patients whose tumors had been irradiated with the Gamma Knife required surgery because the tumor had continued to grow.

As summarized by Møller, radiosurgery is offered in Bergen as the treatment of choice for vestibular nerve schwannomas measuring up to 25 mm in diameter. Microsurgery is, however, taken into consideration as primary treatment for a subgroup of patients with intractable vertigo.

Similarly, Jeremy Rowe of the National Centre for Stereotactic Radiosurgery in Sheffield reported on an increasingly conservative approach to the treatment of vestibular nerve schwannomas in the United Kingdom. Microsurgeons there will now more frequently leave a part of the tumor in place and then either observe it further with MRI or else perform secondary radiosurgical treatment at once.

The goal of precise, stereotactic irradiation (with the Gamma Knife or a linear accelerator) is to stop the growth of the tumor. This was apparently achieved in over 95% of cases, with the current length of follow-up extending to several years. Because the rate of hearing preservation is high (75%) and side effects involving other cranial nerves are rare, the treated patients achieve a good quality of life, as assessed by the SF-36.

Marcos Tatagiba of the University Department of Neurosurgery in Tübingen, Germany, presented the cases of patients in whom large acoustic neuromas were microsurgically resected in their entirety without any permanent impairment of facial or auditory nerve function. Most patients' quality of life was limited by the tumor itself, rather than its treatment. Scientific follow-up studies and questionnaires concerning the outcome of the highly labor-intensive microsurgical method, which includes intraoperative monitoring, showed that surgery yielded a desirable result in many cases.

The decision which method of treatment to use certainly also depends on the experience and outcomes of each individual treating institution. If the functional results of radiosurgery and microsurgery are found to be comparably good for a subgroup of vestibular schwannomas, then one should consider whether irradiation ought to be recommended at all to a patient in this subgroup.

Discussion
Kees Graamans of the University of Nijmegen, the Netherlands, along with the author of this conference report, Steffen Rosahl of the Helios Klinikum in Erfurt, Germany, presented some problematical cases from their own patient bases and took an electronic poll of the conference participants to see how they would have chosen to manage them. Out of the vigorous discussion that followed, there emerged a relatively broad consensus that the modern management of these special tumors should meet three essential requirements:

1. A treating institution that chooses to take on the challenge of treating vestibular nerve schwannomas should be able to provide all of the various options for treatment or observation, so that patients can be comprehensively informed about these options.

3. A detailed accounting of all cases and an honest analysis of the results of all three management strategies are indispensably required. 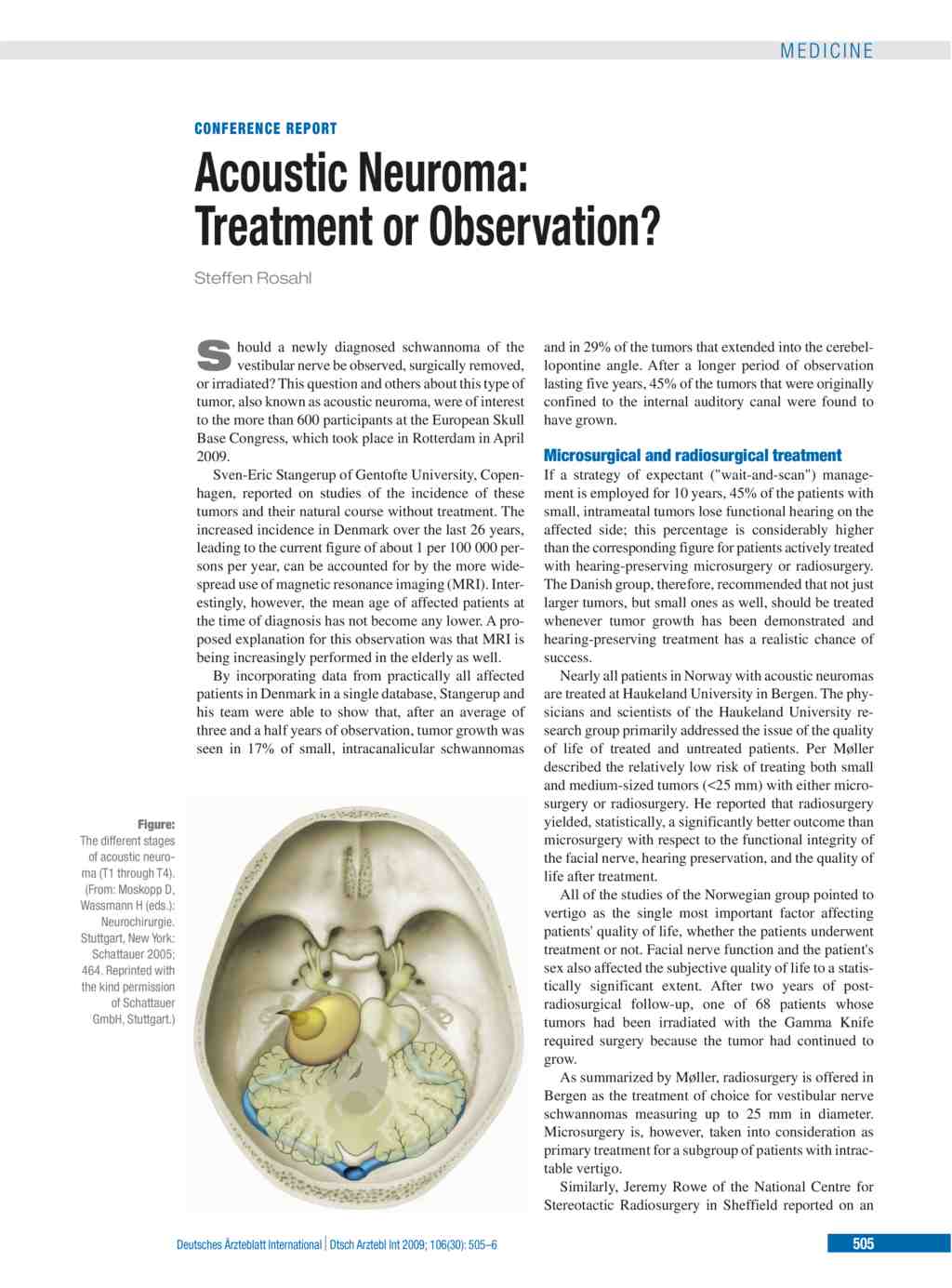