It is of course correct that not 100% of all pT1a renal cancers (of less than 4 cm diameter) can be operated on in an organ preserving manner. For the reasons cited, a resection of the tumor is not possible without losing what remains of the kidney in rare cases. All patients are therefore informed before undertaking explorative surgery on the kidney (while trying to preserve the kidney). The decision is made during the operation. However, organ preserving surgery should at least always be attempted. Some studies have reported raised rates of comorbidities and deaths in patients with imminent renal failure (1).

In patients who have to continue taking thrombocyte aggregation inhibitors after stenting (as a rule, for a period of 6 months), I would—for the reasons given above—rather wait for this acute phase than tolerate nephrectomy. Available data about the natural behavior of renal tumors have shown a slow growth of a maximum 1 cm/year and a probability of metastases of only 4% for tumors of less than 4 cm diameter (2).

The EAU guidelines indeed have a low evidence level. Prospective, randomized, multicenter studies are needed that compare the long term survival and follow up of patients after nephrectomy versus partial renal resection. In my opinion, however, not offering organ preserving surgery in identical conditions is ethically not acceptable. The quality of the available data is just too good, even though they are retrospective.

If an indication has to be defined, obligatory patient information has to include the possibility of a nephrectomy and resultant need for dialysis. However, organ preservation should always be aspired to, by all available means. Pertinent data were presented by ourselves at the 2006 annual congress of the German Society of Urology: after imperative partial renal resection, patients have notably higher survival rates than general patients requiring dialysis (according to the DOPPS database [3]). And quality of life was not even compared in this context!

The option for treating parenchymal defects with bioadhesives that activate clotting is an important additional point. In our hospital this procedure is used in some cases. However, as a rule, purse string sutures are additionally applied and seem indispensable. Partial renal resection without clamping the hilar vessels and thus causing harmful ischemia is possible in some 20% of cases and thus an important addition.

The discussion shows that urologists have discussions with each other; it therefore follows that a certain amount of overtreatment of renal tumors in the specialty is occurring, and that the unknown number of nephrectomies in small renal tumors is probably too high. Patients would therefore certainly benefit appreciably more from partial renal resection performed at a center, as current data show that the disease course after partial renal resection is no less favorable than otherwise. Further, fewer comorbidities seem to occur after partial renal resection, and the death rate seems lower than after nephrectomy (4).
DOI: 10.3238/arztebl.2009.0564 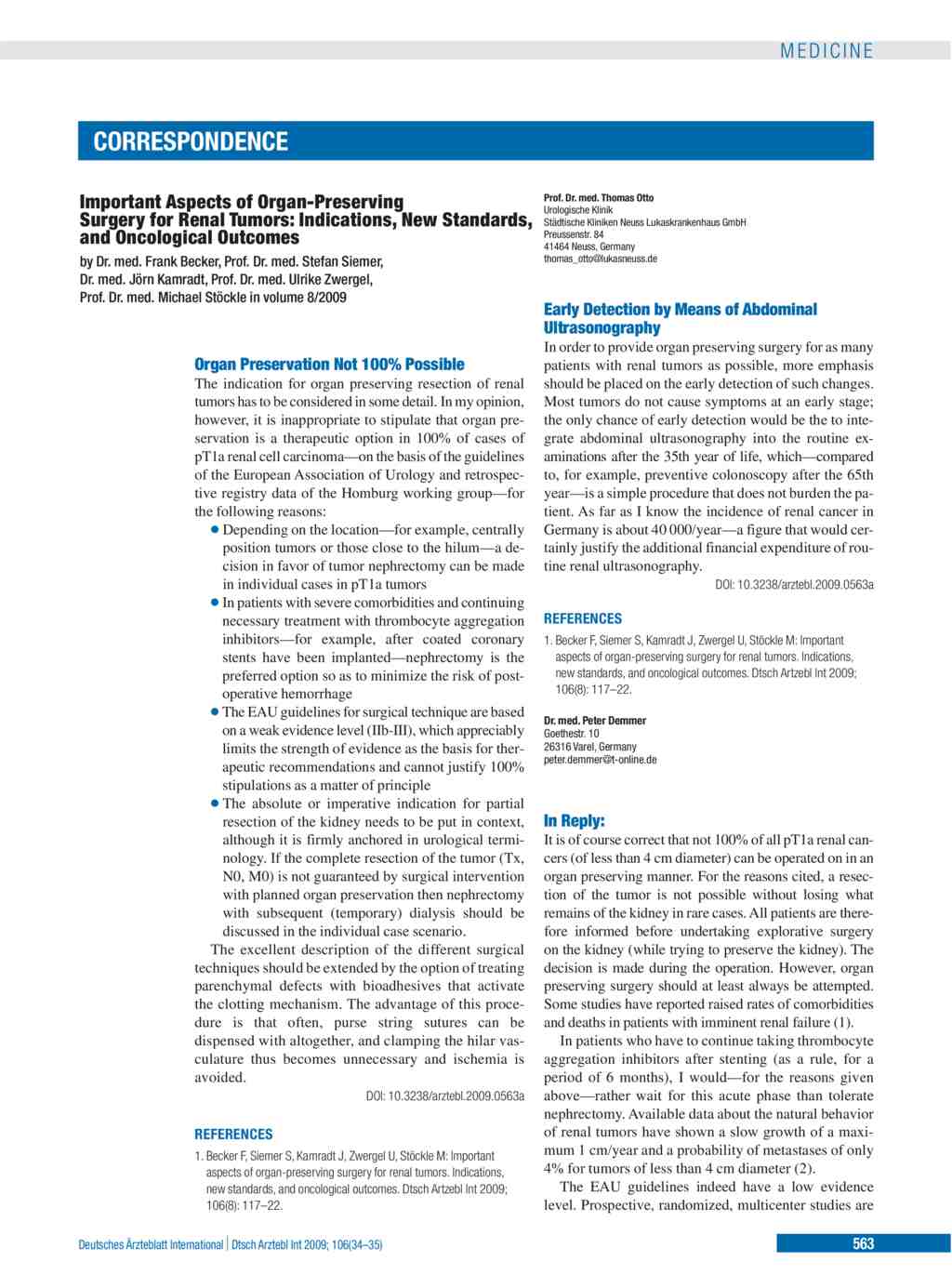