Dangerous Errors in the Diagnosis and Treatment of Bony Tuberculosis

Background: In rare diseases such as tuberculosis of bone, the diagnosis may be missed despite clear and overt clinical manifestations if the findings are misinterpreted and the causative organism escapes detection.
Case presentation and further clinical course: A 30-year-old man who had been successfully treated for acute lymphatic T-cell leukemia (T-ALL) 18 years earlier developed multiple osteolytic lesions with compression fractures in the cervical spine, accompanied by an elevated serum concentration of C-reactive protein (CRP). One of the foci was biopsied, and the histological findings were interpreted as showing recurrent T-ALL. Induction chemotherapy was performed; this was followed by progressive osteolysis, abscesses, and visual disturbances due to an intracerebral infectious granuloma. High-dose chemotherapy was then planned, but the patient refused to undergo it. Further biopsies of the cranium and iliac crest revealed sterile abscesses. The newly proposed diagnosis was chronic, recurrent multilocular osteomyelitis (CRMO), for which treatment was begun with prednisolone and indomethacin. A fall in the CRP concentration and transient symptomatic improvement resulted. Two months later, however, the patient developed an intra-abdominal abscess. After this was surgically drained, mycobacteria were demonstrated for the first time, finally enabling a correct diagnosis. The patient underwent tuberculostatic treatment with 4 different drugs for 2 years. His CRP became normal, and all of the abscesses and other symptoms resolved completely.
Conclusions: A T-ALL recurrence confined to bone would have been an extremely rare event, and this putative diagnosis should have been critically questioned. The high-dose chemotherapy that was proposed would have been life-threatening for a patient with florid tuberculosis. Inflammatory responses in bone can mimic the histological appearance of CRMO. The staining method can be problematic for the microbiological demonstration of tuberculosis. In this case, the causative organism was finally demonstrated with an auramine stain and fluorescence microscopy.
Key words: tuberculosis of bone, diagnosis, misdiagnosis, laboratory diagnosis, treatment error

Rare diseases are initially rarely diagnosed correctly. In a 30-year-old patient, several rare diseases were diagnosed and treated over a period of 6 months. Each of these diseases seemed plausible at the time of diagnosis. If the patient had not had the courage to refuse a therapeutic option that could have been life threatening for him—which eventually led to the correct diagnosis being made—he would not be alive today.

The following case report demonstrates a series of unusual errors that occurred on the way to a diagnosis of tuberculosis of the bone.

Case presentation
As a child the patient had successfully received treatment for acute lymphatic leukemia, in the form of polychemotherapy and irradiation of the skull.

18 years later, in July 2000, the patient experienced severe pain of the lumbar spine. By September 2000, he had pain in the cervical spine and the range of movement of his head was restricted. In October 2000, he had multiple occurrences of osteolysis (spine, pelvis, and ribs). A computed tomography–guided biopsy of the osteolytic lesions on the right iliac crest (Figure 1 jpg ppt) was taken in a hematology-oncology center, which gave rise to the suspicion of a differentiated T-cell lymphoma, consistent with acute lymphatic leukemia (ALL).

Lymph nodes, bone marrow, and cerebrospinal fluid (CSF) were without pathological findings; C-reactive protein was notably raised. The result of a tine test was positive.

A diagnosis was made of acute lymphatic leukemia with bone involvement, and induction chemotherapy was started according to therapeutic protocol ALL 06/99, which included intrathecal methotrexate. The patients’ symptoms increased, however, and the osteolytic lesions progressed, affecting the perivertebral soft tissues (Figure 2 jpg ppt).

The patient rejected an offer of high-dose chemotherapy with allogeneic bone marrow transplantation.

In February 2001, he was admitted to the hospital for integrated oncology in Nidda/Bad Salzhausen. He was experiencing severe pain in his lumbar spine, pelvis, and cervical spine and was physically extremely weak. He was apyrexial and no lymphomas were found, but abscesses had developed at the puncture site on the patient’s right iliac crest and forehead. Abdominal sonography showed hepatosplenomegaly and a pleural effusion on the left. Radiological investigations showed multiple osteolytic lesions with soft tissue involvement.

Laboratory tests showed raised leukocytes (up to 12 000), C-reactive protein of 145–220 mg/L (<10), and beta-2 microglobulin of 2.91 mg/L (<2.4). The pleural specimen obtained by puncture was cytologically and microbiologically normal. Specimens taken from the abscesses were sterile; no acid-fast bacilli were found microscopically (Ziehl-Neelsen stain).

Because of the clinical picture and the positive tine test, tuberculosis (TB) was suspected. Consultation with the pathologist who had conducted the initial biopsy confirmed that TB as a differential diagnosis to a differentiated T-cell lymphoma could not be ruled out. The patient received a short course of triple therapy with Rifater (rifampicin, isoniazid, and pyrazinamide). Because of the patient’s unchanged high CRP values, progressing osteolytic lesions, a compression fracture of the second cervical vertebra (Figure 4 jpg ppt), and increasing pain, doubt was cast on the correctness of the diagnosis in the absence of acid fast bacilli, and tuberculostatic treatment was stopped.

Instead, a diagnosis of chronic recurrent multifocal osteomyelitis (CRMO) was made, and treatment with high dose prednisolone (100 mg) and indomethacin (3×50 mg) was started in April 2001. The patient’s symptoms improved noticeably; the inflammatory markers fell to almost the normal range; a new pus focus on the iliac crest receded completely, and the bone pain disappeared. The patient was discharged relatively free of symptoms.

However, later attempts to reduce the prednisolone dosage always led to increased symptoms.

In July 2001, the patient complained of cramping pain in the right abdomen. Computed tomography (CT) showed an extensive abscess reaching from the liver into the lesser pelvis (Figure 5 jpg ppt). After surgical treatment, mycobacteria were detected for the first time (auramine phenol stain and fluorescence microscopy). Cultures were grown.

Results and disease course
A diagnosis of TB affecting the bones and soft tissues was made and the patient again received Rifater while the prednisolone was gradually stepped down.

In July 2001, the patient experienced increased bone pain, and an abscess formed in the area of an earlier osteolytic lesion on the skullcap to the right above the forehead (Figure 6 jpg ppt). A swab contained acid fast bacilli, as shown under the fluorescence microscope after auramine phenol staining, but not after Ziehl-Neelsen staining.

The results of the culture showed the mycobacterial species Mycobacterium avium-intracellulare.

Enhanced tuberculostatic therapy with a quadruple combination of rifampicin, clarithromycin, isoniazid, and ethambutol was initiated.

However, further course was complicated.

In December 2001 the patient developed paresis of the dorsal flexors of the right foot with pronounced pain, as well as a migrating abscess in the psoas muscle on the right (Figure 7 jpg ppt). The dosage of ethambutol was increased. This therapeutic approach fi-nally provided the desired results: All abscesses completely receded, CRP normalized, and the osteolytic lesions underwent sclerosis in partially sintered vertebrae. Tuberculostatic therapy was ended after 2 years. Today, 6 years later, the patient remains free of symptoms and his CRP is within the normal range.

Discussion
No case of ALL that exclusively affected the bones has been described in the international literature. The notably raised CRP value was not sufficiently taken into consideration in the differential diagnostic tests.

The fact that the patient was referred to a hematology department possibly facilitated the misdiagnosis of ALL: After he had been admitted with osteolytic lesions, all findings were interpreted—even by the pathologist—as a hematological condition, because of the patient’s previous medical history. ALL recurring after 18 years and manifesting exclusively as bone pathology is extremely unusual, however, and no cases have been described in the international literature. The positive tine test was misinterpreted as a reaction to vaccination. In retrospect, defining an indication for high-dose chemotherapy was a mistake. It is quite possible that the patient would have died as a result, had he not refused this treatment.

The subsequent clinical diagnosis of “tuberculosis of the bone” was correct, but not sufficiently proved (clinical presentation only, tine test positive, CRP high, but no confirmed causative organism). Because the species of mycobacterium remained unknown no optimal medication was possible. Years of tuberculostatic therapy without a confirmed diagnosis and known causative strain did not seem justifiable and would probably have remained unsuccessful as the causative strain remained elusive. A microbiological diagnosis was probably missed because of the staining method, because the initial acridine orange stain did not show up any acid fast bacilli. These were successfully detected only much later, in another laboratory, on fluorescence microscopy after auramine phenol staining. If the clinical presentation is obvious, more aggressive diagnostic tests with more specimens, different staining methods, and cultures should be done, and should have been in this patient.

Instead, a misdiagnosis of chronic recurrent multifocal osteomyelitis (CRMO) was made. This seemed initially plausible in a scenario of seemingly sterile osteomyelitis. However, extensive soft tissue and tissue abscesses are not typical of CRMO. The rapid therapeutic success of anti-inflammatory treatment with high-dose corticosteroids and indomethacin seemed to confirm the misdiagnosis of CRMO, but in reality it masked the tuberculous inflammatory processes only temporarily. It is possible that the use of steroids further activated the tuberculosis (abdominal abscess), which then led to the diagnosis.

The diagnosis of tuberculosis of the bone, accompanied by soft tissue abscesses, was finally correct and was confirmed by microbiological detection of acid fast bacilli. This diagnosis might possibly have been made earlier if the microbiological tests had included auramine phenol staining with fluorescence microscopy, although this method cannot prove or exclude TB either. The standard Ziehl-Neelsen stain did not show up any mycobacteria.

The correct choice of medication became possible only after cultures had been grown and the causative organism had been identified (Mycobacterium avium-intracellulare).

Over time it transpired that even if the causative strain is known, it is possible for the patient to deteriorate or relapse, necessitating dosage adjustment. A complete and lasting cure was achieved only after 2 years of treatment.

Conclusion
Tuberculosis of the bone is a rare disease. If no causative organism is confirmed to enable a diagnosis, unusual misdiagnoses are possible. Incorrect therapeutic decisions—such as the planned, high-dose chemotherapy planned in this case—can be life threatening or delay the diagnosis.

Without the prior history of childhood leukemia the pathology may not have been interpreted as a recurrence of T-ALL. Recurrent T-ALL affecting exclusively the bones has not been described in the literature and should have been approached with a higher index of suspicion.

An excellent clinical and laboratory chemical response to treatment can even support a misdiagnosis, such as happened here for CRMO. Incorrect treatment resulted in further disease progression, with the tuberculosis affecting the soft tissues (abdominal abscesses).

A correct diagnosis became possible only after the causative organism had been confirmed correctly, thus facilitating complete cure. In this case, the problem in the diagnostic confirmation of mycobacteria was the staining method. In several, standard Ziehl-Neelsen stains, no acid fast bacilli were found; only fluorescence microscopy with auramine phenol staining was successful in achieving this. If tuberculosis is strongly suspected, different staining methods and cultures should be used to enable confirmation of a causative strain. 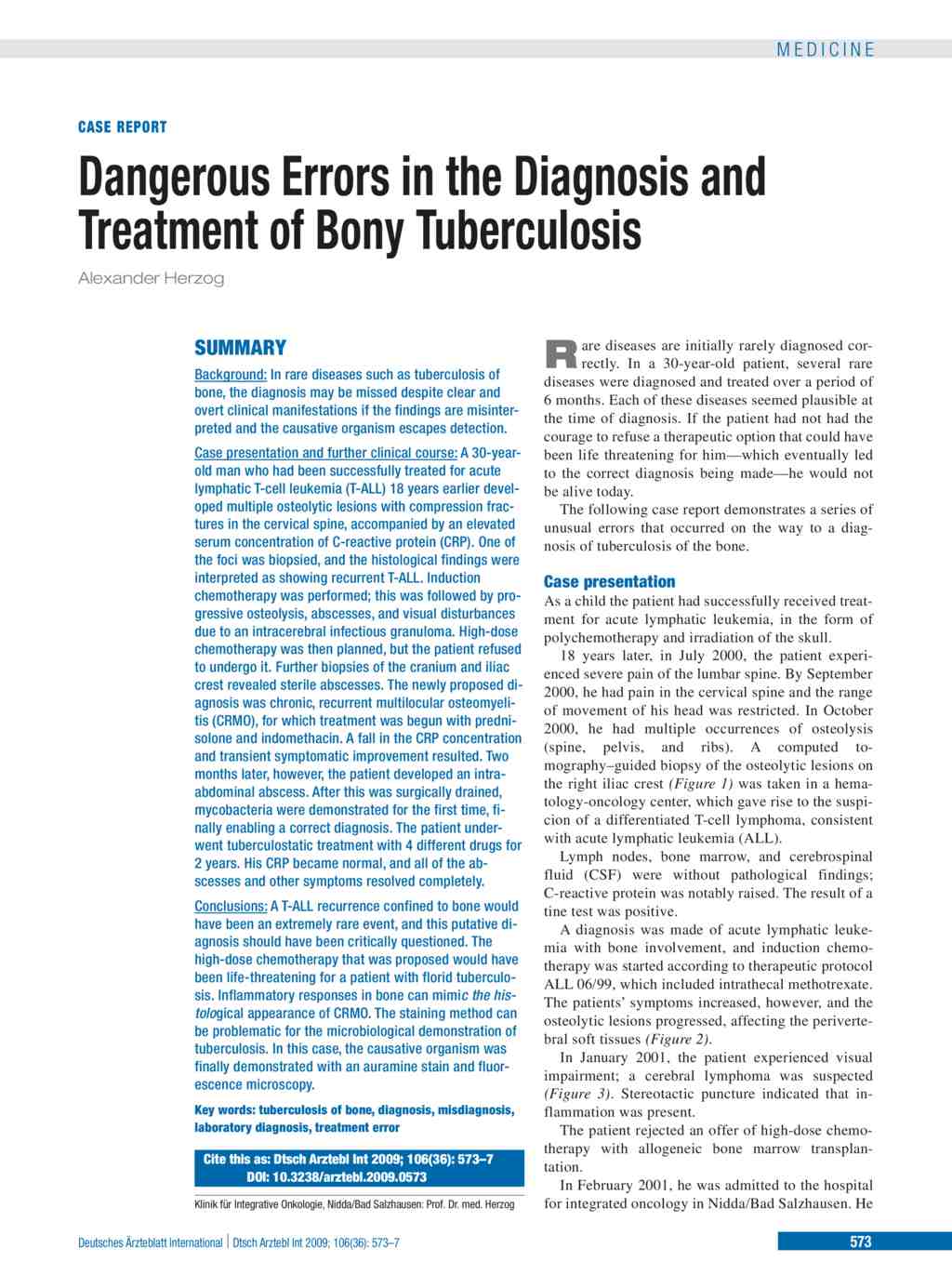