Not Such a Big Problem?

Dtsch Arztebl Int 2009; 106(40): 639-40. DOI: 10.3238/arztebl.2009.0639
Editorial to accompany the article “The Morbidity and Mortality Associated With Overweight and Obesity in Adulthood: A Systematic Review“ by Lenz et al. in this issue of Deutsches Ärzteblatt International

Background: Overweight and obesity are generally thought to elevate morbidity and mortality. New data call this supposed association into question.
Methods: The Cochrane, Pubmed, and other databases were systematically searched for a combination of relevant terms and subject headings. Meta-analyses and cohort studies based on the German population were evaluated for possible associations between overweight/obesity and adult morbidity and mortality. Case-control and cross-sectional studies were excluded.
Results: A total of 27 meta-analyses and 15 cohort studies were evaluated. The overall mortality of overweight persons (body mass index [BMI] 25–29.9 kg/m2) is no higher than that of persons of normal weight (BMI 18.5–24.9 kg/m2), but their mortality from individual diseases is elevated, diminished or unchanged, depending on the particular disease. The overall morbidity is unknown. Both obesity (BMI > 30 kg/m2) and overweight are associated with increased disease-specific morbidity for some diseases, but decreased or unchanged for others. In general, obesity confers a higher risk than overweight. Morbidity and mortality are markedly influenced by the patient’s age, sex, ethnic origin, and social status. The external validity of the comparative predictive performance (c-statistic) of BMI, waist circumference, and ratio of waist to hip circumference cannot be determined from the available analyses.
Conclusion: The prevailing notion that overweight increases morbidity and mortality, as compared to so-called normal weight, is in need of further specification. Obesity, however, is indeed associated with an elevated risk for most of the diseases studied.
Key words: overweight, morbidity, mortality, body-mass index, obesity

The question of the right body weight evidently continues to occupy people. Especially in the media and fashion world, an ideal weight has been propagated for years—for women, a weight well below a body mass index (BMI) of 18—that has nothing to do with the medical assessment of body weight and really ought to be regarded as life-shortening. An esthetic mode of perception, manipulated by the media, and commercial interests have given rise to a false ideal image of the human body. From the physician’s point of view, recommendations about optimal body weight can only be based on health-related arguments. This rather rational way of looking at and assessing body weight does not raise much enthusiasm among our fellow citizens, however, and is not much attended to. But the distorted representation of the issue in the media also makes many doctors start to doubt where the truth lies.

Against this background, the article by Matthias Lenz and co-authors contributes to a more objective, matter-of-fact assessment of overweight and obesity (1). With great care, the authors have evaluated 27 international meta-analyses and 15 German cohort studies with respect to the relationship between BMI—as a measure of body fat—and morbidity and mortality risk. This specific approach is interesting because German cohort studies are often not included in international meta-analyses, but they are particularly relevant to the German population—although it must be said that there are only a few high-quality German studies on this subject.

Obesity claims a high price
The analysis by Lenz et al. shows that overweight (defined as a BMI of 25 to 29.9 kg/m2) is not associated with higher mortality than normal weight (BMI between 18.5 and 24.9 kg/m2). However, a moderate rise in rates of coronary heart disease and type 2 diabetes mellitus was seen in the overweight category. An interesting observation, if not a new one, was that the effect of higher BMI on overall mortality becomes weaker with age, as other risk factors become more significant. In addition, BMI-associated risk factors such as hypertension, hypercholesterolemia, and type 2 diabetes are more consistently and better treated today than they used to be, as was recently shown by a study in the USA covering a period of 40 years (2).

The results of this study largely agree with the results of a recently published international meta-analysis of 57 cohort studies with a total of 900 000 participants (3). This showed that the BMI associated with the highest life expectancy was between 22.5 and 25 kg/m2 in both men and women. A BMI of 20 to 22.4 kg/m2 was even associated with the slightly higher mortality than a BMI between 25 and 27.4 kg/m2. The analysis also made clear, however, that obesity—defined as BMI ≥30 kg/m2—extracts a high price. In addition to a loss of subjective quality of life, the risk of many concomitant diseases and sequelae is higher, and statistically speaking there is also an increasingly reduced life expectancy. In contrast to the study by Lenz et al., this analysis showed an average loss of 2 to 4 years of life with a BMI between 30 and 34.9 kg/m2, and a BMI between 40 and 45 kg/m2 shortened life by an average of 8 to 10 years. By the way, smoking and diseases associated with smoking also mean a loss of about 8 to 10 years of life, which may partly explain the excess mortality in the BMI category below 22.5 kg/m2 (3).

Body mass index is not a sole indicator
Whatever small discrepancies may exist between various meta-analyses, opinion today is unanimous that BMI alone is not a consistently good indicator of health risk in overweight people, and is therefore not in itself a justification for weight loss. BMI is only a very coarse measure of body fat mass, with a correlation quotient between 0.4 and 0.7. This is why current guidelines recommend, for the BMI category of 25 to 29.9 kg/m2, looking for accompanying risk factors and to base the indication for any treatment on the overall risk. Even in this BMI group, then, there may well be a medical indication for weight loss interventions in individual cases (4). In the BMI 25 to 29.9 kg/m2 group, waist measurement is a stronger predictor than BMI itself of metabolic and cardiovascular risk (4).

Even when BMI is ≥30 kg/m2, the situation is far from straightforward. According to recent publications, individual risk in obesity can vary greatly. About 20% to 30% of obese individuals have a normal risk profile and probably do not have an increased mortality risk (5, 6). Above all, fat distribution and ectopic fat storage, e.g., in the liver, play an important role (5). Nevertheless, 70% to 80% of people with a BMI of 30 to 39.9 kg/m2 have a higher risk of comorbidity—a risk which increases further when BMI rises above 40 kg/m2. People in this category therefore derive great benefit from weight reduction (4, 7, 8).

For this reason, German doctors cannot and must not ignore the roughly 15 million Germans with a BMI of 30 kg/m2 or higher. Given the high comorbidity risk in this group, therapeutic nihilism is not appropriate. According to a recent conservative estimate, obesity is costing the German health system dear. Annual expenditure above all for the treatment of associated diseases—primarily type 2 diabetes—is about 13 billion euros (9). The real problem is that so far the German health care system has refused to accept this challenge. Obesity is not recognized as a disease: only its complications, which are really both unnecessary and avoidable, can be treated at the cost of the health insurance companies. Given the unambiguity of the data, this is an unacceptable state of affairs from the point of view both of the obese population and physicians who practice preventive medicine. 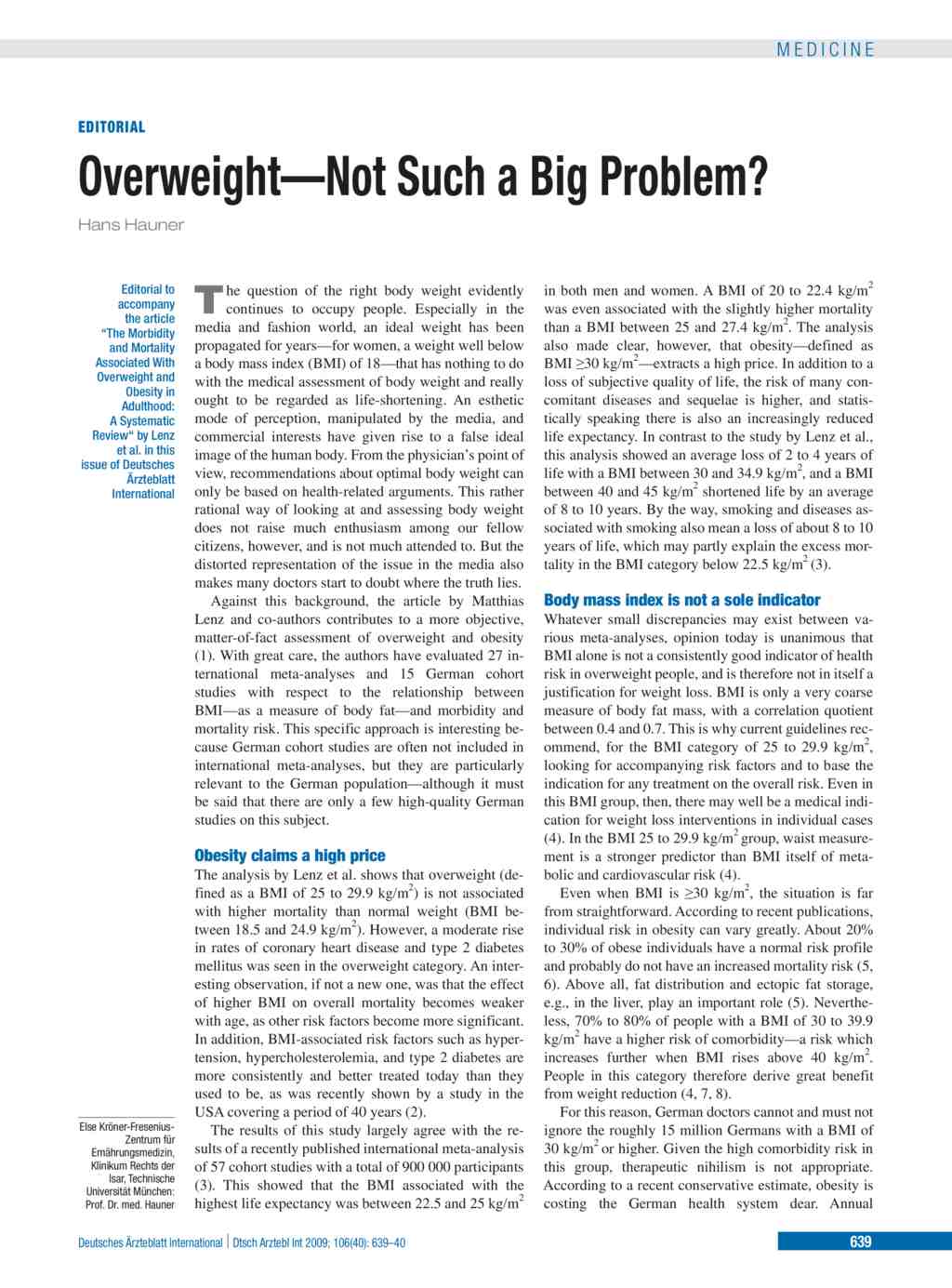