DÄ internationalArchive40/2009Growth and Puberty in German Children: Is There Still a Positive Secular Trend? Consumption of Milk as a Vital Factor in Growth Development

Growth and Puberty in German Children: Is There Still a Positive Secular Trend? Consumption of Milk as a Vital Factor in Growth Development

Longitudinal growth in German children has accelerated and final height increased since the mid-19th century. As possible causes of this “secular trend,” the authors discuss socioeconomic status, genetic factors of the somatotropic axis, growth hormone, and insulin-like growth factor-1 (IGF-1), as well as nutritional and epigenetic factors. They conclude that especially factors of early childhood diet and epigenetic regulation of specific target genes explain this secular trend. Unfortunately, their review article does not include any mention of cow’s milk and the way in which it vitally contributes to longitudinal growth. Numerous studies have shown that longitudinal growth correlates significantly with consumption of milk (1). Consumption of milk has an insulinotropic effect and, in contrast to meat, in children it raises serum concentrations of insulin and IGF-1, as well as increasing insulin resistance. Increased consumption of cow’s milk during pregnancy is associated with higher birth weight and a larger size and is thus a possible risk factor of fetal macrosomia. Compared with breastfed infants, infants fed with cow’s milk protein have higher postprandial insulin concentrations and IGF-1 serum levels. Consumption of cow’s milk shifts the somatotropic axis to an unphysiologically high range (2). Since insulin and IGF-1 materially modify the promoter function of many genes, this explains the presumed epigenetic changes that accelerate longitudinal growth. The shift of the growth hormone-IGF-1 axis and its possible “misprogramming” in early childhood as a result of increased peripartal and postpartal consumption of cow’s milk is suspected of increasing an existing predisposition for disorders with increased insulin resistance and raised IGF-1 concentrations, such as acne, obesity, diabetes mellitus, metabolic syndrome, cardiovascular disorders, and cancer (3). From a preventive medical perspective, this secular trend is of utmost importance. The milk induced shift of the somatotropic axis with induction of partial insulin resistance and resultant long term health effects should be subject to thorough further studies (2, 3).
DOI: 10.3238/arztebl.2009.0656a 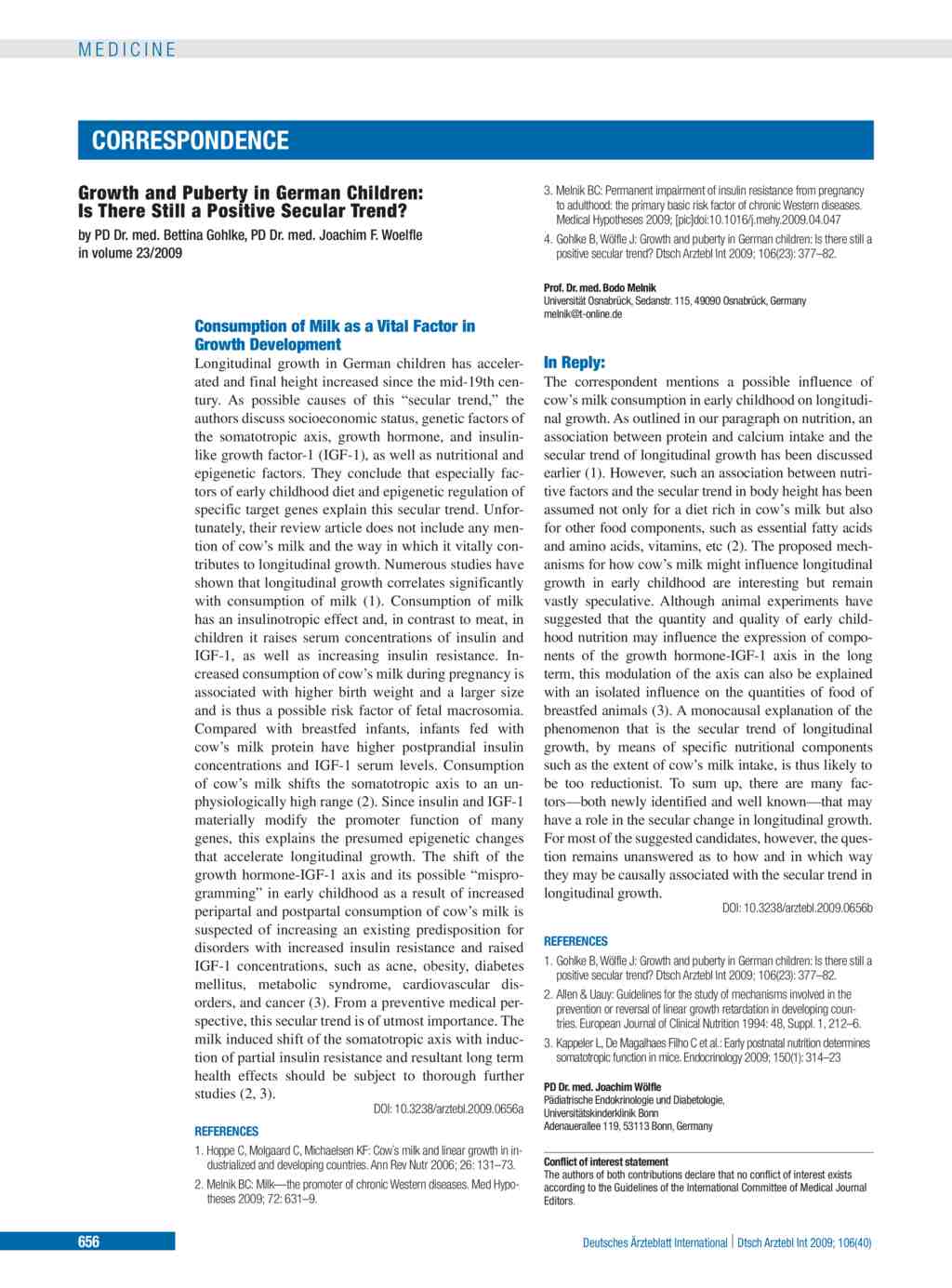