Anyone searching the scientific literature anywhere other than in a large university library soon realizes that most recent publications are available online, but at a price. Many publishers charge between $15 and $30 per article. This rapidly brings the cost of a literature search to several hundred dollars. These costs are borne mainly by researchers without university affiliations, particularly those from developing countries, while university based researchers, primarily, benefit from electronic database search facilities.

Against this background, there are increasingly insistent demands for free, unlimited access to all scientific results. Research funding bodies and state bodies argue that, since research is financed with public money, its results and the publications in which they appear should be available to all citizens. This is the primary argument of the so-called open access movement. Numerous journals subscribe to this idea. Hence for example both the German and English version of Deutsches Ärzteblatt’s medical scientific articles are available cost-free.

Publication in an open access journal also carries potential benefits for authors, relative to conventional, restricted access journals, who deny access to potentially interested parties. It is likely that open access publications are more widely read, with benefits to the reader, and the hope of easier accessibility and wider citation for the author. The following are some examples which appear to support this view.

Moed (2), however, argues that many authors published their findings on ArXiv first, and only 6 to 12 months later in a specialist journal. Using the example of several physics journals, he demonstrated that open access articles are cited earlier, but not necessarily more frequently. He criticizes many of the retrospective studies for failing to take account of this systematic error. His analysis also suggests that studies published in ArXiv are significantly more frequently the product of eminent authors. He attributes the citation advantage of open access to these two factors.

Eysenbach investigated whether open access articles published by the Proceedings of the National Academy of Science (PNAS) are more frequently cited than those with restricted access (3). He counted 1280 restricted access and 212 open access publications (14.2% of all articles) between June and December 2004. After adjusting for number of authors, impact factor of an author's publications, submission method of the journal, nationality of the corresponding author, funding body, and discipline, open access articles were cited significantly more often 10 to 16 months after publication. (Odds Ratio = 2.9; 95% confidence interval: 1.5–5.5). A further analysis after 17 to 21 months showed still greater divergence between the two groups (4) (average citations: approximately 9 versus 13). All articles published in PNAS become openly accessible after six months, hence the measured difference between the two publication modes is attributable solely to the first six month period.

Patrick Gaule and Nicolas Maystre investigated the question as to whether openly accessible articles are scientifically superior, and more frequently quoted for this reason (5). They explored possible confounders. These authors analyzed almost 5500 papers published on PNAS between May 2004 and March 2006. After 2 years, the open access articles had received significantly more citations than the restricted access ones (approximately 15.7 versus 12). After correcting for scientific productivity and reputation of the final author, the citation advantage for open access did not persist (5).

Another study by Philip Davis (6) supports the hypothesis that open access is associated with no citation advantage, or only a marginal one. He analyzed citation frequency in 11 specialist journals from the fields of biology and medicine. The selected journals offer open access publication for a charge, an arrangement which applied to 15% of the 11 000 articles studied. After adjustment for possible confounders a significant citation advantage of 17% was found for open access in the period between 2003 and 2007, but which reduced over time. While there was an open access advantage of 32% in 2004 this fell by around 7 percentage points annually to around 11% in 2007. Davis speculates that the association between open access and higher citation figures was associated with the initial phase of open access, and will recede over time.

In a retrospective case control study of 6 ophthalmology journals (Table) Lansingh and Carter found, using multifactorial analysis that only the number of authors, their country of residence, and language influenced citation frequency significantly (open access versus restricted access, 17.8 ± 23.7 versus 19.1 ± 20.31 [p = 0.73]) (7).

Randomized studies
The majority of retrospective studies conclude that open access confers a citation advantage. In 2008, Davis et al. published the first randomized study, which negated this conclusion (8). The authors randomized over 1600 research and review articles published in 11 journals of the American Physiological Society. 247 publications were openly accessible, 1372 with restricted access. Nine to twelve months after the publication date the authors calculated the citation frequency of each article as well as the page traffic and download figures. In the first 6 months after publication, open access articles were downloaded up to 89% more frequently. Review articles, press released articles, longer articles, and articles from high impact factor journals were also downloaded more frequently. Of the open access publications 59% had been cited after 9 to 12 months, whereas 63% of articles from the control group had been cited in the same period, yielding a 4 percentage point difference to the detriment of open access. A further analysis conducted immediately before publication of this study in the British Medical Journal, i.e. 15 to 18 months after the original analysis again showed no difference between the two groups. Davis’s randomized controlled study showed increased downloads but no increase in citations.

A further randomized study has reported only interim findings to date (5). Between 2005 and 2006, the Journal of Medical Genetics randomized 19 studies as open access and 104 as controls. During the 2 year observation period, the citation frequency for open access lagged slightly behind that for the restricted access publications. For the time being it remains unclear whether these data will be published in a peer reviewed journal.

Conclusions
The majority of studies conclude that open access carries a citation advantage relative to restricted access publication. However, these are mostly retrospective analyses and might be explained by selection biases. For example, it may be that researchers are more likely to make key papers open access than less important research. More recent studies have confirmed that citation advantages found for open access are confounded by factors such as the number and quality of previous publications, research funding, and the number of authors (5, 7).

This observation is supported by the only randomized controlled study to date, which also failed to find a citation advantage for open access (8). Why is it that open access publications fail to show a citation advantage? It may be because researchers who generate citations work at universities and other research institutions which allow them access to restricted access publications. If this is the case, there would be no competitive advantage for open access (9). Nevertheless, open access increases the accessibility and -dissemination of an article, as some researchers have shown, which could benefit individuals with no institutional affiliation, such as non-hospital based clinicians and physicians from poorer countries. Regardless of citation frequency, an article may well enjoy greater influence. There is probably no difference between English and German speaking journals in this regard (10).

The boundary between open access and restricted access is becoming increasingly blurred in recent years. Some publishers offer open access in exchange for a supplement, and many authors archive their publications in private or institutional websites especially conceived for this purpose. In addition, many journals can now be viewed in full text, cost free via PubMed Central. This portal allows detailed searching and free access to all listed publications. There is also political support from influential German and international institutions such as the German Research Foundation (Deutsche Forschungsgemeinschaft, DFG), the Max Planck Society, the National Institutes of Health and the UK Research Councils for the development of an unrestricted access to research articles. Research projects funded by these institutions are required to be available on an open access basis from 6 to 12 months after publication. These initiatives will also drive an increase in the practice of unrestricted publication in future.

Conflict of interest statement
The author works as an editor for the medical scientific section of Deutsches Ärzteblatt, where all articles are available without charge. 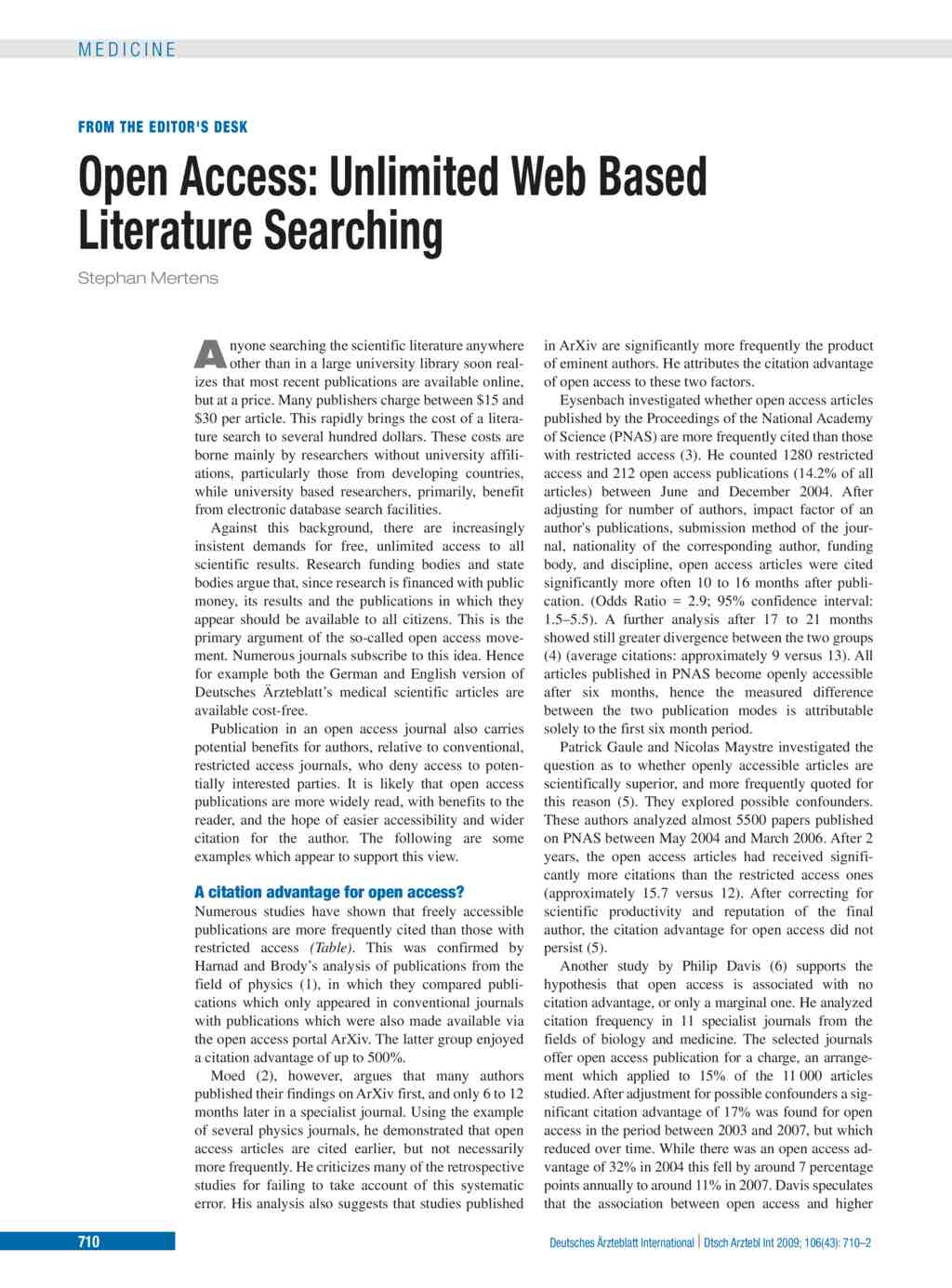