The Preventive and Therapeutic Roles of Regular Physical Activity

Dtsch Arztebl Int 2009; 106(44): 713-4. DOI: 10.3238/arztebl.2009.0713
An editorial accompanying the articles “Exercise as Stroke Prophylaxis,” by Reimers et al., and “Physical activity in the Prevention and Treatment of Colorectal Carcinoma,,” by Halle et al., which appear in this issue of Deutsches Ärzteblatt International

Both epidemiological studies and prospective cohort studies impressively document the major importance of regular exercise and physical activity for the prevention and treatment of a wide range of disease entities. The evidence supporting the positive effects of exercise is now overwhelming; it is thus surprising that this panacea is still underutilized in hospitals, residential homes for the elderly, and other health-care facilities. Its potential benefits can hardly be overstated, as hour-long sitting at work, in the car, and during leisure hours, in front of the personal computer and television set, belong to the daily routine of millions of people. Most adults exercise on their own two feet for less than 30 minutes daily (1). For many young people, in particular, it seems hard to imagine that, for millennia before the present, most people engaged in heavy physical activity several hours a day.

This being the case, it is a good thing that Deutsches Ärzteblatt International is specially devoting its current issue to the topic of exercise for the prevention and treatment of disease. Of course, the risk of stroke (2) and of cancer (3) depends on many different factors, including (among others) nutrition, smoking, alcohol consumption, and genetic predisposition. Nor can exercise or sport therapy be used as a sole treatment of disease, and sometimes exercise or sport therapy is not even possible. Nonetheless, the benefit that can be obtained from physical activity in preventing and treating disease remains inestimably high.

Muscles: more than just contraction machines
In the past, the function of a muscle was often considered reductionistically to be that of its contractile elements, alpha-motoneurons, muscle spindles, and Golgi tendon organs. The fiber composition of nerves in muscle shows, however, that a muscle is more than just a “contraction machine.” Only one-sixth of the fibers in a muscular nerve serve a motor function; the largest number (more than 40%) are sensory fibers (4). Thus, the musculature can be thought of as the body’s largest sense organ, which influences all organ systems and regulatory circuits through its complex connectivity with the central nervous system (CNS). Muscular work, for example, induces hormonal and autonomic changes that explain many of its remarkable effects on the mind and the immune system.

The comparably high percentage of vasomotor nerve fibers (ca. 40%) implies that the control and regulation of muscular perfusion plays an important role in the cardiovascular system. With regard to the control of peripheral perfusion, the immediate effects following even a single muscle contraction are striking: for example, right after plantar flexion of the foot against mild resistance, leg perfusion rises steeply and takes 15 to 20 seconds to come back down to resting values (5). Patients with peripheral arterial occlusive disease (PAOD) can thus benefit from intermittently structured exercise therapy with short working phases and low-intensity loading, which will result in increased perfusion. Muscle activity probably raises local perfusion immediately by a “peripheral feed-forward mechanism” involving mechanical effects on the vascular endothelium and vascular smooth muscle as well as rheological changes (6).

In addition to local effects of these types, exercise and sports are also known to influence vascular risk factors positively. The meta-analysis of Reimers et al. (2) very clearly reveals the tremendous preventive potential of exercise against stroke: exercise lowers the risk of cerebrovascular events by up to 40%. Very frequent, intense muscular loading is not needed for an effect to be seen, as moderately intense cardiovascular training—e.g., fast walking or cycling—seems to suffice. Furthermore, even in old age, physical activity remains highly effective and yields benefits in a relatively short time. A recently published longitudinal study (7) involving men over age 50 found that those who were active in sports had a life expectancy that was 3.8 years longer. Even previously sedentary men who began participating in sports after age 50 were able to halve their mortality within 10 years compared to sedentary men of the same age.

It seems that regular exercise also markedly reduces the probability of cancer. Though tumors certainly arise through a multifactorial process, physical inactivity is now accepted as being definitely among the main risk factors. The article of Halle et al. (3) directly connects the most common type of neoplasia in Germany—colorectal carcinoma—to physical activity in every phase from primary to tertiary prevention. The effect of physical activity on the appearance or progression of neoplastic disease is a direct one; in the case of colon carcinoma, whose incidence in western industrial countries is 20 to 60 new cases per 100 000 persons per year, it can lower the relative risk by as much as 40%. Biologically plausible explanations of this phenomenon point to the hormonal regulatory system as the mediator of the effect (8). Physicians are generally called upon to treat a disease that is already present rather than prevent it. In the treatment of neoplasia, the main emphasis is rightly placed on the patient’s quality of life. Here, too, the evidence in favor of exercise is striking: it lowers exhaustion and fatigue (9), sustains and increases physical performance (8), and has a positive effect on central organ systems (10).

Some of the commonly expressed concerns about exercise therapy for cancer patients are allayed by several publications. Dimeo et al. (11), for example, show that exercise does not reduce the effectiveness of oncological treatment, while Schmitz et al. (12) refute the notion that it makes lymphedema more common, and McTiernan’s data (10) show that it lessens the frequency of unfavorable metabolic changes that are common among cancer patients.

Benefit versus profit?
Regular exercise is one of the more effective and inexpensive measures that can be undertaken to prevent or treat many different types of disease. This being the case, one may ask a critical question: Why is this form of therapy used so rarely? Could it be because economic interest and incentives are lacking for the comprehensive and widespread use of “exercise therapy”? In contrast, the omnipresence in the media of advertisements for “healthy food,” and for diverse pharmaceuticals, suffices to show that much more money can be earned by purveying these products. 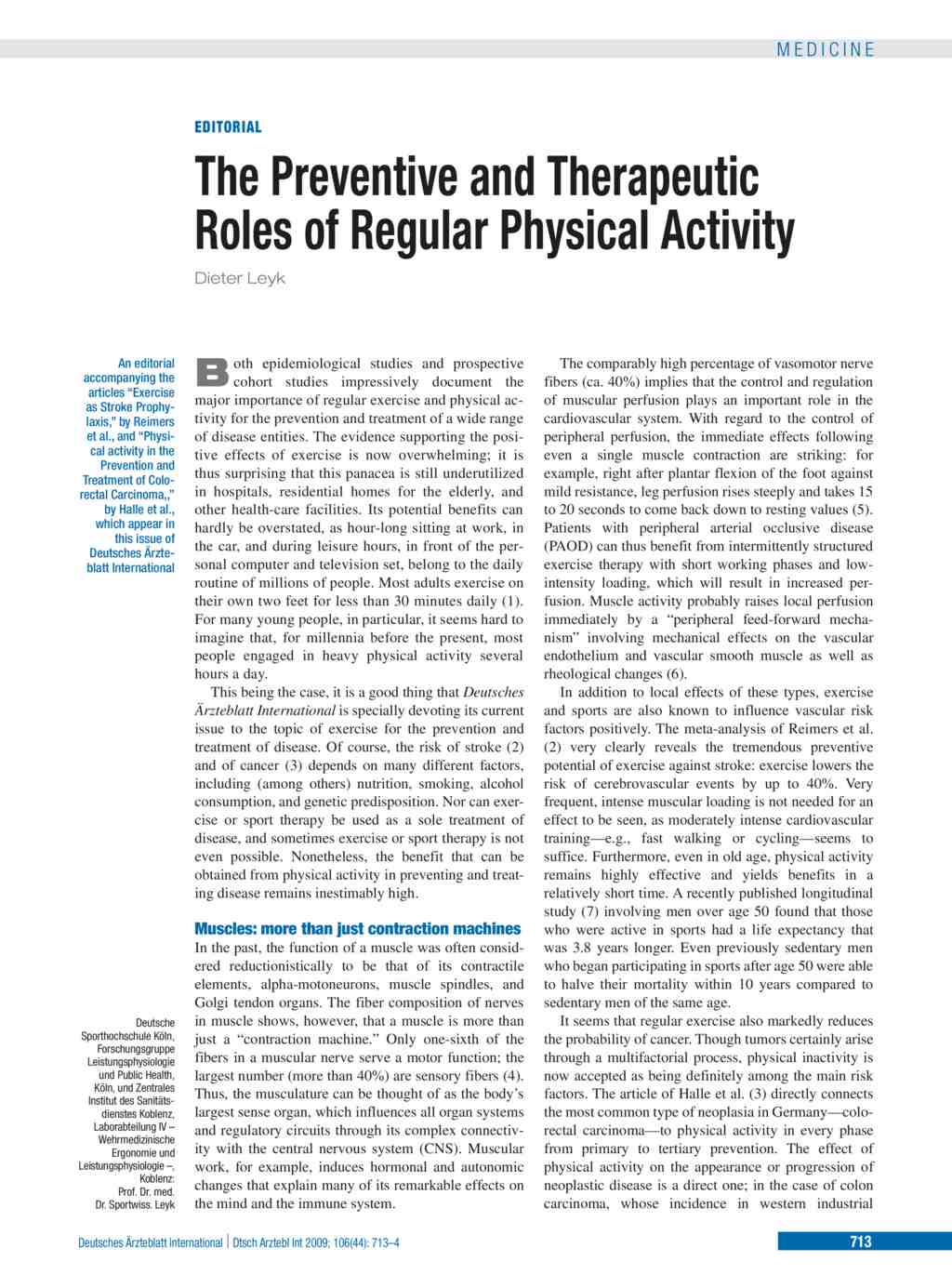