In only 5 months’ time, Vancouver will be the center of the Winter Olympic Games. Last September, this city on the picturesque west coast of Canada also became the capital of medical publishing. More than 400 attendees from 35 countries arrived to take part in the 6th International Congress on Peer Review and Biomedical Publication—the largest meeting of its kind, even if only a small fraction of the 15 000 medical journals in the world were represented.

Editors and researchers discussed all aspects of medical publishing, from instructions to authors to registers of controlled studies. I shall review a few studies of particular interest to the readers of medical journals. They relate to the roles of authors, reviewers, and editors.

Authors
Unjustified naming of authors (“honorary authorship”) and suppression of names of authors (“ghost authors”) have long been a problem for scientific periodicals (1). In an author survey carried out more than a decade ago, Annette Flanagin and her co-authors found honorary authors in about a fifth of all articles published in six American journals. One in ten publications had an author who had collaborated in the work but was not named in the publication (2).

Joseph Wislar and colleagues at the Journal of the American Medical Association, JAMA, now repeated this classic study with an anonymous online survey of authors publishing in the six leading general medical journals. In the year 2008, 26% of all articles were reported to have an honorary author, while just on 8% had a ghost author—for research articles, the figure was 12%. In the New England Journal of Medicine, for example, every tenth article had a ghost author, and in 15% of articles an author was listed who did not fulfill the criteria of authorship.

Since the study depended on self-reporting, and 30% of those approached did not answer, it is conceivable that the numbers of honorary and ghost authors are actually even higher.

The importance of ghostwriting to the pharmaceutical industry, as an example, was shown in a case study carried out by Lisa Bero and Jenny White of the University of California, San Francisco. They retrospectively reviewed more than 1000 internal documents (3) that had been made public in connection with a court case against the drug manufacturer Parke-Davis. In 1996 and 1997 the company had undertaken a publication campaign with the aim of broadening the indication of the anticonvulsive gabapentin beyond the scope of the official license. In this campaign, researchers with an established reputation functioned as “guest authors” of texts that had been commissioned by Parke-Davis. According to Bero and White, 11 of the originally planned 24 publications appeared in the target medical journals. None of them made any disclosure of the drug company’s role in the composition of the manuscripts; only two mentioned financial support from Parke-Davis in a general way.

Reviewers
Peer review remains an error-prone process. This general opinion was confirmed by Gwendolyn Emerson of Seattle and her colleagues after they gave two versions of a fictional study to 200 reviewers for two orthopedic journals. The two manuscripts were identical except that the main finding was positive in the one and negative in the other. Almost all reviewers (98%) recommended publication of the positive study; notably fewer recommended publication of the negative one— in one journal, only 71%, although the negative result had the same scientific value. In addition, the reviewers found more of the deliberate mistakes introduced by the authors in the presentation of the negative study.

Despite this, at the present time there seems to be no alternative to peer review, not just for journals such as the Deutsches Ärzteblatt International, but also for funding bodies such as the German Research Foundation (Deutsche Forschungsgemeinschaft, DFG). According to a study by Sara Schroter and colleagues, finding reviewers is becoming increasingly difficult even for institutions like these. In this online survey, to which 28 organizations in 19 countries responded, there were additional problems with punctuality and the quality of the reviews. Various attendees at the congress therefore called for more academic reward to accrue to reviewers, in order to improve the peer review process.

Editors
Editors did not come off scot-free at Vancouver either. In a survey by Victoria Wong and Michael Callaham of California, 86% of the editors-in-chief of various medical journals declared themselves confident in their knowledge of publication ethics. However, many of them failed to give correct answers when faced with sample problem editorial scenarios: Only 18% knew how to handle plagiarism correctly, 30% how to deal with questions of authorship, and only 15% were able to give an appropriate solution to problems about conflict of interest.

Altogether, the Vancouver congress confirmed the impression that a scientific article is not necessarily to be believed merely because it has appeared in a peer-reviewed journal. True, one should be even more skeptical towards non-peer-reviewed journals, but even the peer-reviewed ones should be read with a critical eye. There is room for improvement in all parties—authors, reviewers, and editors. With all their faults, however, medical journals are still the most successful and most important medium of communication for physicians. Medicine is a journal-based culture, and education and research are unthinkable without journals. 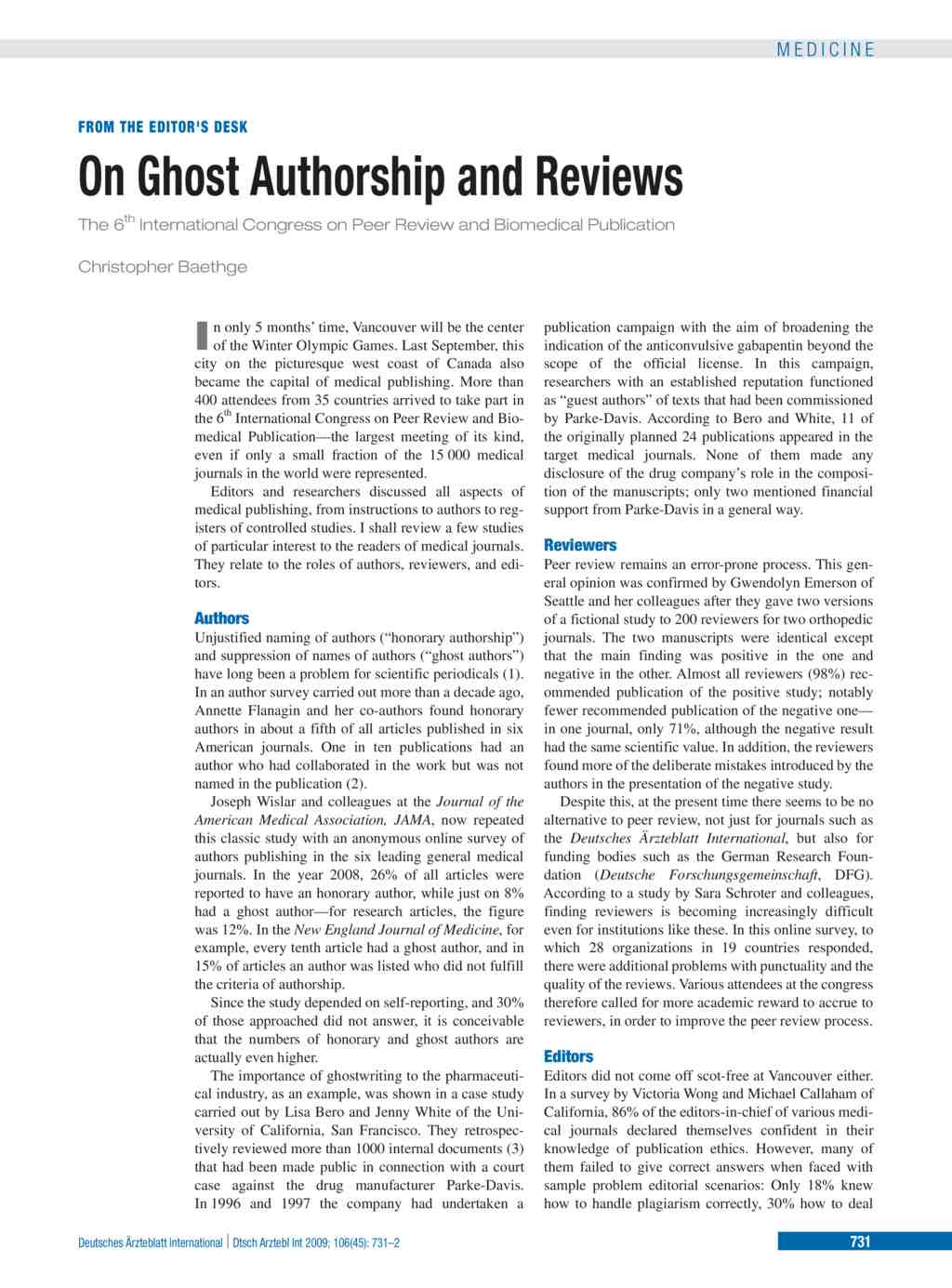