DÄ internationalArchive46/2009The Pathophysiology, Diagnosis and Treatment of Constipation: In reply

The Pathophysiology, Diagnosis and Treatment of Constipation: In reply

I thank my colleagues for their interesting correspondence. Chronic constipation is a very “old” topic that has been the subject of countless hypotheses—many unproved, some proved, and numerous proved wrong (1). A CME article in Deutsches Ärzteblatt is -restricted—mainly for reasons of space—to points 2 and 3. I have actually never come into contact with untested procedures, and I omitted these for this reason. Uhlemann mentions reflex therapy of the soles of the feet, for which no clinical proof of efficacy exists.

Schmiedel rightly writes that patients with constipation who have enjoyed the advantages of laxative therapy do not develop normal behavior at stool once the medication is stopped. He concludes that laxatives have the potential to cause dependence. Since, however, laxatives represent symptomatic and not causative treatment of constipation, constipation is not likely to disappear after longer term laxative use—in the same way that chronic heart failure is not cured after medical treatment. But even so, to my knowledge nobody has ever claimed that ACE inhibitors have the potential to cause drug dependence. The potassium concentration is always lower in plasma than in serum. This is not associated with constipation or laxatives. Magnesium is a poorly absorbed ion that can be used as a saline laxative (see Table 2 in my article). There is no reason to assume that this depends on the blood concentration of magnesium. Whether magnesium is the easiest method to treat constipation is debatable, or, rather, for the patients to decide.

Wirz comments, correctly, that the Rome criteria are not perfect. Currently, however, I am not aware of a better instrument that is available. I cannot follow the remarks on constipation during treatment with SSRIs, nor can I find these in the cited literature. -Serotonin is assumed to have a prokinetic effect via 5-HT4 receptors, and blockade of the 5-HT3 receptors can result in severe constipation. Inhibition of serotonin reuptake from the synaptic gap would thus only result in an improvement of the constipation, but such an effect is not clinically relevant. Opiate induced constipation is undoubtedly an important topic within pain therapy, but it affects only a proportion of patients with constipation and thus did not merit any more space in the article.

This is underlined by Zerbe’s letter. The items in my list of possible interventions in opiate-induced constipation caused by opiates were not ranked by order of importance. Comparisons between them are lacking; and as far as I am aware the same is true for data on tilidine/naloxone. The fact that opiate antagonists as a therapeutic principle are not mentioned in the medical textbooks is likely to be due to the fact that the relevant studies were published only in 2008 (2, 3).

Holsteg mentions MRI defecography, for which some literature exists. However, I did not find the cited methodological comparison among the 6 articles by Weishaupt that were listed in PubMed. On comparing conventional defecography and defecography obtained by open magnet MRI—in a sitting position, not a lying position—the authors conclude that in diagnosing -rectal intussusception, defecography is still the method of choice (4).
DOI: 10.3238/arztebl.2009.0767 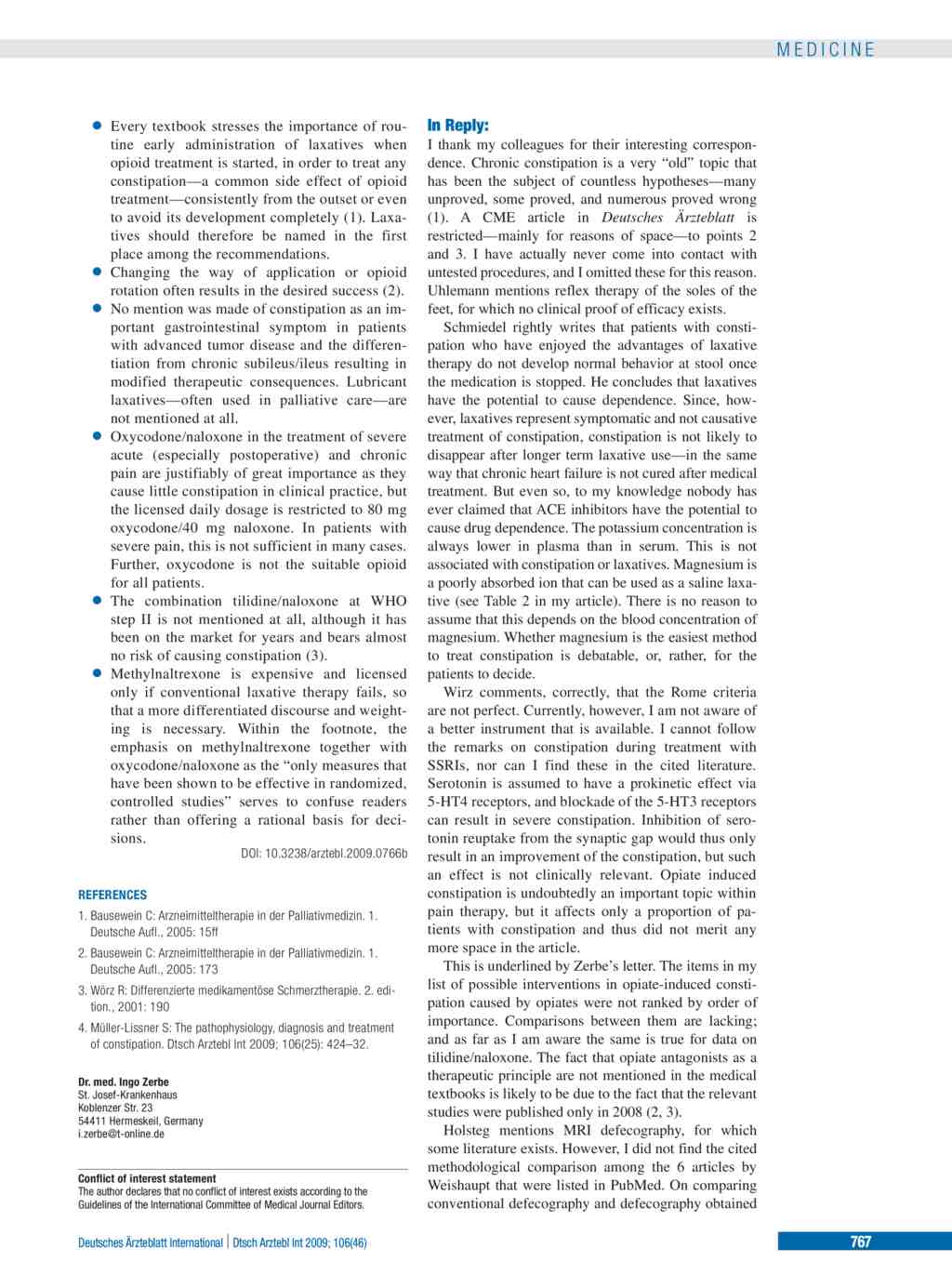