The most recent epidemiological weekly reports from the Robert Koch Institute show that the swine flu epidemic is now spreading with increasing speed in Germany too. The number of new cases in the country is more than doubling every week—in some states (Länder) it is even faster. This has become clear not just from the statutory notification data, but also from the data emanating from the Sentinel system run by the Working Group on Influenza (Arbeitsgruppe Influenza). The following facts are particularly notable: First, the influenza activity is beginning earlier than we are used to seeing with seasonal flu. Second, in the laboratory-confirmed cases the patients are infected almost exclusively with the novel influenza A (H1N1), not with seasonal influenza strains. Third, in by far the larger number of cases now, infection is autochthonous.

In addition, the numbers of patients requiring hospitalization and who have a severe illness ending in death are also increasing. This development indicates the start of a qualitative change in the course of the epidemic in Germany, just as was seen much earlier in other countries, such as the USA, the UK, and France.

The article by Winzer et al. is the first report on retrospectively evaluated data from a large clinical cohort of patients infected with the novel influenza A (H1N1) in Germany, starting from the beginning of the pandemic. The authors give an exemplary description of the beginning and course of the first, non-seasonal months of the epidemic, in which the infection was reported first in travelers from South and North America, then in people returning from holidays in Spain. They also describe the implementation and success of rigorous containment measures, including in the initial phase, especially in Düsseldorf, inpatient admission under quarantine conditions. In addition to epidemiological data, comprehensive information about the manifestation, symptoms, laboratory test parameters, course, and treatment were obtained. Many infected individuals remained without symptoms, and most of those who became ill became only mildly so. No cases of severe disease requiring intensive care were observed.

A publication by Kumar et al. (1) gives a very different picture. This gives the results of a multicenter observational study of a Canadian cohort over the same time period. Those affected were primarily young, female, and of native ethnicity (Indian, Eskimo), without serious underlying disease. A history of lung disease and smoking and clinical findings of hypertension, diabetes, and obesity were the main comorbidities. About one-third of the 168 patients who were critically ill and in intensive care required special ventilation regimens, in some cases even extracorporeal membrane oxygenation; 49 (17.3%) died. Of 50 children, 4 died (8%). A substantial number of patients suffered bacterial complications, usually due to S. aureus or S. pneumoniae. Compared to seasonal flu, notable findings were gastrointestinal symptoms, dyspnea, and purulent sputum.

The Canadian authors particularly emphasized the medical-logistical and social-ethical implications: even before the normal flu season, the intensive care facilities were nearly completely taken up by patients infected with the novel influenza A (H1N1). An -increased wave of infections such as one might expect at this time of year would—or indeed will—pose a challenge to the (limited) high-tech intensive care facilities in our healthcare system too, and one such as it has never seen before. So far Germany has succeeded, by a variety of hygiene measures, to keep the wave of the epidemic fairly “flat.” The aim of these efforts was to keep a lid on any epidemic/pandemic until a vaccine was available.

The article in this issue by Mikolajczyk et al. on the modelling of infectious diseases attempts to explain the principles upon which calculations are made about the courses of epidemics. The contribution does not contain any specific prediction about the novel influenza A (H1N1), but the basic principles of course apply to any influenza epidemic. 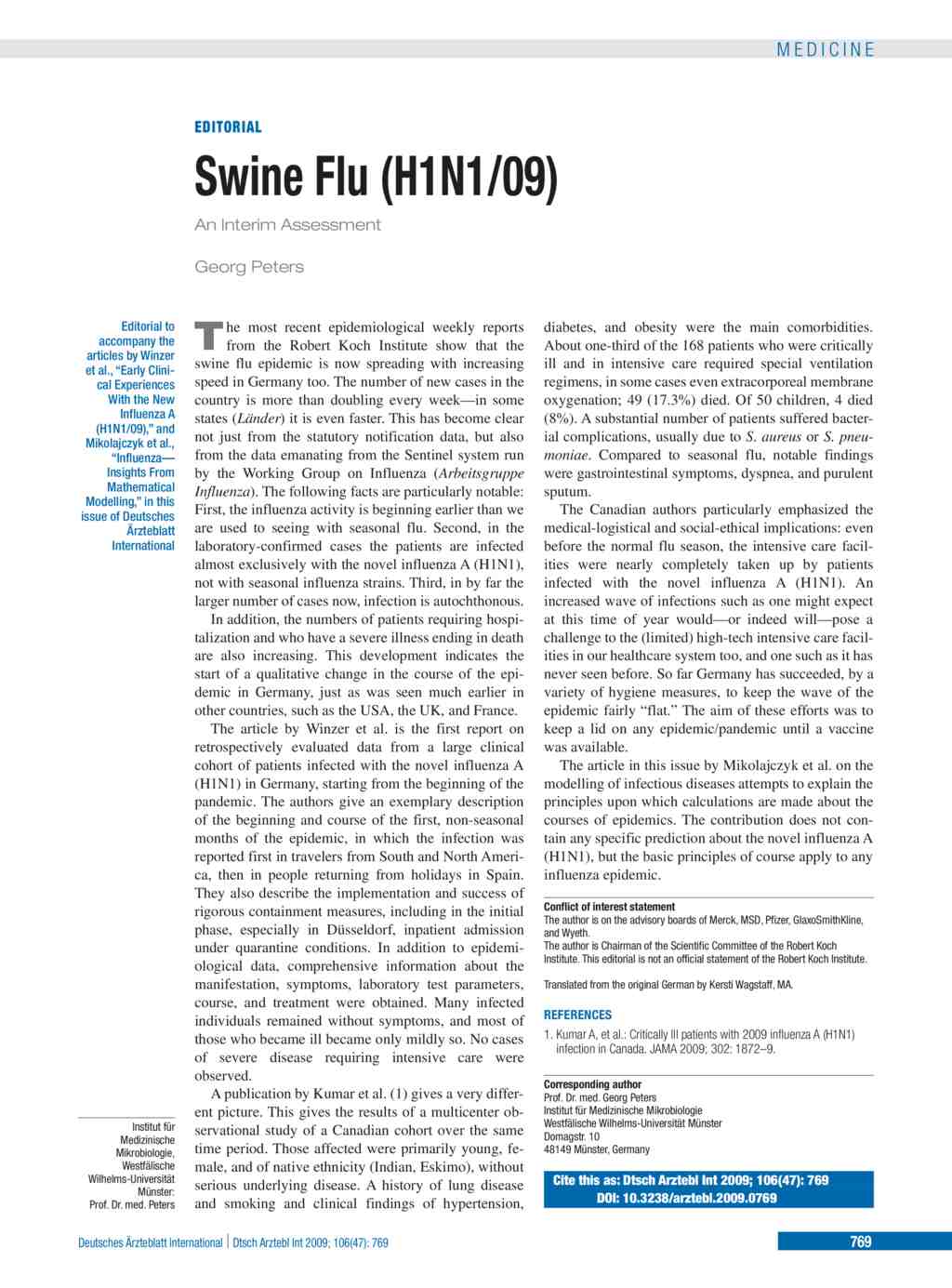